Harmony of style – The Bluewater Grill is a classic fish house, down to the last detail 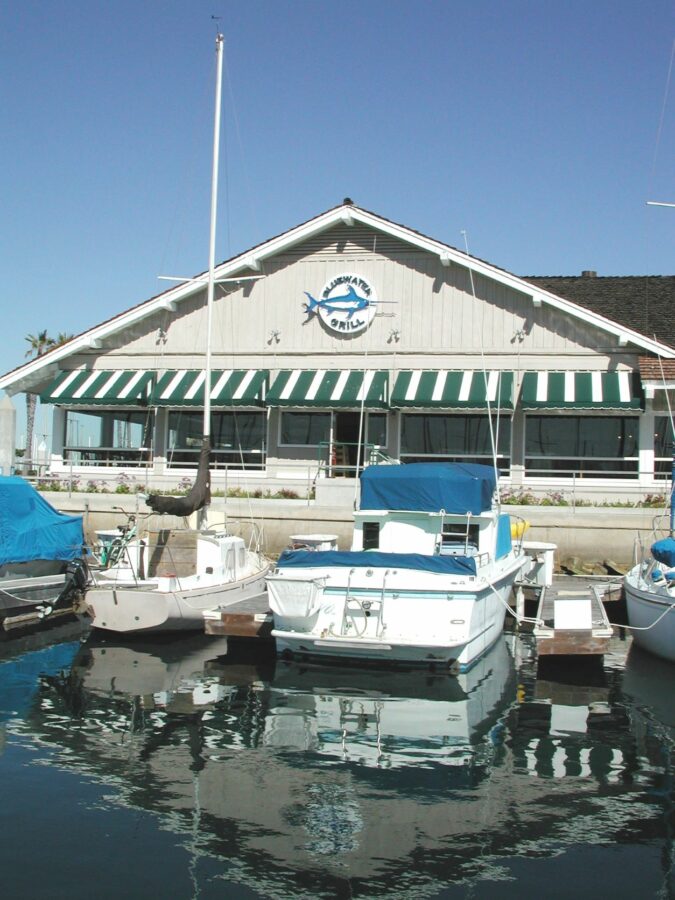 The Bluewater Grill’ views reinforce its seafood theme from inside, and outside. Photo by Kevin Cody 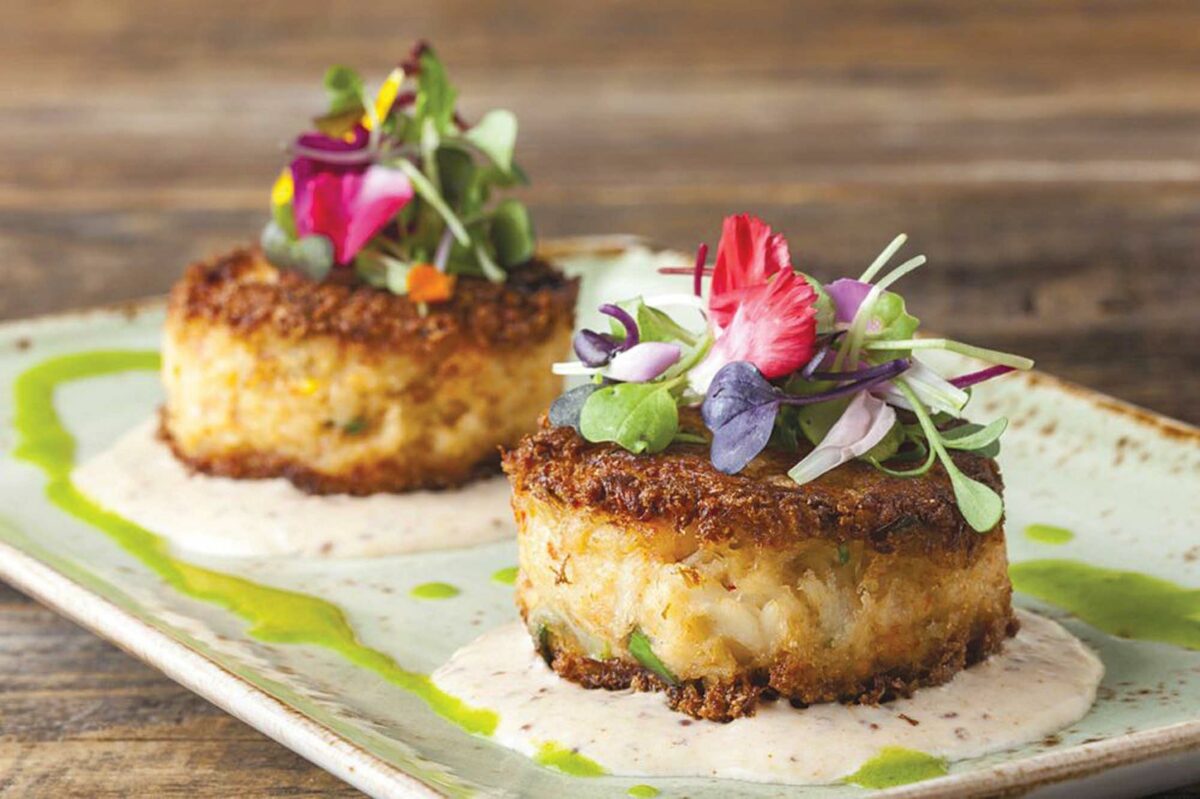 The Maryland-style crab cakes were made with high-quality crab and topped with an array of micro-greens. Easy Reader file photo

Restaurant designers have plenty of strategies to choose from, one of which is theming the décor around the menu. I’ve been to vegetarian places plastered with images of tomatoes the size of basketballs, steakhouses with cows on the open range, a barbecue place decorated with piggy banks and a larger-than-life effigy of Porky Pig. That last one was a bit unsettling, but the others all enhanced the sense of total commitment to a cuisine.

The most effective merger of place and ingredient, though, is the classic fish house. Close your eyes and imagine it, the timbered structure reminiscent of wooden boats, pictures of fishermen hauling nets and anglers with their rods and reels, perhaps a few stuffed marlin or tuna on the walls. Now open your eyes, and if you happen to be at the Bluewater Grill not much will change except that the boats are real – that’s a window, not a picture frame.

The Bluewater Grill celebrated their second decade in October of last year. Longtime residents will remember the building they inhabit was previously Castagnola’s Lobster House. The space was a bit retro when it was built in the 1980s, and has the patina of well-maintained age. Many diners won’t actually see the interior because the outdoor patio was popular even before Covid made many wary of indoor spaces, but from many seats the view of the marina is delightful.

I reviewed this location shortly after they opened, and much of the menu is the same grilled and fried seafood that they served back then. But it hasn’t been completely static, and the improvements have been for the better, particularly when it comes to the vegetables and sides. They’re changing with the times, but being picky about what elements of modernity to adopt.

One of the successful additions is the grilled Spanish octopus with crisp potatoes, smoked paprika aioli, chimichurri, and pickled onion. Octopus doesn’t have a distinctive flavor, but is an effective platform for grill char, smokiness, and the sauces it’s served with. When cooked correctly the tentacles have a pleasing crisp texture at the ends, and a soft meatiness in the thick parts. They nail that here. The pickled onions had a sweetness and spiciness that complemented the potatoes and seafood, and the only thing I’d change is asking for the sauces on the side so they might be enjoyed individually.

I preferred this starter to another more traditional item, the Maryland-style crab cakes. These were made with high-quality crab and topped with a pretty array of micro-greens, but were on the small side, and didn’t have the Old Bay seasoning that is the traditional spice around the Chesapeake. Instead, they were served over remoulade and scallion oil, which I like individually but didn’t think were an entirely successful pairing. I did dab at the remoulade with some of their excellent sourdough bread, which arrives at every table as soon as you’re seated.

That bread also went very well with their chowders, of which they offer both the New England white and an unusually spicy Manhattan red. The tomato-based sauce had a hit of red pepper over a base of seafood and herbs, and reminded me of a Mexican seafood soup. That’s not at all a bad thing, just not what I expected. The New England chowder was the classic well-executed, buttery and creamy with plenty of clams and a background flavor of dill and other herbs. A waterfront seafood place needs a good chowder, and Bluewater delivers.

Bluewater Grill also offers an old-school item that isn’t often seen on local menus — crab and shrimp Louie. This salad of greens, seafood, and hard-boiled egg with a mayonnaise and chili sauce-based dressing seems to date from 1908 in San Francisco, and I can’t imagine why it’s not more popular. The richness of seafood and liveliness of fresh greens is great with the tangy dressing, which has dashes of Worcestershire sauce and chopped green onion. The original doesn’t include avocado, which the version served here does, and it’s a worthy addition.

On recent visits we tried three mains, the fried fish platter, sand dabs, and blackened local swordfish with dirty rice and mango salsa. The fish platter includes shrimp and small scallops in a seasoned panko batter and cod filets in a beer batter, and all were praiseworthy. The seafood comes with French fries and a hefty portion of a lightly dressed, and fresh coleslaw. It’s a massive meal. My wife and I split the Louie salad, and this entrée, and were quite satisfied.

The swordfish was nicely cooked too, the blackening seasonings savory rather than tongue-searing, but though the dirty rice had a nice flavor it arrived lukewarm, and unappetizing. As it happened, I had also ordered a side of goat cheese grits that are usually served with the seared sea scallops, so we had an alternate side. Unfortunately, this too was a letdown, because the goat cheese had a faint flavor, and the grits didn’t have much else going for them. A more robust cheese, and perhaps a bit of garlic, and herbs would have made this much more successful.

My wife had ordered the sand dabs, a fish I usually don’t prefer, but they were a surprising hit. Sand dabs have a mild buttery flavor, and often arrive overcooked, and mushy, but here they were firm and perked up by the caper beurre blanc sauce. They arrived with simply steamed, fresh spinach and some slightly odd scalloped potatoes. These usually are cooked in a casserole to a lasagna-like texture, but Bluewater’s were loose in a creamy sauce with no top crust. They weren’t what we expected, but they weren’t bad.

The Bluewater Grill has a decent wine and cocktail list, but we decided to enjoy a much older tradition, and share a pitcher of the house rum punch. The mix of rums with passion fruit liqueur, pineapple, orange juice, and orgeat was refreshing and went remarkably well with the meal. Dessert was offered too, a choice of mud pie, crème brulee, and key lime pie, but on both visits we had filled up on savories and had no more room.

The prices at the Bluewater Grill are moderate for a seafood house in a prime location, with most starters between $10 and $20 and entrees priced between $20 and $30. It’s an affordable date night spot, or just a place to enjoy a bite watching a sunset, and worth a visit for those who appreciate good food in a harmonious environment.