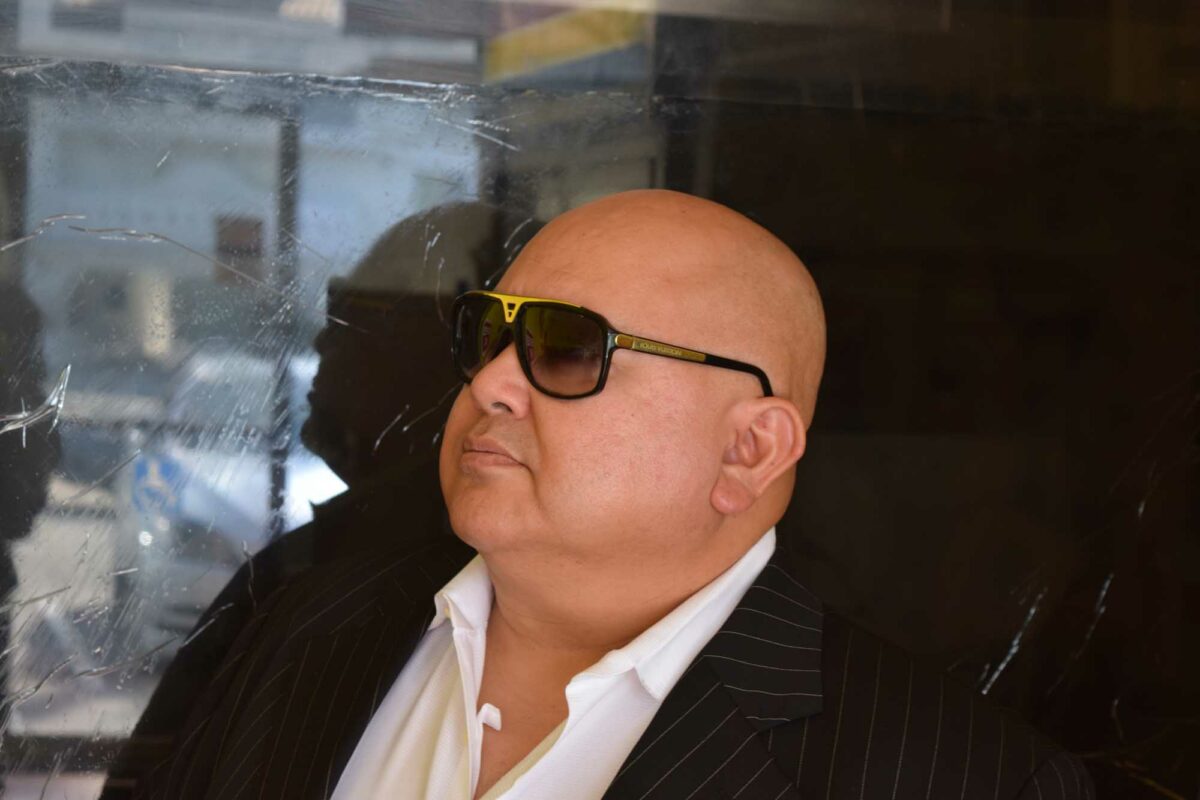 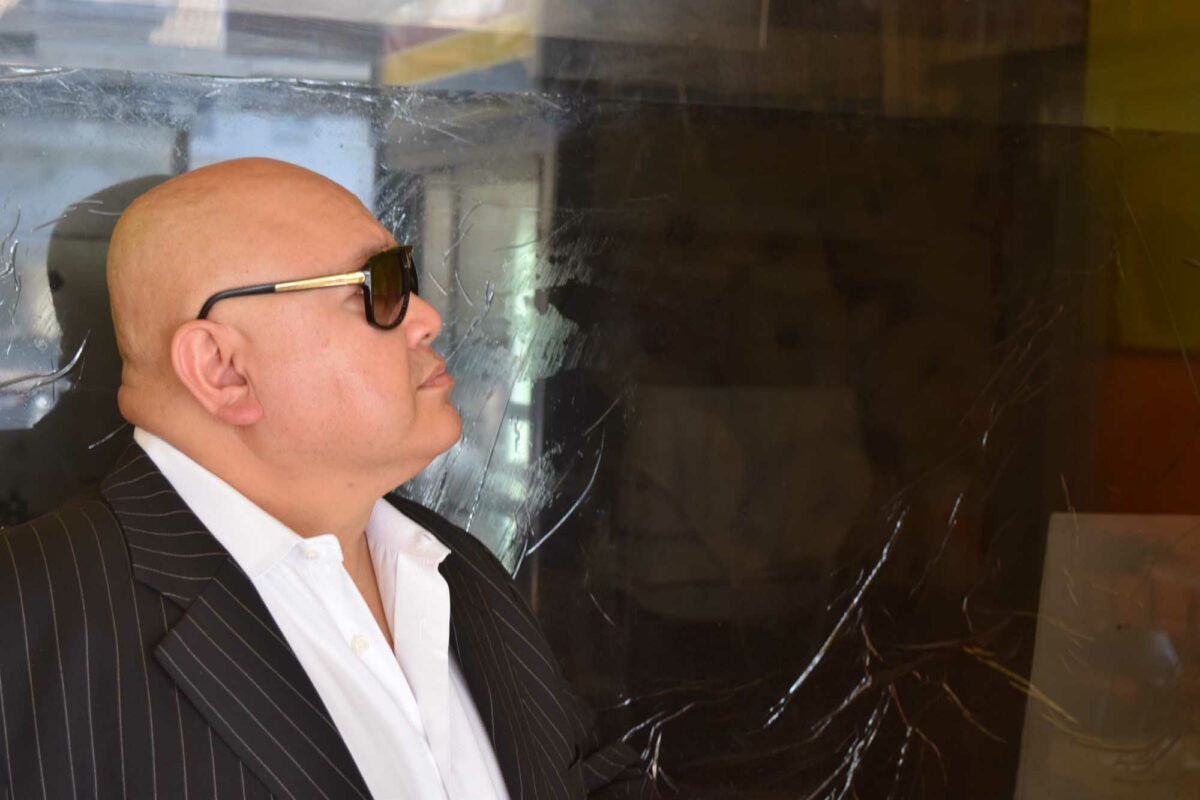 The South Bay isn’t at a loss for accomplished musicians, and this newspaper could highlight one every week. Among those, I’ve found particularly intriguing is Hermosa Beach resident Ray Zepeda, whom I met a few years back, not long after the release of his saxophone-driven debut CD, “Step by Step,” on Redondo Beach-based Soundsketch Records. The album combined originals and covers (by Victor Young, Johnny Green, Billy Childs, and Frank Loesser), all of them in the jazz idiom.

Zepeda’s newest record has a title that almost sounds like what you’d find at the top of a Ph.D. thesis: “Re-Imagining Milton Babbitt: A Centennial Celebration for an Exceptional American.” It too is on Soundsketch Records.

“This is not solely my album,” Zepeda points out. “This is really a Bakersfield New Music Collective album,” a medium-sized ensemble founded by Zepeda and which he serves as artistic director. As he writes in the album’s detailed liner notes, “my stated mission of the ensemble is to present exceptional, uniquely American art that inculcates our values, celebrates our identity, inspires us, and enhances American life and, in so doing, to work to form a society wherein such art may thrive.” 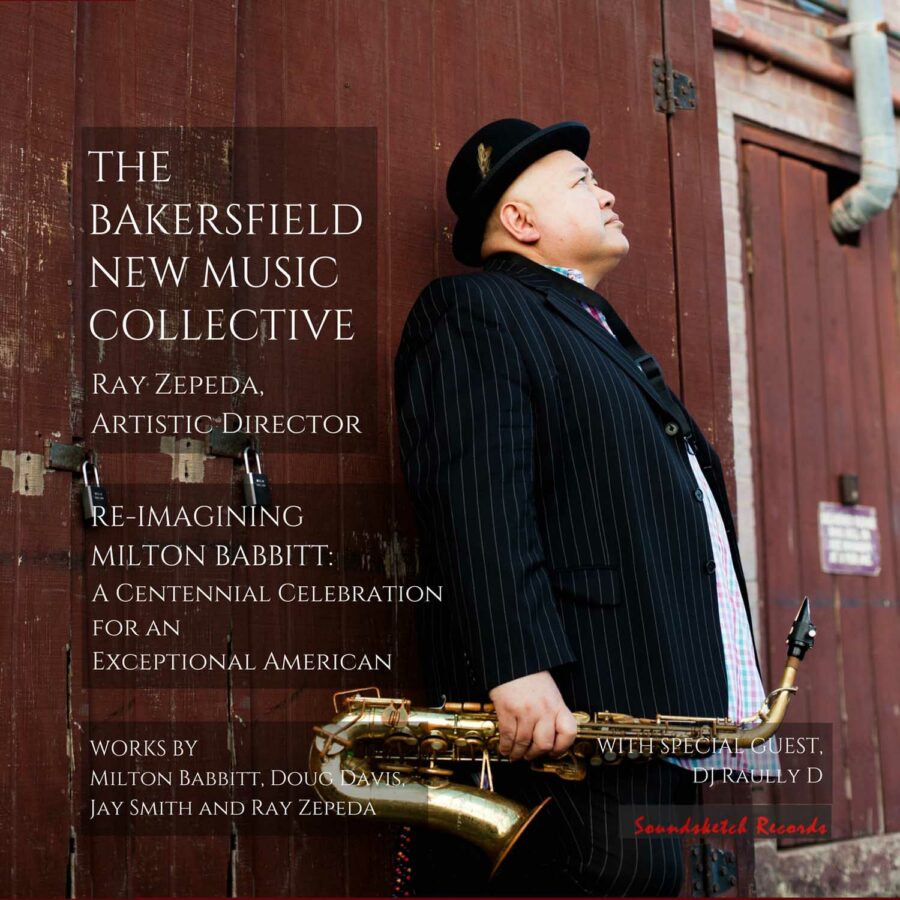 The cover of “Re-Imagining Milton Babbitt: A Centennial Celebration for an Exceptional American,” performed by The Bakersfield New Music Collective. Photo by Gulnara Khamatova

The album was recorded last January before a live audience at The Mark in Bakersfield.

“So, my name’s on the bill,” Zepeda continues, “but I really wanted it to be more about the folks in the Collective itself than about me, even though I’m kind of driving the direction of it.”

The new recording, Zepeda says, “represents for me my three-and-a-half year stint (from 2010 to 2013) in Bakersfield due to job market conditions. During that time the Bakersfield musical community took me in and opened up a lot of opportunities that have been impactful for my music career.

“In fact, the first album would not have happened without that impetus, and this (new album) came out of it. And, it being the 100th anniversary of Milton Babbitt’s birth and the fact that I had the composition, “I Care If You Listen,” in my back pocket, I decided to resurrect it for this.”

Zepeda’s composition, subtitled “A Critic’s Response to Just Artistry,” is dedicated to Babbitt and “is at once a parody of and a tribute to his ‘All Set’ for jazz ensemble from 1957… The aforementioned parody is a titular one, referring to Babbitt’s 1958 article in High Fidelity whose editor gave the unfortunate title, ‘Who Cares If You Listen?’ Babbitt’s submitted title was ‘The Composer as Specialist,’ and the text was originally a Tanglewood lecture entitled ‘Off the Cuff.’”

And who, exactly, was Milton Babbitt?

A mid-century, avant-garde composer (1916-2011) who was noted for his serial and electronic works. Initially, he was intrigued by the music of the Second Viennese School (Arnold Schoenberg, Alban Berg, and Anton Webern most famously), and he wrote articles on 12 tone music. Babbitt spent time at Princeton, first on the faculty of the mathematics department and later on the faculty of the music department. In 1973 he joined the music faculty at Juilliard and among his students were Stephen Sondheim, Frederic Rzewski, Tobias Picker, and Stanley Jordan. That’s quite a mix if you think about it.

To a fair extent, “Re-Imagining Milton Babbitt” is comprised of riffs on the work of the composer and also music inspired by Babbitt’s theories and compositions. A tribute, to compress it into the easiest of explanations.

“And so,” Zepeda says, “this is giving back to the community which was so good to me, and also what I hope to achieve is to bring to national attention the level of artistry that exists in this cauldron of creativity in Bakersfield. It’s kind of a right-leaning center of oil and agriculture, and people don’t know about this other aspect of Bakersfield. So that [was my goal] in addition to bringing attention to Milton Babbitt and his importance in the American new music landscape in the 20th century.” The new record clearly isn’t for every taste, but after a couple of listens it comes together and reveals the depths of its originality and complexity. Apart from highlighting a few of Babbitt’s compositions (such as “Philomel,” “My Ends Are My Beginnings,” and “Vision and Prayer”), the CD features work by Doug Davis and Jay Smith (both members of the Collective) as well as Zepeda himself (the latter’s “Shattered Glass on the Beach” reveals his disdain for the postmodern minimal school: Fine by me, but I still enjoy Philip Glass, Steve Reich, and John Adams). Special guest mash-up artist DJ Raully D blends the works by way of his live ad-lib remix, and it’s a kind of icing on the cake.

Zepeda says he cherry-picked the A-list players in Bakersfield, and there’s no doubt he’s surrounded himself with some key musicians. “If you live in the New York or Los Angeles bubbles,” he says, “you would never think that anything like this could ever exist in the land of Merle Haggard and Buck Owens. But it does.”

(Bakersfield, with its Buck Owen’s Crystal Palace, has long been a center of country music.)

There are no immediate plans to bring The Bakersfield New Music Collective down to the South Bay, but it would be a treat if Zepeda could arrange that.

In the meantime, Zepeda often gigs locally with Flowbis as well as Mind, Body & Soul, whenever the latter comes to town. He also heads to New York City every three or four months and performs there, and back at home he’s been recording, arranging, and producing South Bay artists Fred Labunikher and Bill Higgins.

There’s a second solo album in the works for Zepeda, although he doesn’t appear to be in a rush to put it out. He’s a musician who seems to take his time, and when he’s ready then he’s ready and not before. As far as that goes, when he’s ready with a new project I’ll be in line to hear it.

Re-Imagining Milton Babbitt: A Centennial Celebration for an Exceptional American, by The Bakersfield New Music Collective, is available from Soundsketch Records. For information and booking, contact Ray Zepeda: rpzepeda@earthlink.net or go to rayzepeda.com.