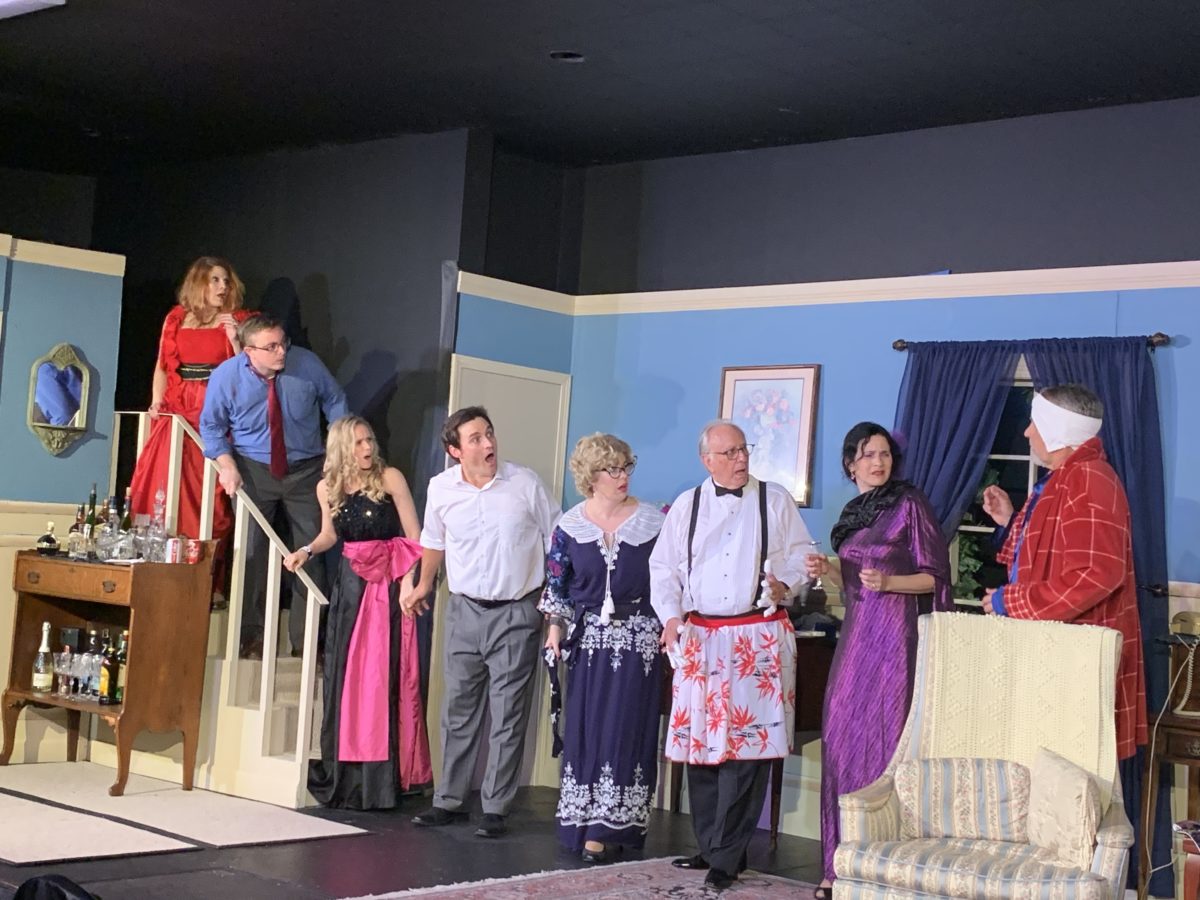 They’re having an affair in Hermosa Beach

The party’s about to get started, or is it? Charlie Brock and his wife Myra are commemorating their 10th wedding anniversary and the first couple to arrive, Chris Gorman (Marquel Skinner-Rogers) and her husband, Ken (Drew Rogers), find something askew. Charlie has shot himself (was it a suicide attempt?) and Myra is missing. The Gormans are frantic; that’s how Neil Simon’s farce begins, and it doesn’t let up. This is comedy on steroids.

Brock is the Deputy Mayor of New York and the action is set entirely in the Brocks’ Snedens Landing townhouse near the Hudson. We never actually see Charlie, and neither will most of the other guests. Chris wants to phone the police, but Ken, who is Charlie’s lawyer, doesn’t want a scandal. He tells her to call Dr. Dudley instead but then forces her to downplay the injury. Ken’s panic and his dispensing of misleading information will only increase as other couples begin to arrive. 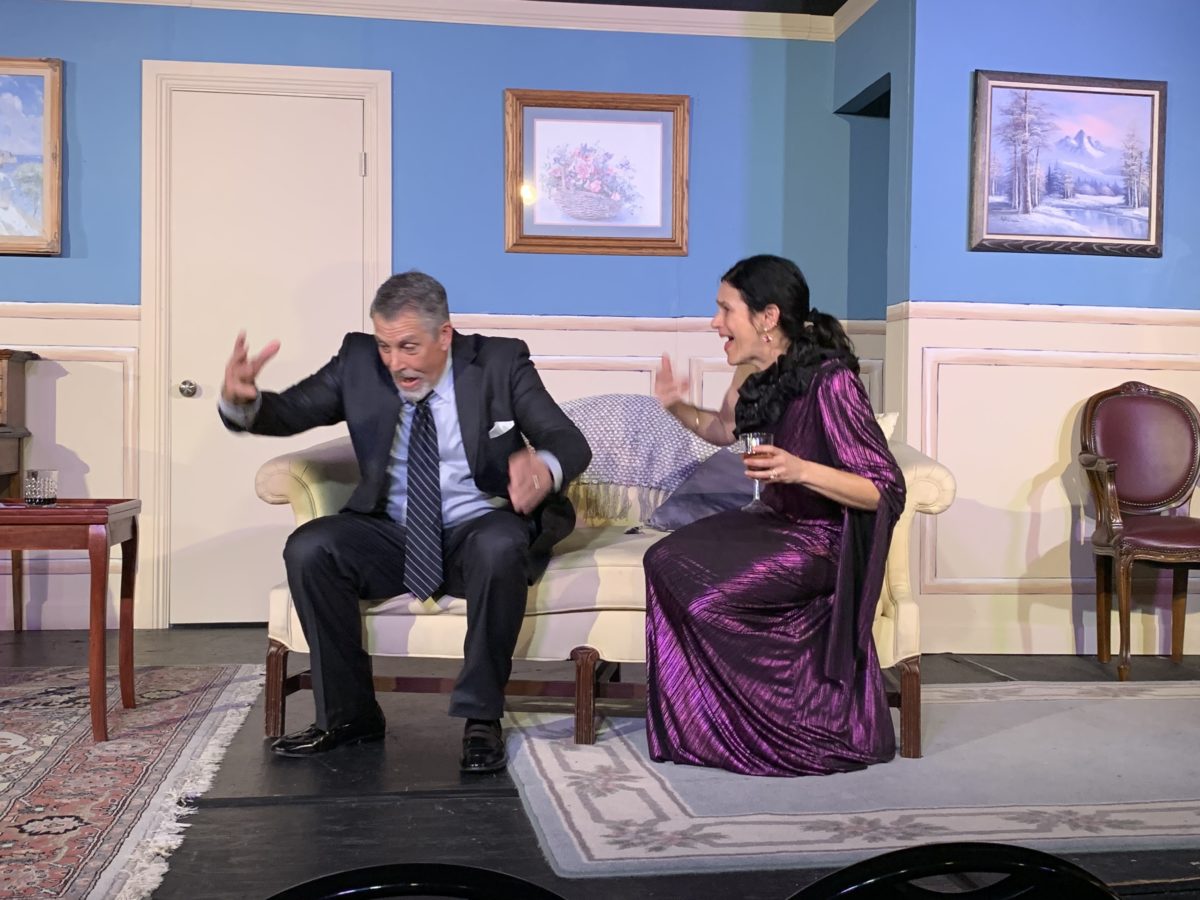 The first to do so are Claire and Lenny Ganz (Jessica Plotin and David Brown), their brand new car having been broadsided on the way over. Despite being reassured that nothing is amiss, that Charlie and Myra are simply upstairs and getting dressed, the Ganzes have their suspicions. This may be the most compelling part of this production, because the humor is indeed humorous and Plotin and Brown handle their lines with convincing ease. I mention this here because as Simon introduces more characters our attention and focus are increasingly divided among them so that from individual characters we end up with a busy, extravagant ensemble.

The Ganzes also have a stretch of dialogue about alleged sexual affairs that their friends and acquaintances are having. It’s all hearsay, of course, but it’s at the heart of the rumors that give the play its title and underlying theme. 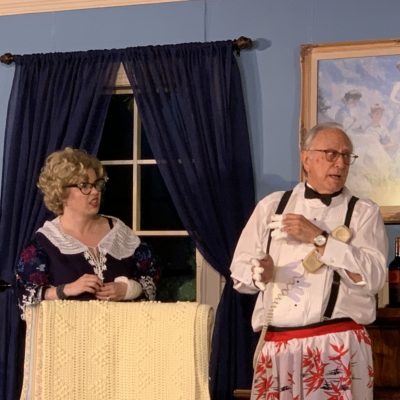 The third couple, Ernie and Cookie Cusack (Mitch Feinstein and Jennifer Dellapina), add more colorful confusion to the mix, especially the somewhat dramatic Cookie, star of her own cooking show. But, since physical humor gives a boost to clever repartee, especially in farce, her periodic back spasms complement Lenny’s whiplash from the car accident. As for Ernie (and an injury is coming his way as well), he’s a noted psychologist who’ll soon be mistaken for the butler by the last couple to show up, Glenn and Cassie Cooper (Christopher Yearwood and Sabrina Guyll).

Glenn’s campaigning for State Senate, but Cassie is convinced he’s cheating on her and she’s tossing invisible daggers at him from the moment the two of them walk in the door. Cassie’s reliance on her crystals ensures that we don’t take her too, too seriously.

It should be remembered that Gary Hart’s Democratic presidential candidacy was derailed by rumors of his “womanizing,” which The Miami Herald verified as true back in 1987. I’m not sure if Simon, who premiered “Rumors” in 1988, was in part inspired by that revelation. As we know regarding the current occupant of the White House, a loose morality can get a free pass.

At any rate, that’s now eight actors, with two more yet to come in the second act, but at this point, with the small stage as busy as a subway platform during rush hour, one might feel like the best course of action is to stop the play and move the entire audience down the hall and across the corridor into the larger theater. “Rumors” needs a lot of breathing room, and staging it in an intimate venue must have meant confronting and largely overcoming a fairly big challenge. 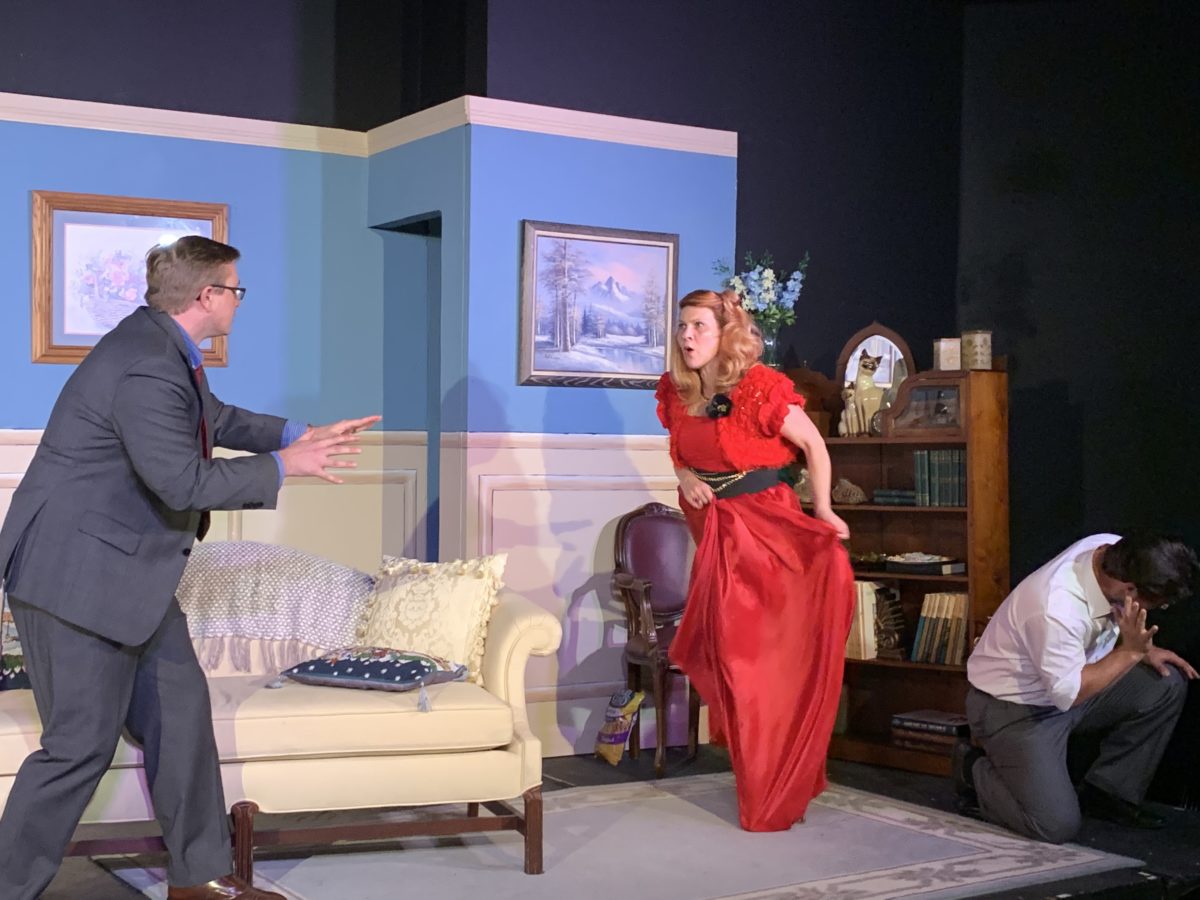 Although Simon’s funny zingers never flag, the comedy circus teeters on the edge of absurdity. The playwright certainly wasn’t holding back when he wrote this, and before any gag or routine can get old he pops in a new one, such as a second gunshot, which is triggered accidentally but temporarily deafens Ken so that he misinterprets the conversation around him. This makes for some easy laughs which start to get tiresome just before he regains his hearing. 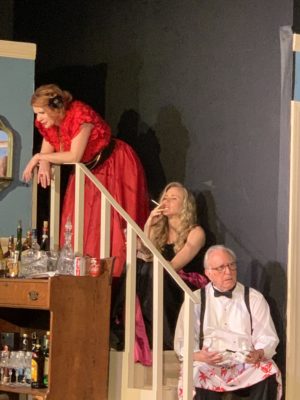 Finally, the police do arrive, Officers Welch and Pudney (Bob Baumsten and Nancy Fleming), and Baumsten gives a nuanced performance that comes as a breath of fresh air. Just as all seems lost, Lenny Ganz is enlisted by the others to pretend he’s Charlie Brock. His late inning explanation is actually a showcase of a monologue that emerges like a dazzling guitar solo in a song where it’s least expected. At the end of it Officer Welch confesses that he’s impressed by the story even though he doesn’t believe it. And, with that, the police officers leave. Lenny’s friends are amazed at this impromptu, elaborate tale, but then there’s a little twist as the play winds down and some of us may wonder, Does Lenny know more than he lets on?

If you scratch most comedies you’ll find some serious kernels inside, and one of them here might have to do with taking responsibility. Especially true is that no one wants to incriminate him- or herself. And, of course, there seems to be a finger wagging at the dangers of gossip.

Mostly, though, “Rumors” is out to entertain and, because Simon was a genius in his profession, to dazzle us with wordplay and comeback lines. However, there’s not much subtlety here with regards to the acting (kind of like large print type), which is one reason why the characters can be played to the point of caricature and no one may notice. If this were straight theater, Guyll and Dellapina (not to single them out) would be dragged by the ear to the rear of the stage door.

This production has a varied and very good cast, all in all, and it succeeds on two key fronts. One, the actors maneuver their way convincingly about the narrow stage, and two, they’ve got their timing down. In other words the ensemble seems well rehearsed and so we’re the recipients of a truly professional show. Much of the credit, I’m sure, goes to director Katie Kirkpatrick. The play will probably be even tighter as it moves into its second and third weekends. 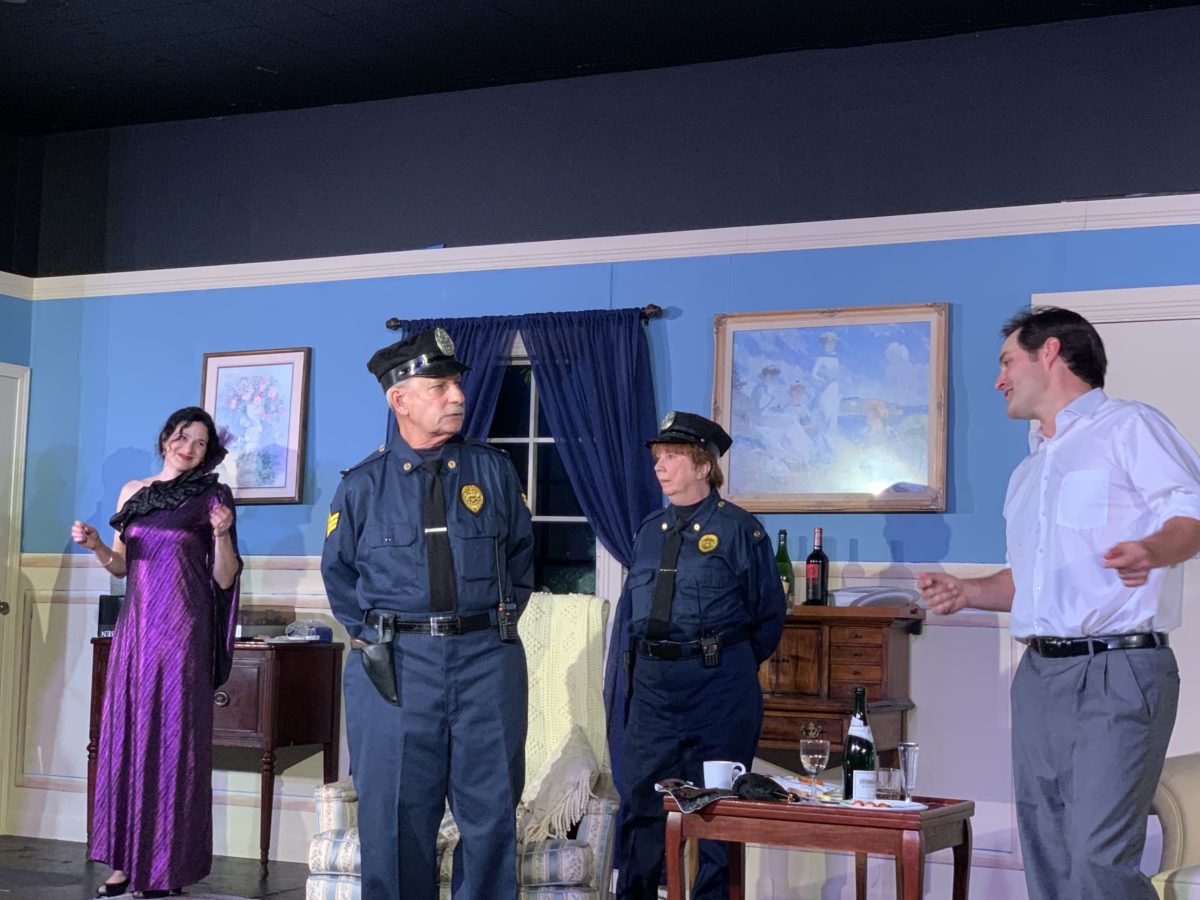 If there’s any real criticism here, it’s that “Rumors” is a little large for this venue, as mentioned above. But also, the company might up its reputation a notch if it undertook more contemporary, and more thought-provoking material. Locally, theater is pretty unadventurous, which is why Jack Messenger’s attempt to bring fresh work to the South Bay is laudable and should be encouraged. Furthermore, this isn’t some hamlet in the midwest. There are many superb actors in our midst happy to engage with challenging work.

In the meantime, Surf City Theatre has delivered “Rumors” and it makes for an amusing and entertaining afternoon or evening. The company has come quite a ways in less than a decade and they have the potential, under the leadership of Lisa Leonard and others, to accomplish bigger and better things in the years ahead.