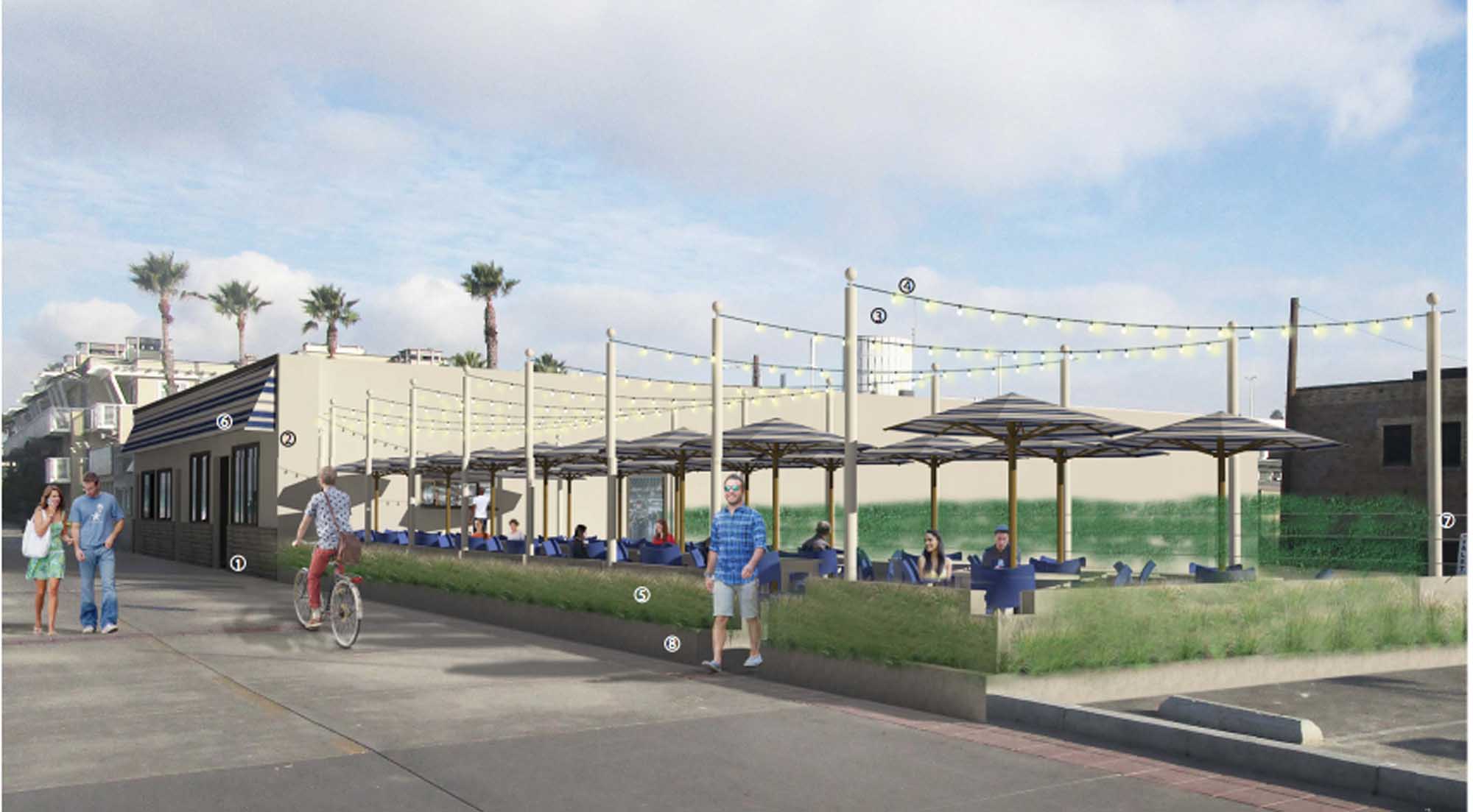 A rendering of a proposal for an outdoor dining patio in the parking lot at Slater’s 50/50. Rendering by Kelly Architects

A plan to expand outdoor patio dining at the restaurant Slater’s 50/50 on Pier Plaza has been temporarily held up out of concern about its impact on coastal views, a dispute that echoes looming concerns over the proposed Strand & Pier hotel and retail development.

The Hermosa Beach Planning Commission approved a plan from Slater’s, which sits on the site of the former Mermaid at the Northeast corner of Pier Plaza, at its May meeting. The proposal would allow for 774 square feet of new outdoor dining space and was agendized to be approved by the City Council the following week.

But the plan drew the ire of coastal view advocates, who feared that umbrellas proposed for patio tables could obscure sightlines of the Pacific Ocean and horizon from Pier Plaza. The council agreed to hold a fuller discussion, tentatively scheduled to take place at next week’s Tuesday night meeting.

“Even if they are folded down, they are going to really block the view,” Dean Francois, a Hermosa resident and Sierra Club representative, told the council.

Although the complaints were focused on the view-blocking potential of the umbrellas with the current occupant, the concerns echo long-term concerns about plans for the site presented by the property’s owner, Bolour Associates, which is currently in the midst of the planning process for Strand & Pier, which would include the area where Slater’s now sits. More public hearings on the project are expected later this year.

As with the Slater’s plan, coastal view advocates have criticized Strand & Pier for what they say would be an obstruction of views of the Pacific from Pier Plaza; unlike the umbrellas at Slater’s, which could theoretically be folded up and taken down when not needed, the alleged obstruction at Strand & Pier would be structural and enduring. Representatives from Three6ixty, a development services company working on both the Strand & Pier and Slater’s proposals, have denied that the Strand & Pier plan would impermissibly block coastal vistas, and have said that roof decks at the hotel, which will be open to the public, would in fact create new view opportunities.

Slater’s proposal would not change the amount of “activated” square footage in the restaurant, because they have already closed off an equivalent amount of indoor dining space. If approved, the patio would close by 11 p.m.  And although the expanded patio would take up more space in the existing parking lot, under Slater’s proposal it would technically not reduce the number of available parking spaces, currently 25, because the restaurant would employ a full-time valet parking service that would allow for double parking. (The equivalency of valet-managed tandem parking was questioned by Councilmember Hany Fangary, one of the council members who voted to bring the proposal back for more discussion.)

The council’s vote has pushed the patio’s opening past the start of summer, when the restaurant had hoped to begin service. Slater’s president Michael Nakleh wrote in a letter to the city that the desirable patio seating is needed to maximize traffic in the busy summer months, to help the restaurant make it through valleys in tourism.

“As you all know, restaurants in Hermosa Beach survive the winter months on sales from the summer months. As a second summer approaches if the patio is not approved it will be very hard for us to make it through another winter season,” Nakleh wrote.

Part of the difficulty that council members and commissioners grappled with is that the jurisdictional authority of either body to regulate coastal views is not clear.

Hermosa does not have a coastal view ordinance, and City Attorney Michael Jenkins told the council that the commission acted properly. Because the commissioners did not deem the impairment significant enough to fall under the California Environmental Quality Act, considering view issues would have been outside of their purview. Hermosa also lacks a certified Local Coastal Program, which means that state Coastal Act issues, including view impairment, are evaluated by the California Coastal Commission.

But Councilmember Jeff Duclos, a former alternate Coastal Commissioner, pointed out that PLAN Hermosa, the city’s General Plan updates passed in 2017, does contain language protecting the coast, and voted to bring the Slater’s plan up for discussion.

“At some point here, we need to start bringing our ordinances in line with our General Plan. If you look at it here, and it’s attached, it says public views and vistas are important,” Duclos said.

Hermosa is still in the process of updating its zoning ordinances to comply with the goals laid out in PLAN Hermosa; Community Development Director Ken Robertson said that the new language is likely to come before the council within the year. Jenkins’s response to Duclos, though, indicates that the process likely won’t resolve every potential issue.

“The question is really, is there an impairment if a person is standing at one particular place and happens to see some umbrellas? It’s a debatable question,” Jenkins said.