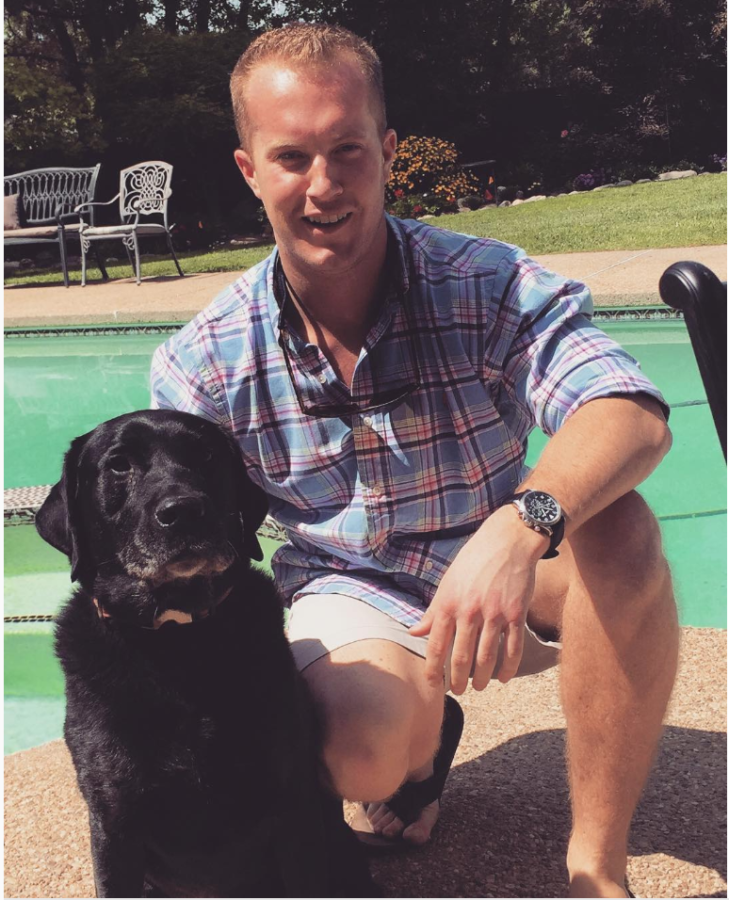 Kris Meyer was in the Tower 12 restaurant on Pier Plaza in Hermosa Beach this past weekend when a man he did not know approached him. The man, a military veteran, said that several years ago his dad, living in Maryland, had died suddenly. The veteran was overcome with grief and overwhelmed at the prospect of planning the funeral. That’s when Taylor Meyer, Kris’ son, came in, the veteran said: he helped organize the reception and paid for it out of his own pocket.

Taylor Meyer, a 27-year-old Hermosa beach resident, was killed while vacationing in Mexico last week. His death is under investigation by authorities there, and one man has been arrested in the killing. His grieving parents, Kris and Krista Meyer, came to Hermosa from their home in Claremont on Saturday for a vigil near the Pier that attracted about 200 people, Kris said.

Throughout the evening and at the gathering at Tower 12 afterwards, Kris heard lengthy testimonies to his son’s character. All of them seemed consistent with the son he had raised, Kris said, but many of them, like the story about paying for the funeral, were new to him.

It spoke, he realized, to the humility that had always been a part of Meyer’s character. And it made him turn to his daughter Megan with a piece of advice.

“I said, I know you’re capable of the same, but I don’t want to find out about it this way. I don’t want to outlive you. You guys go ahead and keep those things to yourself,” Kris recounted.

Meyer was in Playa del Carmen in the Mexican state of Quintana Roo for a friend’s 30th birthday. Among them were several friends from Sigma Alpha Epsilon, the fraternity Meyer had pledged at the University of Colorado, Boulder, where Meyer graduated and whose sports teams he passionately supported.

A Department of State official confirmed that Meyer was killed Nov. 9 in Playa del Carmen, a popular tourist town on the Riviera Maya about halfway between Cancún and Tulum. The U.S. Consulate in Merida is coordinating with investigators, but local authorities are taking the lead.

A spokesperson for the public prosecutor’s office in Cancún, which is overseeing the initial investigation, said that Meyer’s body was found in a public street in the early morning hours by a passerby, who contacted police. The spokesperson said she could not provide details about how Meyer had died. Meyer’s father said that the consulate had told him that his son was stabbed.

The public prosecutor’s office said that one man has been arrested, and provided only the arrestee’s first name, Hilario. Mexico’s criminal justice system differs slightly from that in the United States, but the spokesperson said that there had been a probable cause determination by the public prosecutor, and as of Wednesday morning Hilario was in custody awaiting further proceedings.

Meyer and his friends were staying at a house booked through short-term rental website VRBO. Kris said that his son had been a careful traveler. He had given his parents a copy of his  passport, contact information for friends also on the trip, and that they had received a text from their son when he arrived in Mexico.

Meyer’s body was found in an area that was at least a 30-minute walk from the rental house, Kris said. According to the spokesperson for the public prosecutor, it is a densely populated part of Playa del Carmen’s downtown, but distant from any areas frequented by tourists. He did not have identification or a wallet when found, Kris said, and his body was identified by linking a credit card receipt in his pocket to his passport photo through his participation in the State Department’s Smart Traveler Enrollment Program. An autopsy was performed Tuesday, and the results are pending.

Meyer’s family said that the consulate had warned them about stories circulating among Mexican media outlets, some claiming that their son had been found with drugs on his person. Kris said he believed that this was the result of Mexican government officials trying to protect the region’s tourism industry, and that he hoped the FBI would get involved in the investigation.

A spokesperson for the FBI’s Southern California Field Office said that the bureau will occasionally get involved in investigations of deaths of U.S. citizens abroad, but that involvement usually comes following a formal request of the agency with primary jurisdiction. The spokesperson was aware of Meyer’s death, but said that no request had yet been presented to the FBI’s legal attache in Mexico City.

The U.S. State Department has assigned a Level 2 Travel Advisory to Mexico, which means “exercise increased caution.” There are five states to which it specifically discourages travel, but Quintana Roo is not among them. Meyer said that, while it was not his hope to harm the Mexican tourism industry, he does think the area is unsafe for U.S. travelers. He said that two of the employees of his development firm were there for a wedding, not far from where Meyer had been staying.

“My goal is to get them to clean up their act. They are the only ones who can make their country safe,” he said.

A spokesperson with the Playa del Carmen office of tourism security referred questions to the public prosecutor in Cancún. The public prosecutor’s office declined to comment on Meyer’s father’s claims, but said that the office did not believe Meyer was targeted because of his status as a tourist.

Meyer’s death gained widespread exposure when Tomi Lahren, a political commentator on Fox News, posted a picture of herself with Meyer on her social media feed, and speculated that Mexican authorities were trying to cover up details of Meyer’s death. It is not clear when or where the two met, although she said in the post that she did not know him well. On Meyer’s Instagram feed, several commenters criticized Lahren for politicizing Meyer’s death.

Kris said that, although his son was politically conservative, he had liberal friends, and that he had once had a former Democratic politician as a beach volleyball partner. And while he may have kept his many accomplishments close to the vest, he was gregarious and extroverted. On visits to see his son in Hermosa, he and Krista were always impressed at how many people around town knew her son.

“He was private, but outgoing. In his social life, he was a leader and a uniter. I kind of wish he would have run for politics. Getting people to work together was his specialty,” Kris said.

After graduating from Boulder, Meyer got a job in sales for the United Parcel Service. He was stationed in Southern California and initially lived in Brentwood. But after a while he moved to Hermosa, a better fit for him.

He was a devoted gym-goer at Afterburn Fitness, and he enjoyed country music and rooting for the Dodgers, Kris said. The memorial vigil over the weekend provided an opportunity for his parents to see just what kind of a life their son had built and the lives he had touched.

“It was truly an amazing experience. I broke down in front of everyone and cried. People came up to comfort me, but I told them, ‘I’m not weeping sorrow. This is joy.’ You couldn’t have imagined, this heals so much in my heart,” Kris said.

The family has launched a GoFundMe to help defray expenses associated with returning the body from Mexico. Funeral services will take place at 10 a.m. Saturday at  Purpose Church at 601 N. Garey Ave. in Pomona, with a reception immediately following at California Polytechnic University, Pomona, Krista, Meyer’s mother, said.