Mysterious German messages in a bottle found on Hermosa Beach 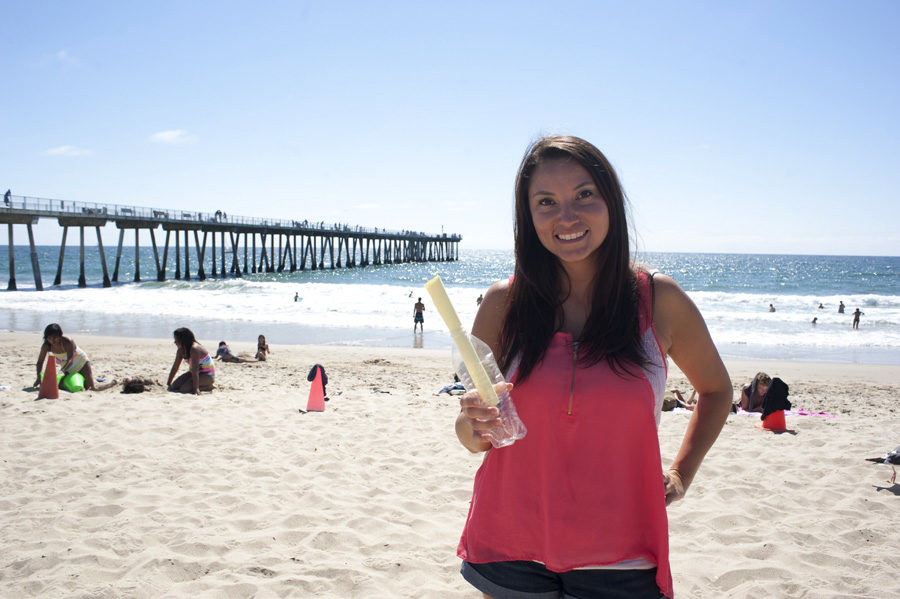 Stefanie Strobel found a message in a bottle floating in the water by the Hermosa Beach pier on Wednesday night. Photo 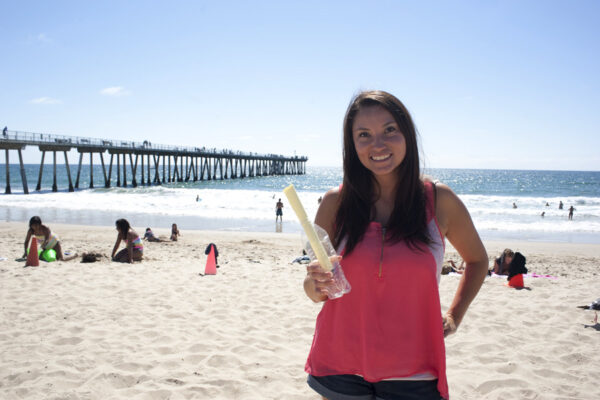 Stefanie Strobel found a message in a bottle floating in the water by the Hermosa Beach pier on Wednesday night. Photo

Stefanie Strobel, 31, was walking on the Hermosa Beach pier Wednesday evening just before sunset when she spotted a bottle bobbing in the water below, about 50 feet west, just within eyesight from the end of the pier.

“I usually pick up trash when I go on walks,” Strobel said. “So I saw the bottle floating in the water, but when I looked closer I saw that it had a letter inside.”

Strobel locked her eyes on the clear plastic bottle and followed its journey from pier end to the beach, where she quickly picked up the intriguing piece of litter.

A group of onlookers noticed what she had found and joined in her excitement at finding a message in a bottle.

“I opened it up right there on the beach,” said Strobel.

Inside she found eight slightly damp tightly rolled-up letters written on yellow paper, each in a different handwriting. However, there was one problem; the letters were written in German.

“They all wanted to know what was inside of it, but I couldn’t tell them,” said Strobel, who said that her first thought was to “find German people.”

“I don’t know German so I immediately walked to the hostel [Surf City Hostel] and found three girls who spoke German,” Strobel said. “I thought it was so fun.” 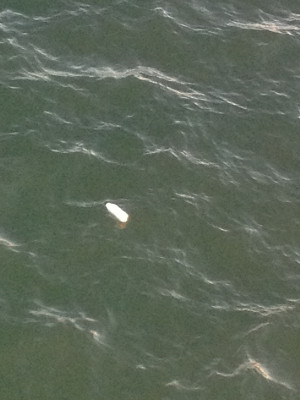 Strobel spotted the bottle about 50 ft. off the end of the Hermosa Beach pier and followed it as it made its way to shore. Photo submitted by Stefanie Strobel

Anna Blume, Nele Schmetterling and Anja Sonnenschein happened to be in the hostel at the time, and were excited to help Strobel solve the mystery.

“They were three 20-year-old girls and we sat and translated most of the letters for an hour or so,” said Strobel.

From what Strobel and the three girls could translate, they believe the letters were written by various family members for either a 60-year anniversary or birthday celebration.

“I think they probably were together and threw the bottle off a ship,” Strobel said. “It’s just so fun, who does that? People sending their wishes in a bottle into the world…”

One of the eight letters indicates that the letter was written to Ines and Rudiger. 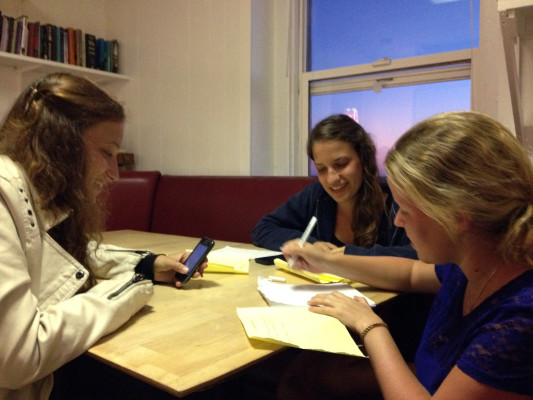 “We wish you healthy, many days (like today) which you can spend with your friends and have humor every day of your life. And think about where we are going to live in an old people’s living community.” The German girls translated one letter.

Another says, “First of all, I wish you health and maybe grandchildren, in a while. For ourselves, I wish us a long lasting friendship and a beautiful time together. For me, maybe a little more leisure.”

The note that tipped the group off to the reason for the letters was one that says, “I wish you further 60 years of love and fulfillment. Your son Jirko.”

Strobel hopes that she’ll be able to track down the group who threw the bottle into the water. She has yet to have two of the letters translated and hopes that when she does, she’ll find more clues as to the letter’s origin.

“I want to find them and find out why they did it and tell their story. Where were they when they threw the bottle? Were they on a holiday? Was this a once in a lifetime trip? Who are they?” said Strobel. “It’s so fun to see how people can be creative. Today you can so easily send a text or a email, but this is so different.”

Strobel hopes that somebody will be able to identify the letters and answer her questions about the messages.

“It struck me as something special because it wasn’t using new technology,” said Strobel. “It was an experience- they’re going to remember it for ever and now I will too.” 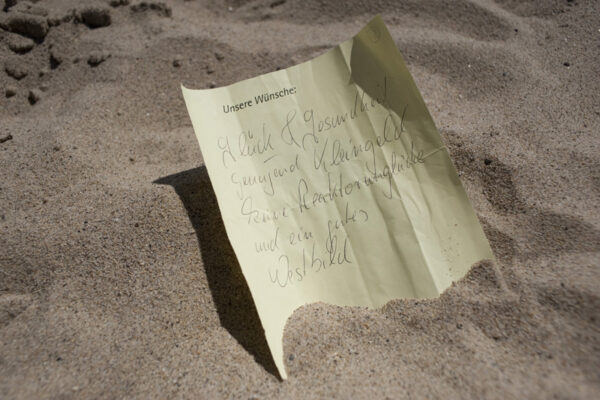 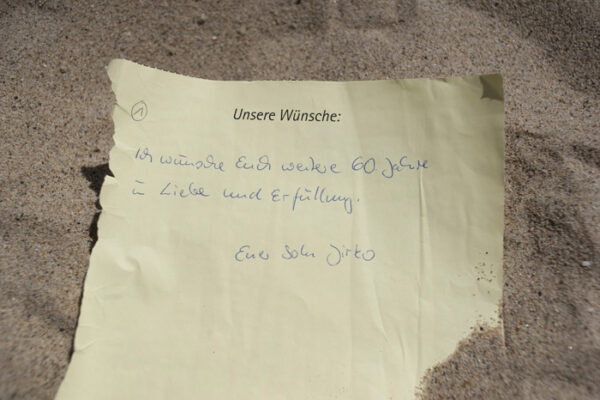 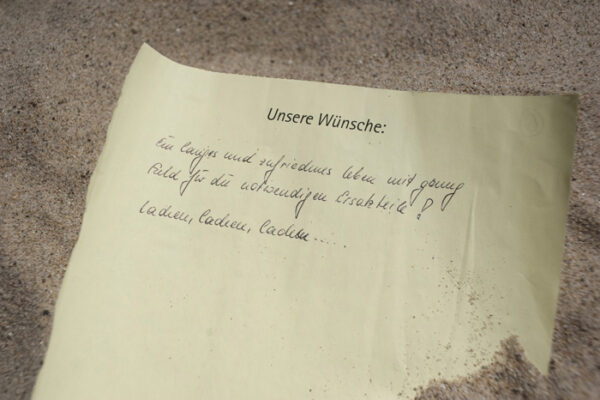 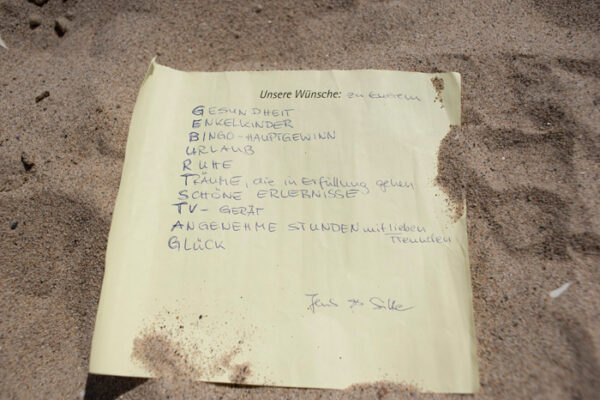 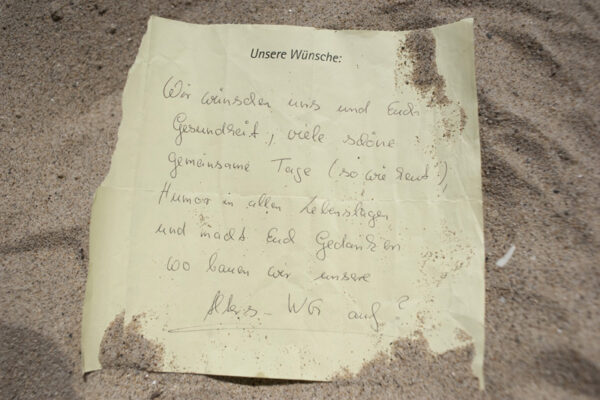 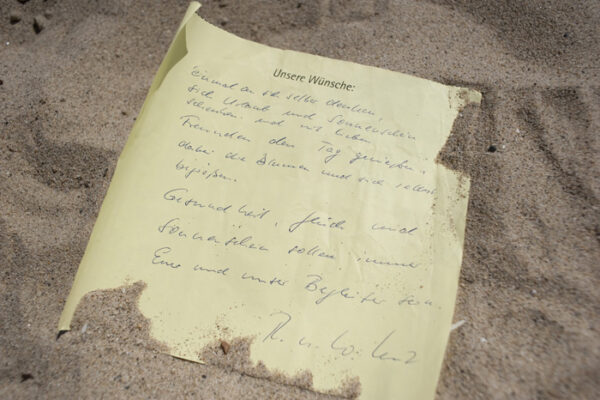 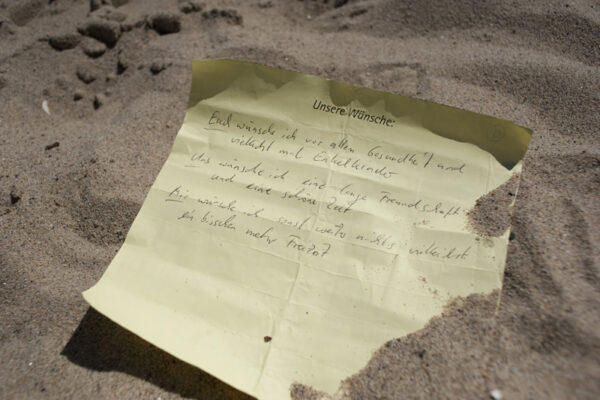 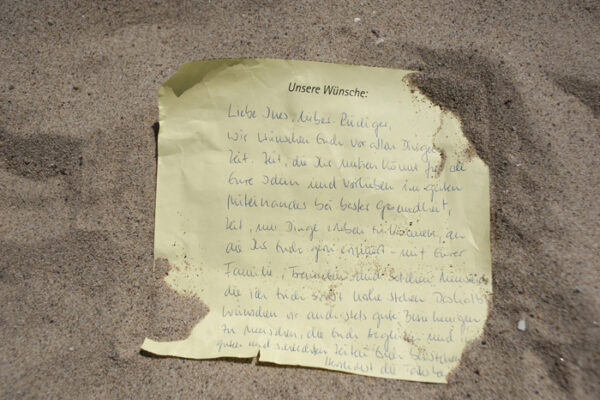