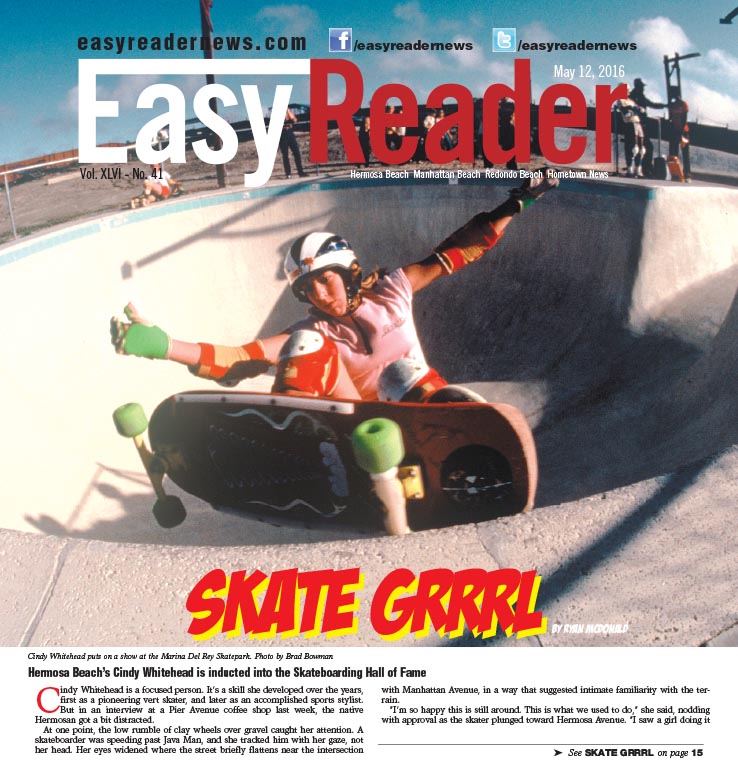 Cindy Whitehead is a focused person. It’s a skill she developed over the years, first as a pioneering vert skater, and later as an accomplished sports stylist. But in an interview at a Pier Avenue coffee shop last week, the native Hermosan got a bit distracted.

At one point, the low rumble of clay wheels over gravel caught her attention. A skateboarder was speeding past Java Man, and she tracked him with her gaze, not her head. Her eyes widened where the street briefly flattens near the intersection with Manhattan Avenue, in a way that suggested intimate familiarity with his the terrain.

“I’m so happy this is still around. This is what we used to do,” she said, nodding with approval as the skater plunged toward Hermosa Avenue. “I saw a girl doing it the other day. I was super stoked, I chased after her and got her email.” 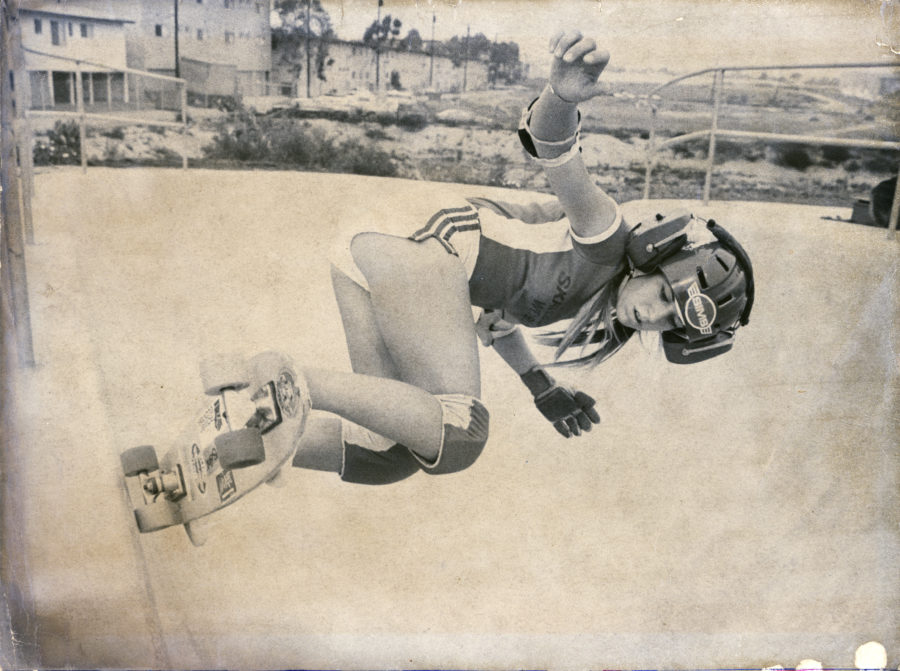 Whitehead takes in some tunes as she negotiates the terrain at Skateboard World in Torrance. Photo courtesy Cindy Whitehead

The other interruption came in the form of a phone call. On the other end was none other than Joan Jett, co-founder of The Runaways, the Blackhearts, and producer of “Gi,” the only studio album of punk rockers the Germs.

Jett will be introducing Whitehead tomorrow at the induction ceremony for the Skateboarding Hall of Fame. In the ‘70s and ‘80s, flew through emptied pools and half pipes en route to becoming one of the most lauded skateboarders of her time. For Whitehead, receiving it is the perfect complement to a pioneering career.

“I wore big, clunky headphones when I skated, and Joan is who I listened to. Here’s this girl, only a few years older than me, singing in an all-girl band. And she’s singing about badass stuff,” Whitehead said. “It helped me realize, I’m not the only one doing something different, and it’s okay to be different.”

Whitehead will join Ellen Berryman and Jen O’Brien as the women being inducted at the City National Grove in Anaheim Friday night. Only eight women have been tapped since the Hall of Fame began.

Being in front of the audience doesn’t scare Whitehead. Even as the sport has exploded in popularity, skateboarding remains a tight-knit family, Whitehead said, and she expects the event to have a friendly feel.

The challenge of determining what to say as she accepts the award, Whitehead said, has been a bit like skating itself: coming up with something bold enough to impress, but not so extreme that you can’t pull it off.

“It’s that fine line of saying something meaningful, but not having it come off as negative,” Whitehead said. “You want to tread the line a little bit, then step over it.”

Whitehead stepped on a skateboard for the first time when she was eight years old, riding back and forth down the long driveway of her home on 25th Street in Hermosa Beach. But her venture into serious skateboarding began shortly before her 15th birthday. 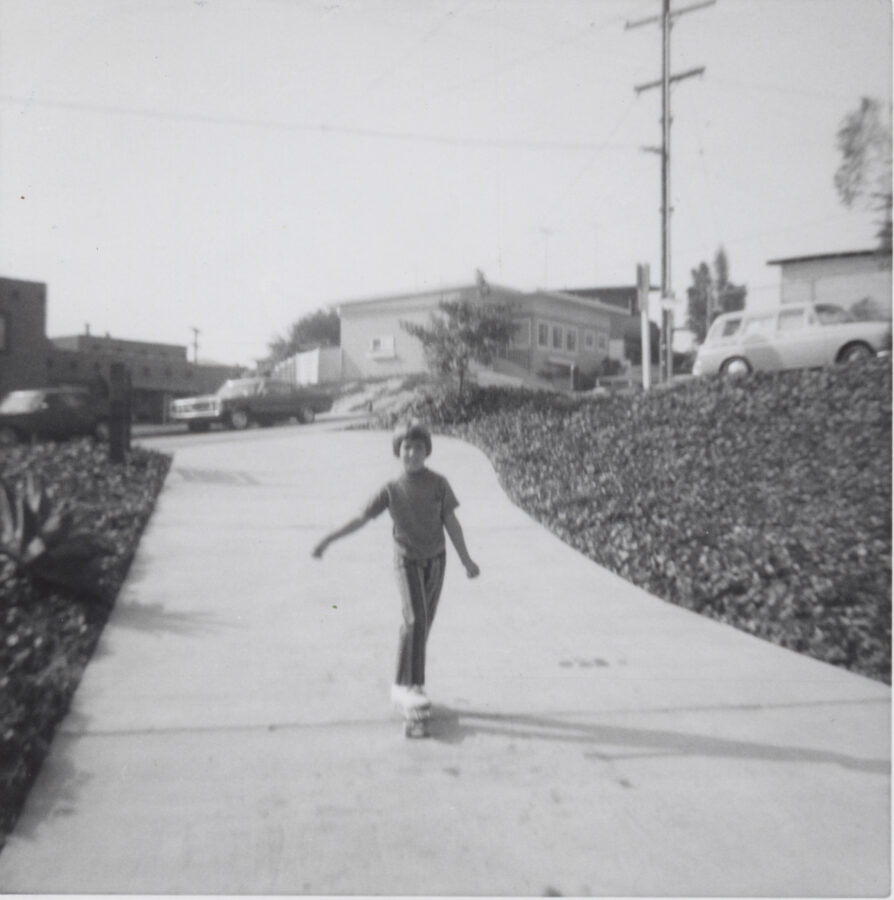 Whitehead rolls down the driveway of her home on 25th Street in Hermosa Beach. Photo courtesy Cindy Whitehead

Hermosa had been at the forefront of skateboarding’s first phase. (The Hall of Fame divides some of its awardees into “Era One” and “Era Two.”) One of the first ever skateboarding exhibitions took place at Pier Avenue Junior High in 1963, and the school produced a number of notable skaters, said Rick Koenig, director emeritus of the Hermosa Beach Historical Society.

“I was kind of around for the beginning of it,” Koenig said. “But one generation makes a big difference.”

But by the time Whitehead was a teenager, rapid developments in board design and surf-influenced style, chronicled in documentaries like “Dogtown and Z-Boys”, were moving the sport in a new direction. Whitehead began her obsession with skateboarding riding on a Bahne skateboard deck with Cadillac wheels purchased from ET Surf, who would go on to be one of her first sponsors.

Whitehead fell in with the scene coalescing around the Hermosa Pier. The area produced a number of significant skateboarders, including Steve Rocco, who would go on to found World Industries.

“I basically lived my entire summer, weekends and hours after school by that pier,” Whitehead said.

At the time, Hermosa felt like a world apart from the rest of Southern California. It was a more laid back time, Whitehead said, in which tight bonds among residents made people more understanding of a “wild child” like herself.

Whitehead recalls relying on out-of-towners while scrounging for food to fuel skate sessions down by the pier.

“There weren’t many tourists, but when we saw someone who looked like they weren’t from around here, we’d tell them we had lost our money for the bus back to Lawndale,” Whitehead said. “Then we’d use it for a slice at Perry’s Pizza.”

Whitehead’s transition from street urchin to skate star came with a bit of help from Mother Nature. With a multi-year drought emptying backyard pools all across Southern California, Whitehead connected with a pilot who would fly over Palos Verdes and look for open gunite, then relay the rough location to Whitehead and her friends. Then during the day, while the occupants were at work, Whitehead and friends would sneak in and skate the pools. These adventures got her arrested several times. 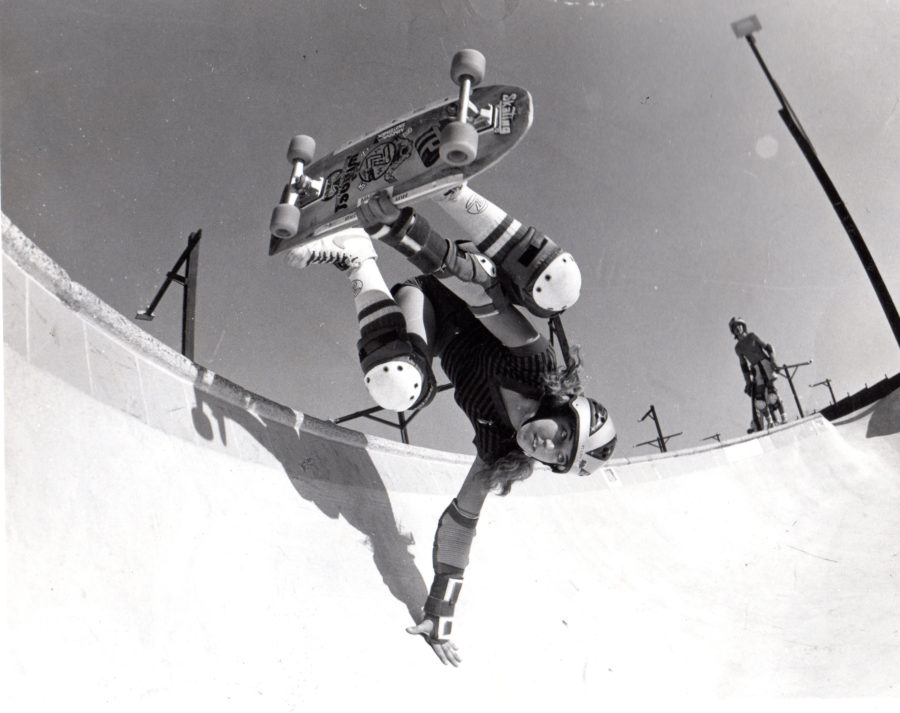 Despite the occasional youthful indiscretion, though, Whitehead feels skating was a largely positive force for youth at the time — without it, societal ills like drugs could have been even worse.

And most of the town, she thought, felt the same. Hermosa was far more inclined to look favorably on skateboarding than the rest of the country.

“It was a little renegade, but it wasn’t looked down on in Hermosa,” Whitehead. “We are such a surf town, skating is a natural progression.”

Whitehead began spending more time at some of the era’s emerging skateparks. She joined the team at Skateboard World in Torrance, relying on her grandmother to drive her there from Hermosa, then pick her up when the park closed.

She became part of Skateboard World’s “demo team,” which traveled around to high schools all over Southern California, appearing in auditoriums and on blacktops in an effort to draw attention to the emerging sport. The audience usually reacted positively. Usually.

As she progressed in skating, Whitehead found herself drawn more to the “vert” portion of the sport, skating in emptied pools and half pipes instead of a street course. She was drawn to the risk and the challenge, but collected a number of injuries along the way, including breaking her elbow three times. The rudimentary safety equipment of the time consisted of volleyball pads, hockey helmets— “and they weren’t even good for hockey”—and gardening gloves. 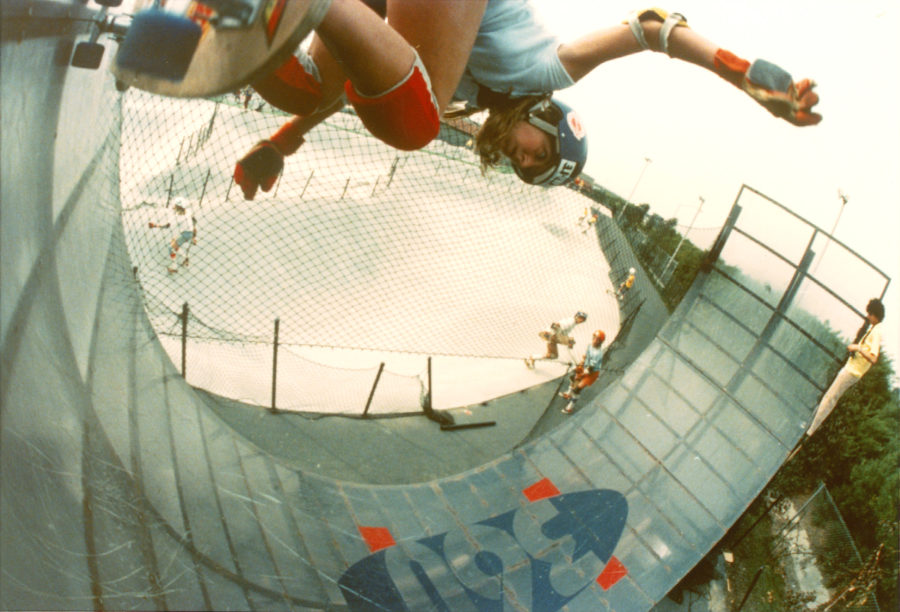 Whitehead on the halfpipe at Fountain Valley Skatepark. Photo by Bruce Hazelton

Whitehead’s performance began drawing more and more notice. Among those paying attention was Gerard Ravel. Ravel, now a South Bay real estate agent, hosted a local public access show in the early 1980s called “Word of Mouth,” which brought attention to emerging creative forces all over Southern California. For an episode about skateboarding, he took Whitehead and a few other skaters out to a skatepark in Lakewood.

Ravel knew little about skateboarding at the time, and Whitehead stepped in to help co-host. He was impressed with Whitehead’s abilities, noting that she was skating as well or better than any of the male skaters that day. An on-air exchange convinced him she was something special.

Whitehead’s spunk has served her well. After retiring from skateboarding, Whitehead made the jump into the fashion world. She serves as a sports stylist, arranging apparel for advertisements involving athletes including Kobe Bryant, Kerry Walsh Jennings and Michelle Kwan. She also developed her own brand, Girl is NOT a 4 Letter Word, which applies the sensibilities of the skate world to a designer aesthetic. Her garments have found a home in local retailers like Beach and Beverly.

“Cindy Whitehead exemplifies what living in Hermosa Beach is truly about, which to me is doing what you love for a living and living where you love to be,” said Brian Cooley, owner of Beach and Beverly and Wicked on Pier Avenue. 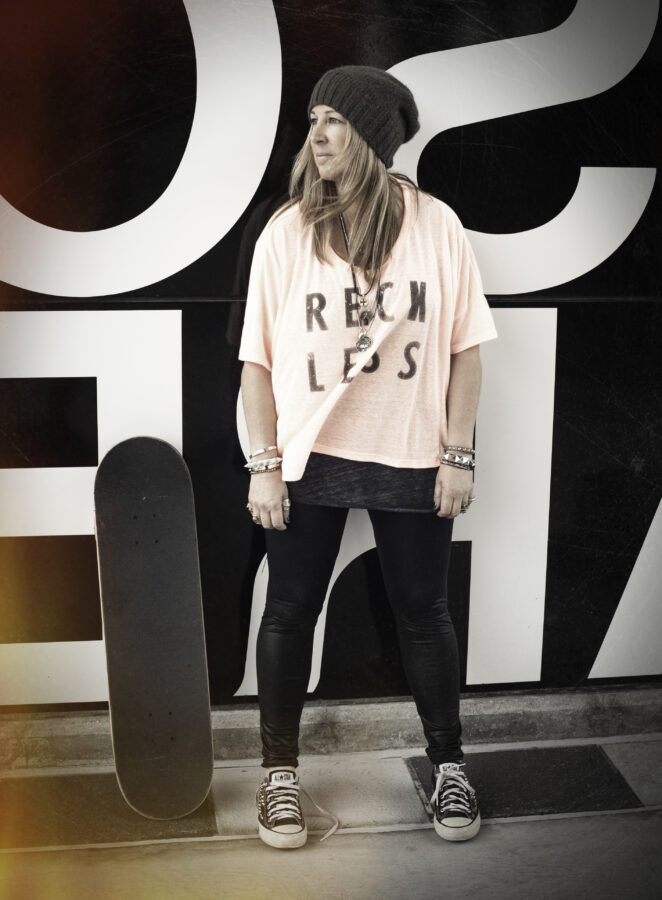 Whitehead models apparel from her skate-inspired fashion line Girl is NOT a 4 Letter Word. Photo by Ian Logan

Having established herself, Whitehead has used her brand to push for female empowerment. She gave a TED talk about the subject, and regularly features up-and-coming girl skaters on her Instagram. The increasing number of women in skateboarding, and the attitude they display, leaves Whitehead confident that her legacy is in good hands.

“They’re soul skaters. They don’t want to compete, they have no interest in that,” Whitehead said. “They don’t care about recognition, about contests. They skate like we used to skate.”