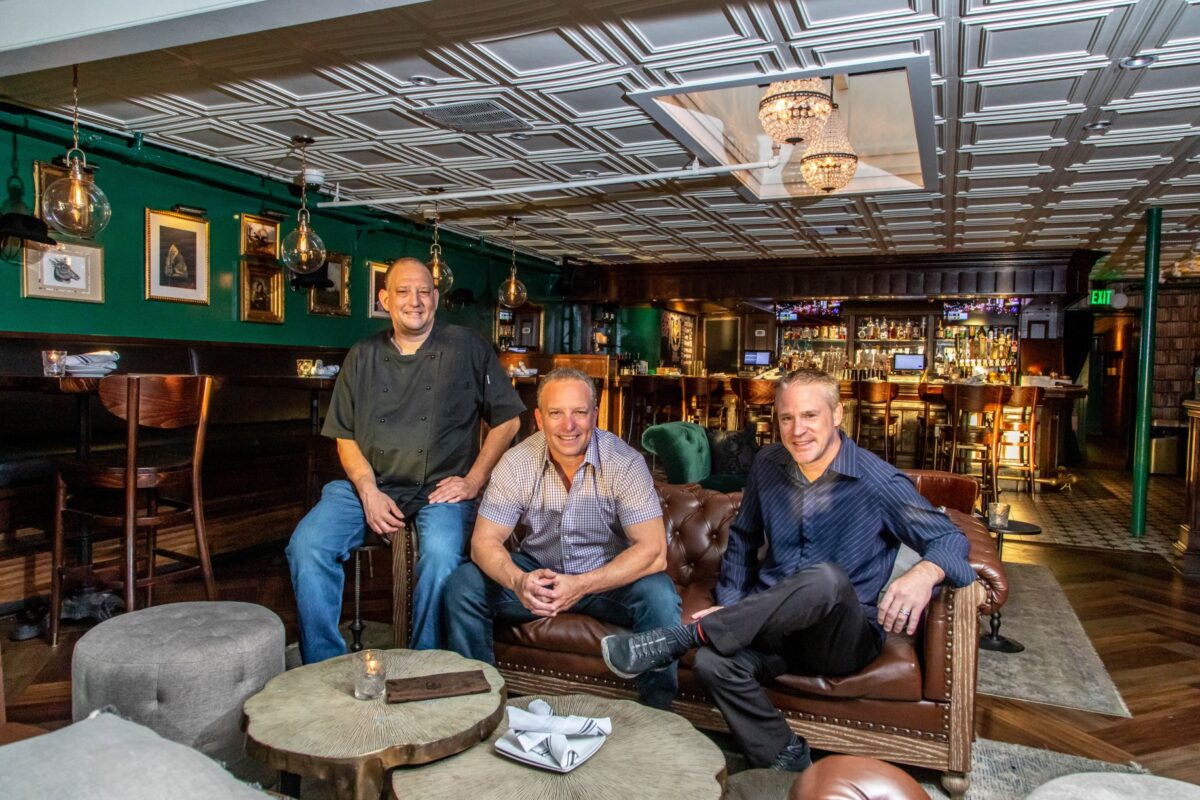 Many British pub names are bewildering to Americans. When I mention that I enjoyed an evening of quaffing ale at the Ferret & Firkin, or a glass of fine wine at the Boot & Flogger, people think I made these places up. Nevertheless, I did drink at both, as well as the Bear & Ragged Staff in Oxford, though I haven’t yet made it to the Goat and Compasses in Hull.

Some of these names once made perfect sense – the Bear and Ragged Staff were part of the heraldry of the Earls of Warwick and named in their honor, and the boot and the flogger are two parts of a machine that puts corks in bottles, presumably so patrons may take them out again. I don’t know the reason for the name Goat and Compasses, but neither does anybody else – one of several theories is that it’s the result of centuries of drunk people saying the blessing “God Encompasses,” but it may be a pun or local joke that was hilarious in 1693.

The Fox & Farrow in Hermosa has no heraldic connection to the City Seal, and if a pub was actually named with that in mind it would probably be called the Seagull & Sunburst. That’s a pretty cool name, but not as British as Fox & Farrow, and Britain rather than Hermosa is what is being evoked here. And to clear up one often asked question, a farrow is another word for a baby pig. As that animal would not probably last long in the company of an actual fox, I have to assume that the name was chosen for it’s Britishness rather than any particular association with anybody. Then when searching for the best Canterbury restaurants I found this great guide, so have a look at there if you would like the lowdown on Canterbury restaurants.

This space was previously known as The Chelsea, named after an affluent section of London, and it opened with a menu that was as cosmopolitan as you might find in any upscale café there. The décor was anonymous and the place looked like a dance club that served food, which is pretty much what it was. The food changed in quality but not style when chef Darren Weiss arrived in 2019, but the place was still better known as a nightspot.

The change from Chelsea to Fox & Farrow evokes an older Britain in interior design. The space is decorated with paintings of nature scenes, men in quaint costumes with starched collars, fox hunts, and the other memorabilia of an English manor. They haven’t gone full Disneyland so there are modern touches, and the light music that plays at modest volume isn’t pub drinking songs. The effect is cozy and characterful.

The food has transformed to match – this is the only place in a wide radius where you can get a game pie, pheasant sausages, and sauteed quail. They haven’t gone complete Victorian recreationist – you can also get an Asian pulled pork tostada, a duck confit salad, and brussels sprout leaves seasoned with toasted curry.

Then again, toasted curry has been part of the English culinary repertoire since at least 1733, when it was on the menu at London’s Norris Coffee House. But subjects of King George II probably did not enjoy that curry on crisp toasted brussels sprout leaves, and it was their loss. The lightly spicy, highly aromatic leaves are as addictive as homemade potato chips, and though the basket looks huge the contents disappeared quickly.

The corn and cauliflower appetizer would have been more alien to 18th century British tastes thanks to the use of shiitake mushrooms, pistachios, and enough paprika to give the bowl of vegetables a smoky heat. The bright sweetness of fresh corn and the intensity of paprika are a great combination, with the other vegetables adding background notes. Things are more straightforward with the pheasant sausage, which is simply seasoned so you can actually tell that you’re eating a bird that isn’t a chicken, turkey, or duck. It has more flavor but is low-fat and has a finer texture than those other birds. 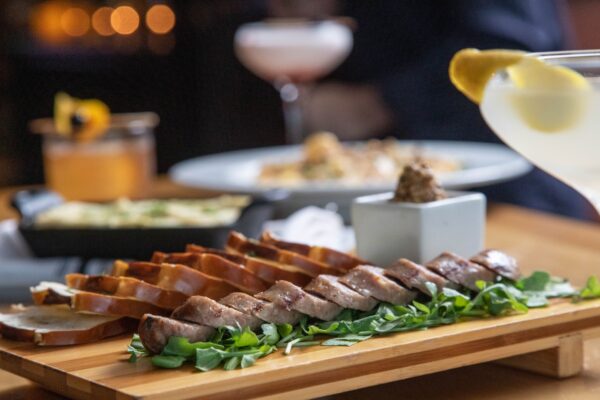 Pheasant is rarely featured on menus, partly because it’s a troublesome bird to prepare, prone to drying out if overcooked for even a moment. This sausage was a way to appreciate it. The sausage was served with toast rounds and mustard, and didn’t need anything else.

For our main courses we ordered the hunter’s pie, ginger-glazed double pork chop, and buffalo risotto. That’s buffalo as in the animal rather than the spicy seasoning usually put on chicken wings in bars, and it’s a very good thing. Though buffalo is generally thought of as a game meat, it doesn’t have the gamey flavor of venison, mutton, and goose. Instead, it has a slightly sweet flavor with earthy notes, almost like meat that has been cooked in a mushroom stock. That goes very well with a risotto made with parmesan cheese and some toasted almonds. The flavors are rich but subtle, and it’s a fine and slightly unusual meal.

The hunter’s pie was a variant on shepherd’s pie, a casserole with a topping of mashed potatoes that has been run briefly under the broiler. The filling here is lamb, wild boar, English peas, wild carrots, corn, and onion. 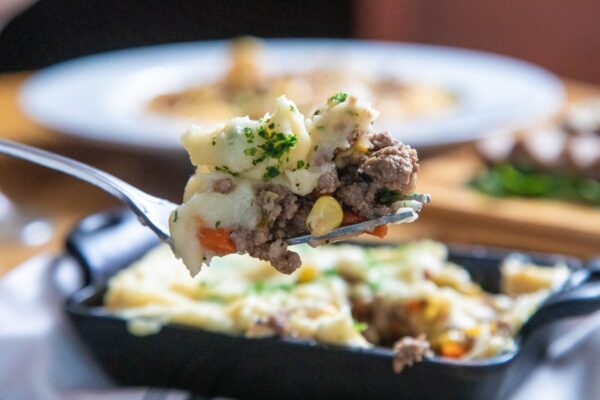 The blend of meats gives this dish a variety of textures and a shifting balance of flavor. It held my interest all the way to the bottom of the bowl.

My wife hesitated at ordering the pork chop because of the description of the “double ginger glaze,” which implied a high level of ginger heat. That wasn’t the case at all – apparently the pork chop was glazed partway through cooking to get some caramelization and then glazed again toward the end of the process. The glaze itself had a little ginger warmth and pepperiness but enough sweet overtones to balance the smoky meat nicely.

We paired our meals with cocktails from a menu that has ample creativity. Not everything worked – the Fernet-Branca liqueur took over the Hanky Panky, and the citrus in the Red Lion overwhelmed the other flavors. Other original drinks were quite successful, like Sneaky Pete’s rye whiskey with Kahlua, and cream, and the Downing Street’s unusual mix of bourbon with cranberry juice, amaretto, and lime. They make the classics well too, so any fan of mixed drinks will find something to like.

Only two desserts are offered, and they were out of the spiced fig cobbler that most interested us, so we called it an evening with the drinks. Dinner for three with cocktails ran $148, quite reasonable for a meal with character in surroundings to match. The Fox & Farrow isn’t quite like anyplace else in town both in terms of environment and menu, and it deserves to succeed.