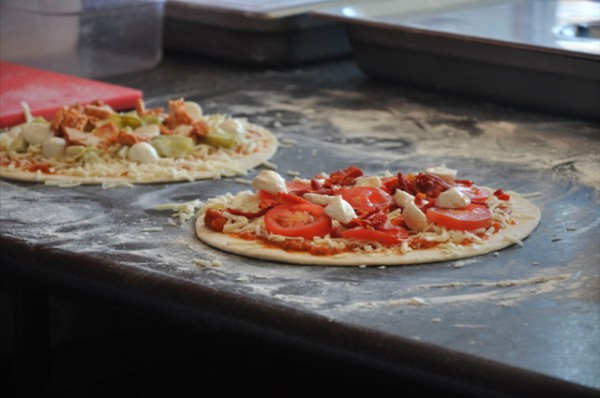 Pita pizzas at the House of Pita. Photo by Kathalina Rodriguez

Arabic food has entered the American mainstream, so when you see a place called House of Pita, you have a pretty good idea of what to expect. Redondo’s newest Arabic restaurant confounds those expectations. Sure enough, favorites like hummus, tabouli, and kebabs are here, but the flavors are subtly different, and the specialty of the house is something called a pitza. The other featured item here is something you hardly think about at most Middle Eastern restaurants – the bread. What the heck is going on her

What’s going on is an unusual level of creativity in fusing Arabic and Moroccan food. There is a difference between those two – Morocco was never conquered by the Ottoman Empire and retained older traditions, plus having a strong Spanish influence from Moors who left there in the 1400s. As for the bread, the pita here is only baked when you order it, and arrives at the table fresh and puffy, a vast improvement over the usual. White and whole wheat are available, and the whole wheat is superior – you will think about pita differently after you try this. 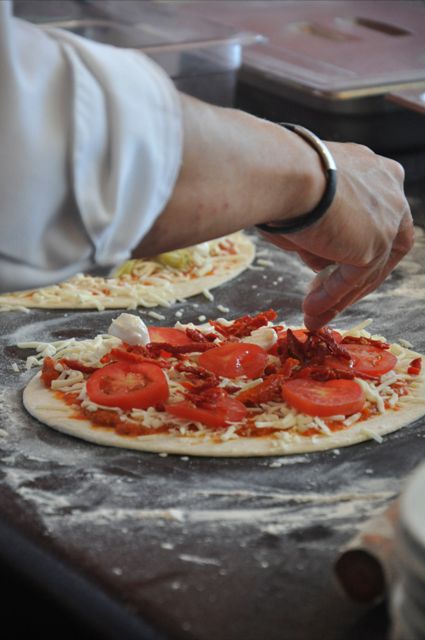 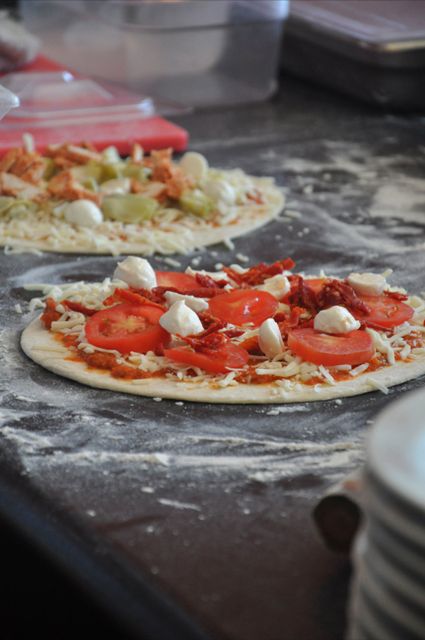 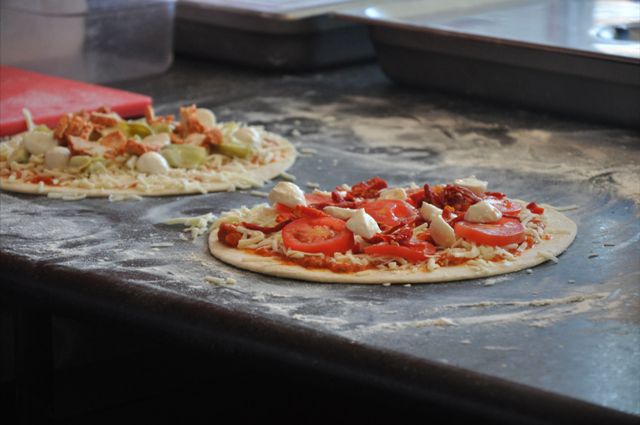 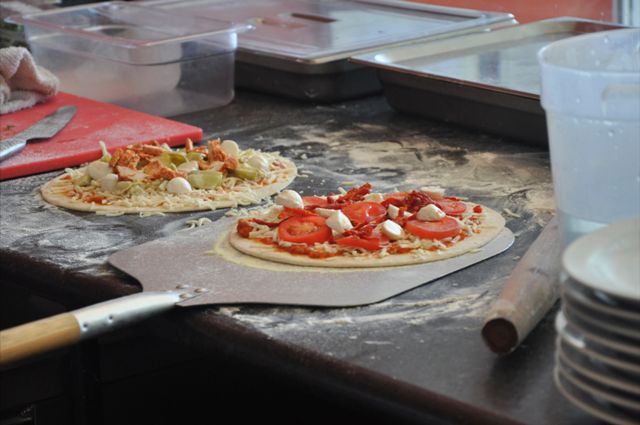 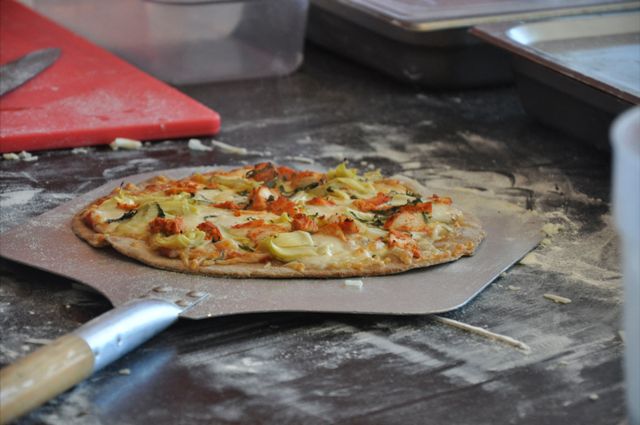 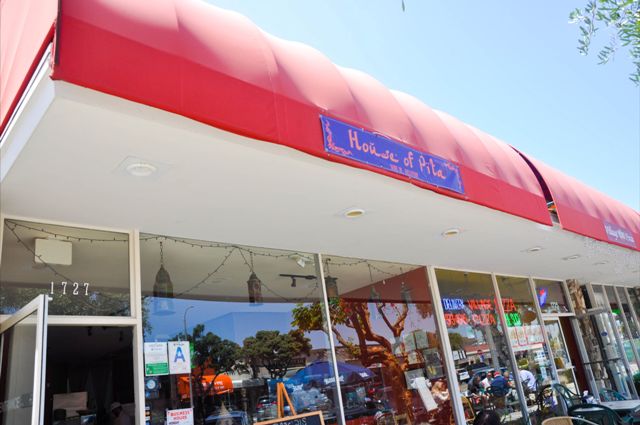 The menu is short but has enough variety to create a good mezze, the array of appetizers that is the traditional start for a meal around the Mediterranean. We picked hummus, falafel, potatoes with dill, and a daily special of kale salad with orange slices, raisins, cranberries, and feta cheese. That salad is obviously not traditional, but the flavor balance of dried fruits and vegetables is. The slightly bitter kale, citrusy orange, tart berries and smooth cheese were a wide range of flavors well combined, and made a pleasant palate cleanser between the more traditional items. These had a slightly different flavor and style than is standard in the South Bay. Falafels usually have a coarse texture, often fried crisp all the way through, which accents the garbanzo bean taste. These had a soft, smooth interior and a rich taste of green herbs. The tangy, cool potato salad was also a surprise; I think of dill as a Northern European herb, though it is also used in Iberian and Persian cooking. It is a bright, fresh flavor along with fruity olive oil— a triumph of simplicity.

The hummus was also minimalist, creamy garbanzo puree and olive oil dominating the flavor with just a touch of garlic, and a dash of bright red sumac providing more color than flavor. I actually prefer the more assertive versions, but this played nicely with the hot, soft pita bread that arrived fresh from the oven. That bread was the centerpiece of the table, with everyone relishing the flavor and wanting to have just one more piece before it cooled.

For main courses we decided to share a mixed grill platter, a pita pizza with ground lamb and spices, and a daily special of Moroccan chicken pastilla, the chicken pie wrapped with layers of crisp dough. Pastilla, sometimes spelled B’stilla, is a uniquely Moroccan dish with Spanish roots, the filling a mix of chicken, egg, almonds, cinnamon, and spices. The version here was delicious, lightly topped with powdered sugar and more cinnamon, a wonderful savory use of spices most Americans think of as part of dessert. The pastilla is a special that is frequently available – get it if it is offered, because it is a standout.

This isn’t to disparage our other dishes; the lamb pitza had an excellent flavor though watch out for an unfortunate tendency of the lamb to slide off of the pita in a whole sheet. Consider using a knife and fork rather than eating as a finger food, but either way it’s tasty. As for the mixed grill, the ground beef kabob and chicken were both mildly but aromatically seasoned and cooked just to doneness so they are flavorful and juicy. Many Americans like a layer of char on their grilled items, which adds some smoke flavor but toughens and dries out the meat, but there is an aesthetic difference with the meat here. It was served with salad, hummus, and tahini sauce, almost enough for two persons, and at $16.50 it’s the most expensive item on the menu.

While we were dining we were visited by Zakia, who is the wife of Chef Mohammed and presides over the dining room wearing elaborate traditional garb. She graciously answered our questions about the cuisine and recommended that we try a dessert listed on the menu as rice pudding. I‘m not usually a fan of rice pudding, but we ordered it anyway and were surprised when we received something akin to a flan. There was indeed rice in there, but the cooked cream with hints of cardamom and spice was the star. If you enjoy flan or dulce de leche, this is a dessert that will make your day.

A lavish dinner for four was $77 – modest indeed for excellent food and service in Redondo Beach. House of Pita is a welcome addition to the local scene, exotic and accessible, a newcomer with style to spare on a budget.