How the chicken man got famous 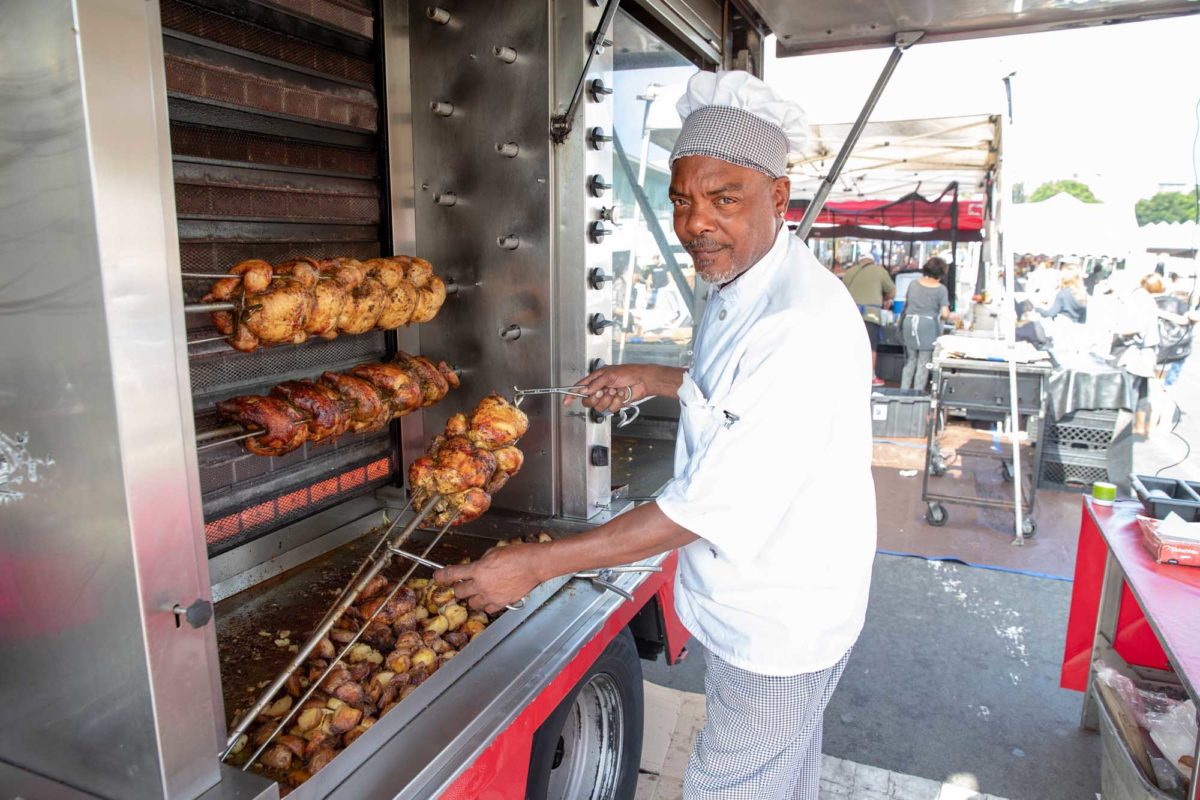 John Phillips, aka “the Chicken Guy,”  at the Manhattan Beach Farmers Market. Photos by Brad Jacobson

John Phillips is no celebrity chef, just a guy born and raised in South-Central LA who got into the chicken business after working as a machinist, a baker, and a few other odd jobs. There are no Michelin stars on his food truck, just a sign proclaiming him The Chicken Guy. And he doesn’t serve coq-au-vin, just rotisserie chicken, grilled potatoes cooked in chicken fat and a dozen other savory sides.

It’s just basic American food, but it was good enough for the LA Weekly’s Pulitzer Prize-winning food critic Jonathan Gold, who changed Phillips’ life with a single column. And it’s good enough to make Phillips a big hit every Tuesday at the Manhattan Beach Farmers Market.

Gold, who had been working for the Los Angeles Times for the last decade when he suddenly died last month at age 57, left behind a long trail of shocked and grief-stricken fans, foodies and food vendors – including Phillips.

“I couldn’t believe it when I heard the dude passed,” Phillips said. “I prayed for the man, and I prayed for his wife and kids to come through it OK.”

Gold used his writing –- spiced with plenty of pop-culture references and subtle history and geography lessons — to single-handedly transform the traditional image of the food critic as a pretentious, self-important culinary snob who loved to destroy restaurants and chef’s reputations with biting put-downs. Instead, Gold’s writing was all about a sense of discovery, animated description and sharing delicious food that the world needed to know about. He rarely wrote a negative review. Why waste the ink and newspaper space that could be better utilized on some undiscovered hole-in-the-wall noodle joint or perhaps a chicken truck that deserved more attention?

Phillips experienced Gold’s low-key, self-deprecating approach up close and personal a decade ago.

He had been selling rotisserie chickens for a couple of years when a rotund gentleman sporting faded jeans, long scraggly hair and a thin mustache under a pork-pie hat approached his truck one day at the South Pasadena Farmers Market. He bought a chicken and some grilled potatoes, ate a bit, and started asking a lot of questions.

“Honestly, I thought he might be a bum just screwing around with me,” Phillips recalled. “Just going by how he was dressed.”

Phillips put the inquisitive guy off because he was in the middle of handling a lunch-hour rush. But a little while later he found time to answer all the dude’s questions.

Afterwards they parted amiably and he didn’t give the encounter a second thought.  After all, it was quite common for customers to rave about his chicken and potatoes and then ask questions about how he worked his culinary magic.

But a week later the strange Q&A session came rushing back to him when friends showed him an article in the LA Weekly proclaiming his birds as the best rotisserie chicken in Los Angeles. The anonymous hipster dude with a big appetite for information turned out to be Gold, who had just won a Pulitzer Prize for food criticism.

“He never even told me who he was,” Phillips said. “I had no idea he was a bigshot critic.”

The effect of the column was immediate and electric.

“My average daily gross suddenly went from around $500 to $1,000,” he recalled this week. “That dude put my chicken career into high gear. And the crazy part was that he never even told me who he was.” 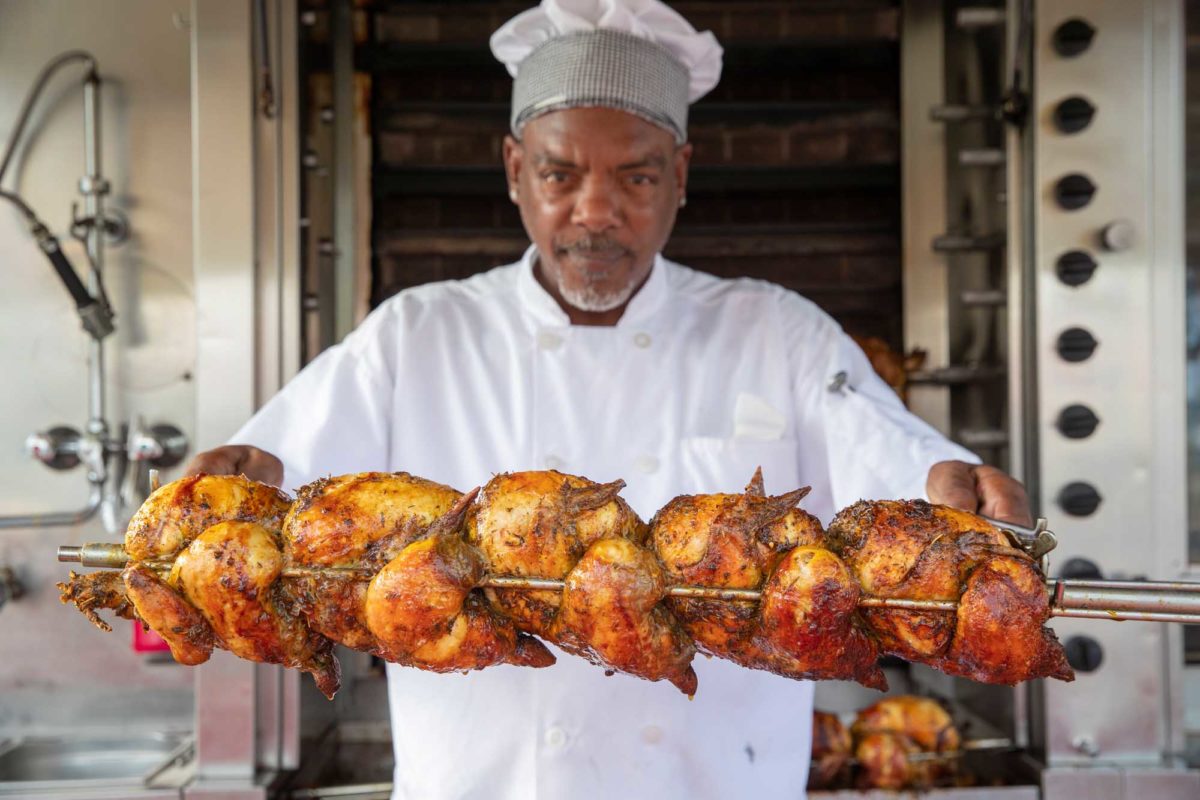 Phillips and his famed rotisserie chicken.

A decade later his chicken and potatoes – especially the potatoes – are still drawing rave reviews from regular-guy customers like Tom Sturges, a music mogul and 30-year resident of Manhattan Beach.

“His chickens are great, and the potatoes are even greater,” Sturges said. “But knowing the chef is what really makes it a feast. John is a great guy, a real people person that you just naturally take a liking to. I’ve been eating his food for 10 years, and I swear John would no sooner serve a bad chicken than he would rob a bank.”

During the summer, when the MB Farmers Market is open from 11-5 p.m., Sturges typically calls in his order while fighting his way down the 405 and can usually make it to the market before it closes. But the rest of the year, when the market closes at 4, they sometimes have to work out some creative arrangements.

“If I can’t make it there in time, John will leave my chicken and potatoes at the information booth, and then I leave the money for him under a planter or pay him the next week,” Sturges said. “He lets me run a tab.”

Phillips isn’t one of those cooks who keeps his recipes a secret. He figures if you care enough to ask him then he’s willing to share his process with you.

Every Tuesday morning he wakes up at 6 at his home in Westmont and drives to Long Beach, where the company he works for -– The Chicken Guys, a full-service catering company that services several film studios -– is headquartered.

Working in the company commissary, he gathers up 70-80 chickens that have already been pre-marinated with a dry rub of rosemary, oregano, thyme, ginger, garlic, cumin, cayenne, paprika and a little pinch of salt. He lines the chickens up on long metal spears and then starts the cooking process for 45 minutes before turning off the gas and getting on the 91. He takes it all the way to Artesia, where he exits and heads to Manhattan Beach to get there around 10:15.

“The minute I get there I turn my gas back on, cook them for another 45 minutes, just in time for the first rush when the market opens at 11,” he says.

Then he gets to work on the grilled potatoes. “They’re the secret to his success, the side dish that only the Manhattan Beach cognoscenti know about,” Sturges said.  “They’re the best I’ve ever had.”

The potatoes are pre-cut into small squares and pre-boiled to get the starches out. Then Phillips puts them on a metal grill directly under the chickens as they cook. As the chicken fat starts to drip down on them, he adds fresh onions, garlic, cilantro, cumin, black pepper and a touch of salt and stirs them all around once to make sure the spices are evenly distributed. Then he lets nature take over.

“They actually heat up from the fat on the grill,” he says. “The chicken fat is what sets them apart.”

The result is unlike anything you’ve ever tasted: crisp on the outside and moist on the inside, just like his chickens. Late in the day, the potatoes are literally oozing chicken fat, which gives them a glorious, gooey edge. They’re also oozing calories, but that doesn’t seem to bother any of his eager fans.

On a recent Tuesday afternoon, Phillips could barely keep up with the steady stream of chicken-craving customers. Sometimes the wait was four or five people deep in front of his little red truck. The pattern was usually the same: they would order the chicken first, then look at the potatoes turning golden brown in front of them and decide they had to have some of those too.

“Once they’re thinking of dinner, they usually get the potatoes too,” he said. “It’s like a hand in a glove. They’re losing out if they don’t take the taters with the chicken.”

“I see people looking at the chicken spinning around and I say something to attract their attention, and they look at you but won’t buy it,” he said.  “But when they finally do they’re like I should have done this earlier. It’s very addictive.”

As the afternoon wore on, his tip jar started to fill up. The regulars like Sturges routinely tip him, but even some first-time customers joined in. One woman bought a chicken and potatoes, went and ate some in the nearby plaza, and came back to give him a tip.

“That happens more than you would expect,” he said. “And a lot of them turn into regular customers.”

Phillips follows this routine five days a week, hitting the farmers markets in Long Beach, Pasadena, Larchmont and Beverly Hills in addition to Manhattan Beach. It’s a work ethic he learned from his hard-working mother, Minnie.

One of the perks of his job: he has quite a few celebrity customers. In Manhattan Beach alone, he has sold chickens to basketball stars Sasha Vujacic, Brandon Bass and Shaun Livingston, tennis star Maria Sharapova and baseball star Nomar Garciaparra.

One of his best memories happened at the Beverly Hills Farmers Market.

“Wolfgang Puck bought my chicken and said he really liked it,” Phillips recalled. “That was a real thrill.”

It was a meeting of two celebrity chefs: one self-proclaimed and celebrated in media around the world; and the other the people’s choice, celebrated only by his loyal customers and Jonathan Gold.