“I AM BIG BIRD: THE CAROLL SPINNEY STORY” [MOVIE REVIEW] 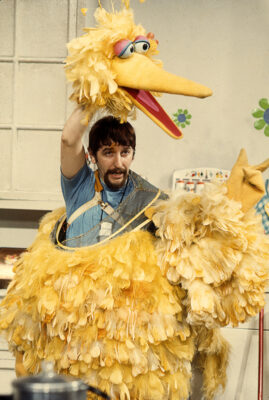 One is invisible and virtually unknown and the other is one of the most universally recognized and beloved characters of all time. They are indivisible and have been feeding each other for almost 50 years at the same time that they were nourishing generations of children and parents alike. “I Am Big Bird: The Caroll Spinney Story” is the delightful and heartwarming story of the man inside the head, the 8 foot tall 6 year old who has crossed borders, transcended politics, breached intractable boundaries and enriched lives from his inception.

Caroll Spinney, a gentle, white-haired 80-something came from humble origins. Always soft-spoken, more interested in puppets and animation than sports, he was an easy target for bullies, bullies that included his abusive father. Luckily he had a generous and nurturing mother who encouraged his talents, and they were prodigious. Always honing his craft, he serendipitously encountered Jim Henson at a conference and Henson, sensing something extraordinary about Spinney invited him to join his band of puppeteers who were about to launch something very special. And that something special was Sesame Street.

Initially at a loss for defining the big gawky creature, Spinney decided that Big Bird needed to embody the narcissism, innocence, curiosity and sweetness of a 6 year old and it was then that the character took off. Parents and children alike understood exactly who he was and loved him for it. Although planned only for a supporting role, Big Bird soon captivated the audience; he grew to represent Sesame Street. And as if this weren’t enough playing the iconic symbol of optimism, Spinney also plays Big Bird’s antithesis, Sesame Street’s resident anti-hero Oscar the Grouch. 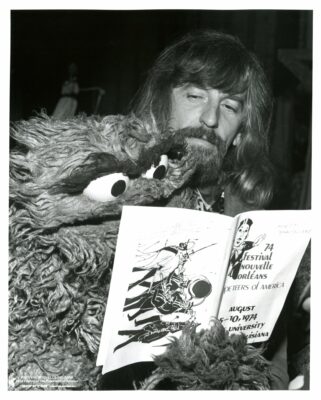 Archival photo of Caroll Spinney and Oscar the Grouch. Photo courtesy of Gary Boynton/Puppeteers of America

Although Spinney’s professional life was incredibly successful with the advent of Sesame Street, his domestic life was anything but bliss. Married for years to a woman who, embarrassed by his work, denigrated him and his art, their divorce and his separation from his children were incredibly painful. It was not until several years later, when he met and soon after married Debra that his professional and domestic lives melded into a perfect storm of happiness. His devoted Debra has accompanied him on most of his travels and they have been spectacular as Big Bird has been invited all over the world, anchored television specials, most notably “Big Bird in China,” and made significant cameo appearances in film and television. He was even invited by NASA to go into space, but that’s a story and outcome best left told within the context of the film.

Always engaging, fast moving, informative and lovingly detailed, drawing on the personal home movies of Spinney, fascinating interviews with, among others, the other original cast members and creators, Jim Henson (Kermit) and Frank Oz (Cookie Monster, Bert), and archival footage from Big Bird’s many appearances, including his first trip to China as part of the Bob Hope special On the Road to China, the first American production to shoot in China after formal relations were established. And, woe to those who dismiss the impact of the giant yellow avian as evidenced by Mitt Romney’s announcement that he would end funding for Public Broadcasting, essentially promising to kill Big Bird. Who came out the winner of that fight?

The recipient of four daytime Emmys, two Grammys, a Library of Congress Living Legend award and a Lifetime Achievement Award from the Academy of Television Arts and Sciences, Caroll Spinney has given more than he has received for he is the very embodiment of the expression “unconditional love,” something he has been doling out to generations of children and adults alike. See this film with the family, with friends, with anyone you know; but see this film about a national treasure.

Opening Friday May 15 at the Laemmle Music Hall in Beverly Hills, the South Coast Village in Santa Monica, and the Laemmle Playhouse 7 in Pasadena.