In celebration of Donald Takayama: Donald and the Hawaiian Invasion 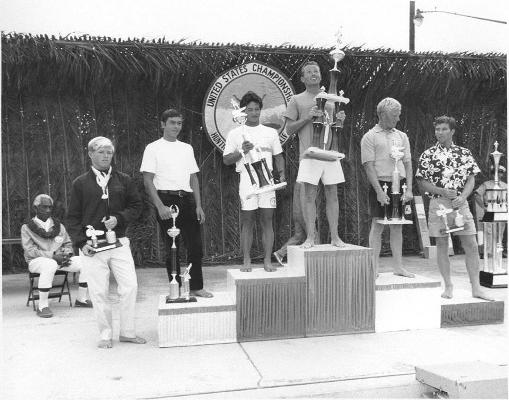 Donald and the Hawaiian invasion

In 1950, the first issue of Surfer Magazine hit the stands with a bitchin’ photo of Donald Takayama in full flight, crouching with his front foot extended toward the nose racing through a thick Ala Moana bowl. I was a 12 year old eighth grade gremmie drooling over the photo while choking down a Hostess Twinkie during lunch at Pier Avenue Junior High (now theHermosa BeachCommunity Center).

I wasn’t alone, with Billy Ray James, Dru Harrison, John Baker, Don Craig, Mike Stevenson, and Sparky Hudson all climbing over my back to get a closer look at Donald’s classic style.

The following Friday night Bruce Brown, of Endless Summer fame, showed “Slippery When Wet at Pier” Avenue Auditorium. It was my first surf movie and Bruce’s, too. Dale Velzy helped Bruce finance a trip toHawaiito shoot his surf team. The highlight was when they found a spot just pastSunsetBeachwhere the Velzy Team tore it apart. Bruce named the spot Velzyland as a thank you to Dale for sponsoring his film.

While Dewey Weber ripped the rights Donald Takayama shredded the shallow lefts. Donald made the lefts look so good that until my first time out at Velzyland I thought it was a left. Maybe it was his cute, almost baby faced or his tiny 5-foot-4 frame that was almost troll like that made us relate to him. We all wanted to surf like him with his beautiful arch bottom turns into the full trim slot on the fastest part of the wave before down shifting into a beautiful half drop-knee cutback, and he could ride the nose. He dominated Ala Moana in the late ‘50s and ‘60s the way Gerry Lopez did Pipeline in the 70s.

Donald was only 12 years old in 1957 when he used the money from his paper route to purchase a one way ticket toCaliforniaand shape for Dale Velzy. Hap Jacobs became Dale’s partner shortly thereafter and took Donald with him toHermosa Beachwhen Velzy/Jacobs split up a few years later.

It was because of Donald that several other big name Hawaiian surfers came toHermosa Beach. They included Chubby Mitchell, Peter Pope and Harold Iggy in the early ‘60s and then David Nuuhiwa, StanleyParks, Jock Sutherland and Joey Hamasaki in the mid ‘60s. Donald had a full house with Ben Aipa, Larry Bertleman, Michael Ho, Buttons Kaluhiokalani, Dane Kealoha, and Mark Lidell in the ‘70s.

I got to know Donald in the early ‘60s while surfing with him on the Jacobs Surf Team and at the Windansea Surf Club. Donald was a good contest surfer and consistent finalist. He didn’t win too many contests but he finished in the top three of every contest he entered. The only way to beat him was to stay away from him. I gave Donald space and all the lefts while I did my own thing on the rights.

One day Hap Jacobs almost smacked me for not repairing a ding in the nose of my board. The ding zippered with the fiberglass, peeling half way down my beautiful three reverse T-band classic surfboard bottom. I wanted another new one while it was getting repaired. Hap turned candy apple red in the face as he headed toward. Luckily, Donald jumped between us, taking me to the back of the shop. Donald gave me his own 8-foot-3 stick-white paneled surfboard to use while my 9-foot-6 was being repaired. I was 15 and stupid and said, “This board is way too small for me.” I was the same size as Donald and four years younger. That little 8-foot surfboard was the best board I had during the longboard era. To this day I consider giving it back one of the biggest mistakes of my surfing career.

Hap Jacobs had the best surf team and a lot of the stars wanted their own model after the Hobie Phil Edwards Model came out. Hap didn’t think it was fair to give one surfer a model and not the others. So, Mike Doyle left Jacobs for Hansen and Mickey Dora talked Greg Noll into copying the Yater Spoon to make his Da Cat Model. Donald Takayama left and went a few blocks down PCH to Bing.

Bing came out with the Donald Takayama Model. Dru Harrison left the Jacobs Surf Team just to ride one. Dewey Weber got Donald’s best friend Harold Ige to make a Weber three stringer and Rick imported Hawaiian surfer/shaper Barry Kanaiaupuni to make one for him whileSan Diego’s Mike Hynson tried his best to emulate it for Gordon and Smith.

They all failed. The Donald Takayama Model was the best three stringer surfboard model on the coast.

Right before all this happened 17-year-old David Nuuhiwa came to the mainland to stay with Donald. Donald took David with him from the Jacobs Surf Team to Bing. The 6-foot-something teenager became the Michael Jackson of surfing overnight by standing on the nose longer than any surfer. He had the same smooth style as Donald but was tall enough to be capturing the judge’s attention, winning every contest on the coast.

Soon, Bing came out with the David Nuuiwhia Noserider. Dru Harrison went to Rick Surfboards and came out with his nose riding model called The Improviser and even Hap caved in, giving Lance Carson a model and me The Mike Purpus Model. Mine was a nose rider a little thinner than David’s and narrower than Dru’s. The signature models were selling faster than pancakes at a fat camp but David’s model was a huge bonanza for Bing. He couldn’t keep up with the orders.

Bing had three shapers making nothing but David Nuuhiwa Noseriders. Donald’s classic three stringer model was slowing down so Bing asked Donald to shape David’s nose riders. The other shapers started teasing Donald relentless until one day when David walked into the Bing factory and asked Donald why he can’t keep up with all of his orders. Little Donald went berserk. He turned from the lovable Poo Bear into the Tasmanian Devil. Bing’s factory looked like a giant brawl in a John Wayne western bar fight. One of Bing’s shapers broke his arm and everyone else got banged up good except David who ran out the backdoor as fast.

In 1967 I went with Skip Frye, Steve Bigler, Margo Godfrey and other top surfers of the Windansea Surf Club toAustraliato film “The Fantastic Plastic Machines.” The movie was secondary to witnessing the conception and birth of the shortboard revolution. When I returned, the long 10’ noserider was giving way to the light-weight offspring shortboard, starting with the 8-foot V-bottom. I had the perfect V-bottom template when I returned toCalifornia. I used the nose of the Midget Farrelly and the tail of the Bob McTavish V-bottom. Ricky James, Robert August and I spent several hours getting the template and the shape perfect for my Hap Jacobs Mike Purpus V-bottom Model.

It was gorgeous but Hap Jacobs couldn’t stop laughing. “I can’t make that. Nobody will buy it.”

Donald was even more negative because the Hawaiians were going in a totally opposite shortboard direction with the mini-gun.

Hap agreed. Donald said, “Don’t worry I won’t be making any of those.”

I went to the shop everyday and when anyone looked at my V-bottom I got his phone number and took him surfing. The Mike Purpus V-bottom Model became Hap’s biggest seller overnight.

Donald could see the David Nuuiwhia Noserider ordeal starting all over when his top riders Bobby Warchola, Jim Lester, Tommy Padaca and Pee Wee Crawford, wanted V-bottom’s. Donald made them V-bottoms with his decal on them. I went crying straight to Hap, who told Donald that a deal was a deal. If he wanted to make a V-bottom he would have to use my decal. Donald was furious at me and left Jacobs to open his own shop down the road by the Baskin Robins 31 Flavors in Redondo Beach. Hap remained best friends with Donald, but as far as I was concerned the divorce was final. As I look back, I should’ve asked Donald to work together on shortboard designs, using both our names but I was way too immature and wouldn’t reach puberty for several more years.

In the ‘70s Donald and I only saw each other surfing at contests. Donald transcended his long board style and moved on to shortboard eggs with turned down rails. He was still making the finals.

He closed his shop inRedondo Beachand moved down south to Encinitas. I would go down south to surf and stay with my friends Gary Goodrum and Alan Byrnes from New Zealand. They were renting a cute, little three bedroom house in Encinitas right in front of the surf spot Stone Steps. It was for sale for $27,000. My father bought the house right out from under Gary Goodrum’s father. Gary and Alan continued to rent the house for the next two years with my parents fixing it up on weekends.

It turned out that Donald lived right behind them. My parents were old friends with Donald from watching us compete against each other since the early ‘60s. Donald would spend one day a week visiting with my dad. My parents eventually sold the house and bought a bigger house in Encinitas, right off the La Costa exit on the 405. Donald continued to come by and visit with my father until my Dad passed away.

I didn’t see Donald much except at the Dewey Weber Longboard Contest’s, the Oceanside Longboard Contests, which Donald helped organize and the Lance Carson Malibu Longboard Contests. At one of theMalibucontests Donald was sitting with David Nuuwhia,Chinaand the rest of the Waikiki Beach Boy’s. Donald had a beautiful, 20 year old Hawaiian girl wearing a fluorescent pink thong with him. He gave me a big hug and introduced me to the boys.

I said “Who’s the girl”. He said “It’s my daughter. She just did a layout for Playboy’s Playmate of the Month.” Suddenly it was the 60s and we were good friends again.

Donald was the epitome of Hawaiian surfing. He surfed with speed and grace that made surfing beautiful. He never shaped a surfboard. He sculptured works of art, taking his time to make sure it was perfect. He was friendly, helpful to everyone and fun to be around. He was the Aloha Spirit that made him the center of attention where ever he went. God I miss him. DZ