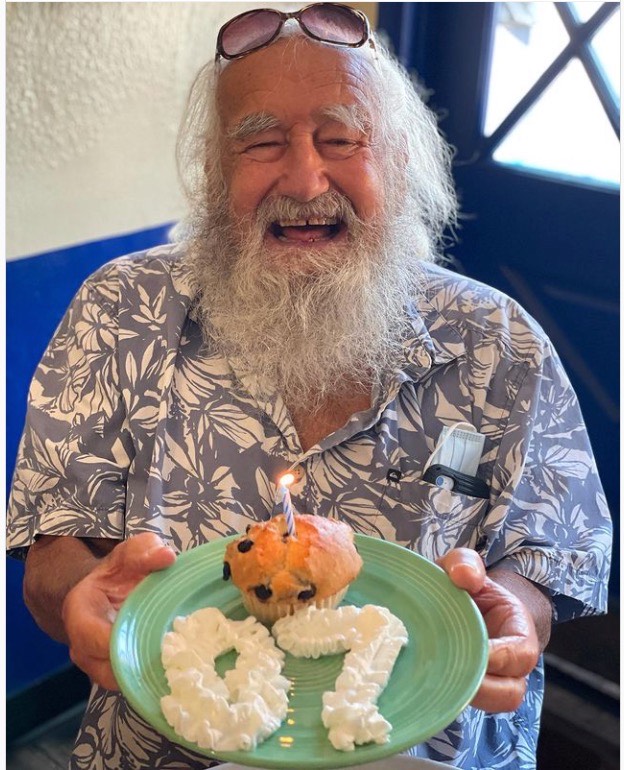 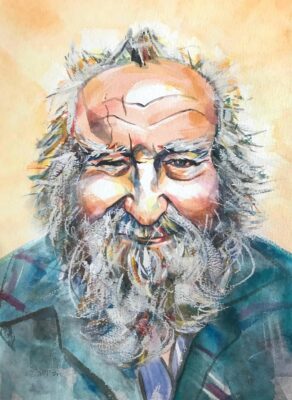 Every town has certain elements that define it. Manhattan Beach has the sun, the sand, the pier, and until recently, a boisterously bearded and cheerful man named Michael McNulty who could be found every day for the last 50 years at Uncle Bill’s Pancake House from early afternoon till closing time at 3 p.m.

McNulty passed away on February 23 from complications following a fall. He was 87. He spent his earliest years in Los Angeles and became a local resident in the early 1950s. He worked variously as a pipefitter for local refineries, proudly within the aviation industry during the era spanning the NASA Apollo mission, and later as a pool cleaner tending to the mansions of Beverly Hills. But for the last decades of his life, McNulty mainly honed the fine art of living perfect days in Manhattan Beach.

“His routine was to wake up close to noon, get to Uncle Bill’s and close the place, then he would buy some juices from the juice store [across the street], drive to the bottom, north side parking lot at the MB pier, people watch and check the waves, then drive back home and meditate till sunset,” said Jaren Barredo, who was McNulty’s housemate and caretaker the last years of his life. “Then he’d call people, and in his later years call his son, Chuck [Wilson], and describe the sunset.”

McNulty began going to Uncle Bill’s as a teenager in 1951 and never stopped. His friend Scott Chambers said McNulty was at the head of the pack of a group of everyday regulars who saw each other, argued politics, and told jokes.

“I’ve been going to Uncle Bill’s for 30 years, and he was the old-timer when I started,” Chambers said.

McNulty ordered the same meal every day —  blueberry waffles with avocado on the side and poached eggs —  except on rare occasions when one of his favorite waitresses, Gloria, would talk him into something else. The current owner of Uncle Bills, Matt Van Amburgh, took over the restaurant from his father, Paul, who bought it in 1973.

“Little did we know when we were buying this little diner in Manhattan Beach, we were also buying Mike McNulty,” Matt Van Amburgh said. “We inherited Mike.”

“Michael was a fixture in Manhattan Beach —  I mean, at least at Uncle Bill’s,” Chambers said. “He was there literally every day….A lot of the locals called him the unofficial mayor of Manhattan Beach. He had a love for everybody, and such a rich, unique outlook on life.”

McNulty met and eventually married the love of his life, Diane Florence, in the 1950s. For the first half of his tenure as a regular at Uncle Bill’s, his wife was his daily dining companion.

“They were the cutest, sweetest couple,” Van Amburgh said. “They were very protective of the employees at Uncle Bill’s, and they brought us a lot of business. The counter at Uncle Bill’s is like the bar at Cheers.”

Diane passed away in 2004. Barredo said McNulty fell into sadness for a while after his wife’s passing, but his daily routine and love for other locals eventually lifted him back up. He would have been sober 52 years this October, Barredo said, noting that he liked to help others on their journey to sobriety.

​​“He would always say to people, ‘Keep on keepin’ on,’” Barredo said. “If they were having a hard time, he would always say, ‘God loves you and so do I!’ Oh, and how can I forget the infamous, ‘Hasta la bye-bye’?”

Barredo said living with McNulty had its challenges. He invariably tracked tar from the beach around the house, and mornings, he often walked around the backyard in his birthday suit.

“The old neighbor here, she was always like, ‘I can’t…’ He was always walking around naked out back. He’d been doing it since he was younger,” Barredo recalled. “I said, ‘Yeah, that’s my daily, man. I can’t bring people here in the morning.’ He was such a handful. He was a pretty happy dude.”

Chambers said he and McNulty often sat together outside Uncle Bill’s during the pandemic lockdown when they could only order takeout, and his friend’s often outlandish appearance attracted a lot of attention.

“He looked very gruff,” Chambers said. “If you didn’t know him, you might think he was homeless. He grew out his gray hair and a gray beard. Little kids used to walk by, and I used to tell them, ‘This is Santa Claus on summer vacation.’”

“He had such a loving soul, for everyone,” Chambers said. “You know, he always talked to strangers, and they’d fall in love with him. He sat at the counter at Uncle Bill’s.”

“He was larger than life,” said Van Amburgh. “He was the James Stewart and the Mickey Rooney of Manhattan Beach.”

In lieu of flowers, memorial contributions can be made to the LA Zoo in Michael F. McNulty’s name.