Intermittently brilliant in a Torrance mini-mall 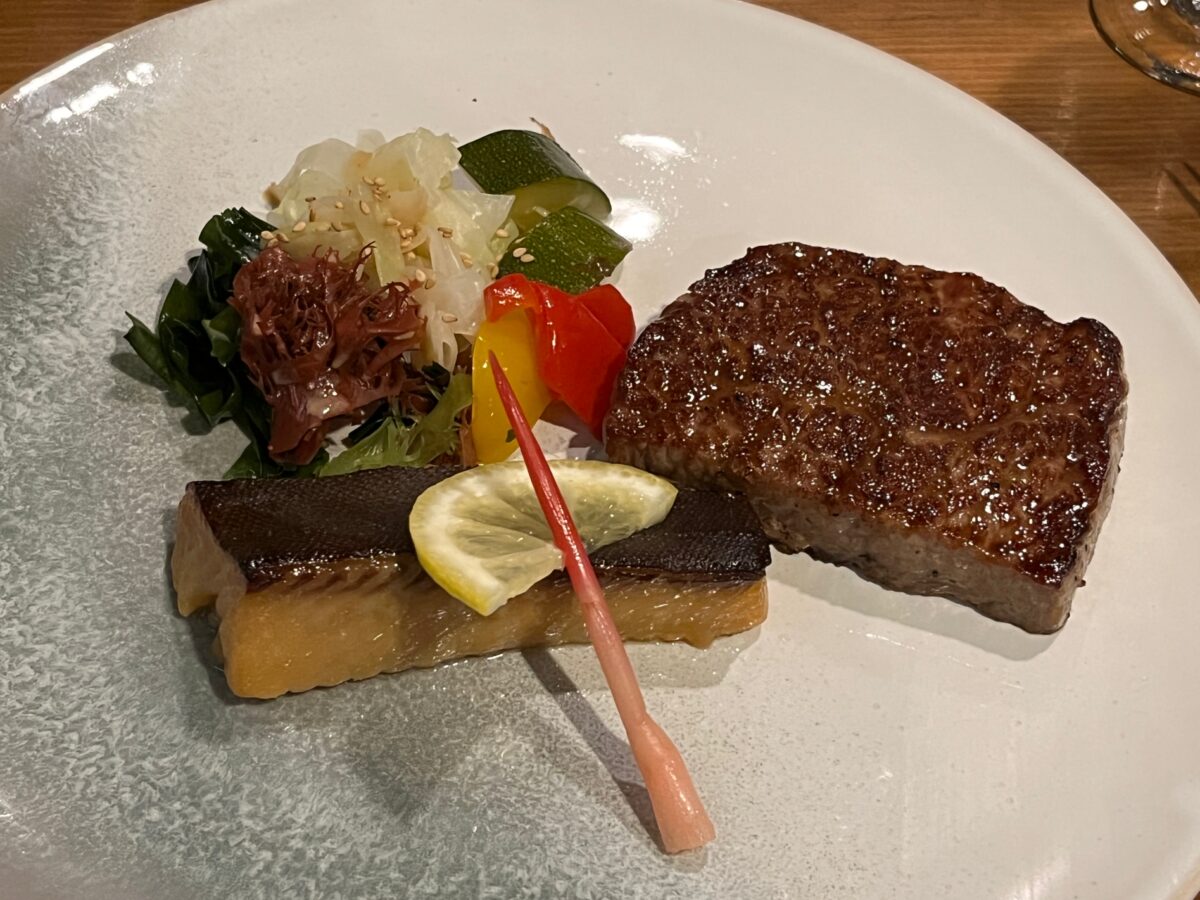 The most expensive steaks in the world come from Japan, which is ironic for those who know history. For over a thousand years the Japanese ate no beef at all. In that Buddhist country, anyone who consumed as much as a mouthful was required to do penance for 150 days. When the modernizing Emperor Meiji ate beef to encourage his subjects to adopt Western dietary practices, it shocked the populace and sparked a riot by enraged Buddhist monks.

The Japanese are celebrating beef now, particularly with a style of dining that puts an American-style steak alongside Japanese sides, and serves it with sake or cocktails rather than wine. It can be fantastic when done right, because the tart vinegars and tangy seaweed that are typical in Japanese dishes are a better counterpoint to a rich steak than the usual baked potato and plain vegetables.

If you’d like to try that combination for yourself, head for a restaurant that seems to reflect that duality by having two names — it is known both as Wa Dining and the I-Naba Steakhouse. There’s a logic behind both names – Wa is the Japanese word for harmony, and I-Naba is the respected local restaurant chain that operates the place. 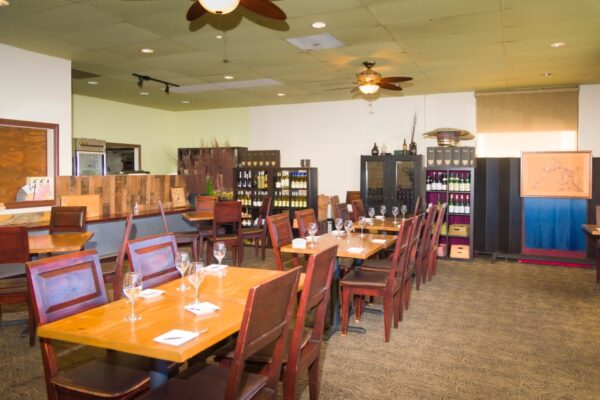 The interior of Wa Dining is understated in the Japanese minimalist teradition. Photo by Tony LaBruno

The interior is bland and unadorned. The most characterful aspect of the environment is the soundtrack of jazz versions of rock songs – a sweet voiced vocalist was crooning a Bon Jovi tune as we entered. We were seated and given menus that included a respectable a la carte selection and also a selection of omakase options – five course meals in which the only difference is the type of steak or seafood main item. These range from $55 for a choice of miso salmon or Angus New York steak, to $155 for a combo plate of Wagyu steak and miso black cod combo. My dining companion had never tasted premium Japanese wagyu beef and we were celebrating seeing each other for the first time in three years, so we splurged and ordered one wagyu with cod and a $65 meal with a prime ribeye as a main course.

We then selected beverages from an excellent list of sakes, but a mediocre by-the-glass wine selection. Our server, who was fluent, charming, and knowledgeable, mentioned that they know the wine list could use some work, and those who are particular about white wines in particular often bring their own. My companion ordered an Izumi Judan Ginjo sake, and I selected a Ferrari-Carano Sauvignon Blanc to go with the starters because I wanted to try pairings with both beverages. 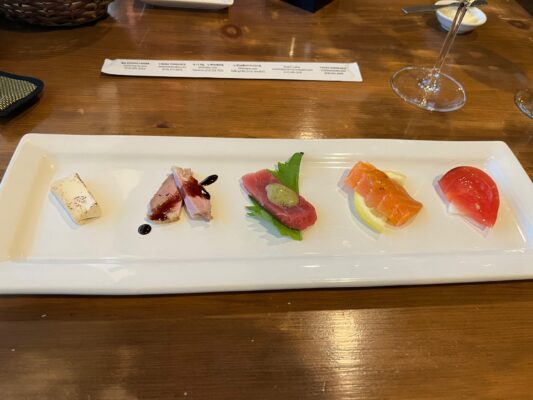 The first item to arrive was an amuse-bouche with five nibbles: marinated Japanese tomato on daikon, salmon with bell pepper salsa, tuna sashimi on shiso leaf with yuzu-ponzu sauce, duck breast with a drizzle of thick soy, and miso-marinated cream cheese. When eaten in order with the tomato first, it was like an octave of flavor and richness, with one bite of each note on the scale. It’s a great way to start a meal, and let us know that great things were to be expected.

Things faltered just a bit on the second course, a cream corn soup that arrived scalding hot. We sipped at dabs from our spoons as it cooled, and wondered if we were missing something – it was a decent sweet puree of corn and cream, with mild seasoning, but nothing special. A sprinkle of parsley added a mild aromatic scent, and some color, but it was otherwise very simple. This is a Japanese favorite soup, but we thought some corn kernels or onion would have added a bit of texture and made it more interesting.

Things picked up with the third starter, bits of chicken “nanban zuke”, escabeche Japanese style, served with housemade tartar sauce. The chicken bits were slow-braised in vinegar, soy sauce, and onion, which created a dense, moist texture and a slightly pickled flavor that was accented by the tartar sauce. It was an excellent follow-up to the creamy, sweet soup and made sense as one step within a procession of flavors.

And then came the main events: eight ounces of prime Nebraska ribeye, four ounces of wagyu New York, and a piece of black cod marinated in miso, with accompaniments. We also received rice and a delicious onion sauce, though I ended up taking most of the sauce home because those steaks were so good without it. It wasn’t about fancy seasoning, since there was nothing on the meat but salt, pepper, and butter. It was that this was meat that was really worth savoring.

We had asked for both to be cooked as the chef suggested, and they arrived on the rare side of medium rare. The butter glaze had given both meats a glossy look but did not make them appreciably more fatty in the eating, something I had been concerned about because I’ve had wagyu that was so rich that it was like eating butter. This wagyu was the most tender New York I can remember having, with a little smokiness from the grill accenting the umami-laden meat. The four-ounce portion sounds small, but was quite sufficient along with the delectable codfish in sweet miso sauce, and a pretty array of assorted seaweed and vegetables.

The ribeye had a more American presentation, the steak atop two big slices of grilled onion. Whole atop the third was a small mound of mashed potatoes topped with decoratively arranged slices of grilled zucchini, portobello mushroom, and orange bell pepper. Alternating slices of the wagyu and American beef reminded you that these really are different animals – European cows put on fat in big lumps next to chunks of meat, while the wagyu’s fat is marbled throughout the animal so the texture is more silky and regular. The American steak has a more intense flavor that is revealed as you chew it, while the wagyu flavor is milder but distinctive in a way that defies description. Trying them both, as you can when you come to I-Naba/Wa Dining, is a rare and wonderful treat.

I had a glass of Inconspicuous Vineyards Sonoma Zinfandel, a good pairing with the meat, but not a great one. If you enjoy good wines with dinner, order by the bottle or take advantage of the fact that corkage is only $15, and bring your own. Your other alternative is to get sake, and the more I sipped the Izumi Judan, the better that idea seemed for the next visit.

After those rich meals we were in the mood for a mere morsel of dessert, and that’s included along with your choice of coffee or tea. We had decaf coffees with a piece of tiramisu and a green tea crème brulee. The tiramisu fit Japanese ideas of pastry, on the sweet side with little or no marsala wine flavor, which isn’t my style. We were much happier with the flavors in the crème brulee topped with matcha green tea, except for one problem: the essence of a crème brulee is that the top has been torched or broiled to crisp it, and they seem to have forgotten this step. The flavor was excellent but it was a sweet custard without that shell.

My wife hadn’t been able to join us, so I ordered a sliced roasted duck breast and a shrimp and seaweed salad to take home for her. The duck breast was good enough that I’m surprised it isn’t offered as the centerpiece of an omakase dinner, and the shrimp and seaweed salad was amply portioned, fresh and tangy. It’s proof that there’s more to this kitchen than steak, however much the focus may be on that item. 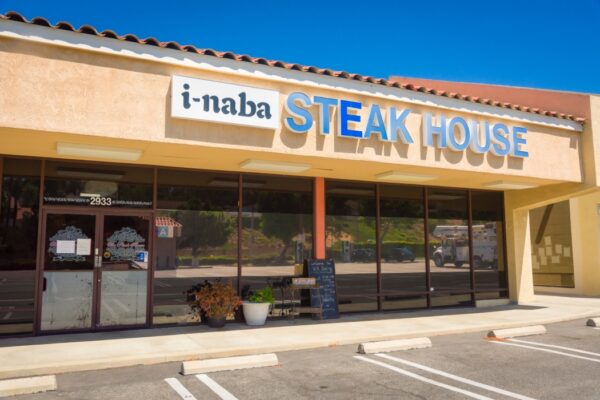 The exterior at Wa Dining/I-Naba Steakhouse. Photo by Tony LaBruno.

Dinner at Wa Dining/I-Naba Steakhouse is an affordable luxury if you stick to the $55 or $65 entrees, and a worthwhile splurge if you go for the $135 or $155 levels. The service is excellent, and though not everything hit my palate on the bullseye, there were enough winners that I’ll happily return.