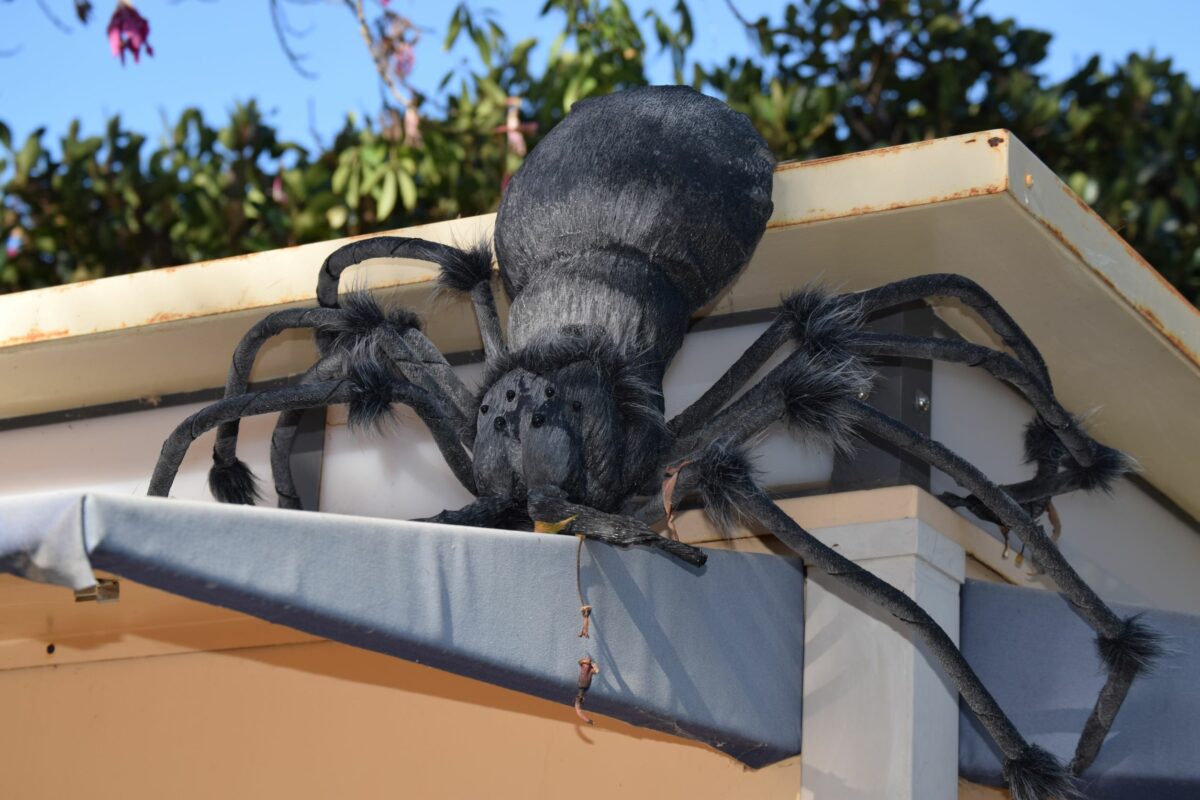 A giant tarantula, spotted on the roof of the local gift shop. Photo by Bondo Wyszpolski

Spiders from Mars… and other 8-legged wonders 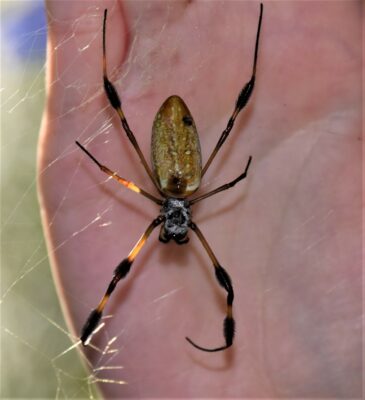 Visitors to the Spider Pavilion, a tent-like enclosure at the South Coast Botanic Garden, are greeted near the entrance by a tarantula of gargantuan proportions. It’s either a signal to turn around and go home or to bravely step forward and enjoy your arachnid experience.

Open through Nov. 30, by which point most of the inhabitants will have dropped dead (short shelf life, you know), the Spider Pavilion features tarantulas in terrariums as well as a multitude of orb-weavers, garden and orchard spiders. Most of them are perched in their webs high overhead or tucked away among the plants. As long as you stay on the path you’ll probably be okay. 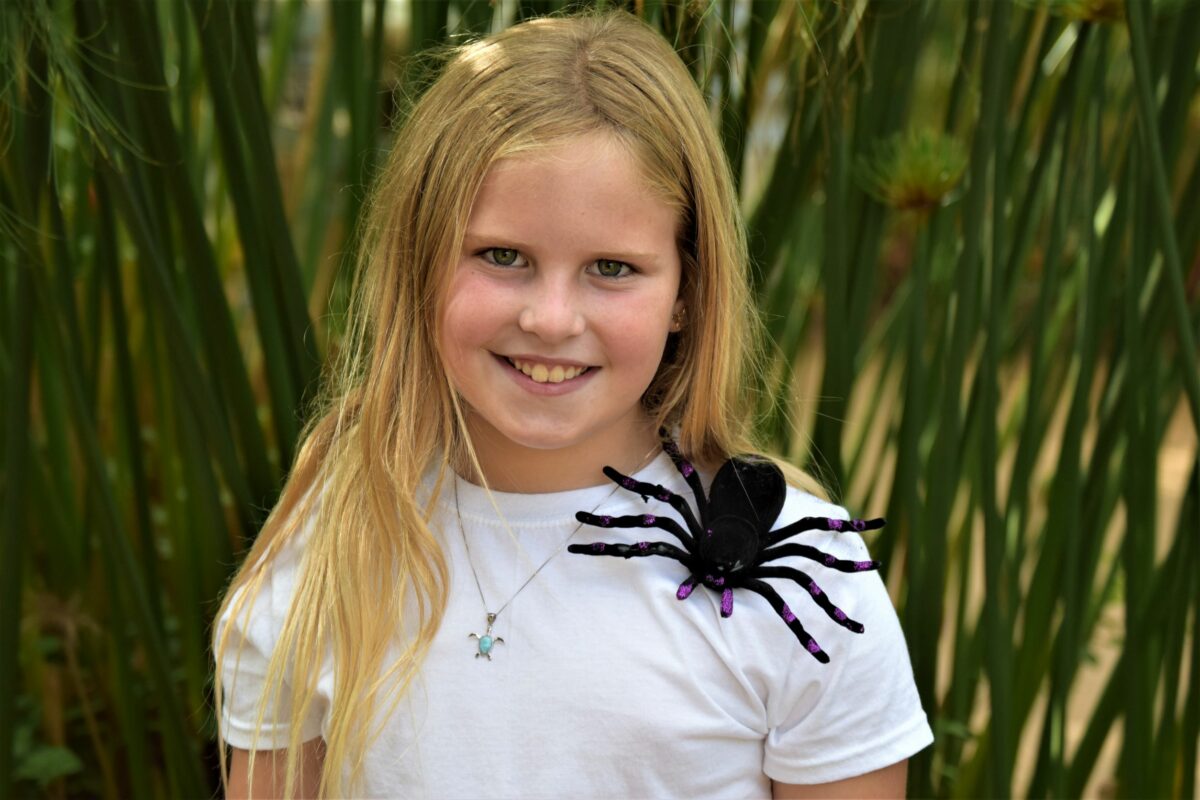 Merrick McCaw was brave enough to let a tarantula perch on her shoulder. This is a rare, seasonal spider, only found in exotic places like the Lomita 99¢ store. Photo by Bondo Wyszpolski

The setup is the same as the one used for SOAR, when the Spider Pavilion was a butterfly pavilion.

You’ll be accompanied by a docent (and a medic… just kidding) who’ll explain where these critters came from (for most of them, a one-way ticket from Louisiana) and what they eat (crickets and mealworms; perhaps your child’s index finger). They’ll also point out where some of the more spectacular specimens may be lurking. 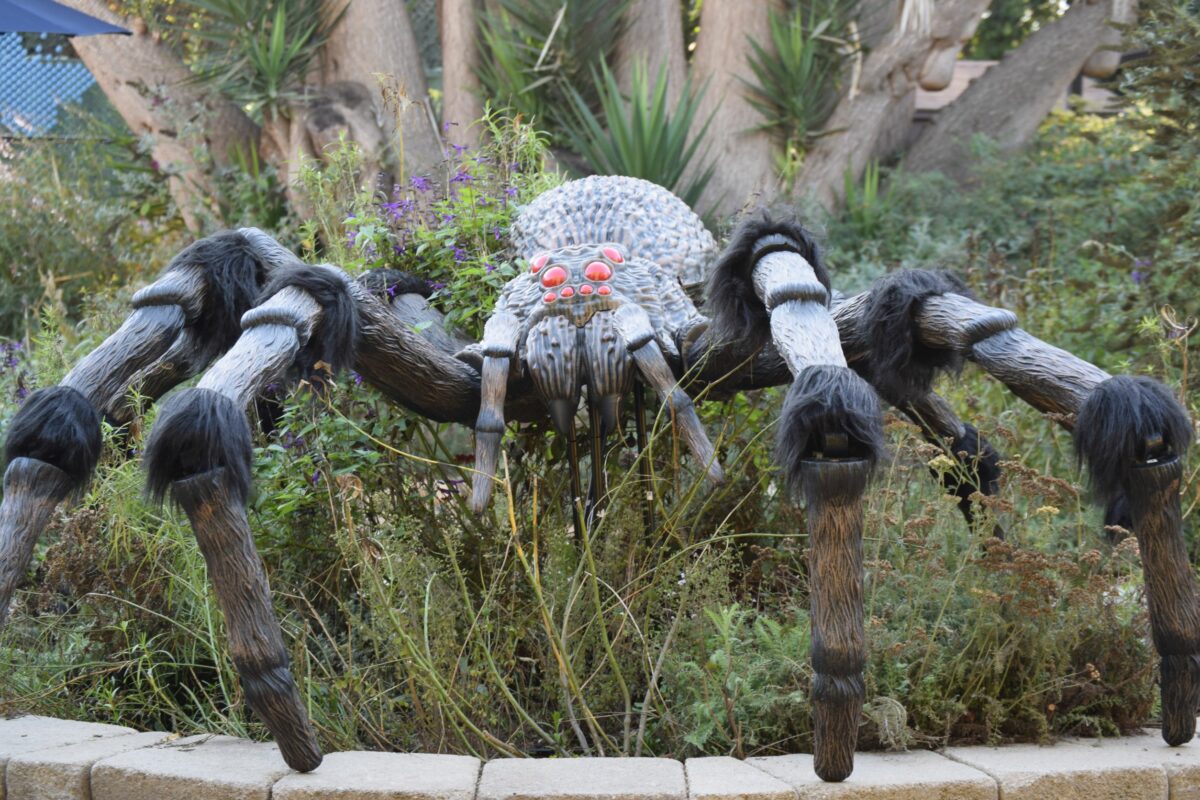 At about six feet in width, this is clearly the Spider Pavilion’s god or guardian. Photo by Bondo Wyszpolski

Outside of the entrance is a Spider Wall with lots of brown and black widows (the brown widow is an invasive species, first discovered in Torrance. Really). You won’t be interacting with these guys. The orb-weavers, on the other hand (not that you want them on your hand), are less likely to scramble up your leg or settle into your hair. 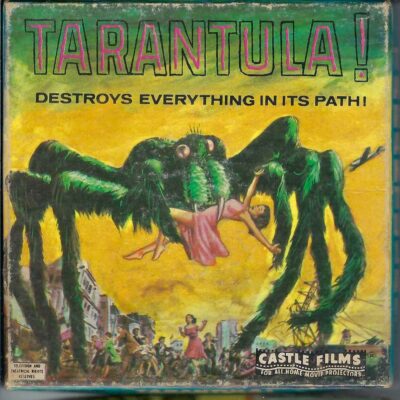 Tickets are timed, and you get 30 minutes to look around. That seems long enough since the Pavilion is no larger than a two-car garage. It’s open daily from 10 a.m. to 5 p.m., but one docent told me he thought the best viewing time might be early afternoon. Through Nov. 19 there’s a tarantula meet and greet each Saturday from 11 to 12 noon.

If you’re a member, a walk through the Spider Pavilion is an extra five bucks, and seven dollars for non-members with entry into the garden, which is $22 for adults and less for seniors and kids.