Jackson’s is back, better than ever in El Segundo [RESTAURANT REVIEW] 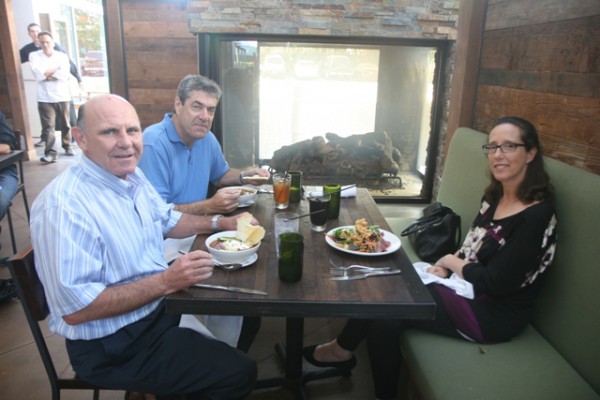 Returning to a restaurant you haven’t visited in a while can be like bumping into an old friend at a party – you’re glad to see them and eager to relive the good old days, but in the back of your mind, you worry that either you or they might have changed too much for you to relate to one another. It happens, but at other times the old relationship can even be strengthened when you discover that both of you have grown in ways the other can appreciate.

Such were my thoughts on visiting Jackson’s Food and Drink in El Segundo, a reincarnation of Jackson’s Village Bistro in Hermosa. The old and new restaurants aren’t exactly alike in style; the Hermosa location deserved the bistro name for their low-key look, while the new has a more modern dining lounge ambiance. The design of the patio in particular is striking, unpainted wood, weathered metal, and a stone fireplace creating a welcoming, slightly weathered look in a place that has only been open for a few months.

The menu here is recognizably a creation of the same chef, but Scott Cooper has evidently become more adventurous in the four years since he last cooked in the area. You can get a steak, burger, or roast chicken, but this menu has a lot more daring items than I remember from the bistro.

This menu has many small plate options, and our server encouraged us to order several of these and consider sharing an entree. We began with grilled salmon glazed in honey-pomegranate sauce, a spinach pizza, blistered sugar snap peas, and a bowl of butternut squash soup with cheddar cheese and apples. (We had considered a charcuterie and cheese board based on seeing one on its way to another table, but decided we’d learn more about the kitchen from the things we ordered.)

The peas arrived first and made an immediate impression; the seared pods in lemon oil and zest with mint were marvelously fragrant – so much so, in fact, that I wondered if I was going to taste something other than mint and lemon. The first bite answered that – the crisp peas had a vegetable sweetness that balanced the lemon tartness, and it worked magnificently. The honey-pomegranate salmon was working the same territory of sweet and sour flavors balanced against a savory item, in this case lightly grilled fish with an almost liquidly soft interior – it was cooked just to hotness in the center and still had the natural texture. The fish was served over whole-grain couscous with almonds, herbs, and raisins, making a beautiful plate that could also have been an excellent light lunch or main course.

Compared to those culinary high-wire acts the soup was a subtle joy reminiscent of home-style cooking, squash sweetness, apple tartness, and the richness of cheddar blended together. There were no fireworks here, just solid good cooking.

I usually prefer wine with my meals, but was so intrigued by the Tongva Sour, a mix of fresh sage, black grapes, gin, acai liqueur, and lemon that I had to try one. The Tongva tribe roamed this area before the arrival of Europeans, but they didn’t drink this well – the only thing from this drink they might have recognized was the sage. It is a nifty concoction, cooling with the herbal acai and sage, and I’d recommend it for those who like fancy drinks. For those who don’t there is a short but well-chosen list of soft drinks, wines by the glass, and craft beers, plus a more expansive bottle list.

We continued with a “Spinach flatbread pizza” which I put in quoted only because I’m bemused by the redundancy – a pizza was historically a flat bread, so why the extra verbiage? Whatever you call it, this one was very thin and crisp, topped dollops of spinach with crème fraiche, olive oil, parmesan and garlic. The flavors were perfect, the large lumps of spinach less so – this would have been better if the spinach had been more evenly distributed. When Chef Cooper stopped by our table in the course of his evening stroll around the restaurant I mentioned my observation to him, and he said he might change that aspect of the presentation.

We finished our savories with a pair of shard entrees – fresh cavatelli pasta with homemade fennel sausage and a filet steak with gorgonzola sauce, polenta, and asparagus. We selected the steak as a counterpoint to the more exotic items, figuring we’d see what this kitchen could do with a simple item that’s all about technique. The meat arrived the perfect medium rare we had requested, slightly smoky from the grill, and on a bed of tangy, slightly funky cheese sauce, with a large serving of asparagus and a crisp polenta cake with plenty of corn flavor. As good as it was, it was slightly outshone by the pasta, thanks to the way the Tuscan kale, delicately sharp fennel, and tomato played off each other. This was Italian-style pasta, the flavors distinct and not drowned in tomato sauce, and it was perfect.

We had accidentally ordered the perfect amount – the shared plates and two entrees left us just enough room for a pair of desserts. The blackberry pie was excellent, the banana flambé a little too sweet for my taste.

Our lavish dinner for three, with four glasses of wine and a cocktail, ran $164, of which the food cost was about $100. By the standards of the South Bay this is not excessive for an experience of this quality, and measured against greater Los Angeles it’s a deal. Jackson’s is back, all we liked about the old bistro but a little more grown up and sophisticated, and it’s a new destination in the area.