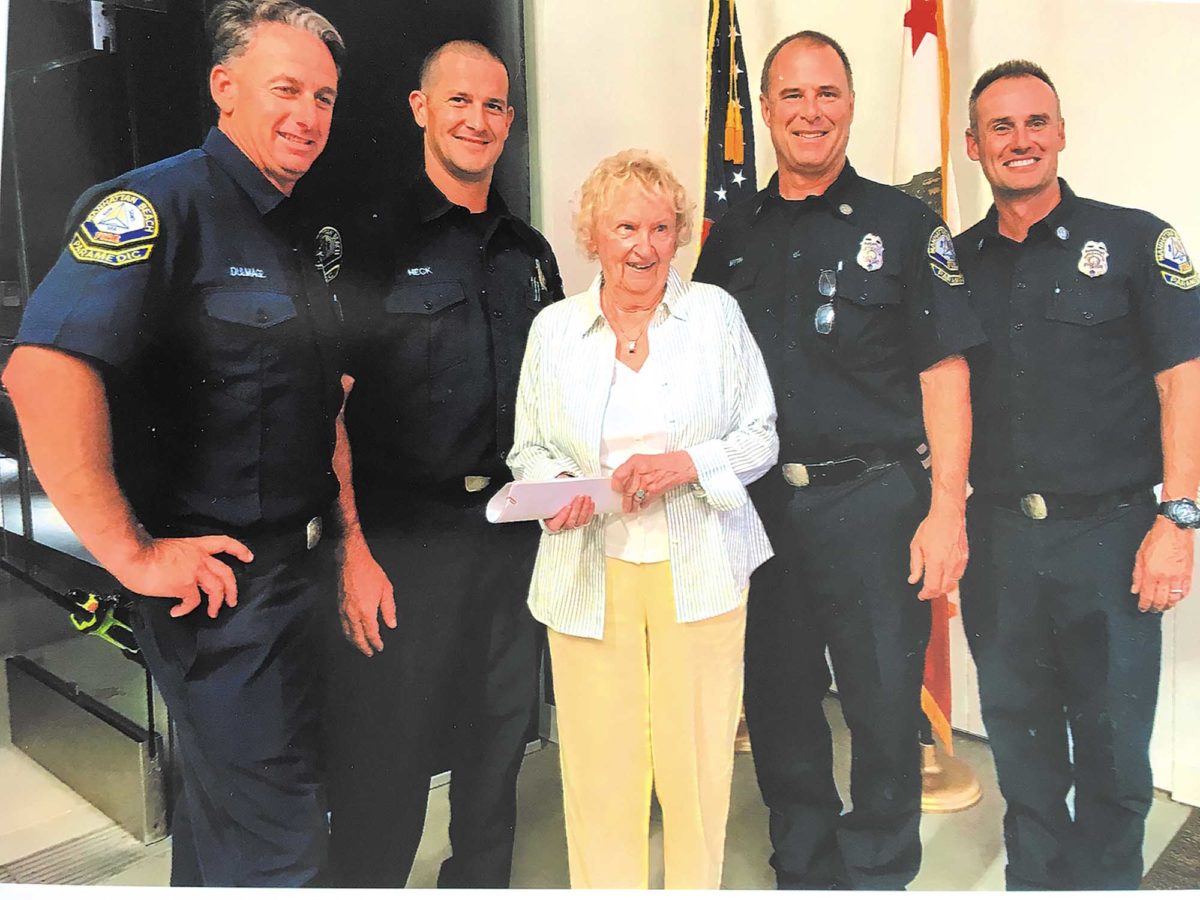 The original fire department in Manhattan Beach consisted of a two-wheel hose cart and two local volunteers, W.W. Peppers and E. Patmore, who could be summoned to put it in action by way of their Model T truck. This was before the city’s incorporation in 1912, and before the department was in any way formalized. It wouldn’t be until 1923 that a somewhat more organized department was officially formed.

That first department would likewise not be called the Manhattan Beach Fire Department, but instead, The Lion Tamer’s Club Volunteer Fire Department. Initiation into the club included a mock funeral procession and a blindfold ride down a sand dune in a Bozeman chair attached to a cable, a rite that ended when a heavy-set aspiring firefighter fell from the apparatus and nearly caused a real funeral procession.

These and other colorful elements comprising the century-long history of organized firefighting in Manhattan Beach are the subject matter for Jan Dennis’ ninth and final book, “Manhattan Beach Fire Department,” which just published last month. Dennis, a former councilperson and a 58-year resident of Manhattan Beach, has over the course of her nine volumes covered what amounts to the nearly complete annals of the city’s history — including a history of its pier, of women’s roles in the city’s history, of architecture, the police department, and of the city’s main thoroughfare, Sepulveda.

“So they are there forever,” Dennis said. “This is my last book, unless I write my memoir. I’m not going to be writing any more books about history.”

Her accidental career as a historian came when Dennis was serving as mayor in 1987 and she implored the council to commission a city history.

“They chimed in, ‘For heaven’s sake, there is no history…If you want a book, go write it,’” Dennis recalled. “And I said, ‘Okay, I will.’ Driving home that night, I said, ‘What the heck have I gotten myself into?’ It was on public television I’d opened my mouth, so I said, well, I guess I’ll do it. I started the research the very next day.”

That first book, an all-encompassing city history titled, “A Walk Beside the Sea,” was completed by the end of that year, and Dennis was off and running. 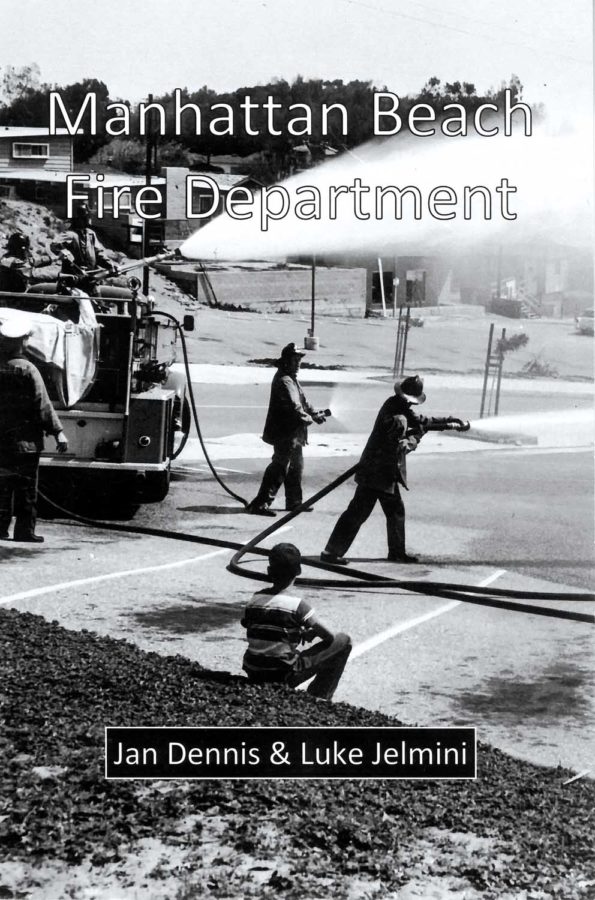 “I just became so fascinated with the research, and going through it, I realized there was so much in this town no one had ever written about,” she said. “People didn’t know.”

“My whole philosophy is you believe in yourself,” she added. “Be honest with yourself and think for yourself. We live in the present and learn from the past.”

Fittingly, her new book arrives at a key crux locally between past and present, just as the city considers replacing the department with county services.

The power of history is often in its specificity, and Dennis’ 160-page tour through the annals of MBFD is rich in character, beginning with the checkered history of the city’s very first paid fireman and fire chief, Harry Hicks, who’d worked for the City of LA as a fireman for two decades and ended up at one point in considerable debt to the city. But as Dennis noted, he “kept his nose clean enough” to be hired as MBFD chief in 1924, and then took residence, along with his wife, in rooms above the fire station. He was considered on duty 24 hours a day, but eventually was compelled by state law to take four days off each month, as one of the 10 volunteers would fill in “though he stubbornly would resist each time,” Dennis writes. Finally, in 1929, a relief fireman, Rothwell H. Swain, was hired to spell Hicks, although he had other duties, as well, including as police desk sergeant, janitor, and gardener. By 1930, the volunteer fire crew had sleeping quarters in the basement of City Hall, where an 11 ft. by 11 ft. room was also made suitable for Chief Hicks and his wife’s living quarters.

During the Great Depression, the MBFD took on other duties, including handing out meal tickets to families in need, redeemable at the beloved local restaurant, the Green Shack. In 1937, the Works Progress Administration helped give MBFD a proper station, expanding City Hall to include a large garage for police and fire. Also that year, the city experienced one of its biggest fires, as flames engulfed 75 acres in the southeast section of town. In 1941, the Marine Pavillion, a stop for the Red Car rail line and home of the Badminton Club, was destroyed by fire. By 1943, MBFD was bustling, responding to 51 grass fires, 13 house alarms, six automobile fires, and 12 other miscellaneous calls.

Dennis follows MBFD’s growth right up until the present day, ending with the appointment of Chief Daryn Drum. She details the growth of its paramedic services, which started in 1973 when five firefighters were trained as paramedics and Manhattan Beach became only the fifth city to include such medical assistance in its fire service; by 1975, rescue calls had increased to 1,045 from 146 in 1971. By 1988, 19 of 30 sworn personnel were certified paramedics, and today all MBFD firefighters are paramedics.

The uniqueness of the department and how it is interwoven with the city’s own history, Dennis argues, is why the City Council should resist contracting out its fire services to LA County.

“You know, I think the most important thing coming out of this book is the compassion this department has for the residents of this town,” she said. “More and more, as I researched throughout the department’s history, the more I realized how much they have done over the years. The department has been very low key; you didn’t really read much about it in the local papers…But their tradition is one of compassion for the community, and it’s just outstanding.”

“I have no idea which way this will go, but if I were on council, I would make a point of not doing it,” Dennis said. “Because we are just very lucky in this community to have this fire department. I understand the city is counting dollars and cents, but there is more to it than just that. The dedication to the community is just unbelievable. It’s important for the community to understand that. We’ve got a good thing going.”

“We love Jan Dennis and everything she has done for the city of Manhattan Beach,” Desmond said. “Her passion for preserving our small hometown community is integral to maintaining what makes Manhattan Beach so very special. We waited a long time for this book and we are excited that the history of our Manhattan Beach Fire Department has finally been thoughtfully captured by an amazing woman. Thank you, Jan Dennis.”

“She knows more about the history of this organization than a lot of people who’ve been there for years because she has really done her homework,” said Chief Daryn Drum. “This came out, to me, as all her books — as a labor of love. She’s certainly not doing it to get rich. Telling stories is who she is, and she’s a great storyteller.”

Dennis said this project was special for another reason, the fact that she had a collaborator — her grandson, Luke Jelmini, who assisted on several facets of the book and earned a byline. “He did a tremendous job,” she said.

When all the research was done, it marked the end of her days as a city historian. She’s packing up all her volumes of research — including several binders of local school history that could have made a book, if Dennis had the years and energy to commit to it — and California State University at Dominguez Hills is picking all the materials for inclusion in its research library.

“I must admit, I am very proud of that,” Dennis said. “I never thought in my wildest dreams my research would be part of a research library.”