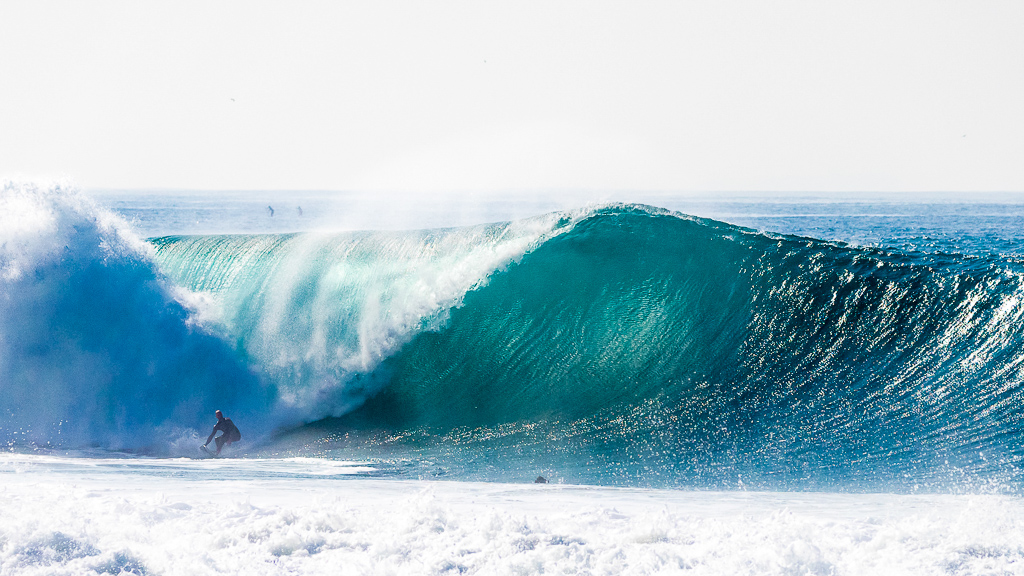 Jeff Jones has long been recognized as the best unrecognized surfer in the South Bay. He lost that title Friday evening when he won the South Bay Boardriders 2019 Big Wave Challenge Award.

The trophy, plus a $1,000 and a new surfboard is presented to the surfer who catches the biggest South Bay wave recorded on film between December and the end of March.

Jones’ wave came on “Big Wednesday,” Jan. 9, at the Redondo Beach Breakwall. The morning started big and kept getting bigger. The wave Jones dropped into going backside was in the 25- to 30-foot range. The photo that won him the award, by Rich Podgursky, shows Jones making a bottom turn while eyeing the pitching lip, poised to closeout in front of him.

“I had no place to go, so I straightened out,” Jones told the audience at the South Bay Boardriders annual awards night at the Hermosa Beach Community Center. 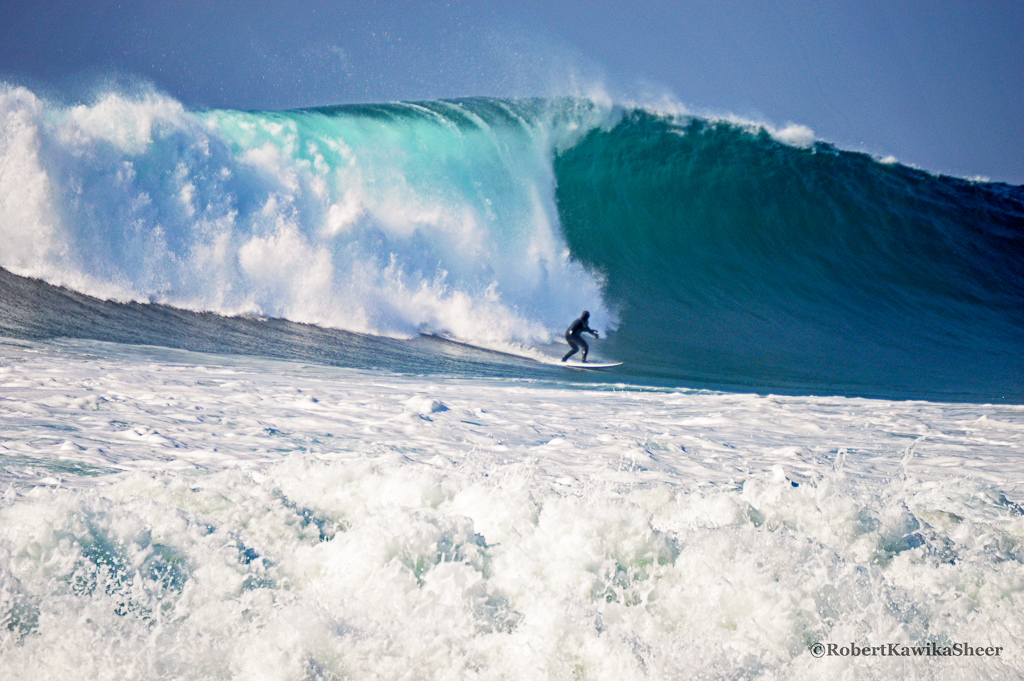 Chris Ridriquez was a Big Wave finalist with this wave. The following wave earned him the Wipeout of the Year Award. Photo Robert Kawika Sheer

The two other Big Wave Challenge nominees were Chris Rodriquez, photographed by Robert Kawika Sheer at the Breakwall and Nic Lamb (winner of the 2016 Titan of Mavericks contest), photographed by Fred Pompermayer at Hammerland. Their waves were also from Jan. 9.

Rodriquez earned Wipe out of the Year honors for a second wave he caught that day.

The wave might have won the Big Wave award had he not fallen when the lip slammed into him halfway down the face of the wave.

“When my head hit the water I heard a bonging sound and then my whole body went stiff. I told myself, ‘You need to wake up.’ So I shook myself and let the wave drag me ashore,” he said.

The wave earned him a wetsuit and a surfboard and $250 for photographer Shane Balzer. 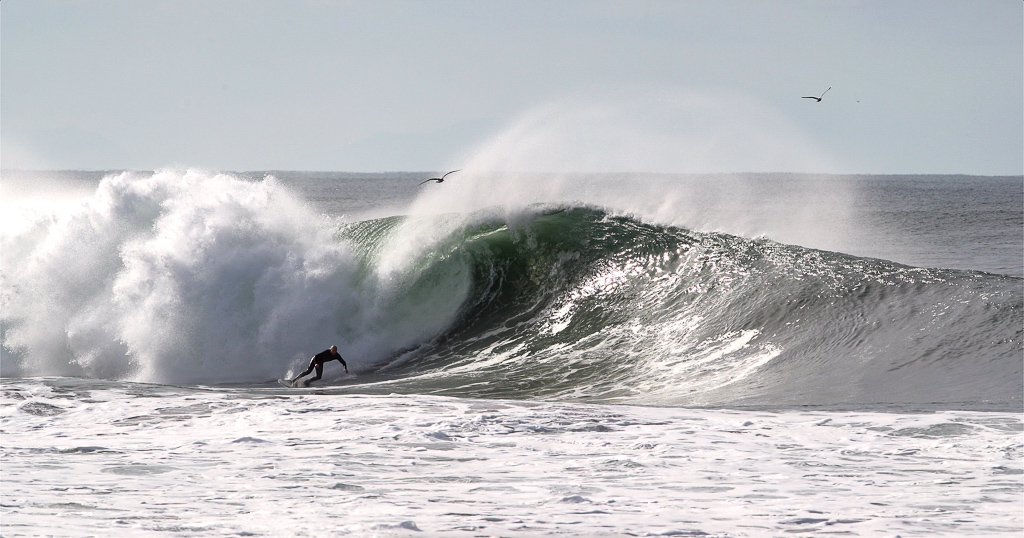 Matt Mohagen won the Ride of the Year award for pulling into ths barrel at Hammerland. Photo by Brad Jacobson.

But the award when to Matt Mohagen for a long barrel at Hammerland, videoed by Brad Jacobson (CivicCouch.com).

“Most surfers who pull into a big barrel, just stand there and hope. If Matt had done that, the wave would have closed out on him. So the whole time he was in the barrel he was pumping to get up enough speed to come out of it,” Jacobson said.

The Grom Hardest Charger Award, for a surfer under 18, went to Fry for a big wave at Breakwall. The two other nominees were Mira Costa’s Billy Atkinson and Palos Verdes High’s Briggs Peus.

The SBBC portion of the evening began with a presentation of the Howard Eddy award, presented annually for unselfish contribution to the South Bay surfing community.

Howard Eddy was a retired Hermosa resident who videotaped young surfers in the ’80s and ’90s so they could critique their sessions at a time when videotaping was too costly for young surfers to afford. 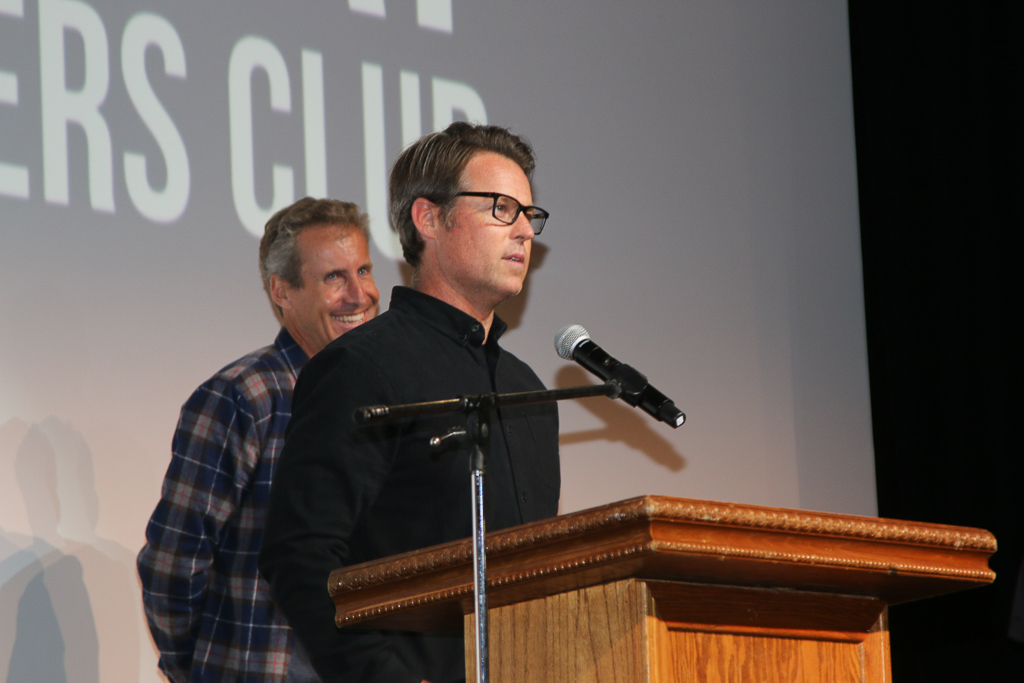 The award was presented to Spyder Surf’s Dickie O’Reilly, who characteristically donated the $1,000 prize to the South Bay Scholarship fund. In 2013, Dickie formed the South Bay Scholastic Surfing Association (SBSSA), as a successor to the long running high school surf league that was discontinued when its director John Joseph retired. Under O’Reilly’s leadership, SBSSA  has expanded to include 12 high schools and a six-month-long season.

The evening also served as an awards night for the SBSSA. The league championship trophy went Mira Costa High School, which finished the season undefeated.

Ethan Foley, of Santa Monica, and Erin Wolf of Peninsula received the Rookies of the Year awards. The John Joseph Dedication Awards went to Angela Strong of Palos Verdes and Zach Mitchell of Santa Monica. The Alex Gray Awesome Attitude Awards went to Deborah Mendiha, of Redondo and Erin Wolf of Peninsula. The Waterman’s Award was shared by Alex Fry and Parker Browning. Kyra Williams received the Waterwoman Award. 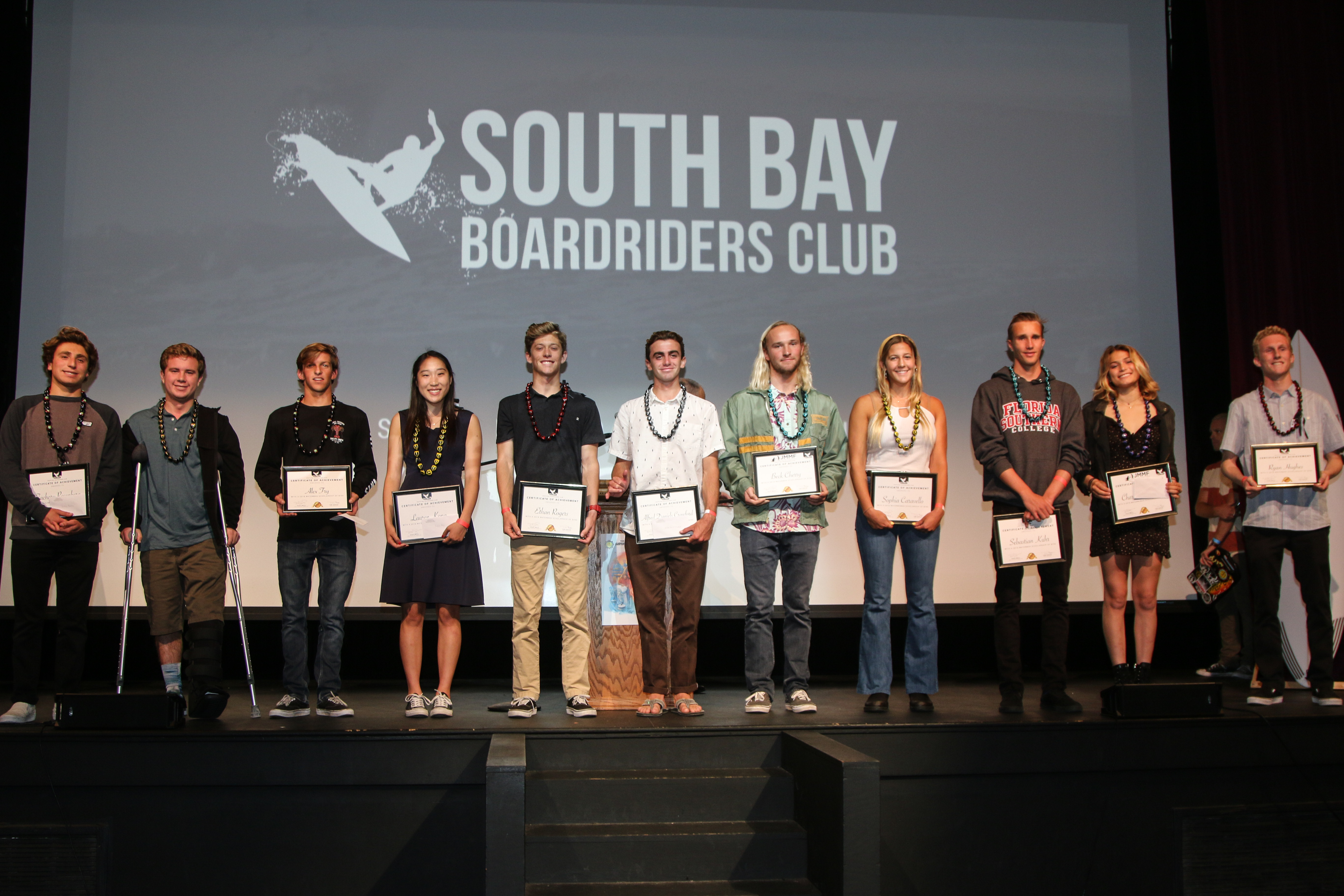 The awards evening ended with a screening of Jacobson’s “Chasing Lions,” a review of what many surfers described as the best South Bay winter surf in over a decade. ER