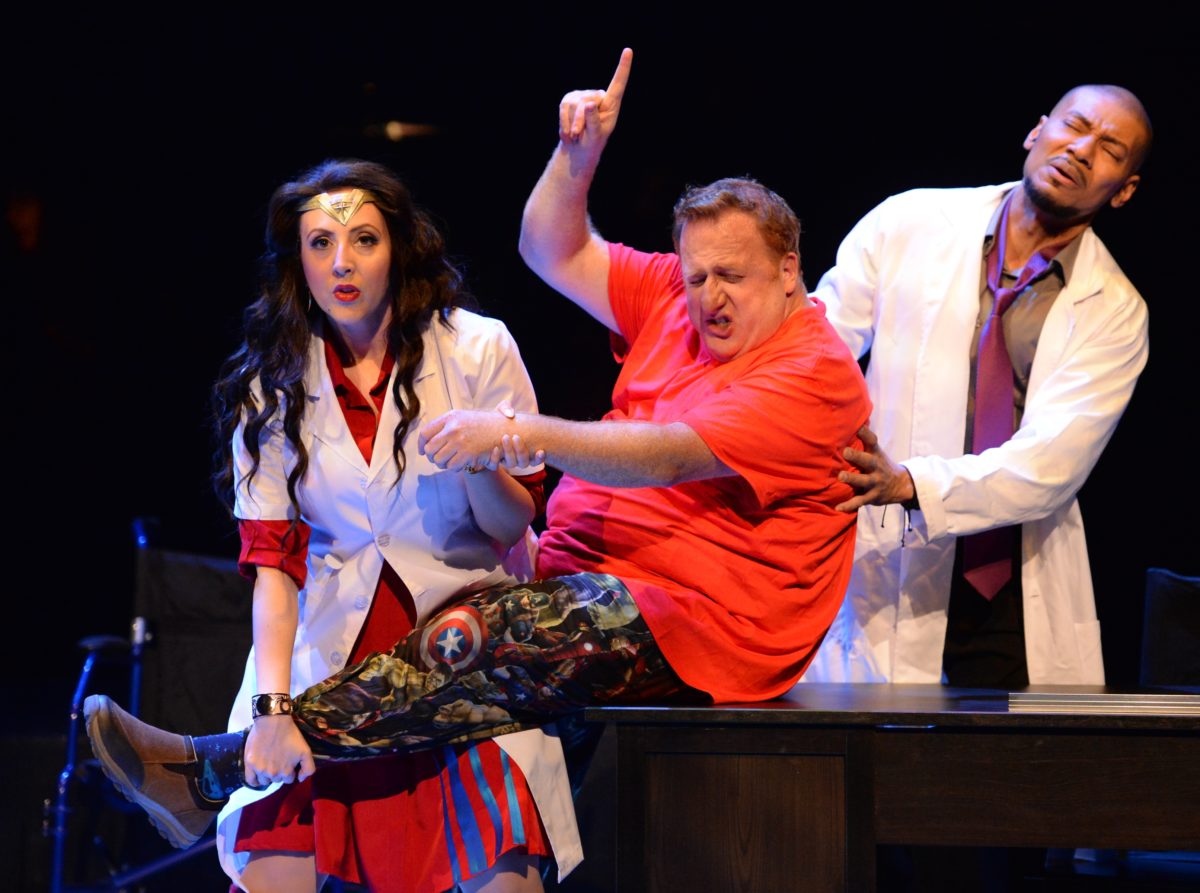 When Henry Purcell composed the music for “King Arthur” in 1691, set to a libretto by John Dryden, he probably wasn’t thinking about Wonder Woman or President Trump or “50 Shades of Gray.” Actually, with fighting between Arthur’s Britons and the Saxons as background, he’d focused more on the king’s attempt to rescue his fiancée Emmeline, who’d been abducted by the Saxon leader, Oswald of Kent.

The reason they’re called semi-operas is because, as was the fashion at the time in merry England, these musical presentations blended operatic moments with dance, spoken passages, and incidental music to accompany the special effects, such as they were 300 years ago. These works, it’s safe to say, wouldn’t carry much traction if performed that way today.

Still, they’re of historic interest, and with the exception of “The History of Dioclesian” Long Beach Opera has revived them all, in a manner of speaking.

Working with some of the principals from their 2017 production of “The Fairy Queen,” the company’s artistic director Andreas Mitisek and Culture Clash member Ric Salinas have reimagined “King Arthur” and then some. Here’s a synopsis, courtesy of their press release: “King Arthur returns as a superhero who fights a mysterious, strange and unnatural force that is attacking Earth and threatening life as we know it. Will he be able to save humanity? How will he be able to stand up against a race of alien shapeshifters who desire to conquer the galaxy?” 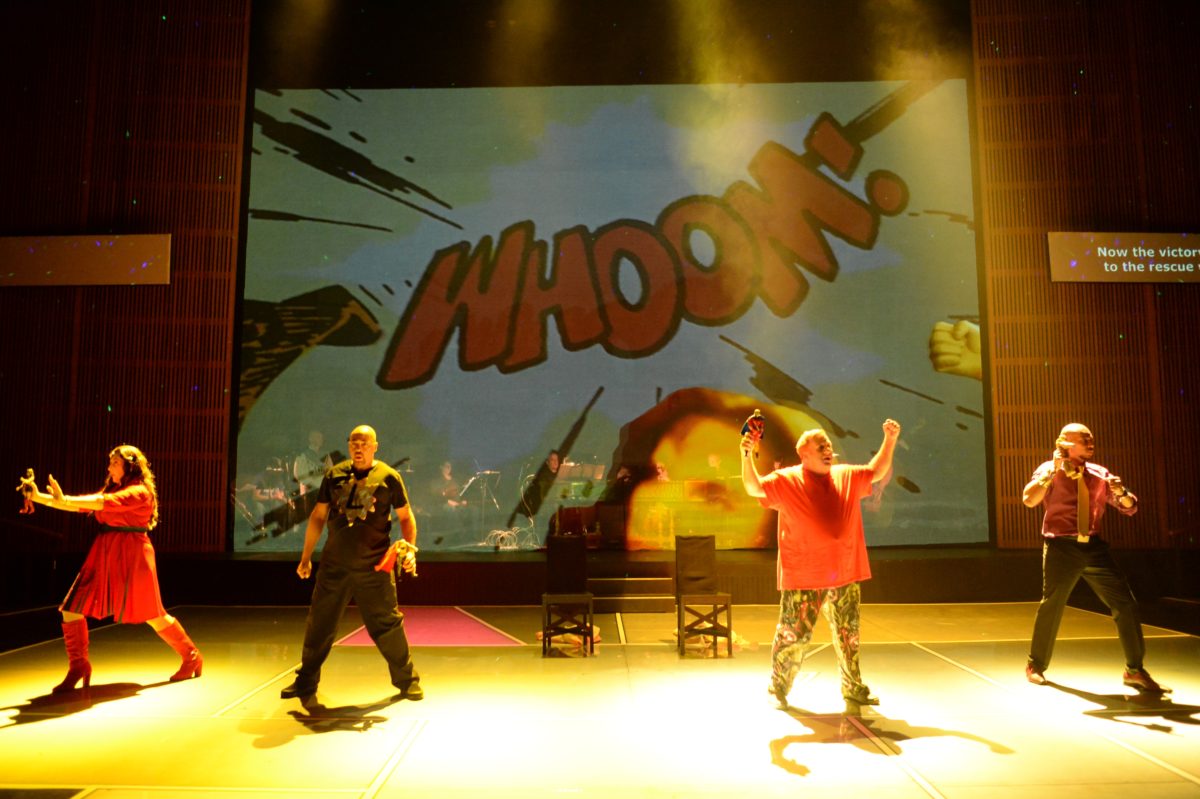 I imagine that sounds a bit like the Marx Brothers and Monty Python go to Mars, and before the performance is over you may be adding in Don Quixote, Baron Munchhausen, and “One Flew Over the Cuckoo’s Nest.”

There are just four singers in this opera, which opened Saturday at the Beverly O’Neill Theatre in Long Beach, and which concludes with shows on Saturday and Sunday. We have Arthur King (tenor Marc Molomot), Nurse Gwen E. Veer (soprano Jamie Chamberlin), Doc Oswald (baritone Cedric Berry), and Lance E. Lott (countertenor Darryl Taylor), who sound wonderful, like an exquisite chorus, when all singing together.

The work begins with a wearied Arthur coming home, undressing, picking up a superhero comic, and then going to bed. Gwen the nurse comes in to wake him, and we are soon given to understand that Arthur’s in a hospital or mental ward. Apparently he’s suffering from White Knight Syndrome, which means he’s out to save the world or, in this case, to rescue Gwen from Doc Oswald, who Arthur perceives as a villain, a shapeshifter.

Before the performance, Mitisek and Salinas emphasized that this “King Arthur” is not only an adaptation but sort of a dream within a dream, or a fever dream. That’s more accurate than they might want to admit, because the opera has not only been suffused with satiric political commentary, but lyrics have been rewritten and the order of the music rearranged to suit the retelling. Yes, there is some vague connection with the original as one can see with the play on names, but by taking their cue from superhero movies on the one hand and “The Invasion of the Body Snatchers” on the other, they’ve concocted something that has many ingredients but doesn’t come together. What is this mutant puppy supposed to be?

Not too surprisingly, there are some funny moments, especially with the four short video interludes, each character seen ruminating on his or her role in this opera or opera in general. Other video projection shows us superhero dolls floating across the screen along with some intermittent comic book script. 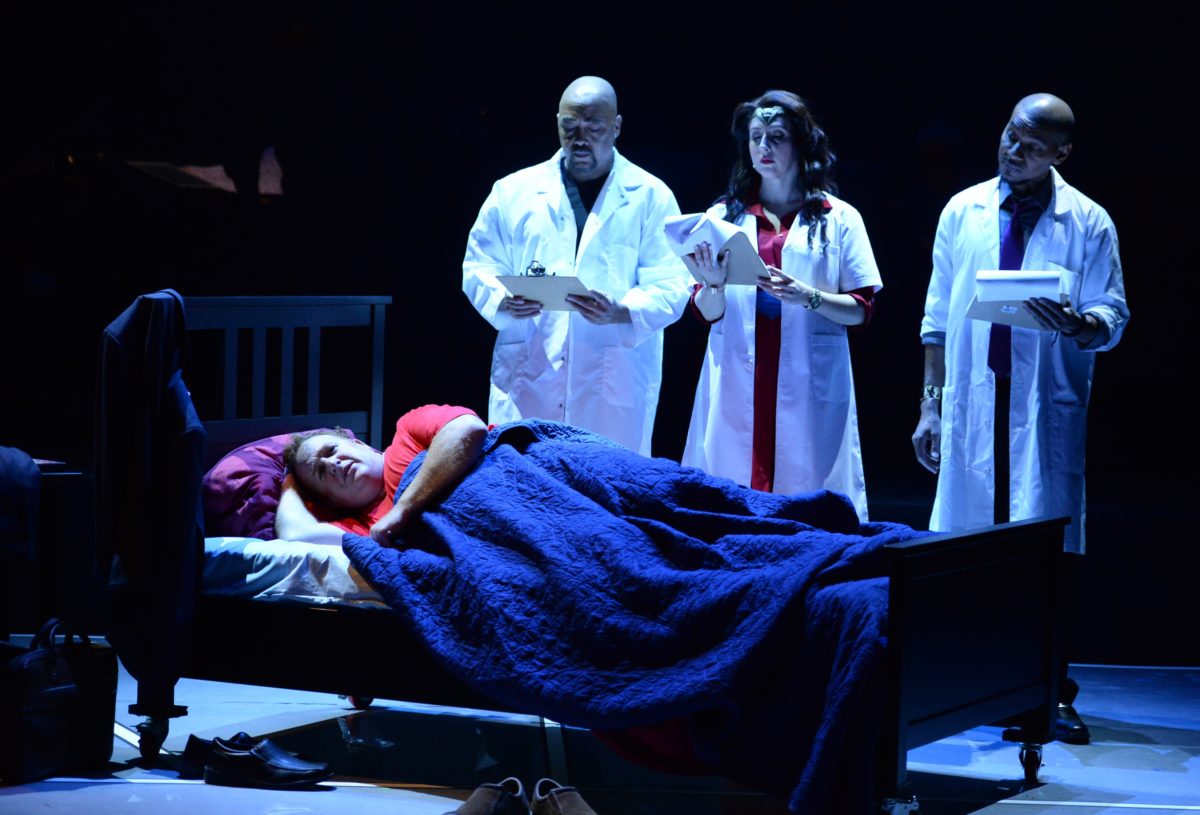 There is no actual set to speak of, just a few props (a bed, a table, chairs, a cart with miscellaneous items, etc), which of course lets us focus on the singer-performers. They’ve all got first-rate voices, but the bare-bones stage at times gives the impression that we’re seeing a rehearsal or a less-than-professional presentation.

Towards the end we understand that not only has Arthur checked himself into rehab, but that he might be Trump’s head of Homeland Security who has a revelation or two, and that we must become the heroes of our own lives. Altruism is to be elevated over mere wealth and power. One problem here is that the work reeks a bit of belated Trump bashing.

The music is performed by Musica Angelica Baroque Orchestra, conducted by Maestro Mitisek. Some of it ranks among Purcell’s best, and at moments it does seem transcendental.

In the end, though, this attempt at reviving or rejuvenating a long ago work just doesn’t work, and I say this after having seen the company’s fine productions of “In the Penal Colony” (Philip Glass) and “The Central Park Five” (Anthony Davis). But that’s to be expected of a bold, daring, and experimental opera company, and I’m looking forward to their next productions: “The Lighthouse,” by Peter Maxwell Davies, takes place at the Long Beach Aquarium, and “Billy the Kid,” by Gavin Bryars, is set in a cemetery. The current season will end in June with a reprise of “Frida,” by Robert X. Rodriguez, again to be staged at the Museum of Latin American Art.

King Arthur, by Henry Purcell, adapted by Andreas Mitisek and Culture Clash with Musica Angelica Orchestra, is being performed on Saturday at 7:30 p.m. and Sunday at 2:30 p.m. in the Beverly O’Neill Theater, 300 E. Ocean Blvd, Long Beach. Tickets, $150 to $49. Running time is about 90 minutes, with no intermission. Pre-opera talk one hour prior to the performance. (562) 470-7464 or go to LongBeachOpera.org. ER