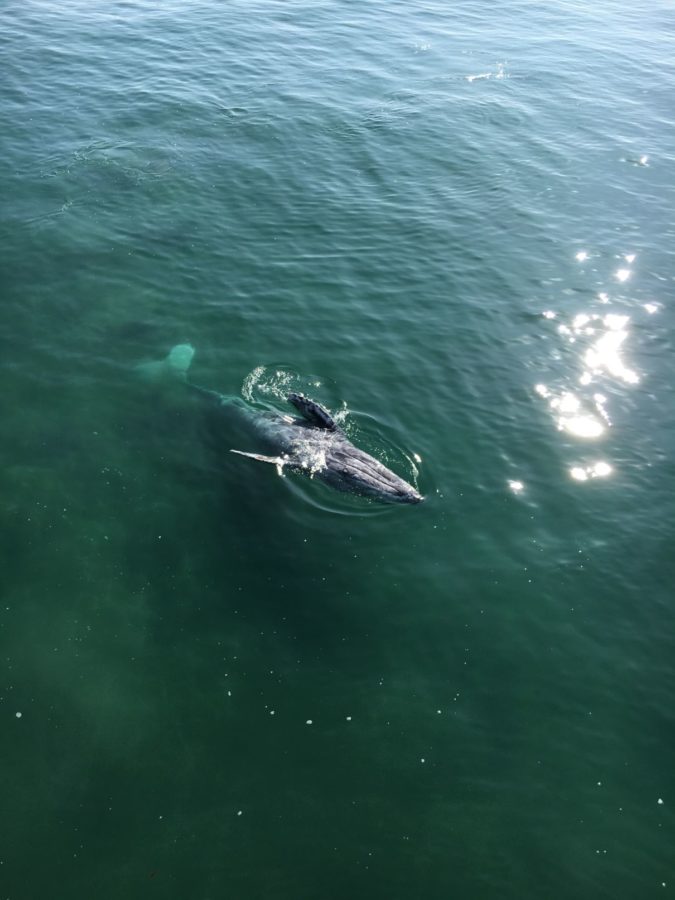 Mike Balzer was standing on the Manhattan Beach Pier last Thursday morning looking out at the ocean and silently bemoaning the lack of waves when he noticed something odd. A few hundred yards south, just beyond a standup paddler at the Surfline, the water was roiling. Something very large was surfacing.

“There was this huge boil in the water not far from where the paddler was waiting for a wave,” Balzer said. “All of a sudden this big thing comes out, and I was like, ‘What was that?’”

The paddler didn’t wait to find out. He paddled furiously towards the shore. Balzer, and probably the paddler, was thinking shark.

Then Balzer saw the shape and length of the animal, which was 25 to 30 feet long and had gray mottled skin. When it breached and blew, Balzer knew.

Nobody else saw it. The paddler was too busy getting to shore, and there were only a few people scattered nearby on the pier.

“It was so close to the shore, I was thinking it’s got to be touching bottom,” Balzer said. “I’m watching and it starts coming towards the pier and I’m like, this could be really cool.”

Balzer actually walked quickly east, towards the land-side of the pier, because the whale was closer to the shore than he was. He could hear it breathing as it approached. He saw a father with his young son and beckoned. “Hey, you want to see something really cool?” he said. “There’s a whale coming!” The father didn’t believe him, but then he saw a spout and ran to the rail with his boy. Then, out of the corner of his eye, Balzer saw a class of young students coming out of the Roundhouse Aquarium.

“You want to see a baby whale, look right here!” he yelled.

Suddenly the pier was alive with the shrieks of little kids, who turned out to be kindergarteners from La Tijera Elementary School in Los Angeles. By this time, the whale was right below the pier. It looked for a moment, Balzer said, like the whale was going to “shoot the pier” and swim right through the pilings. Balzer, who is an action sports photographer, was wishing he had his camera.

“I only had my iPhone with me and shot a few photos,” he said. “The whale was so close if you’d dropped something, you’d have dropped it right on the whale. The water was super clear and glassy and all of a sudden it goes on its back and you could see its belly, and then it goes under and now it starts swimming out towards the Roundhouse, and it goes right along the pier and hugs the end of the pier. By then it was picking up speed, and it starts swimming north.”

Eric Martin, a marine biologist and co-director of the Roundhouse Aquarium, also caught the tail end of the whale’s show at the pier. Martin said only rarely do whales appear so close to shore, and almost always when they do, it’s a juvenile. Martin said the gray whale, though it headed north, was almost certainly on its migration to Baja Mexico.

“Yes, it’s supposed to be going south,” Martin said. “But juveniles, they are kind of mixed up at some point.”

Gray whales have the longest migration of any mammal. They travel 10,000 to 12,000 miles roundtrip each year, migrating north each spring to feed in the nutrient-rich waters of the Arctic, then south each fall to mate and give birth in the safety of the lagoons of the Baja Peninsula. They typically live 50 to 70 years and grow to about 40 ft. and 60,000 pounds.

“Basically, I’m guessing it was looking for food,” he said. “We do know they are trying to find food in different locations now. I’ve seen drone footage of whales feeding in LA Harbor.”

Gray whales filter food through coarse baleen plates and are unique in that they prefer prey that lives near or on the ocean floor. They suck sediment and prey from the seafloor by rolling on their sides, and use their tongues —  which in adults weigh more than a ton — to dislodge amphipods and other tiny organisms from their baleen plates and eat.

Whatever the whale was doing at the Manhattan Beach Pier, its visit is something neither Balzer nor anyone else who saw it will soon forget.

“I mean, that was a trip. I was born and raised here my whole life and I’ve been surfing here forever, and I’ve never seen anything like this,” Balzer said. “I’ve never seen a whale that close. You are just like, ‘It’s right here!’”