Kate & Oli: Cards with a kick 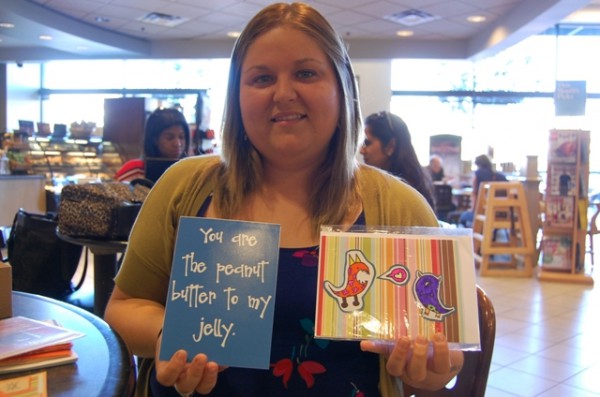 About a year ago, Katie Hanson was looking through a book about sea life with a little boy she was babysitting when they came across a particular blue starfish called Linckia.

“And the kid just kept saying, ‘Aw, the Linckia are in love,’” Hanson, 27, recalled with a smile.

Any other babysitter would have tousled the kid’s hair and moved on – but not Hanson. Inspired by the boy’s innocent observation, she went home later that night and created a new line of cards for her online Etsy store, Kate & Oli, which sells handmade cards and digital prints or posters designed by the Redondo Beach resident.

“The kids I babysit say little things that stick in your head, and you go home and say, ‘Oh, I should totally draw that!’” Hanson said.

Her kid-inspired cards have garnered fans in countries as far flung as Lichtenstein, Hanson said.

After graduating from the University of Phoenix with a business management degree, she took on the daily grind working for her father, a customs broker in Redondo Beach. The job paid the bills, but she was missing a creative outlet.

“So I started playing with paper. I’ve always liked paper,” she said. “Then I realized that you can stamp it, you can emboss it, you can cut it into cool shapes. There was a market.”

While maintaining her babysitting gigs and full-time job, Hanson began jotting down ideas and setting aside time after work to cut, craft and create.

Since opening its virtual doors on Etsy in March of 2009, Kate & Oli (Oli is the name of her cat) has evolved from selling a modest collection of Hanson’s handcrafted cards to housing lines of seasonal cards as well as original digital art, for which she often incorporates pieces of poetry and quotes.

Her best-selling products to date are the digital cards and posters from her “Happy is the New Black” line, a quirky theme that’s representative of the simple and sassy approach she takes in her work.

“It’s a card for any occasion,” Hanson said. “I’ve given it to friends when they had babies and weddings. Happy goes with everything.”

Kate & Oli cards, which range from $2.50 to $5 apiece, are available at www.etsy.com/shop/ichbinseins.