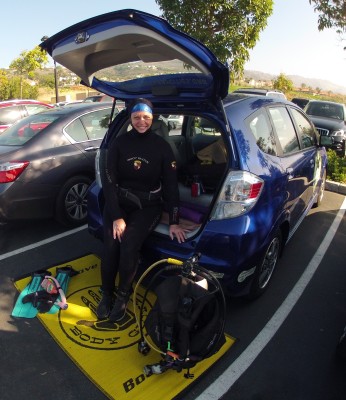 Linda Sue Dingel is a resident of Redondo Beach, a Dive Professional since 1998, with seven of those years teaching diving in local South Bay waters.

So you want to go diving in January ? What is wrong with you ! Are thoughts I was thinking when my dive buddy asked me to join him this past winter in local Southern California.  Remember those 80⁰  winter days? It was during that time he asked me to dive with him. I looked at him with stark amazement.

“Do you know the last time I went diving in January ?” I replied.

“Let me guess … you were getting Paid ?” my Dive buddy said.

With my experience and lack of a drysuit, I know better than to dive locally in January. My dive buddy is a novice with approximately 50 dives. He’s  filled with so much diving passion, he just might be naive to the notion that this is normally not a good idea and one of our better plans. However, the sea was flat, calm, the sun was out, and the air was still and hot.  I’d overheard other divers getting out of the water explaining the water temperature was only 57⁰.  I know from all my experience, I could handle 57⁰ in my wetsuit no problem. So,I figured what have I got to lose ? 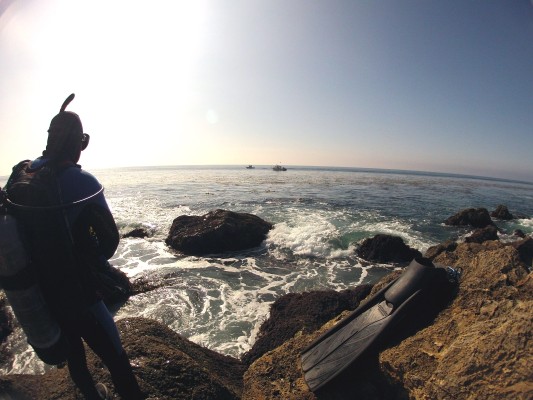 Checking into the Program

The only time I’d ever dived here before, I was with master of all divers and the next best thing to having Jacques Cousteau as your dive partner, Co-Founder of Dive N’ Surf Inc. and Body Glove International, and inventor of the wetsuit, Bob Meistrell. It was off his boat The Disappearance otherwise known as “The Body Glove Boat.”  If I was going to dive here again, and this time from shore, I knew following Reverand Al would be my best bet.

Al greeted us and we walked down the path from the parking lot that replaced the last hold out of Old Marineland. Past the full service upscale restaurant, restroom facilities including outdoor showers (built just for divers), and snackbar facilities, he led us down the groomed walking trails.  Al showed us the rocky entry point and where to climb over all the rocks (with all your gear on) and how to time your entry just right in between the surge so you don’t get pushed back onshore while trying to swim out to the dive site. 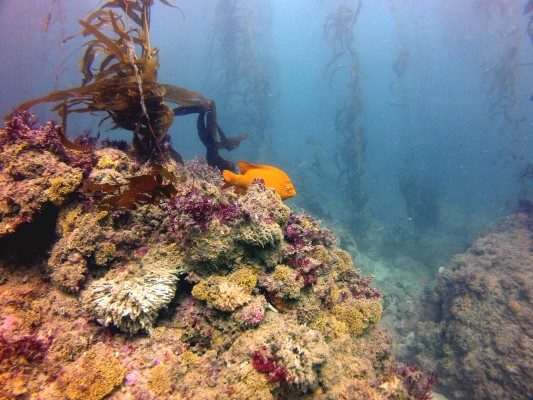 After being shown the ropes, we headed back to the car to suit up in full scuba gear.  Al waited for us at the drop point in deeper water.  There was 6 of us in the group.  Al and buddy Rob Walls led the team, Greg Smith (aka “Stingray”) and I followed, and 2 more experienced dive veterans, Tony Toniolo and Terry Anderson, swam alongside us.

Upon descent, it was  evident to me that although it may be a stellar day above the surface, below was not very clear. Actually, it wasn’t  clear at all.  Greg and I have been diving together as a team for about 2 1/2 years now, and I’ve been a part of nearly all of his 50 dives.  He was smart enough to bring a dive light with him (and so were the rest of the divers).  I was the only diver without a light. 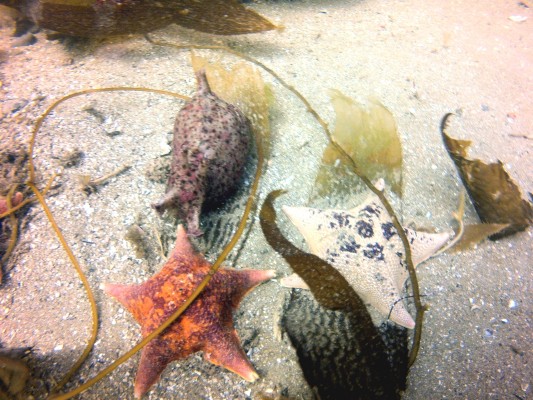 Greg and I swam side by side, close enough that we were touching. I tried looking around at things of interest, but soon realized that not losing my dive teammates is more important.  Normally using a light at 50 feet  is a luxury used to peek into crevasses and under overhangs to spot interesting critters. Today, it was for survival.

The dive  became a game of “Do Not Lose Those Fin Tips In Front of You.”  I stuck tight to Stingray and focused on Al’s blue fins, close enough to be almost kicked in the face.  Our situation epitomized the saying, “It was like swimming in pea green soup.”  I can tell the way Al and Rob were darting about and swimming through the water that even these two seasoned divers were looking for reference points to keep us on track to exit the water safely.  After about 45 minutes of constantly checking … air, buddy, and fin tips in front of me, we heard the rumble of the rocks tumbling in the waves.  A  good sign that meant we have made it close enough to the beach. 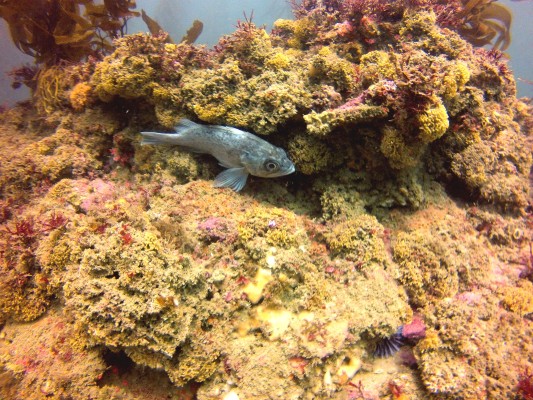 After a rinse in Terranea’s  Diving shower facilities,  we gathered in the parking lot for a celebration picnic of snacks and libations, a tradition that follows every dive no matter what.  Good or bad … We Dived !  (and even better yet, we lived to share the tales of our adventures!) After our dive, Al told us that was the absolute worst visibility conditions he’d ever seen.  EVER. And I couldn’t be happier!

While my relatives back east were enduring record breaking snowfalls and windchills, I was here in Southern California scuba diving.  I wasn’t cold, I didn’t lose my dive buddy, or any of my equipment or teammates, it was a beautiful warm winter day, and after all … I just dived in January !  Right after that dive I made a commitment to myself.  I told my dive buddy,  I am going to dive at least once a month locally for the whole year. 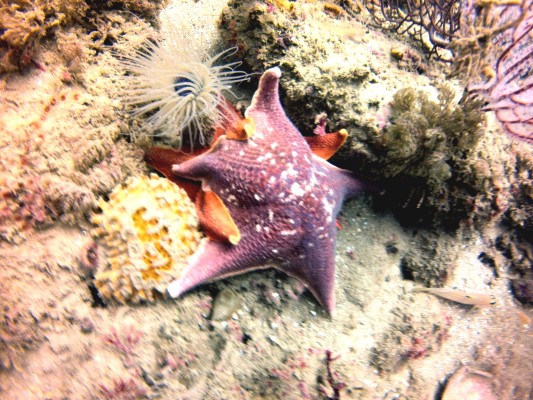 In February, I went back to Old Marineland. This time veteran Michael Boysen lead me on one of the most incredible beach dives I have ever been on and realized why Reverand Al holds service here every week.  It was Heaven.  With incredible visibility of 25+ feet (that’s super for shore diving around here), I saw so much local marine life that I thought I was offshore on one of the pristine Northern Channel Islands. It was world-class California diving at its best. Who knew ?

In March I dived at Veterans Park just south of the Redondo Pier.  And on that dive, everything we saw came in sets of two at a time.  Two sheep crabs (caught in the act connected and trying to make 3), two baby leopard sharks, two sea hares, two octopus, etc.  It was “Double the Fun.” 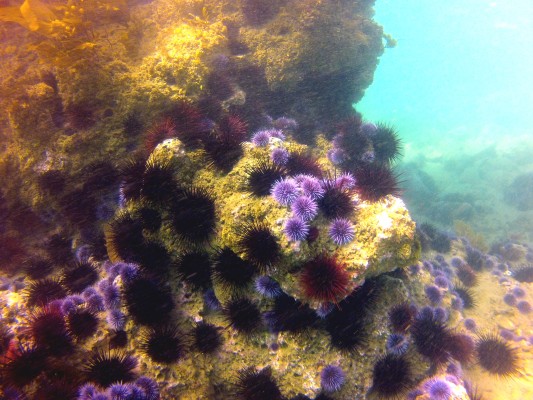 2 weeks ago I got my April dive in right before the winds kicked up. I had a Blast! Literally. Greg had just picked up an underwater air cannon that shoots bubbles laterally.  This is the coolest underwater toy, ever!  He took the camera, and I got the gun. I was having so much fun I had to consciously calm myself down as my mouth and mask were filling with water from laughing so hard.  This thing shoots a blast of air in a straight line for approximately 30 feet before it dissipates.  You can shoot other (unsuspecting) divers from behind, blast sand making it look like a bomb just went off, or chase crabs making them claw at air with their pinchers.

This is definitely a 12-step program because I am going to need help getting through this addictive year. The only cure is to dive at least one time per month in local California waters.  Now, who wants to dive with me this month? To be continued…DZ