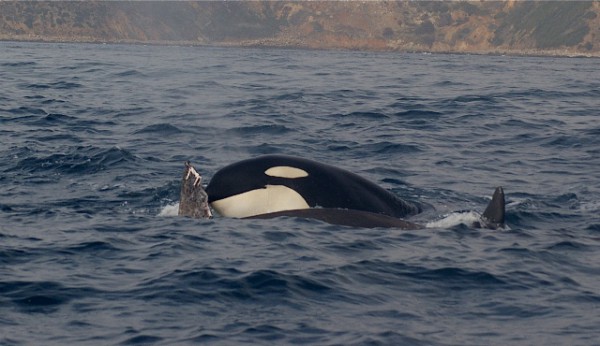 This is the first time in 28 years that a killer whale has been seen killing and eating a gray whale calf in the Santa Monica Bay. For researchers, it was a pivotal yet bittersweet moment.

“I’m a little conflicted,” said Alisa Schulman-Janiger, the director of the Gray Whale Census and Behavior Project. “I don’t like the idea of killer whales attacking grays, and I want to see the killer whales and the gray whale calves, it was just horrible to watch the mother struggle so valiantly to save her calf. On the other hand we had observers who can record and study the event.

The killer whale group, known as the CA 51s, a seven orca group of two mothers and their offspring ranging in ages from one to 19, have been seen seven times in the area since September. They are known as “the friendly seven,” because they typically interact with boaters. They have frequently been seen eating sea lions, harbor seals and also dolphins. Since the group has been in the Santa Monica Bay, they have been known to bring along other groups of orcas. Schulman-Janiger calls them the area’s “tour guides.”

The group they brought with them on Wednesday is known as the CA 27s, a traveling group that has been seen as far north as Alaska and includes an adult often seen near the Channel Islands and her four young whales ranging from juvenile to adult ages.

According to Schulman-Janiger, because of earlier Arctic ice melting, gray whales have had banner feeding years. Because of more access to food, this year has been an excellent year for calves. The interpretive center already has counted 241 calves; the past record was 222 in 1997. The last ten years has seen a range of 40 to 175 calves.

Researchers have also been noticing a migration trend. As the mother and calves move up from their birthing waters in Baja California, instead of traversing the open ocean, they have been traveling closer to shore. Because of their proximity to shore and the sighting availability, this may be another reason there have been so many calves spotted traveling north.

Researchers hypothesize that the killer whales have noticed the trend too, and as was seen on Wednesday, have been stalking the waters, waiting for their chance to feed.

“They may have learned that the they might catch a gray whale in the Santa Barbara channel, especially since so many are funneling close to the shore,” said Schulman-Janiger. “They have learned that they can go in this area and wait and ambush. It could potentially become a regular event here. It kind of makes sense.” 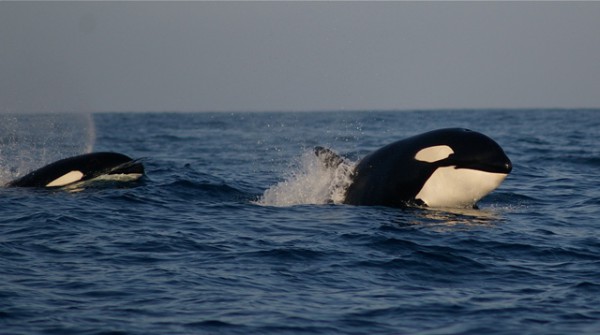 Photos of the aftermath by Eric and Cody Martin.

When Schulman-Janiger and Eric Martin, co-director of Manhattan Beach’s Roundhouse Aquarium, first were notified of the killer whales presence from the Gray Whale Census Counters at the ASC-LA Gray Whale Census and Behavior Project at the Interpretive Center around 1:30 p.m., the whales were moving up and down the coast, apparently hunting. After the crew hit the water in Marina Del Rey in Martin’s boat, they heard that the group had emerged from the heavy fog that had blanketed the bay about a mile and a half from the center. Onlookers spotted a large blow, indicating that another type of whale was in their group. Whale watchers then noticed a gray whale rolling her pectoral fin at the killer whales, and finally, the doomed calf’s head.

“The mom put her flukes in the air and was waving them around,” said Schulman-Janiger. “At one point they [census counters] saw the calf way out of the water like it was being thrown in the air. The mom tried to make it to the kelp beds where the killer whales couldn’t go, but the killer whales were all around them.”

By the time Schulman-Janiger and Martin got to the scene in their boat at 4:20 p.m., all they could see was the killer whales splashing. The mother was nowhere to be seen.

“There was a lot of splashing and ramming,” said Schulman-Janiger. “They were slamming the mom and calf all over the place, then they disappeared and there was an area of turbulence on the surface for six minutes. Something was going on under the water. After that the mother left, and the mother never ever leaves unless the calf is dead. She will put her life on the line to save the calf, but once the calf is dead she gets out of there.”

The census counters report seeing the mother travel “as fast as they have seen a gray whale travel.” She raced to shore, chased by the killer whales until they couldn’t follow her anymore. The counters report noticing that she was “beat up pretty bad.”

Photos of the aftermath by Eric and Cody Martin.

“I’ve seen things in our waters, but nothing like this,” said Martin. “… by the time we got there we just saw the carcass on the surface. We missed the actual beating up and killing by like five minutes…. I think it was pretty fascinating how these animals stay in a very tight group and push the body around.”

After the gray whale mother had left, the killer whales grabbed the calf’s pectoral flippers and dragged the body off shore. The two one-year-old juvenile whales, who were too young last season to join in on the kills, were apparently celebrating by doing head stands, breaching and sticking their tails out of the water and waving to the following boat.

“I’ve never seen anything like that,” said Schulman-Janiger. “It was possibly their first gray whale kill of the season and they were excited and intent on the task. It was interesting to see, although it was horrible to happen in front of the census counters. It was a life and death struggle, and killer whales need to feed their families… It’s hard, I’m rooting for the gray whale calf, but I know the killer whales have to eat.”

Although the episode ended in the death of a calf, Schulman-Janiger is excited about the research possibilities of such incidents.

“If the CA51s start bringing more friends down here, it’s a great thing not just for me as a researcher but for whale watching too,” said Schulman-Janiger. “It’s amazing to see them do their thing, especially with the CA51s who spend a fair amount of time coming up to boats.”

For Martin, the skipper of the boat and one of the photographers able to capture the outcome, it was a once in a lifetime experience.

“We got to see and document the aftermath and how they work,” said Martin. “It was one of the top two sightings of all time for me… I’ve seen them playing but this showed their brute power and force and how they think and communicate underwater. Before I’ve only seen splashing like that in movies.”

He realized the significance of the sighting, but also was able to understand the mother’s loss.

“Seeing them kill sea lions is one thing, but seeing a gray whale fight for her calf and knowing that scientists are starting to realize that these animals really have compassion and can really feel pain…in my mind that mom is going to grieve, no doubt about that,” said Martin. “These are the most intelligent animals on earth, they have to eat, they have to feed. It wasn’t caused by man; it was just nature at its best.”