La Venta comes back to life 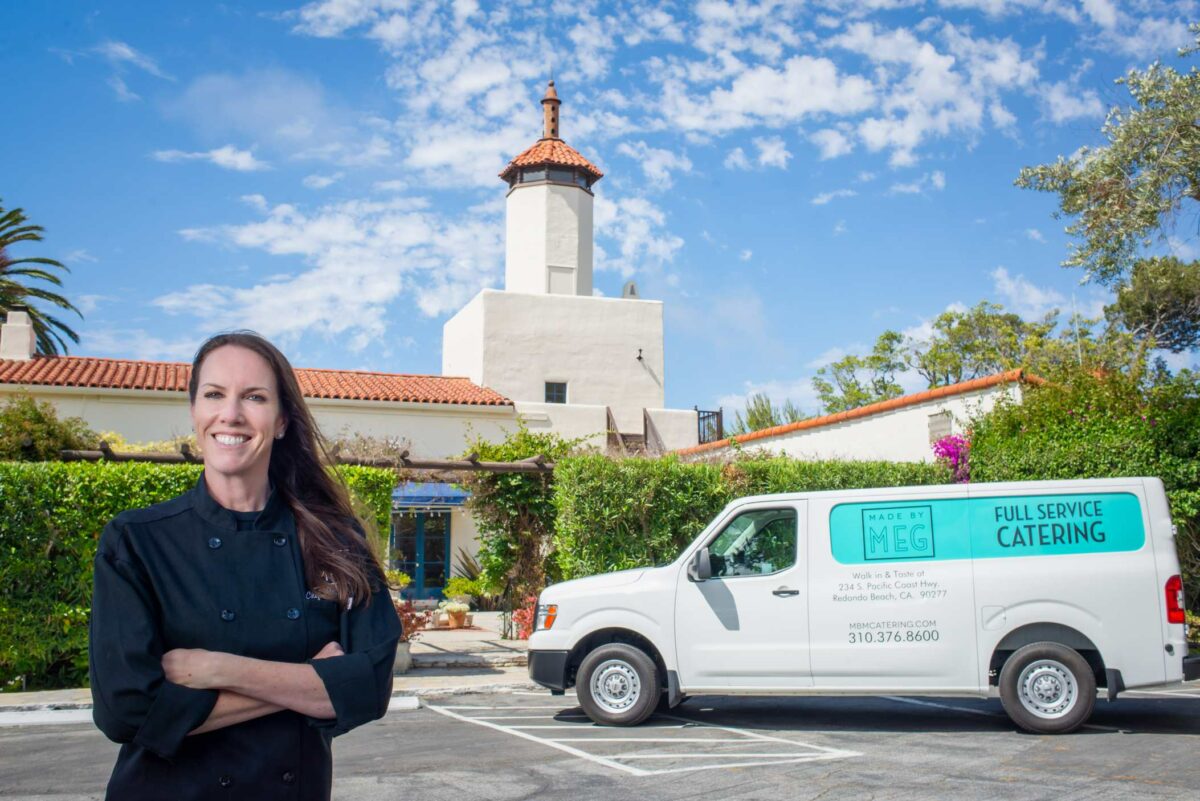 Megan Walker, of Made by Meg, has been chosen to be the exclusive caterer at La Venta. Photo by John Russell Photography

Megan Walker, of Made by Meg, has been chosen to be the exclusive caterer at La Venta. Photo by John Russell Photography

The building on twisting Via del Monte is a landmark, though drivers on Palos Verdes Drive West who glimpse the white cupola through the trees might assume it’s a church. It isn’t, though La Venta has been several other things over the last 98 years, including a real estate office, bed and breakfast, private home, and an observation post for coastal artillery during World War II. For the last several decades it has been a wedding and banquet facility where generations have tied the knot or celebrated other occasions with a spectacular view of Santa Monica Bay and Los Angeles in the distance.

Like everything else those events came to a halt in 2020, which resulted in the bankruptcy of the New York Food Company, which had managed the space for over 20 years. Other facility operators and caterers leaped to put in bids, including prestigious Beverly Hills and Hollywood firms. But the contract went to a local operation, instead. This is Made by Meg, operated by Manhattan Beach native Megan Walker, who now lives in Rancho Palos Verdes. Meg says she heard about the opportunity before most other people, and through a variety of sources.

“The New York food company filed for bankruptcy in July of 2020, and even the top employees had no idea this was going to happen. A lot of clients who had things scheduled at La Venta called me, and some of NYFC’s employees reached out and said, ‘This is now available. Can you step in and see if you can take over?’ A lot of them were looking for their next job. I was in touch with the owner as fast as I could find their email address, and we set up a call. We finally finalized the lease in June 2021. We developed a friendship over the year, and the owners are really nice people.” 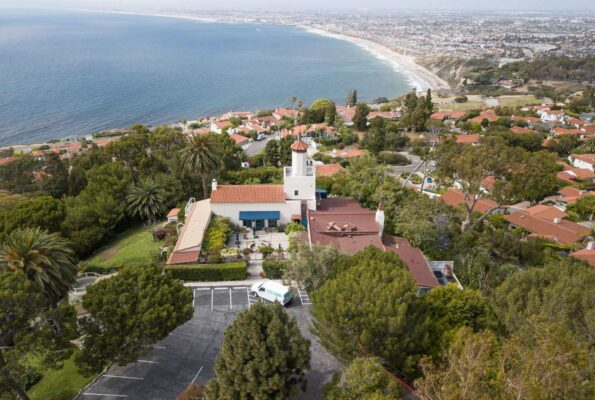 An aerial view of the La Venta.

Those owners had a commitment to undo some modernizations that had been added by the previous facility managers, and to generally freshen up the space. As Meg says diplomatically, “I think over time if you’ve spent 30 years living in the same place, you forget to give it a careful eye. I even asked one of the older employees, ‘You were selling out with this carpet?’ And he said, ‘Oh yeah, management thought that all the customers could see was ocean view.’ If you were continuing to make money, why would you make those upgrades, because it’s costly and you’d have to shut down to do it. My transition is unique, in the sense that everyone else was under the pressure of executing contracts. A lot of people wouldn’t be updating it the way I’m updating it, because they’ve got the next wedding on the calendar. I’m gonna be working with this for a long time. So I want to make it right.”

Right, to Meg and the owners, means a return to the original look of the La Venta, which had been built as the sales office for the entire Palos Verdes Estates tract. (That’s reflected in the name. La Venta is Spanish for “The Sale.”) It was the first of many buildings in the area designed in a then faddish architectural mode.

The Spanish Revival exterior is almost exactly the same as when it was built, except for the added lanai. That was originally an outdoor patio that was enclosed years ago for a dining room, I believe the building deserves to be in its glory like that. That’s what people love about La Venta – the shape of the building, the cupola, and the classic look. So all I did was on the inside, and some of it was more work than expected. I think that probably 20 layers of paint came off one of the doors.” 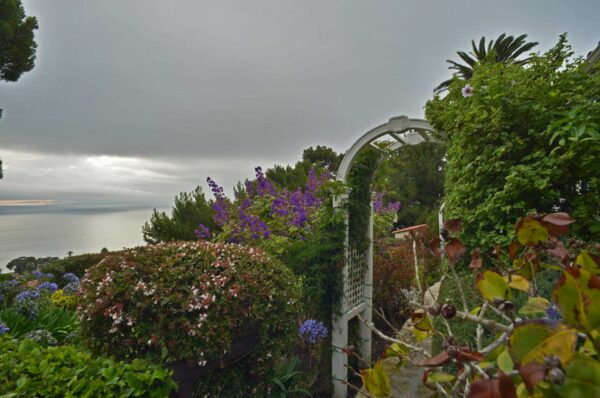 The paint in the ballroom was shiny, almost yellow orange, and it had to be hand scaled off. Now it’s a beautiful matte white, the way it was when the place was built. These are upgrades that don’t take long but feel significant when you’re trying to sell an upscale place. Taken together, they make it so the client wants to spend more time on the property. I’m making the bridal suite much more interesting because the more livable you make it the longer people want to stay. These things matter to the kind of clients that I typically work with.”

Meg knows about the usual clientele here, even though she never attended any events under the previous management, because her own schedule was so busy. She is in touch with the neighborhood because she shares it.

“I have timed it and I live five minutes away, maybe six, depending on stop signs,” she said with a laugh. “We dropped off some Made by Meg cookies to the people who live nearby, along with a letter to share what our plans are, and we’re very aware that we’re a part of the neighborhood. I know that to many people here, La Venta didn’t feel like something that was a part of the city. Locals didn’t feel welcome, and that’s because they were busy with private events. And I respect that, but I love the idea of inviting in neighbors who may not have a wedding coming up, they just want to come to something historic that’s a big part of their town. I’m hoping to have occasional events where we can offer something exciting where they can come and join us.”

Those events won’t be complete without a varied and interesting menu, and Meg notes that this is more challenging for an audience that is in a storied location in the South Bay.

“We’re entertaining some of the most entertained people in the world. They’ve been to every party in every city for every reason, and they want to see what’s new. The two coasts are putting forth our next dose of culture, and we’re a part of that equation. Like a fine restaurant chef, even a Michelin star chef, we are required to know what’s next and be able to tell people what’s interesting. We currently have 1,500 menu items, and I have to constantly pare things off the menu.

The difference between a restaurant and a catering business, is that a restaurant has to put out their best dish perhaps 25 times a night, but not all at the same time. I’ve got to put out my best dish to anything from 250 to 1,000 people at the exact same time, the exact same temperature and looking exactly the same. That’s why I invest in the best food stall accessories. So catering is by nature like running the hurdles versus running a marathon. You run up to make that jump and leap, and then you’ve got your next hurdle.”

Made by Meg had been catering about 600 events a year before the pandemic, while also operating a small sandwich shop in Redondo that is attached to their main kitchen. Many of those events were staged in private homes and rented halls that posed unexpected challenges.

“Do you want to talk about horror stories? That’s what catering is like, it’s about grace under fire. The client doesn’t want to hear ‘This isn’t going to work’, and our job is to find the solution. My team is trained to be like, Okay, I’m getting down and looking at the pilot light, I’ve fixed more ovens than I can count. You know, that’s part of my job. I’m thrilled, absolutely thrilled to have an in-house location where it’s going to be the same service every time.”

Meg experienced a sense of wonder when she visited the kitchens at La Venta, which have upgraded fixtures from the ones installed in 1923. but bear the signs of a century of use.

“I’ve visited castles in Europe where the steps are worn from centuries of traffic. There are literally paths like that in the kitchen floor at La Venta, well-worn service pads around the stoves. It’s a visual reminder that we are really continuing the legacy. What’s there has been working for years, and there’s no reason to change it. Even so, a lot of items will still be started at the kitchen in Redondo and finished on site. The Made by Meg headquarters in Redondo is about 4,000 square feet, and has 11 fridges. La Venta has two. The Made by Meg catering style is to get everything as ready as possible and send it out to be finished on site, especially the things that are a la minute. So all of our food will be prepared by our culinary team here, in Redondo, and then sent to La Venta for finishing.”

Meg has no concerns about finding clients for La Venta, because requests started pouring in as soon as it became known she was operating the space.

“As soon as I signed the lease, my phone started blowing up. I told everybody, ‘You know, we need to get some things in line here, and I’ll take your information.’ There’s a lot of pent up demand. People are really interested in the neighborhood gem, and it’s an important part of our history in Southern California. We’re going to host our first events in October.”

Parties from 35 to 200 will soon be able to stroll the replanted lawns and garden, as well as enjoy the interior that Meg and her crews so lovingly restored. The people who attend those events may not meet the person behind these efforts, but wherever she is, she expects to take satisfaction in a job well done.

“La Venta is going to be a 100 years old in 2023, and she has been in service for many, many years. I’m just the next person continuing the legacy. They’ve done extraordinary things here.” Pen