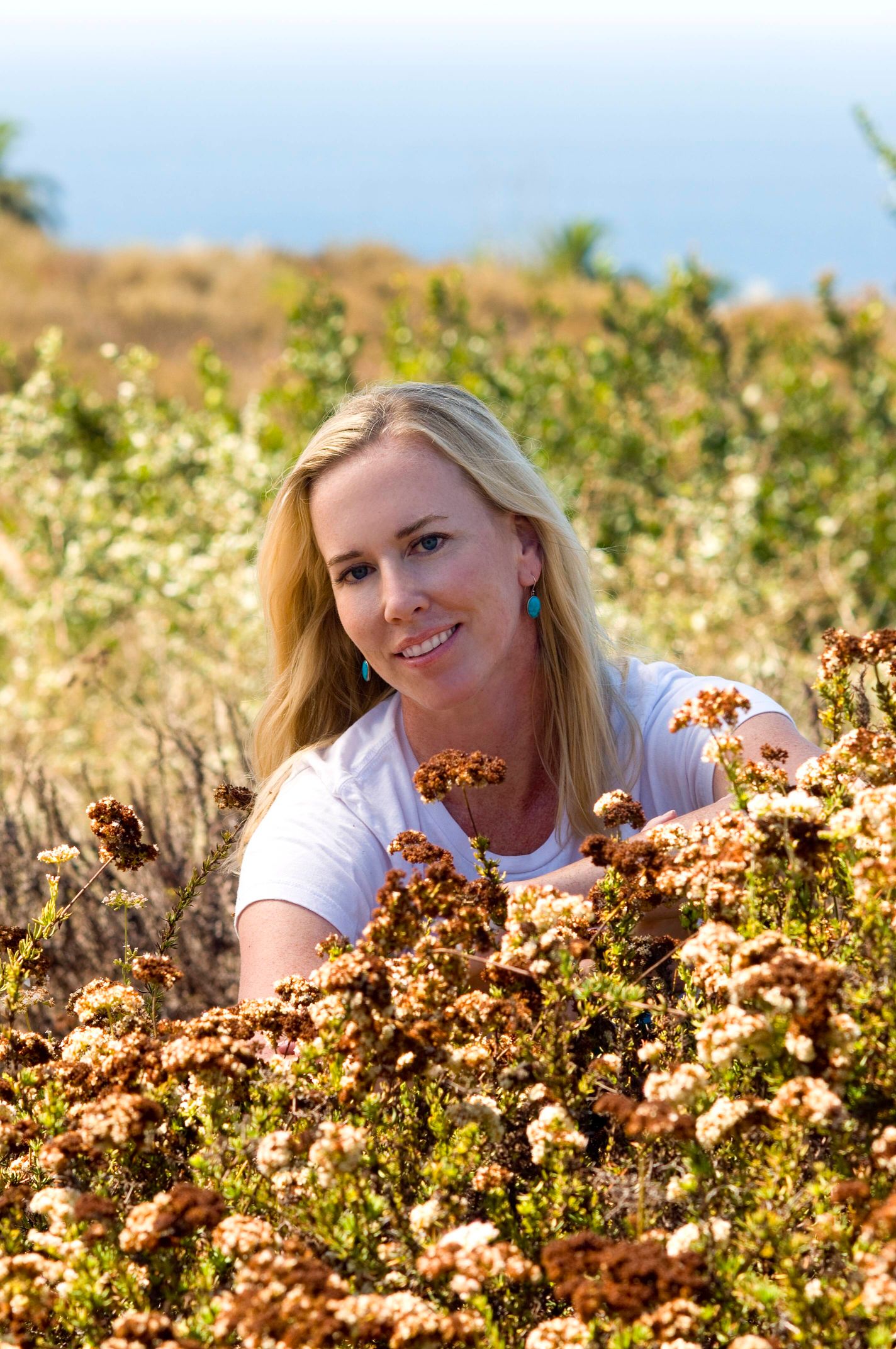 Adrienne Mohan grew up in Long Beach.The first visit she remembers to the Peninsula was for the same reason most kids of that era came here.

“Mom took me to Marineland. Everybody’s mom took them there, but to her credit she also took me to open spaces for hikes, so I developed an appreciation for nature. I learned about our local environment through volunteering with organizations that were restoring the wetlands in Long Beach, and networked into the environmental community.”

As Executive Director of the Palos Verdes Peninsula Land Conservancy (PVPLC), Mohan now plays a pivotal role in restoring local, undeveloped land to its natural state. PVPLC has over three decades of work and advocacy to its credit and manages over 1,600 acres of open space across several cities.

“The Conservancy was founded in 1988 by Bill and Barb Ailor and a cadre of fellow citizens who wanted to preserve open space in Palos Verdes from development which was imminent at the time. They were visionaries, and came up with strategies for working with the cities. That’s something that not all land trusts have been able to execute successfully,” Mohan said.

The Conservancy’s mission has expanded over the years, and now has a problem many other organizations would envy: coping with the amount of public interest.

“The primary mission until 2010 was to acquire the large blocks of open space that now make up what is known as the Palos Verdes Nature Preserve, but we now also preserve other open space areas. We manage the Chandler Reserve, and we are involved in restoring and enhancing the White Point Nature Preserve in the city of Los Angeles, near San Pedro. Those lands have been protected, so our task is to manage them. We need to make sure they’re not loved to death by the community that comes to enjoy the trails. They have rare species that are on the brink of extinction.”

“We are an island here on the peninsula when it comes to ecology, and the local species. The birds and butterflies are non-migratory, so every nook and cranny we can provide is helpful. The butterflies only live five days, so they don’t need a vast amount of open space to find a mate and create offspring.”

Sage Scrub has a wild beauty. However, plants brought by the Spanish and later settlers have largely taken over.

“When it’s springtime and we have poppies and lupin and all of our local species in bloom, it’s gorgeous. The hillsides are painted with color that you can’t achieve in a manicured space. Our buckwheat blooms in the summertime and is food for the butterflies. That view is less impressive in late summer, when things look dead, but the problem plants are mostly non-native. When folks drive down PV South and look up at the hills, the brown stalks they see are dried mustard, an European invasive annual. We’re trying to eradicate it so we can replace it with native plants.”

“We’ve used goats at Lunada Canyon for the past few years, and it has made a great difference in reducing mustard and fennel. A herd can cover a vast area, more than we can whack in a day. Their hooves aerate the soil, and they leave some fertilizer behind while they’re working. They do a great job on slopes and in canyons where access is hard for people. They’re cute too, and the community loves them. People ask about them and it gives us a chance to start a conversation, so they’re another teaching tool.”

Not counting goats, the Peninsula Land Conservancy has a staff of 20 that includes a conservation director and a staff biologist. There are three full time field technicians and a large team of volunteers who include members of the California Native Plant Society.

“We have spaces that we are pretty sure have never been disturbed, and we use those as reference sites. We have also developed plant palettes, lists of species that grow together, that have been vetted in collaboration with other native plant experts over the years. We use that as a reference to guide our restoration efforts and what we propagate at our nursery,” Mohan said.

The nursery supplies not only the Conservancy, but also sells to local homeowners.

“Many people plant butterfly habitat in their backyards to help sustain the butterfly cycle. We propagate about 50,000 seedlings a year at our nursery in San Pedro. What we don’t use in our restoration projects we make available at our nature centers on a monthly basis. We also provide them to the California Native Plant Societies, the South Coast Botanic Gardens, and other outlets. We’re getting the plants out into the communities and offering them to local schools – we just created a native plant garden at Peninsula High School.” 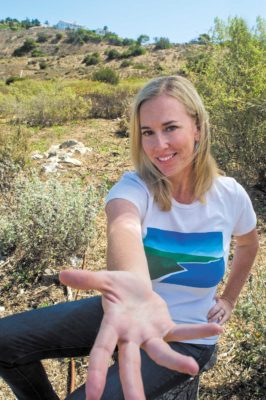 “Rancho Palos Verdes has started putting native plants in their medians, and I understand that Hawthorne Boulevard will be beautified using native plants. That’s a great testament to their support of this idea. We are building relationships with homeowners associations, showing them how native plants can be beautiful and also conserve water. It’s still a learning curve, getting people to appreciate natural landscapes versus manicured gardens, but I think a happy medium can be achieved. It won’t look like the hillside before it was degraded, but they can integrate native plants into a planned landscape.”

The many successes of the Peninsula Land Conservancy will be celebrated on October 27 at the Palos Verdes Pastoral event at Terranea. Executive Chef Bernard Ibarra will develop a menu that includes raw, local, and handcrafted ingredients. Mohan said the location is appropriate because Terranea was designed with the local environment in mind.

“Terranea’s leadership really values the land. They wanted to create a development that fits the character of Palos Verdes. Native plants were in their plans from the beginning. There are 250 tickets in all, and it sells out every year. This year the theme is the historic relationship between land and sea, but there are two anniversaries to keep in mind.

“We’re celebrating 30 years of saving open space on the peninsula, and it’s Terranea’s 10th anniversary. We want people to enjoy the food and sustainable, paired wines, and through the menu we want to highlight some of our important goals. We want to remind people that we’re protecting the land for the next generation, and to highlight how the land has inspired people. We have docents who have been with us for 15 or 20 years because they enjoy working with children and sharing their love of nature. We’ll have a display table to celebrate the Tongva, the Ishibashi family, and even the ranching era because that is also a part of our history. Even our cocktail will represent the theme of the event.”

Chef Ibarra didn’t reveal any specifics, though he gave clues about how he is thinking about the event.

“We use the local salt and lemonade berries, we harvest the prickly pear cactus fruit that has always grown here, and also some nettles that are wild here. They are sweet and a little bit acid, and we make jam and barbecue sauce with them. For dinner with the conservancy we will be using even more of those products. I have a meeting scheduled with a descendant of the native people, Virginia Carmelo. Terranea is on the land of her tribe. She knows about the plants that grow here and how they were used in her culture. I was almost shaking when I got her name, because I finally had a link to the people who used to live here. I want to get details of what they were using, maybe some of the recipes and how to recreate them as a tribute to her people.”

For tickets to the Palos Verdes Pastoral and more about the conservancy, go to pvplc.org.