Life, always hanging in the balance 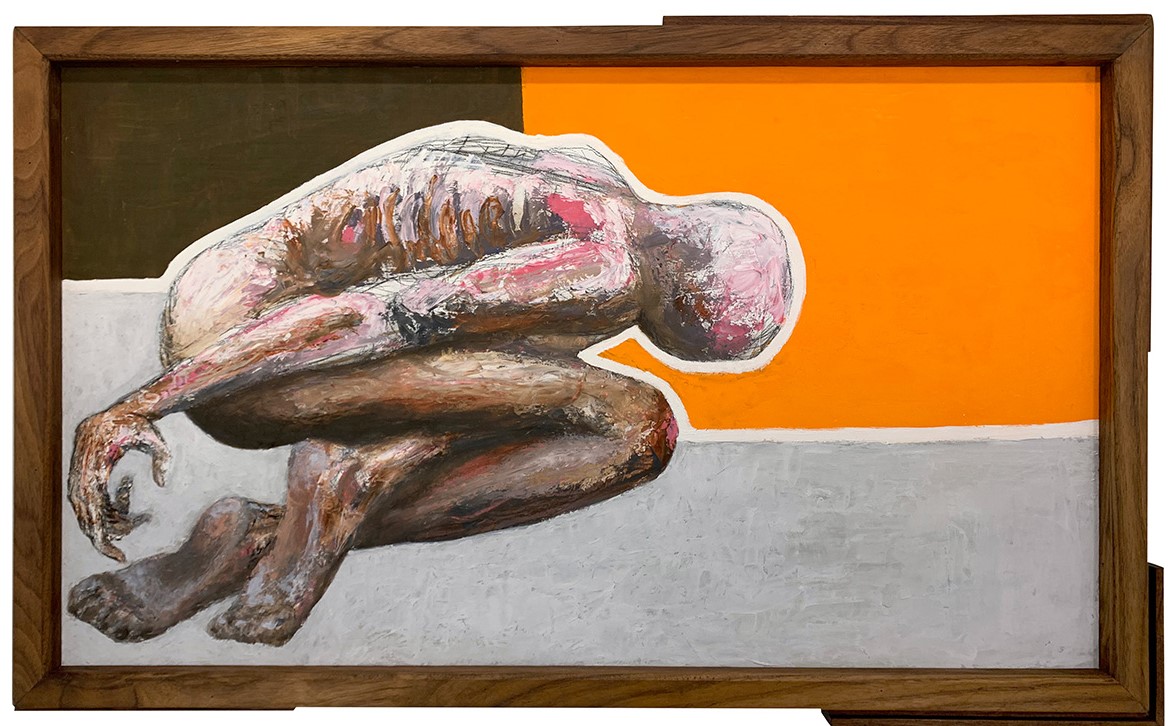 Struggling within the jaws of the universe

The figures in Scott Meskill’s recent and not-so-recent paintings are pretty much cut from the same cloth. Generally speaking, they’re male, nude, and often in a curled or contorted position. None of them have smooth, flawless skin, and several call to mind an écorché, a figurural study in which the skin has been removed in order to highlight the musculature of the body. Leonardo da Vinci and Andreas Vesalius are two artists who drew these in order to better understand human anatomy. Think of Body Works; it’s kind of like that. 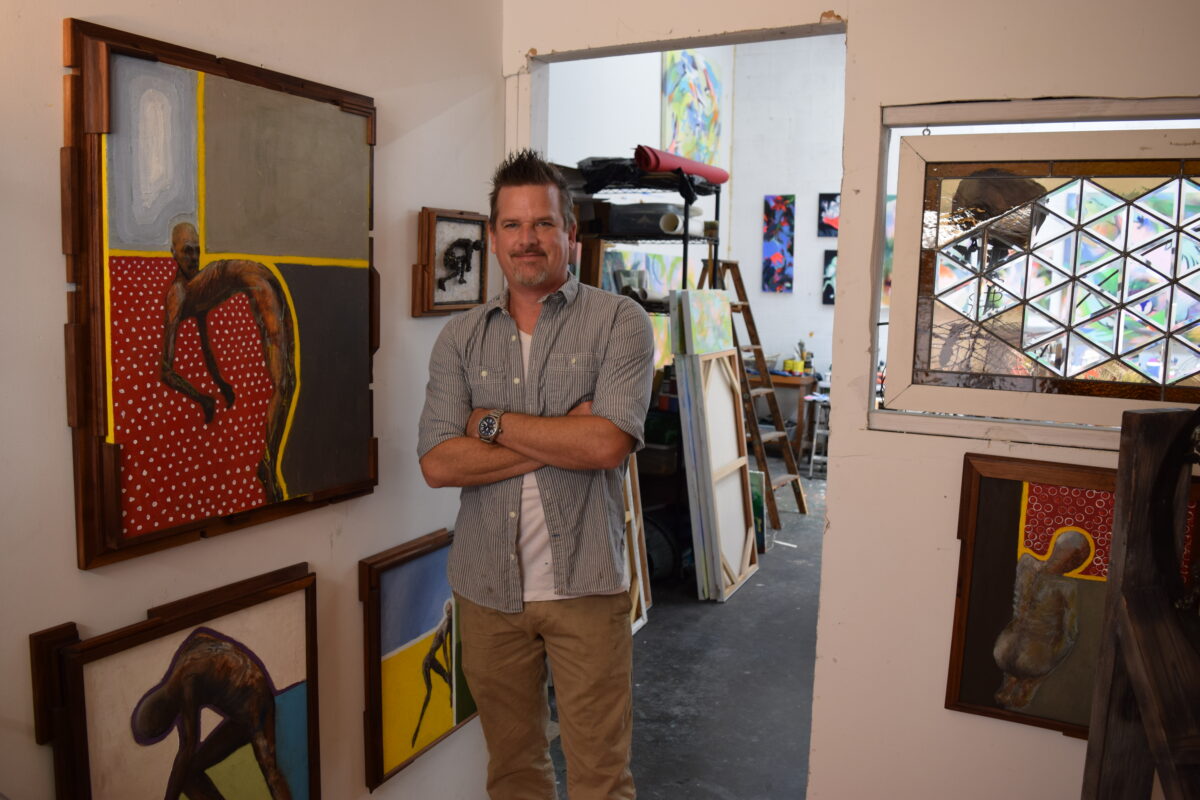 Scott Meskill in his studio. Photo by Bondo Wyszpolski

Meskill’s figures may be stripped of their clothes and even their skin, but they are certainly not stripped of their humanity. What they are scraped clean of, flayed if you wish, are the social baggage and veneer of rules and regulations that are imposed on us from the outside. That’s my take, at least: These are raw human beings, exposed and naked before the world. 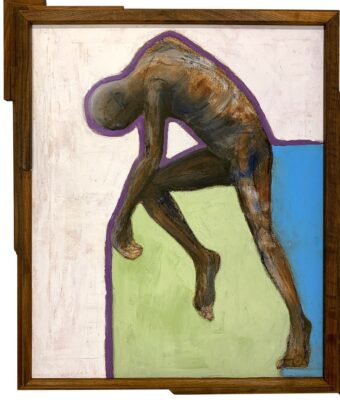 “Morals in the Dust,” by Scott Meskill

In many of his previous paintings, Meskill’s figures are set into a background that harmonizes with or mirrors their predicament. If they’re suffering, so is the air around them. Meskill points to one picture with, in his words, a downtrodden character. “Where would he be? He had to be on a curb; that was in my head, that was the simple process.” The result was a painting atmospherically fused in foreground and background. “My comfort zone is those dark, muddy colors,” he says. “I would do a figure and it would be in a shadowed room, cubed in, boxed in, and there would be one light, bright window.” A few are reminiscent of Francis Bacon with their squirm factor. However, hanging out at ShockBoxx gallery and eyeing the vibrant work of local artists Drica Lobo and Preston Smith, Meskill realized that he didn’t have to keep his figures in what often look like isolation chambers. “I was, like, no, this character can be on squares, he can be on blocks of color. I was thinking more like an illustrator.”

By retaining the same style of figures he’s employed in the past but now giving them a different background, Meskill has generated a new dynamic. I’ll explain how that came to be. 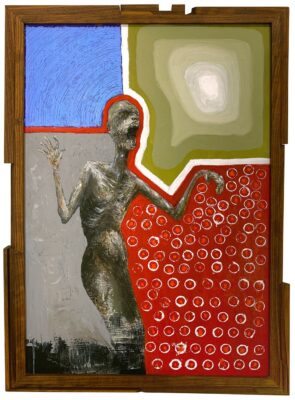 “Walking on Splinters,” by Scott Meskill

Scott Meskill lives in Redondo Beach but has a large working studio in Hawthorne that he now shares with two other artists, and so when one steps into the space it’s not unlike entering a living, evolving art gallery. And Meskill is, to borrow a musical theater term, a triple threat. He not only paints and sculpts, but creates decorative objects and even furniture from wood, metal, or stone. On occasion he combines all of his skills into a singular work of art.

But let’s examine the backgrounds of his latest paintings. In one sense they’re suggestive of stained glass windows. True, Meskill’s not using pieces of colored glass, but the thick outline around the figures is reminiscent of the lead cames into which the cut glass is slotted. What’s common to both is the visual segmentation. 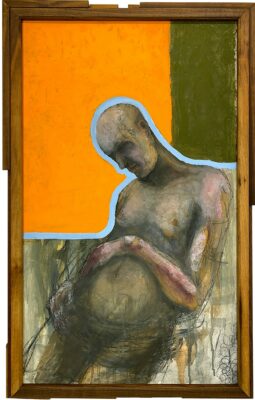 “Knots That I Don’t Untie,” by Scott Meskill

Meskill created this work during the height of the pandemic. “Later, when I looked back at it, I was like, That’s representing the compartmentalization of our lives.” People, he saw, had sectioned off their daily or routine activities: school went into one box, if they had kids, jobs went into another box, social relationships into a third, figuring out how to safely buy groceries perhaps going into a fourth, and so on, with Zoom becoming a box (or at least a mixed bag) all its own. Social distancing rules were at the heart of it, but not every little box or compartment was necessarily bleak. What Meskill has done, I would say, is symbolically materialized them. However, the blocks of color and pattern are not labeled. What they stand for, if they stand for anything, is entirely up to us.

“So you’ll see in those paintings little bright sections of color and some that are textured and muddy and thick and layered and confusing. I looked at it and said, This is a great body of work, but what does it mean? And then I had to think, Okay, well, I’ve been in the pandemic and we’ve been isolated, and we’ve been sectioned off from other people. I know a lot of people who were having a very hard time coping with not being social.” But for Meskill, as for many visual artists who preferred solitude to begin with, pandemic restrictions almost came as a blessing: They went into their studios and, figuratively speaking, stayed inside making art for well over a year. 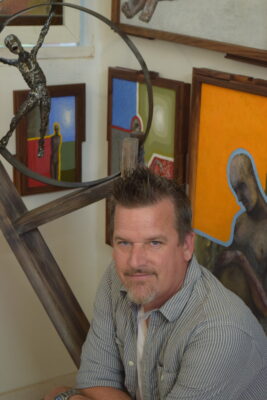 Scott Meskill in his studio. Photo by Bondo Wyszpolski

Those three or four fields of color around each painted figure allow that figure to “pop out” in a way it might not have done before, and it also allows the viewer to construct a different sort of narrative than the one Meskill pointed us towards. Now it’s just us and a clearly vulnerable figure. “I like the more expressive moments and positions,” he says. “When you see that human curled up there’s empathy, there’s sympathy. Hopefully you feel for that character and what they’re going through in that process, and you want to dive in a little more.”

The important sculptural component of the show, which takes its title from a small, relief-like wall piece, enhances and complements the canvases, and further showcases the range of Meskill’s talents. I think back to what I said earlier, about vulnerability, and perhaps one may see these figures as standing in for our own struggles to get on in this world, and to find our place in it for whatever brief moment of time we will be granted. 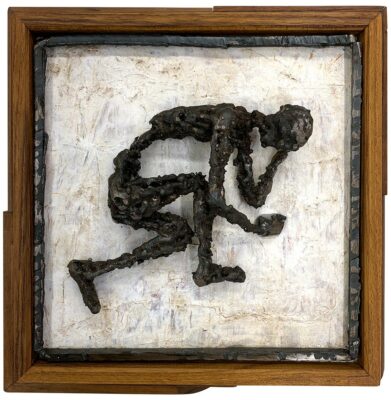 Art isn’t a quest for definitive answers, we know that; but if we are deeply moved by an artwork shouldn’t that be enough?

“Some of the best compliments I’ve ever gotten,” Meskill says, “are like, Your work makes me feel. I don’t know what it makes me feel, but right now it just makes me feel and that was the best emotion.” That’s the kind of validation most artists will happily accept.

This isn’t pandemic art, whatever that means, but it was created during the pandemic and undoubtedly in some unconscious manner was formed and informed by it. The result is a small body of work, thematically unified and potent. Serious, heartfelt and challenging, it demands an audience to experience it in full, in the flesh. And now that’s possible.

Fall Downward and Rust, paintings and sculpture by Scott Meskill, opens with an artist reception at 5 p.m. on Saturday, July 17, at ShockBoxx Gallery, 636 Cypress Ave, Hermosa Beach. Through August 6. Call (310) 989-4323 or go to shockboxxproject.com. ER