Love Started With a Trip: A Week of Surf and Stories in Nicaragua 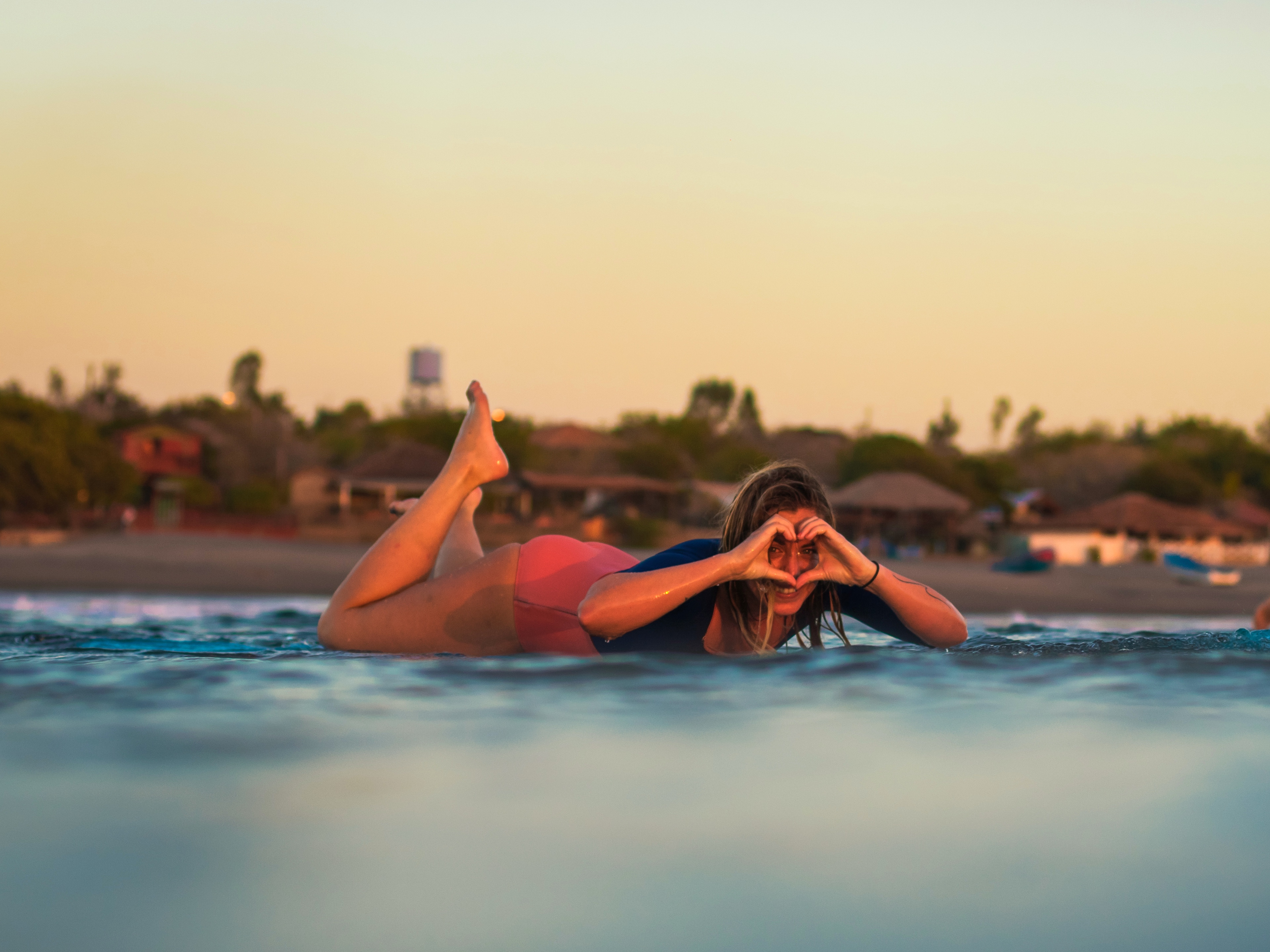 Love can be felt in many contexts.  Its sensations aren’t just bound by the story of two star-crossed companions — love is the foundation in a group of close friends.  And for a specific group of South Bay wanderers this past week, love started with a trip.  A trip to a dirt poor Third World country with a band of people that for some, had only shared conversation through a mildly hilarious popcorn of group texts.  There was a road ahead of endless unknowns, but we all shared common goals of waves and ridding ourselves of California winter-induced wetsuit neck tans.  There were the obvious expectations of sand and surf.  But less expectedly, from the very beginning of our journey, the trip started to become less and less about the surf, and more about what was to be found in between.

La Barra Surf Camp in Nicaragua, popular surf location of Adventure Sports Tours was the destination, a big house broken into quadrants of comfortable bunk-laden quarters that made ten of us instant roommates.  Four surf spots were mere steps down the cliff and dozens more a short boat ride away, which made for almost zero downtime.  To fill the small gaps were the jalapeno margaritas at La Barra’s Single Fin bar, a terrace lined with hammocks swaying in the all-day offshore wind, perversely inappropriate nighttime games of Cards Against Humanity, and the perpetual melodies of lovers Joey and Suzi harmonizing together their candy-coated voices, often strumming the Ukelele to Vance Joy’s “Riptide.”  And in few larger gaps, some of us had the chance to experience the love overflowing from a country that knows nothing of wealth. 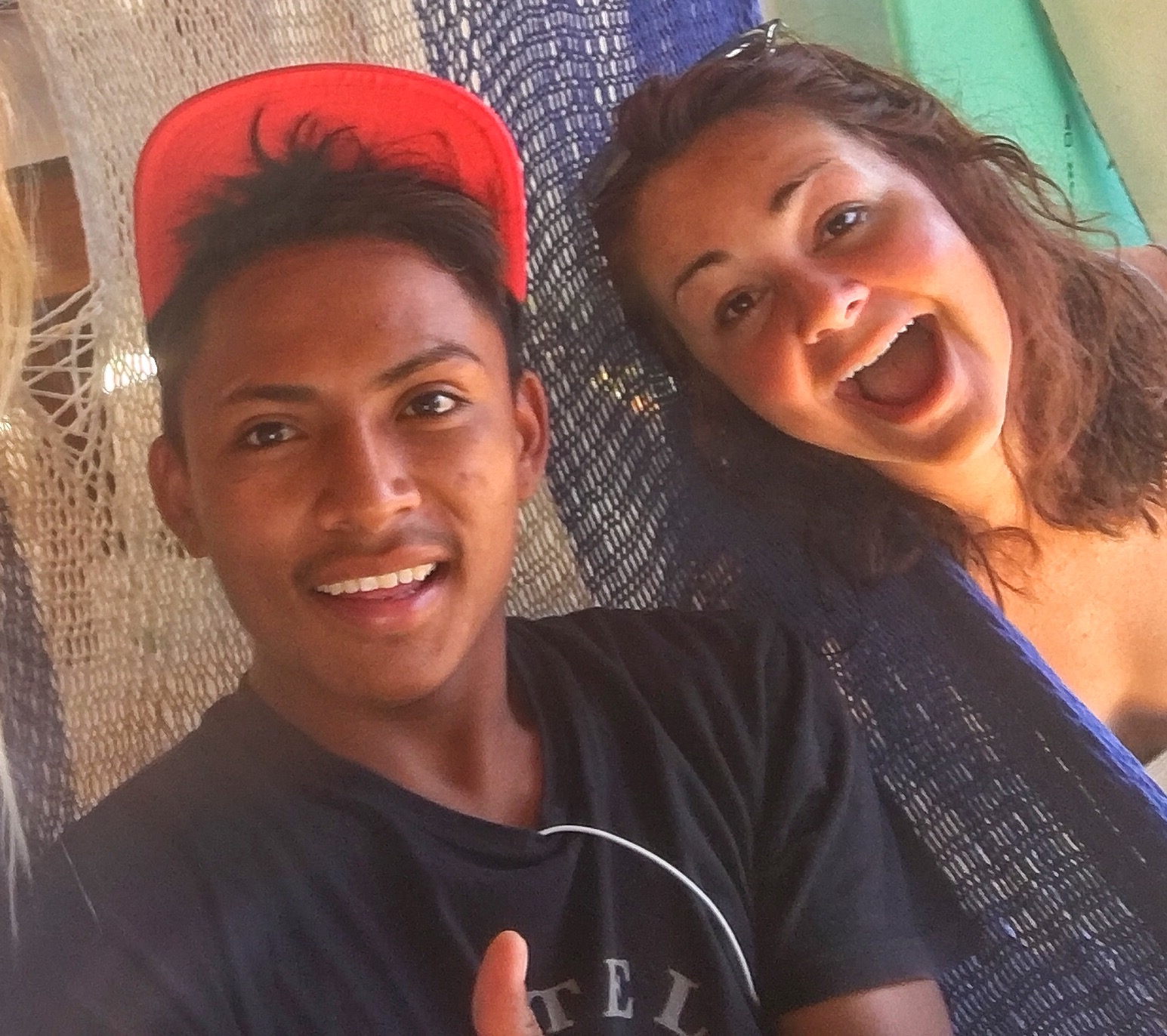 Luis, La Barra’s surf guide, is a confident 20-year-old edgy-but-friendly local ripper who has a bright smile that softens his rough-around-the-edges demeanor.  We entrusted Luis with a task that required finesse, planning, and a lot of logistics.  Along with our own supply, we had in tow six surfboards generously donated by charitable people from the South Bay, and made Luis the boss in developing a plan to get the boards into deserving hands, those who would benefit from and use them most – and most importantly would love and appreciate them as they had been loved and appreciated by the owners before them. 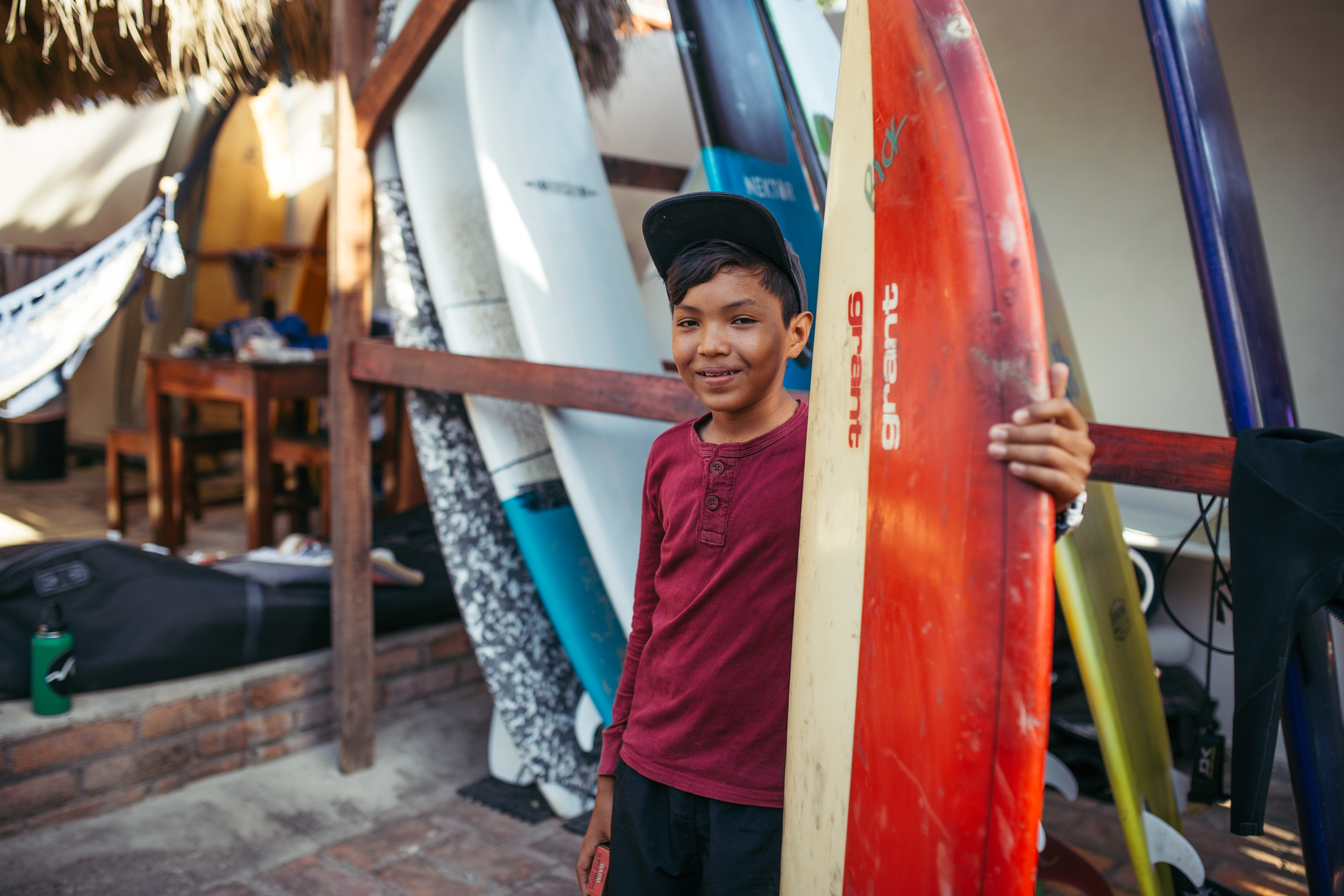 Jonathan, with his first ever surfboard donated by Rick Haberman. Photo Jerson Barboza

He had nothing to gain from the task, and wasn’t keeping a board for himself, but Luis was steadfast in his mission and took to it with great care and compassion – a softened side brought to the surface in him that I hadn’t before seen.  Luis rounded together three shy kids to come by the camp on Wednesday, and matched the children with appropriate boards by expertise and experience.  He translated our interviews with the kids, and I could see him internalizing and thinking about his own answers to questions such as, “What does surfing mean to you?” “Why do you love the ocean?”  The next day, he drove professional longboarder Christian Stutzman and I an hour and a half south to Panchomilla, a seaside fishing town where his friend Cesar, a local restaurant owner, had collected some very-used boards and kept them as a communal pool for kids that wanted to surf and had no other means or board.  We had three fresh sleds to brighten up the stockpile of tarnished foam and sheets of fiberglass, and spent two hours with the group of young boys with ear-to-ear grins trading off riding the new boards.  When we got back, Emily and Juan, surf camp manager power duo, conveyed to us how Luis was speaking about starting a board pool of his own and his yearn to make equipment available to the up-and-coming young surfers of Puerto Sandino. 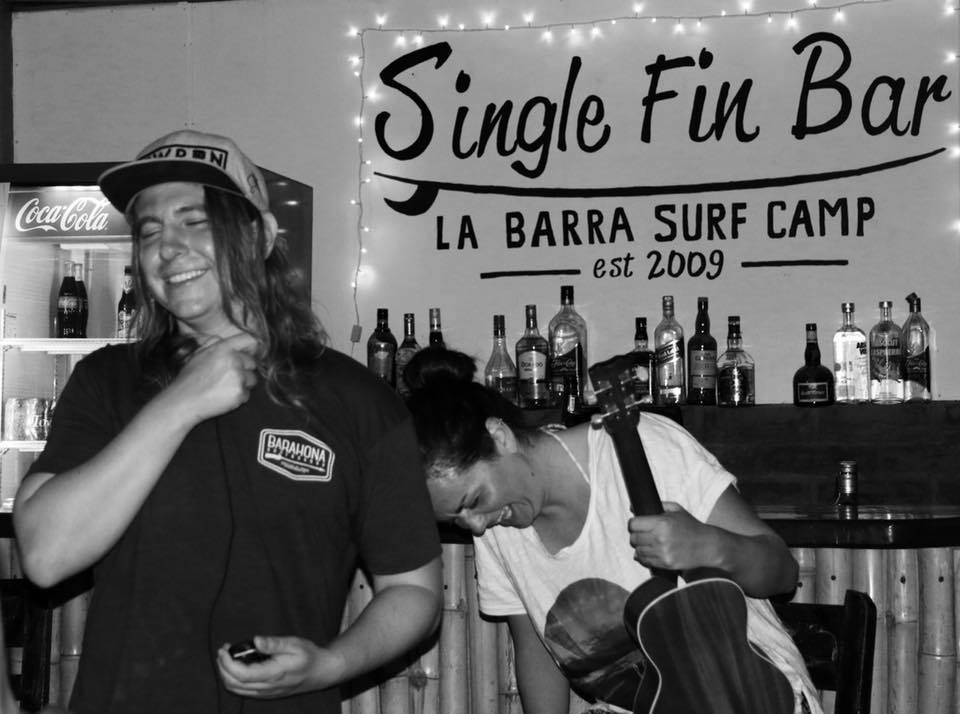 Love was felt in stories on Thursday night.  Jen Capo, founder of Life Aquatic: Ocean Dwellers and Storytellers, threw together a Nicaraguan style pop up edition of the storytelling event complete with a stage, candlelight, audience, programs, and “Dark and Stories” drink specials.  Each member of the crew told a personal five minute unscripted story inspired by the ocean, which were all accompanied by tears, laughs, and falling into the looking glass of all our travel partner’s eyes for a few moments – which bound a tightly growing group even tighter.

Travel really entwines you with others – most of us started as fairly fresh acquaintances, and a few days into the trip became family.  Suzi and Joey were the musical bread and butter.  Jen, the witty storyteller and Brendan Simmons, the worldly surfer and photographer.  There was Marion Clark, wise teacher, and Layla Lari, youngest of the bunch and surprisingly the most adaptable.  Christian, the soulful longboarder with a big, infectious smile.  Val and Jeff – adventurous, beautiful couple.  And Kathy Berry, a last minute camp add on from the East Coast that ended up being a crowd favorite.  Whether cross country strangers or close friends you think you think you know the ins and out of, you very quickly get to know the fundamental baseline of who your comrades really are.  There is no hiding your true selves from enduring the stresses of travel or the pure joy and elation of new sights, sounds, and feelings.  And traveling with a big group, all different ages, personalities, and idiosyncracies – for that to be seamless, takes a lot of love from everyone. 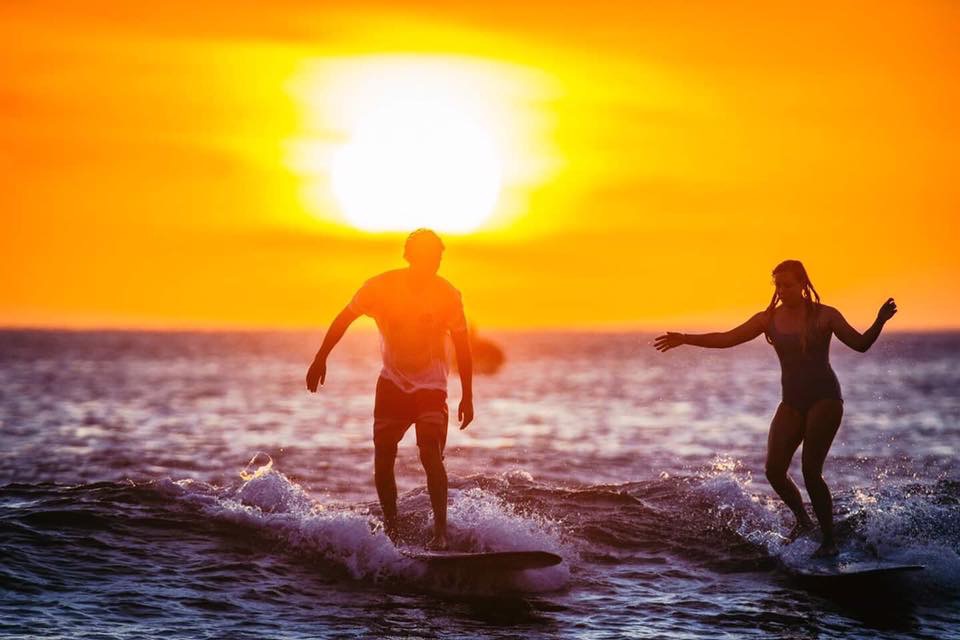 The explosions of purples and reds painted across the sky from the fiery sunsets at Pipes stunned a chatty crew into silence as we floated there, soaking in the love given to us from the world in that moment.  Most of our waves had been caught at Pipes and at the group favorite a boat ride away at El Transito, until Brendan Simmons’s one true love – the hollow left at Chicken Bowls directly to the left of the camp – finally started working Saturday afternoon.  We spent hours navigating the razor-sharp reef and trading off on barrel after barrel – and for just one wave, the clouds shifted, the sky opened up, the water started glimmering, and I turned around after my own heaving set wave to see Joey Anderson get the literal wave of his life.

Love was really summed up on the last day of the trip.  We had some clothes and monetary donations that needed a home, and super couple Emily and Juan recommended we speak with Pastor, local community activist who had started a program called Miramar Sunrise this past September, which involved beach cleanups, English lessons, gardening, and more in a poor area which otherwise has no knowledge on the environmental effects of beach trash.  I spoke with Pastor the previous day and asked about a Sunday morning beach cleanup with a few kids before checking out the facilities at the church where they hold the English lessons and other various activities.  Sunday morning came and everyone, including me, was moving at a snail’s pace from the previous night’s celebration.  Juan found me struggling through my second cup of coffee and with a smile said, “The kids are here.”  I walked out to the terrace and my jaw dropped as I looked down to the water’s edge at nearly 50 smiling faces, brightly colored shirts, and little hands clasped around plastic bags. 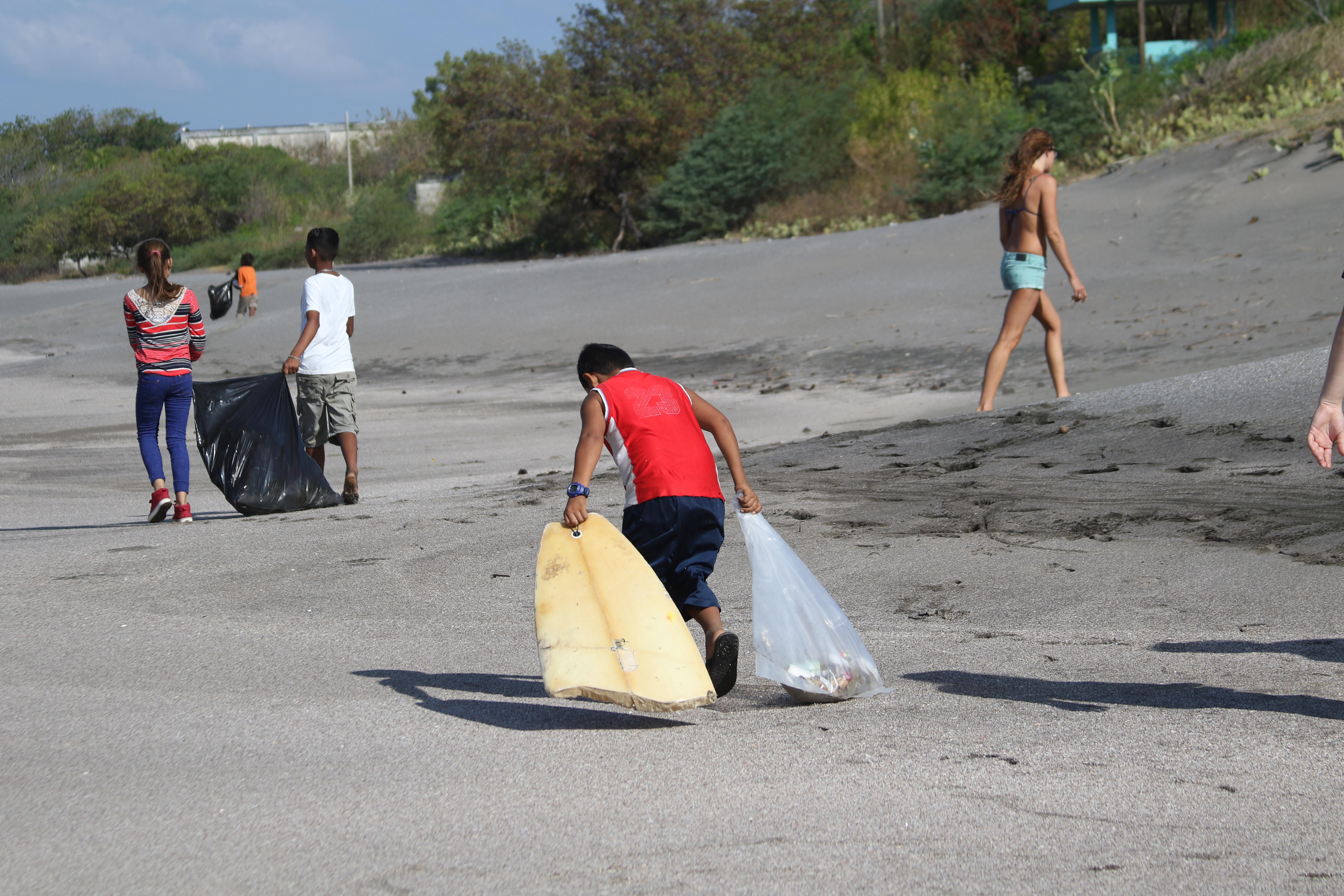 Luke, the camp Labrador, circled our group as we spent an hour on the hot sand filling seven garbage bags to the brim with bottlecaps, straws, and other beach refuse.  One by one the rest of the tired group started to trickle down, and we all looked at each other in different moments of amazement as we shared conversations in broken Spanglish with children and parents of different ages.  Layla, our group-dubbed model, was feeling inspired, and in the midst of all the action decided to leave her beautiful pink longboard behind for Pastor to use for the kids.  Oliver, maybe 5, was attached to my hip, and as we picked up trash and tried talking about the ocean, his toothy grin stole my heart.  He took my hand for the walk back and it was hard to let go. 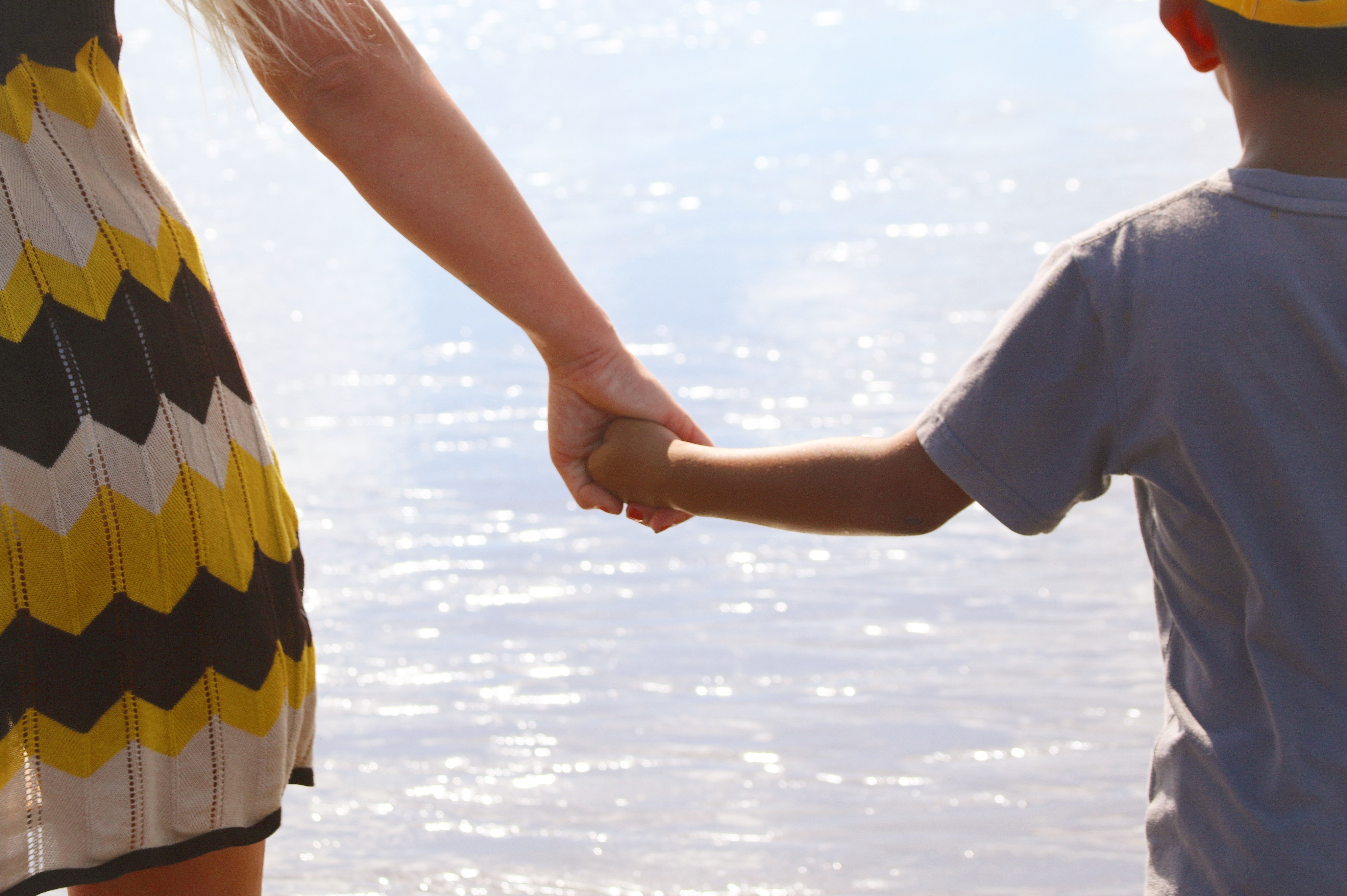 Pastor invited Suzi and I to the church where the first steps inside never made my already full heart overflowing.  Twenty-five kids were circled in chairs. Each child proceeded to stand, introduce themselves, and state their age and favorite color – all in English.  Pastor led us outside to the peppers they’ve been growing in the garden, and outlined his plans to build a kitchen and bathroom facilities next to the church to truly make a communal area that is self-sufficient.  Along with his big heart, he has big plans, and wants to implement his Miramar Sunrise program in other communities.  His inspiration has left a mark in each member of the program, and his love for people has been the spark igniting a caring sense in children that were before indifferent, aloof, and somewhat narrow-minded.  They are the ones now tugging on his sleeves every week asking what they can do to help, or wanting to organize beach cleanups of their own.  As it was time to leave, my hand unclasped from Oliver’s, and he said in Spanish, “I’ll miss you.”  I gave Pastor a huge hug, and we both agreed that this was only the beginning – saying goodbye for now. 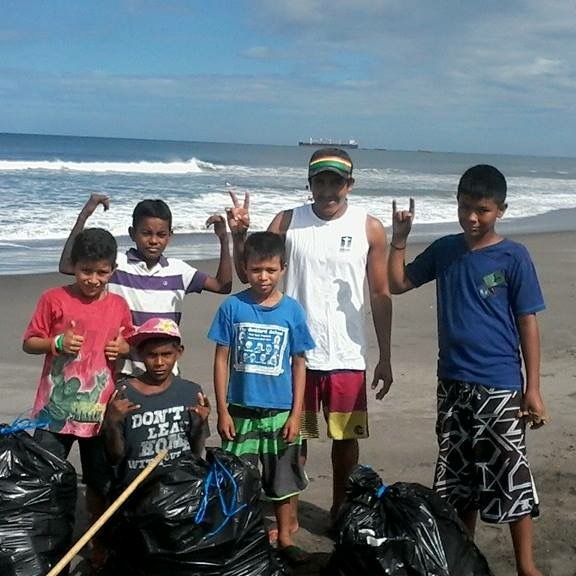 Pastor with some of his local helpers.

Love isn’t strictly defined.  It isn’t bound together between roses and chocolates.  The material aspects of love are where the word love gets lost.  Love is in the air, in the salt.  It’s in our connections to people, it’s in the garden of community.  We feel it when we are the most vulnerable, walking around barefoot without painted faces for a week amongst strangers.  We see it clearly when the world is blurry from the six hour surf session we just had with newly close friends, or when we hold a child so tightly in our arms that doesn’t speak the same language.  Love is the selflessness of Pastor, who gives everything he has only to receive nothing back.  And most importantly, love is in all of us.  Sometimes it just takes a trip with a group of silly folks to remember that you can find love anywhere.