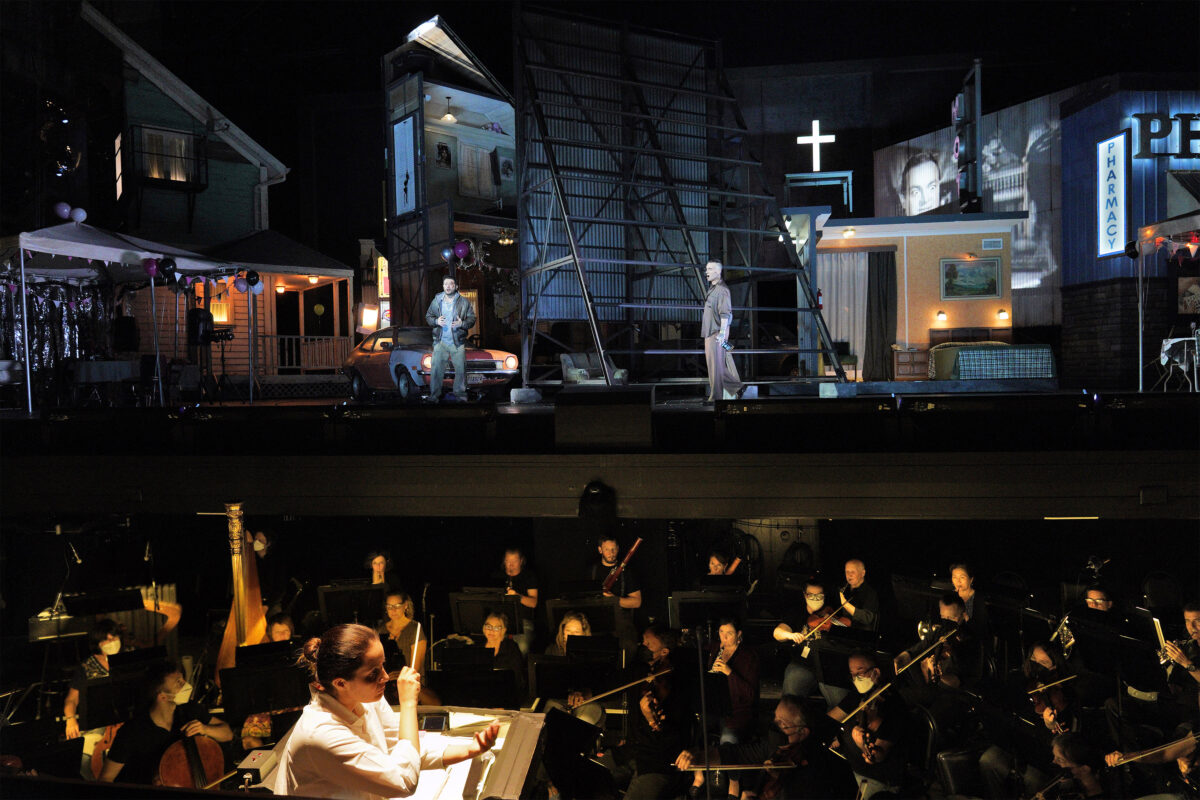 Arturo Chacón-Cruz as Edgardo and Alexander Birch Elliott as Enrico, with Lina González-Granados in the orchestra pit during rehearsals. Photo by Cory Weaver/LA Opera

It’ll get a little crazy

Things are frenetic from the get-go in “Lucia di Lammermoor,” Gaetano Donizetti’s tale of murder, madness, and betrayal. Bolstered by Salvatore Cammarano’s smart libretto and based on Sir Walter Scott’s 1819 novel, “The Bride of Lammermoor,” the opera premiered in 1835 and is normally set in and around Ravenswood castle south of Edinburgh.

Under the direction of Simon Stone, however, we’re now in a depressed suburb of the Midwest, maybe in the 1970s or ‘80s since the Ford Pinto hasn’t been manufactured for over 40 years. It’s actually one of three authentic vehicles that periodically share the stage along with cast, chorus, and more façades than Main Street in Disneyland.

This is a new production of an old standard, co-produced by LA Opera and the Metropolitan Opera of New York. It opened last Saturday at the Dorothy Chandler Pavilion to kick off the 2022-2023 season, and if the intention was to make a big splash then by all means it did just that.

Stone, and most of his collaborators — including scenic designer Lizzie Clachan, lighting designer James Farncombe, projection designer Luke Halls, and costume designer Blanca Añón — are making their LA Opera debut, and they’ve brought into town a storehouse of ideas and concepts. This rendition of “Lucia di Lammermoor” goes off on a tangent the likes of which we’ve rarely seen, and for the most part it’s dazzling and engaging.

Even so, as immersive as this production is, at times we seem to have one narrative for the eyes and another for the ears, simultaneously and not always in sync. 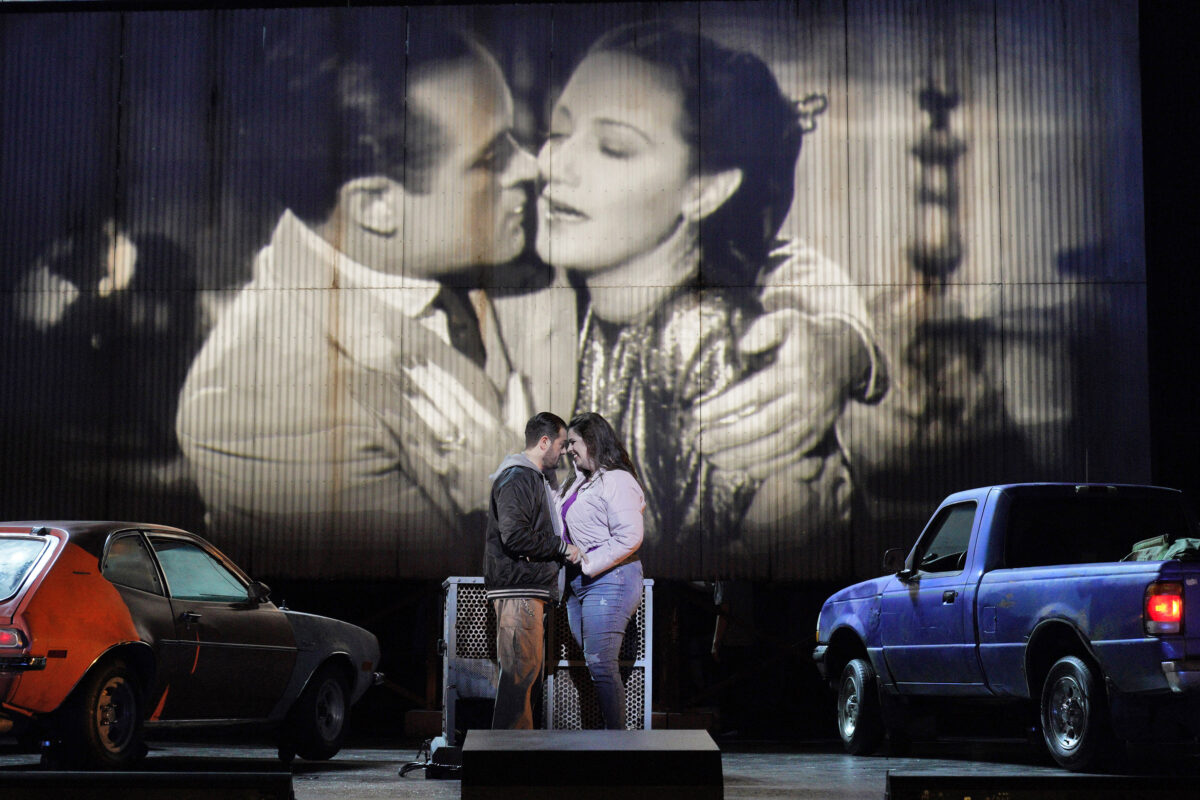 Here’s the gist of the tale, with who’s who in the cast:

Enrico (Alexander Birch Elliott) has blown through the family savings, and so he conceives the idea of marrying off his sister Lucia (Amanda Woodbury on opening night) to wealthy Arturo (Anthony Ciaramitaro), the latter looking dapper but a little cheap in a flamingo-pink suit. Maybe he runs a used car dealership? Enrico himself has the demeanor of a rat-faced thug as channeled through Johnny Rotten.

Opera, of course, is always chock-full of coincidences, and we don’t waste any time getting to the first one, in which Lucia is the target of a mugging or purse-snatching. The hero who comes to her rescue is none other than Edgardo (Arturo Chacón-Cruz), whose father was not only killed by the aforementioned Enrico, but swindled out of Ravenswood. Or, to put it bluntly, Edgardo saves and then falls in love with the sister of his worst enemy, who he has pretty much sworn to avenge.

Any sort of action and dialogue initially set among the moors of Scotland during the early 19th century won’t chime in perfectly when transposed to another country, another culture, and another century. And then, of course, there’s the music and Italian bel canto singing, which is hardly in the contemporary style of, for example, Philip Glass or John Adams.

To continue, Lucia and Edgardo pledge their love, and then Edgardo must temporarily leave. In this retelling it appears that he’s gone overseas, maybe to Iraq or Afghanistan. Later, when we see him, at least from mid-orchestra, he looks not unlike Volodymyr Zelensky: all he needs is an olive-green T-shirt and army fatigues.

The good soldier and faithful lover writes, but his emails are intercepted by Enrico, who shows them to Normanno (Anthony León), a stand-in for the audience, really, in that this is how we learn what the villain is up to. And what he’s up to is to concoct a fake email purportedly to show that Lucia’s Edgardo is carousing and whatnot with another woman. 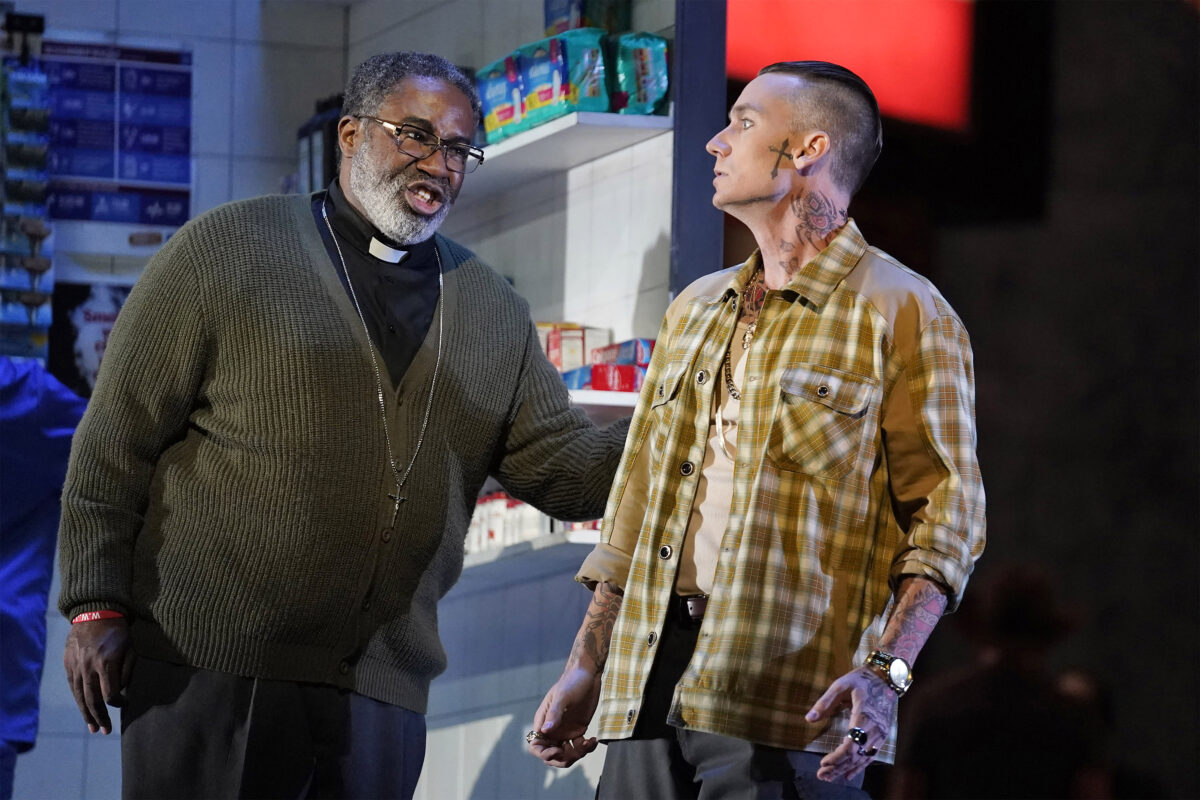 Lucia, who doesn’t seem particularly stable anyway, is thrown for a loop. It’s at this vulnerable moment that Raimondo, the chaplain (Eric Owens) steps in and convinces Lucia that it’s best she forget about her deceiving lover. I forget whether or not Raimondo is in cahoots with Enrico, but it sure seems that way.

Although she still refuses to believe that her Edgardo is such a cad, Lucia eventually signs the marriage contract. There’s a large gathering in attendance, a Gatsby-like party that is also reminiscent of the one in “La Traviata” where they sing lustily, drink beer, and toast one another to the heavens.

At which point Edgardo shows up: Hey, what’s going on here? A ruckus ensues, there’s a brilliant sextet, all the leads going at it at once, and then the chorus joins in. It’s a moment to give in and savor. And that’s how the second act ends, with everyone pumped up. 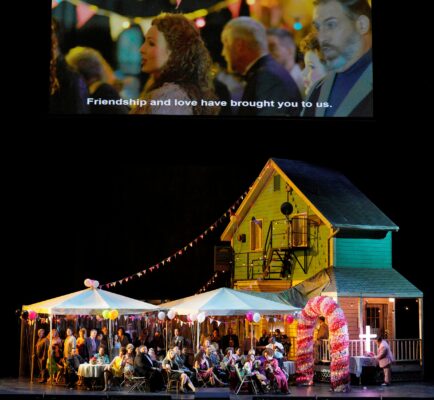 The third and final act has a thunderous beginning, real thunder this time, with Enrico and Edgardo agreeing to meet at sunrise for a duel. We seem to be anticipating “West Side Story” or “Rebel Without a Cause” by nearly two centuries, and then we’re back at the party, with an increasingly carnivalesque feel to it as if the set designer wanted to inject the best of Franco Zeffirelli into the proceedings. The chorus is really going full steam at this point (who’s been paying for the food and drink?), but then it all goes south when they learn that, in her bridal bed, Lucia has killed Arturo. And, in this production, not just killed him, but battered him into raw hamburger with a fire extinguisher.

Now we have the scene for which this opera is famous. Lucia emerges and comes down a staircase, her white wedding gown soaked, and I do mean soaked, with Arturo’s blood. It’s a scene that might have come straight from “Halloween” or “Carrie.”

Lucia has gone crazy, and she sings her first cavatina (“Andon’ gli incensi”). One can debate the merits of Woodbury’s delivery, but she certainly gets through it nicely without any missteps and for all that effort receives a rousing, and deserved, ovation.

Edgardo, when he’s told what Lucia has done, is truly shocked, and he gives us doleful singing to prove it. But when he is subsequently informed that Lucia is now dead he’s devastated. During this scene he has been brandishing a pistol and finally — shades of “Romeo and Juliet” — he shoots himself and slumps down next to his pickup. No one rushes to his aid, and no one calls out, Is there a doctor in the house? Edgardo dies, and so does the opera.

Okay, now let’s go back to the look and feel of the opera, which is being conducted by Lina González-Granados, making her debut with LA Opera. She’s also the company’s new resident conductor, so we’ll likely be seeing her again in this and future seasons. I, for one, was pleased by her endeavor. She conducted with studious care and attentiveness.

The opening scene of the opera, with Edgardo coming to the rescue, probably throws many audience members off-balance, especially if they’re familiar with versions that adhere closer to the original design. In this scene, and during several throughout the performance, there’s a videographer on stage with an assistant, kind of like a news crew, and they’re live-streaming what we’re watching projected on a screen overhead, above the stage and its revolving set. It has a split-screen effect, and one’s eyes will bounce up and down. The benefit of this is that we get closeups of the singer-actors while at the same time being able to take in the entire set all at once.

While this is inevitably distracting, because it’s nigh impossible to also focus intently on the singing and the music, there’s at least one scene where it’s quite effective, and this is when we see Lucia stumbling about on stage, clearly thinking of Edgardo and her love for him. He’s not present, of course, but in the overhead projection, filmed on another occasion, we see the two of them together. Which is to say that the film portrays what Lucia imagines.

Simon Stone has not only directed other operas, he’s directed at least two films, “The Daughter” (2015) and “The Dig” (2021), the latter starring Carey Mulligan and Ralph Fiennes. So he’s got a cinematic eye, and he’s fully embraced it by loading up the production with a barrage of sets and props, from the Ravenswood “castle” to various storefronts and even a drive-in movie theater that’s showing clips from “My Favorite Brunette,” the 1947 film with Bob Hope, Peter Lorre, and Dorothy Lamour (not sure what the connection is, unless it’s Lamour and Lammermoor).

These sets aren’t simply pushed on and off the stage, but are constantly in motion and rotating on a revolving turntable. It’s the equivalent of a camera panning along a street with several businesses.

Visually, it’s a feast, and in that sense truly grandiose and operatic, but for some attendees it may induce a kind of sensory overload, especially if one has come to listen to the singers and the orchestra. Well, good luck keeping focused.

As mentioned, there’s no escaping the libretto, even if it’s been adapted somewhat, and naturally the pace of the music. Some things you can’t play free and fancy with, and so in places the storyline and how the characters act and react seems rather peculiar. For better or worse, Stone is tethered to his source material. That said, this is a first-rate production which should also entice a younger audience, one that may have grown up thinking of opera as fussy and old-fashioned.

Let me also point out that this was the 46th of 73 operas that Donizetti composed during his relatively brief life (clearly he wasn’t squandering time on social media). It’s considered his best work, but then again he also gave us “The Elixir of Love,” “The Daughter of the Regiment,” “Maria Stuarda,” and “Don Pasquale,” all of which have been staged locally. I wonder if any of them are next in line for a complete makeover as well, always a mixed blessing to be sure.

The opera season is just getting started, but visually, at least, this one may be the most audacious and appealing, and perhaps the most memorable. It sets a high bar for the five or six that follow.