Magic in the kitchen [restaurant review] 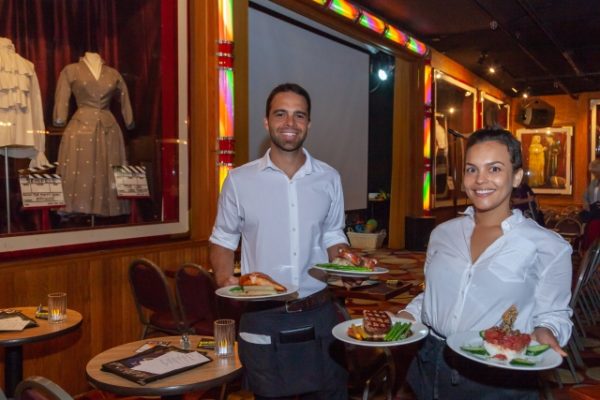 Let’s get this out of the way first: you didn’t go out for dinner at the Comedy and Magic Club primarily because you liked the food. You are there for the show, and the food is secondary. This is not a secret to them, or to any other entertainment venue that also serves food. You are what the industry calls a captive audience, and there are some club owners who exploit that to the hilt.

At the same time, even a club owner who wants to provide a great experience is faced with problems most restaurateurs don’t have. A regular eatery can accept reservations over the course of an evening so the kitchen and servers are never slammed, while at a club the entire audience will want to eat at the same time. That means complex preparations that require multiple steps are out, and they’re going to think very hard about items that deteriorate rapidly as soon as they leave the fryer or sauté pan. It’s safest to have a limited menu of things that can be made in advance, like roasts, stews, and pastas with premade sauce. As for specials, they aren’t needed, because the nightclub crowd doesn’t come often enough to notice that the menu never changes.

The Comedy and Magic Club has to deal with all of those constraints, yet has an unexpectedly ambitious attitude toward their food service. They serve up to 350 meals a night, yet the menu is as large and varied as many conventional restaurants around town. They not only offer specials, they change them frequently. On the night we were there these included beer battered fish and chips, an item that can’t be made in advance without the quality suffering grievously. A glance at the menu shows that the only other items that spend time in the fryer are the French fries and egg rolls, so that particular station in the kitchen probably isn’t too slammed.

We dined in the “Live at the Lounge” space, which is smaller than the main room but still accommodates 100 people. Shows in this space start early so that the kitchen can get all service out of the way before the main room gets busy. We found ourselves ordering at 5 p.m.,  a time that I’m usually thinking about thinking about what to have for dinner. Our server Peter was brisk but polite and helpful, answering questions fully and checking with the kitchen about accommodating a food allergy. He would have gotten high marks as a server in a standard establishment, and for a venue he was extraordinary.

The menu has one confusing statement that should be explained. It states that you have to order at least two items per show. It wasn’t immediately clear that this may be one entree and a beverage, and they might want to explain this when they reprint. As it was we decided to split a starter, have a pair of entrees, and split a dessert, which turned out to be the right amount of food, anyway.

It had been a roasting hot day and a salad sounded divine, so we ordered a Southwest grilled shrimp Caesar salad. It was almost completely unlike a standard Caesar, even before you get to the part about adding shrimp, because the romaine lettuce was topped with grilled corn, tomatoes, and tortilla chip strips along with the requisite parmesan cheese. There was also a wisp of a creamy chipotle-Caesar dressing, and I wished for more because what I could taste of it was a good complement to both the greens and the spicy grilled shrimp. I might have flagged Peter down to get more but he was answering an endless stream of questions at another table and I decided to have pity on him.

To accompany the salad my wife and I decided on glasses of white wine, a Spanish Albariño and a Cotes du Rhone from France. The selection here is good and quite fairly priced, and unlike most clubs they don’t hard sell the drinks. Owner Mike Lacey is well known for disliking excessive booze consumption at clubs, so alcohol is treated as an amenity here rather than an integral part of the experience. 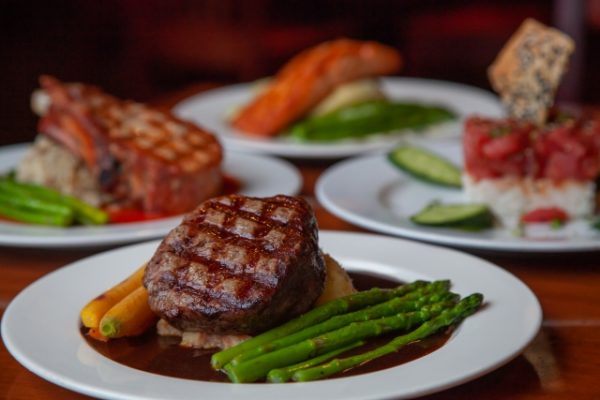 For dinner I had a bowl of chicken and lemongrass dumplings in ginger broth with vegetables, while my wife tried the fish and chips. Unusually, the ‘chips’ could either be house-made potato chips or French fries, and she chose the former. They were warm and shatteringly crisp, while the fish arrived too hot to eat with a crunchy batter. How this was achieved given the logistical challenges I find hard to imagine, but it was.

The chicken dumplings also arrived very hot, so much so that I had to wait for a while for them to cool. While I did so I ordered a mai tai from the bar, and the tiki classic arrived at just about the time the soup was edible. The strong and not overly sweet rum drink was a very good match for the Asian broth and the bok choy, grilled mushrooms, green onions, and snow peas therein. The dumplings themselves were large enough to be two bites each and there were plenty of them, so after dinner we really didn’t need dessert.

We had however already ordered the deep fried apple tart and it was well worth the calories. I had almost asked them to hold the caramel sauce but was glad I didn’t, since it was moderately drizzled and helped balance the slightly tart apples. Along with the generous dollop of vanilla bean ice cream it was a fine finish to the meal.

Our meal for two with two wines and a cocktail ran almost exactly $100, which is not out of line with other restaurants in the area. As dinner was ending the show was starting, and it wasn’t until later that I marveled at how the staff at the Comedy and Magic Club had managed to deliver food that good as fast as they did without rushing us or ever seeming rushed. I suspect that the fact that they have been in business for 40 years has a lot to do with it, but there’s more than just a highly disciplined staff at work here. The management obviously wants to make the experience memorable even before the curtain goes up, and that makes all the difference.

The Comedy and Magic Club is at 1018 Hermosa Avenue, Hermosa Beach. The same menu is served in the Live at the Lounge showroom. Opening times depend on shows. Full bar, wheelchair access good, limited parking upstairs or street parking. (310) 372-1193. Menu and show schedule at comedyandmagicclub.com. B