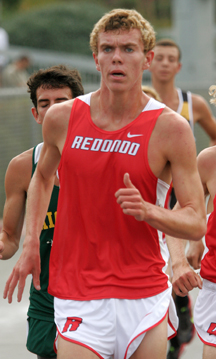 Redondo’s Evan Malone-White qualified for the CIF State Track and Field Championships by running a personal best in the 1,600 meter race. Photo by Ray Vidal

Despite finishing third in the 1,600 at the CIF Southern Section Championships, Redondo distance runner Evan Malone-White’s time was only good enough to qualify him as an alternate at Friday’s CIF Masters Meet at Cerritos College.

But the cross country standout made the most of his opportunity, running a personal best to place fifth with a time of 4 minutes, 12.12 seconds and advance to the CIF State Championships on Friday and Saturday at Veterans Memorial Stadium at Buchanan High School in Clovis.

After winning the CIF Southern Section Division 2 championship in the boys 800 with a time of 1 minute, 54.30 seconds, Redondo’s Dustin Herold will not advance to the State Championships due to an 11th-place finish with a time of 1:55.88.