The Manhattan Beach City Council continues to grapple with a conundrum as it tries to address the city’s homeless population.

The council has been interested in Redondo Beach’s innovative “homeless court” program, which. since it’s implementation late last year. has worked with 50 people among its homeless population of 176, and helped 15 people avoid criminal prosecution, and instead transition into homes, with another 20 currently in process. Redondo Beach City Attorney Mike Webb, who launched the program, has signalled a willingness to allow Manhattan Beach to utilize it, but that may come with aa condition —  that the City also must Redondo’s City Prosecutor’s office for all misdemeanor and juvenile crimes.

This would seem to solve another problem for Manhattan Beach. The City, at no cost, currently utilizes the Los Angeles County District Attorney’s office for its prosecution services. But District Attorney George Gascón, shortly after taking office last December, issued a directive indicating a broad array of misdemeanor cases would be declined or dropped before arraignment — including trespassing, disturbing the peace, criminal threats, loitering, drug and paraphernalia possession, and public intoxication. A Manhattan Beach Police Department analysis found that 61 of its 154 misdemeanor cases filed this year have been dismissed, and 701 cases in 2019, and 2020 would not have been filed under such a directive. Fifty-nine people believed to be homeless have been cited with criminal charges since last July in Manhattan Beach.

The City Council issued a vote of no confidence in Gascon earlier this year due to his prosecution policy. Mayor Suzanne Hadley reiterated that lack of confidence at the July 20 council meeting and linked it to the City’s challenges with homelessness.

“Our residents are fed up,” Hadley said. “I mean, I’m fed up with the county… People move to the South Bay for local control. They want local fire, local police, local public schools, and they want control over their lives. And I do think when you have a district attorney who, within hours of starting the job, is saying what he’s not going to do, and yet talks about restorative justice. I don’t think it is restorative justice to just ignore these people, or let them be unhoused and let them be criminally negligent.” 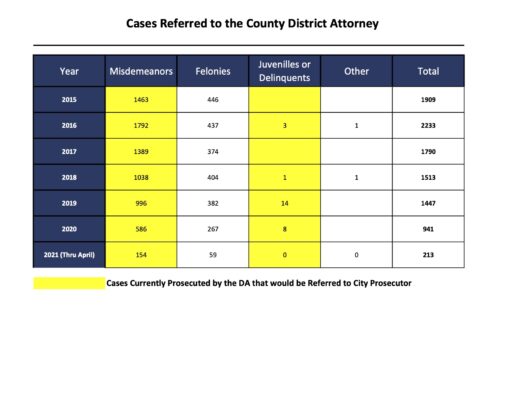 Graph by City of Manhattan Beach

The Council in June directed staff to explore using Redondo Beach’s services. At its July 20 meeting, George Gabriel, assistant to the city manager, reported that Redondo had not yet provided a cost estimate or confirmed what exactly its prosecution services would entail. He did report, however, that Hermosa Beach contract’s Redondo’s prosecutorial services —  but not its homeless court —  for $200,000 a year.

Councilperson Steve Napolitano estimated, given Manhattan Beach is nearly twice as large as Hermosa and would also be using the homeless court, that the cost would be in the neighborhood of $400,000 annually. Napolitano noted that the City’s current efforts to address homelessness, which has focused on outreach and counseling, and has been largely paid for with LA County’s Measure H funds earmarked for such efforts, have been successful.

“Manhattan Beach went from 41 homeless in 2018 to 15 homeless in 2020 without paying for prosecution services or homeless court,” Napolitano said. “So how does this add up? It will cost Manhattan Beach about $400,000 more to deal with the actions of 15 individuals, after we reduced our homeless population by 26, without having to spend anything close to that. If you go by the seven people [MBPD] identified as those who would benefit from homeless court, that would be $57,000 per person.”

Napolitano also argued that the City has no assurance that Redondo would be better able to prosecute on Manhattan Beach’s behalf than LA County.

“I cannot see the dollars or sense in joining with Redondo for prosecution services,” he said. “It’s a pie in the sky shiny thing that we have no idea whether it’s going to be worth the cost or whether they’re going to follow through prosecution, or even if they do prosecute, whether those folks are actually going to serve any time or face any consequences for their actions And for that, I would say it’s not worth the money.”

Councilperson Richard Montgomery said that the City should wait and see what Redondo’s cost will be and whether or not Measure H funds might be applicable.

“The point here is that the residents are demanding the council take the steps on our own,” Montgomery said. “Our residents demand our police do the right thing —  enforcement, for ourselves. Redondo gives an option to us, we should do the right thing and look at what those costs will be.”

Councilperson Joe Franklin noted that recent police actions evicting homeless in Echo Park Lake and Venice, along with the uptick in homelessness that occurs each summer, could bring more homeless people to Manhattan Beach unless more action was taken.

“They’ve got to learn the consequences, that they can’t be in public places doing these things, period,” Franklin said. “And so we’ve got to give the tools to our police and we’ve got to find a way to prosecute….Let’s just keep this ball going forward with Redondo Beach.”

“Everyone’s going to say do something,” Napolitano said. “But it’s our job to do the right thing, and to do it at the right price.”

Councilperson Hildy Stern noted that Supervisor Janice Hahn has expressed support for making Measure H funds eligible for homeless court and that Hermosa and Torrance are also signalling interest in joining the effort.

“I would therefore suggest that we continue to look into that, and we look at whether there are opportunities to have a more regional or at least a sub-regional opportunity to develop a similar homeless court,” Stern said, adding that conversations should continue both with the county and Redondo. “We hear all of the successes, and we hear that our residents are very interested in doing this. We know that there are individuals that are living unsheltered in Manhattan Beach who would really benefit from this process of obtaining the full services that will help them break out of the cycle of homelessness and into a more stable housing situation. That’s something that we should be supporting, and we should be investigating in any way that we can.”

The council directed staff to apply for Measure H funds by August 10 to be directly applied to homeless court and to continue engaging with Redondo Beach regarding both homeless court prosecutorial services. ER