The Kettle celebrates 40 years as a Manhattan Beach mainstay 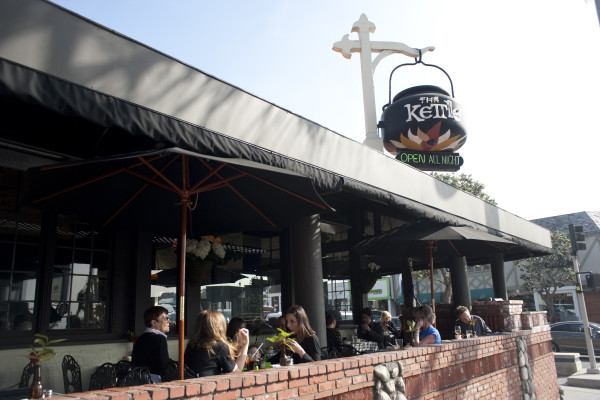 The Kettle will celebrate its 40th year anniversary with 25 cent coffee and free muffins on Jan. 17. Photo by Chelsea Schreiber

Many great family businesses started humbly. It would have been impossible to look at the first Walton’s Variety Store and see the seeds of a Wal-Mart, or the first McDonald Brothers hamburger joint and envision eateries spanning the globe and generating millions.

The Kettle, which spawned a family of restaurants in the South Bay and beyond, turned 40 years old in December. Its owner, the Simms family is the most active dynasty of restaurateurs in the South Bay. Since opening the Kettle in 1973, the Simms’ family of restaurants has grown to include the Mimi’s and Lazy Dog Café chains, plus local favorites Tin Roof Bistro and Simmzy’s. The restaurant that is the foundation for the family’s empire has an unrivalled Manhattan Beach heritage. Only the Shellback Tavern and Ercoles, both primarily bars, have been open longer locally.

Second-generation restaurateur Scott Simms tells the story of how his father got into the business, and how the family carried on from there.

“My father A.J. Simms moved here for work in the 1940s. He ran the commissary for MGM Studios and then bought the Ben Franks restaurant at 8th and Western in Los Angeles. He built two more in Hollywood before coming to Manhattan Beach. A business partner of my dad’s, Wally Botello, built The Kettle. It had previously been an Atlantic Richmond gas station. Wally opened The Kettle in ‘73 and owned it until ’76, when he moved to Rancho Mirage to open Wally’s Desert Turtle. I worked at The Kettle when he owned it, and my family bought it when he left. My brothers Tom, Greg, and I were all educated for different professions. But after we finished our schooling, we all went into the restaurant business with Pop. My father stayed in the business, sometimes working 100 hours a week. He died in October of 2000; he lived a full life, no tread left on the tires.”

Manhattan Beach was a quiet town then and The Kettle was the first round-the-clock place in town. Night owls took to the place quickly, attracted by a standard of food and service chain coffee shops couldn’t touch. As years rolled by the management changed menu items to keep up with dining trends, but some longtime customers kept ordering items from the original menus, and the restaurant kept making them. The result is that on any day, a server may deliver something to the adjoining table that you’ve never seen before.

“The secret off-menu is at least the same size as the printed one,” said Sarah Simms, granddaughter of A.J.  Simms and now the restaurant’s food and beverage director.  “There’s a sandwich called the open hearth – shaved ham, cheese, homemade Thousand Island dressing, on grilled sourdough. There’s the hog’s breath salad, walnuts, romaine, grated cheddar cheese, sweet and sour dressing – we took it off 20 years ago but people still order it.”

This is entirely within the original intention at The Kettle. At the very top left corner of the menu, it reads, “Satisfaction Guaranteed – our menu is only a guide, feel free to be creative. If the ingredients are here, we’ll make it for you.” 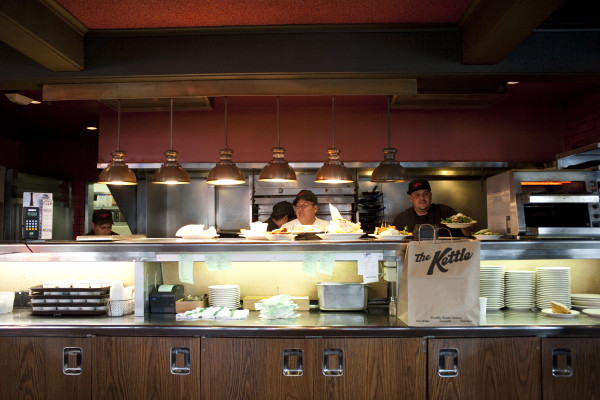 Cecelio Viellegas has worked as a chef at The Kettle for three decades and is one of several long-tenured employees. Photo by Chelsea Schreiber

The restaurant has managed the difficult trick of offering a sense of nostalgia that can only accrue in a longstanding local institution while remaining vibrant. Despite the lingering recession, 2013 was The Kettle’s highest grossing year.

“We’ve kept pace with the evolution of food in California,” explained Scott.

“Kale, for instance,” offered Sarah. “It was never on our menu, but it’s now in our number one selling salad. Turkey bacon – people want things that are leaner, less calories.”

“They want fewer calories right up to the moment they order a sundae to follow the salad,” Scott observed with a smile.

Having a menu with something for everybody, health nuts and hedonists alike, suited an area that became increasingly sophisticated in the decades after the restaurant opened.

“At 1:45 a.m., we see everybody in Manhattan Beach who has been told they need to leave a bar but they don’t want to go home. We sell lots of eggs, coffee, and desserts right about then. I have story after story of things that have happened here late at night…  the antics of the late-night crowd have been bizarre.”

There are other consequences of running a restaurant through late night hours, Scott noted.

“There have been six or seven marriages between members of our late-night staff and members of the police department. When the cops get done at three or four o’clock in the morning they come here and talk with the waitresses. At six she’s off shift and he walks her home, and things blossom,” Scott said.

Generations of students have also come to The Kettle to hang out after class or on trips to the beach. Many of them got their first jobs as servers or busboys at The Kettle. The Kettle has long been a major donor to Mira Costa, the annual holiday fireworks show and local charities.

The Kettle, as befitting its location at the very center of town, at the intersection of Highland and Manhattan Beach, is many different things to many different people. Families have made a tradition of breakfast at The Kettle after church. Local business and political leaders use its booths for business meetings, while many a Mira Costa grad who has since gone far afield considers its French Onion soup the taste of home.

Part of the reason for the sense of continuity at the restaurant is that employee turnover is very low. In an industry where yearly turnover can veer toward 100 percent, the Kettle prides itself on less than 30 percent. Many employees have stayed decades and served multiple generations of customers. On a recent visit, a grandmother, her daughter, and granddaughter sat down at a table not far from Scott Simms, who recognized the grandmother from when she worked in the restaurant.

“A third of the staff has been here more than 20 years,” Simms said.  “People who left town decades ago come back to visit. There are kids who grew up here, worked here, and bring their kids here now. We’re a community place, a multi-generational gathering place.”

There have also been many celebrity sightings. Joe Montana wrote in his autobiography that he was sitting in The Kettle when he got the call to join the San Francisco 49ers. James Blackman, who went on to found the award-winning Civic Light Opera, worked as a waiter and was known to break into song when he wasn’t busy serving. His flamboyancy was tolerated because he was also a memorably good server, even among an elite staff. 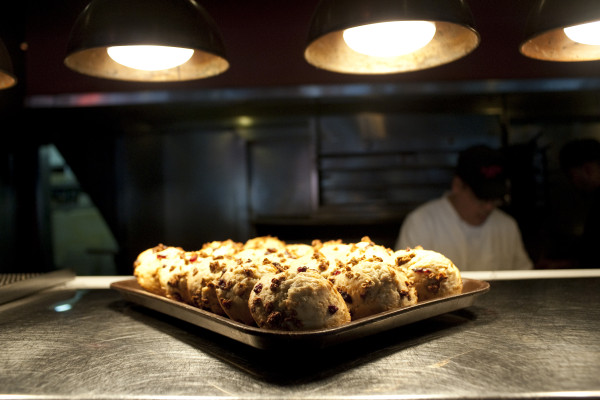 The Kettle will serve its famous muffins free of charge as it celebrates 40 years on Jan. 17. Photo by Chelsea Schreiber

The Kettle is famous for its high standards of service. Coffee and water are cheerfully refilled even when the place is slammed with a dinner rush or Sunday brunch.

Though ownership, service, and many of the staff have remained the same, The Kettle doesn’t look much like it used to, thanks to several small remodels and one stressful, big one.

“In the early ‘80s, when we had people leaving many nights because the wait was too long, there used to be this planter full of juniper bushes all around the building,” Scott recalled. “It was 10 feet wide, and I figured that if we remodeled it we could add 45 seats to the 109 we had inside. The project went over-budget by about 40 percent and I couldn’t sleep for days worrying about it. On the night it opened, in March 1981, I sat on the fire hydrant across the street just saying to myself, somebody please sit down there. It filled up and the volume of the restaurant soon doubled.”

Whether they remember the days of the juniper garden or not, customers are invited to celebrate four decades of the Kettle on January 17. Muffins will be free and coffee 25 cents, the same price as the day The Kettle opened.

Customers will be encouraged to record their Kettle memories in the guestbook. They may need more than one, because a lot of people have made memories there over 40 years.