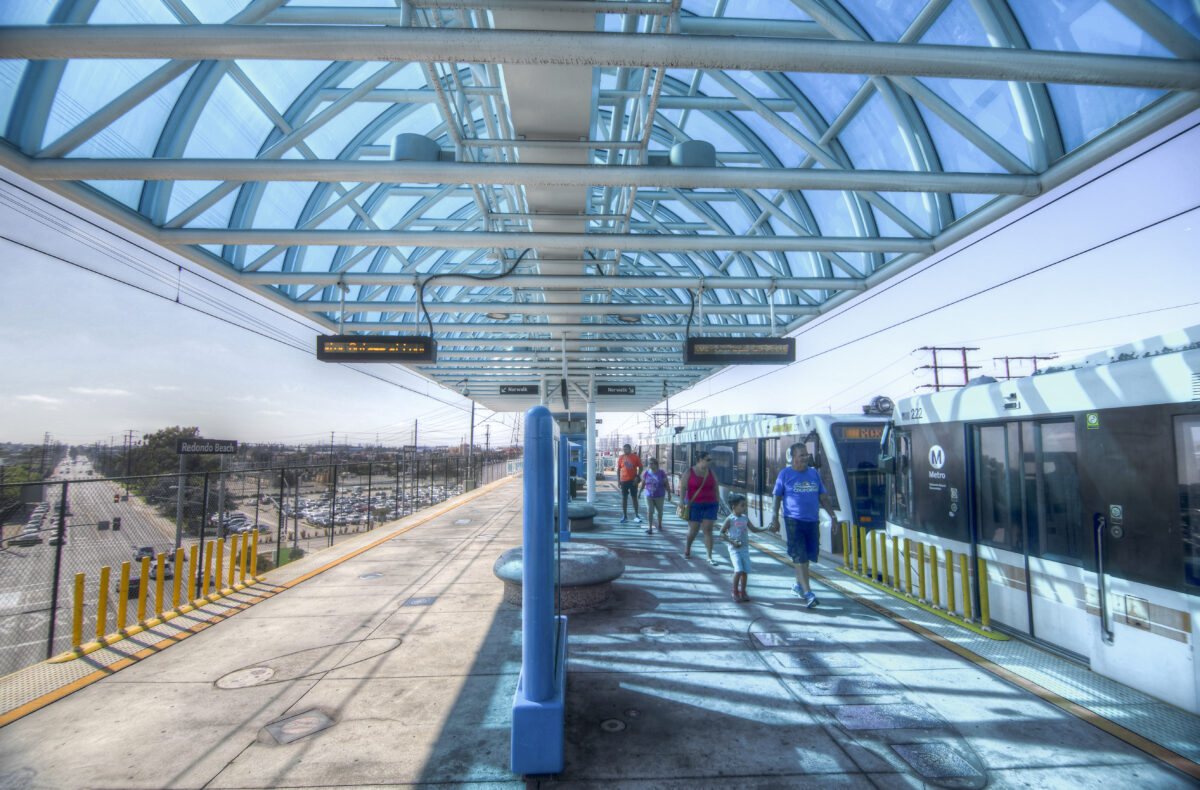 Passengers board the Metro Green Line at the Marine Redondo Beach station. Photo

Passengers board the Metro Green Line at the Marine Redondo Beach station. Photo

Under a proposal that will come before the Metro Board Thursday, the Metro Green line could get shorter, a decision that would impose a second transfer and potentially added time for South Bay riders heading to downtown Los Angeles.

Thursday Metro Board of Directors meeting includes an item with a service plan for linking the existing Green Line and the Crenshaw Line, which will open in fall 2019. The two lines will intersect near the Los Angeles International Airport, and the flow of trains in multiple directions prompted Metro to reconsider what the service will look like in the future.

The Crenshaw Line is projected to terminate between the existing Mariposa and Aviation Green Line stations at a new station, tentatively named Century/Aviation. (A future station at 96th Street, which would link rail passengers to the airport via a people mover, is scheduled to open in 2023.) As recently as last month, Metro officials said they were unsure what the connection would look like.

Then last week, a Metro staff report debuted two possible options: one would link the Crenshaw line with the portion of the existing Green Line west of Aviation, providing for a potential “one-seat ride” from Redondo Beach to the Crenshaw Line’s northern terminus at the Expo Line, which runs from downtown Los Angeles to Santa Monica; and another which would link the Crenshaw line directly with the portion of the Green Line east of the Aviation station, creating a one-seat ride between Norwalk and the Expo/Crenshaw station. Under either alternative, the segment of the Green Line not directly connected to the Crenshaw Line would end at the Century/Aviation Station. Passengers would have to get off and transfer to complete the current route of the Green Line, and would also face about six minutes of “double back” travel.

Metro staff presented the alternative linking the Crenshaw line to the Norwalk segment as the preferred alternative, which would have created a Green Line of only five stops from Redondo to Century/Aviation. This service plan was to be approved administratively, without the need for an affirmative vote from Metro’s governing board, or public hearings.

This has drawn protests from South Bay residents and elected officials, who said the plan disadvantaged its riders and gave insufficient opportunity for them to provide input. Among them is Los Angeles County Supervisor Janice Hahn, whose District 4 includes the South Bay. Like each of the five county supervisors, Hahn is a voting Metro Board member. She said she plans on Thursday to ask for the rail service plans to be subject to community meetings, and for examination of additional alternatives.

“I am upset with what Metro staff has proposed. I don’t think Metro staff should be making a decision like this that has long term impacts on South Bay riders. I am asking them to go back to the drawing board and bring back a plan that benefits riders from both ends of the Green Line,” Hahn said.

Metro staff said that the board can do what it pleases in terms of selecting a service plan, but defended the initial plan to approve the Green Line and Crenshaw Line link administratively, instead of subjecting it to community meetings. Conan Cheung, senior executive officer for service development with Metro, said the transportation authority has set criteria defining a “major service change” that would require public hearings. The proposal for the Green and Crenshaw lines, he said, did not meet those criteria.

This explanation did not satisfy the South Bay Cities Council of Governments, who expressed their frustration in a letter to the Metro Board. Kurt Weideman, the COG chair, wrote that, like others, the group only learned of the plan when it was announced last week, and that its board would not be meeting to discuss the item until Thursday evening — after Metro’s board meeting.

“We’re asking them to do more outreach and analysis of alternatives, rather than just announcing ‘This is how we’re going to operate the train,’” Steve Lantz, transportation director for the COG, said in an interview.

A rendering of two proposed alternatives for the connection between the Green Line and the Crenshaw Line, scheduled for completion in fall 2019. Alternative 1, which is shown on the left and would shorten the Green Line while adding transfers for South Bay riders, is Metro staff’s preferred plan. Image courtesy LA Metro

Part of the concern from South Bay cities is that Metro staff’s preferred alternative would diminish ridership from their residents. Hermosa Beach City Councilmember Hany Fangary wrote a letter to Metro CEO Phil Washington stating that this would make it harder for the city to achieve its General Plan objective of joining a sustainable transportation network for the region.

Fangary was one of several to question the methodology by which Metro staff arrived at their preference. Although there are far more daily train boardings at stations between Norwalk and Aviation than there are between Redondo and Aviation, it’s not clear that all of these riders would be bound for the Crenshaw Line, because many of them transfer to north-south lines prior to the Aviation station, such as the popular Silver Line bus at the Harbor Freeway station.

Metro staff said that the Norwalk branch is preferable even taking this into account.

“As far as current ridership is concerned, Mariposa to Redondo Beach, currently they’re destinations, not origins. There are very few people who get on there in the morning  and go eastbound,” Cheung said.

Cheung acknowledged that this could change as Metro expands the Green Line to the south, and Metro staff did recommend reconsidering the rail service plan one year before the opening Green Line reaches Torrance. This is expected to take place in 2030.

For South Bay riders, the prospect of added transfers and lengthier trips is discouraging. Dan Myers is a retired Hermosa resident who takes the Green Line downtown for museum exhibits and events. He said he was sympathetic to the complications involved in linking the two lines — “I was wondering how they were going to do it,” he said — but he would prefer a direct link from Redondo to the Expo Line. And waiting until the Torrance extension is not ideal.

Another alternative, which Hahn plans to ask Metro to explore at Thursday’s meeting, would eliminate the need for added transfers by routing different trains past the same platform. For example, a passenger at the Redondo station could take a train either toward Norwalk, on the current Green Line route, or toward the Expo/Crenshaw station. This would be accomplished by having a “switch” at the Century/Aviation station, something backers said it is designed to do.

But Metro staff cautioned that having multiple train lines coming and going through the same station would make it more challenging to boost the frequency of Crenshaw line trains. The switch arrangement also puts added strain on rail infrastructure. Relying on one station multiplies the impact of delays, and a similar setup shared by the Blue Line and Expo Line in downtown Los Angeles is frequently in need of maintenance.

“We can give it to them, but it’s not a preferred way to operate,” said Jim Gallagher, Metro’s chief operations officer.