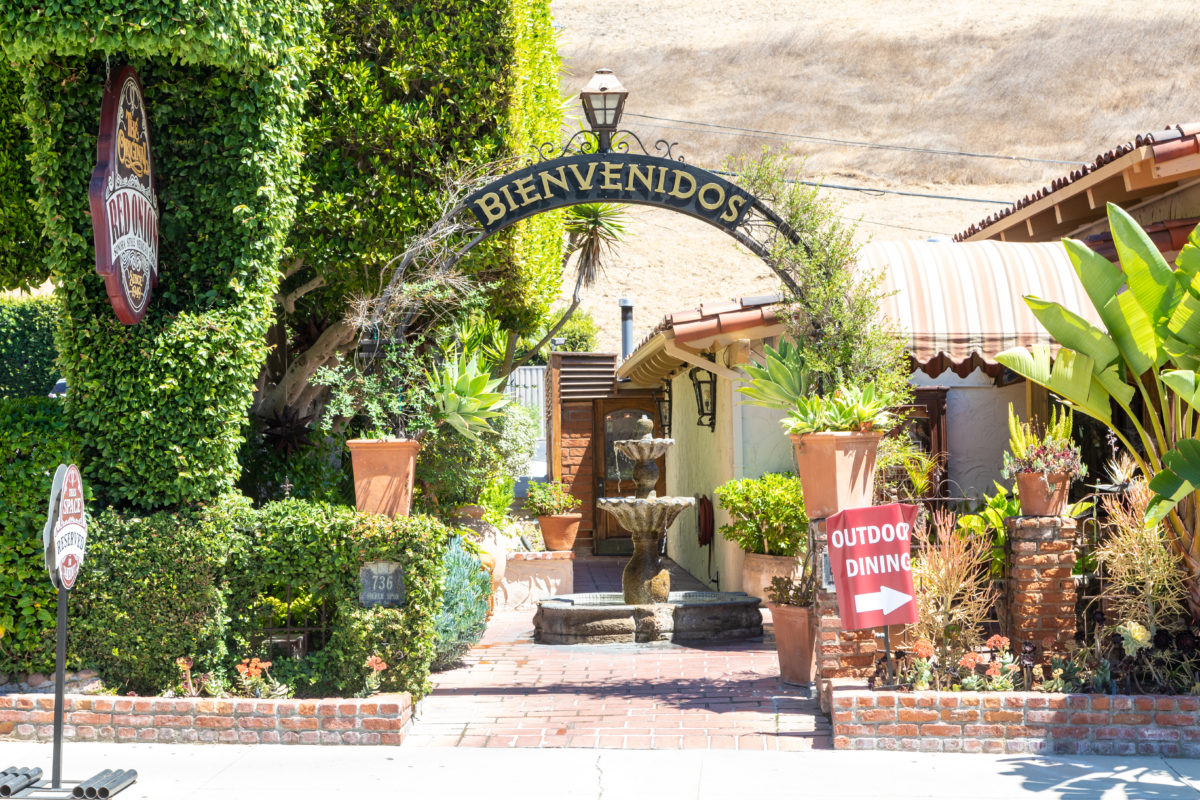 The entrance is inviting, but for now inside dining is now allowed. Photo by JP Cordero

One hundred and ten years ago, railroad magnate Henry Huntington cashed in on a craze inspired by a melodramatic novel. Helen Hunt Jackson’s “Ramona” was set in Spanish California, and it set off a craze for tamales, enchiladas, and other Mexican dishes. The story inspired Huntington to open Casa Verdugo, which set the standard for dining in white walled, high-ceilinged rancho splendor. A Mexican dance troupe and children’s choir performed regularly, and the courtyard was stocked with pampered farm animals and chickens that did not fear the cookpot.

The people who opened the first Red Onion Inglewood in 1949 didn’t have such a grand vision. The Inglewood location had just 15 seats, but by the time they opened in the South Bay their restaurants followed Hunintington’s fantasy model (minus the live chickens). I had my first encounter with one of their vast tostadas when my parents took me to the Red Onion  in Manhattan Beach when I was probably 10 years old. The appearance of the place was part of the attraction, a bright, airy space that put humbler establishments nearby in the shade.

That location and its palatial sibling in Redondo closed long ago, leaving the Rolling Hills Estates Original Red Onion the only remaining outpost of that chain is still owned by the founding family. It carries on with the same style, or rather, with as much of that style as they can approximate while serving in their parking lot, which they and everybody else have to do these days. Right now, you only see the lovely tiled interior if you happen to make a trip to the restroom.

The menu at the Red Onion in Palos Verdes has not entirely stayed still in the same way as the decor, because I certainly don’t remember having sopes and gorditas as an inquisitive teenager. These flirtations with modernity aside, most people seem to be ordering old-school combination plates, carne Ortega, and those tostadas that still look like dinner for at least two people. On the Sunday afternoon when we visited the crowd skewed to the older side, and any table that didn’t have at least two margaritas and one burrito looked out of place.

Everything starts with very thin, crisp chips and fresh salsa with a zippy chili pepper and cilantro kick. It was a good start to a meal that had its moments but was curiously uneven. The first appetizer was mysteriously bad, which was strange because it’s one of the easiest things to come out of any Mexican kitchen. It was cheese and chips with guacamole that I ordered mainly to try the guac, which was good. However, they had taken a mound of chips with a lot of cheese grated over the top and broiled it. That means the chips on the top are covered with cheese and everything below has none, but is drenched with the oil that renders out when it is broiled. It’s better to put down a layer of chips, then a layer of cheese, then repeat. 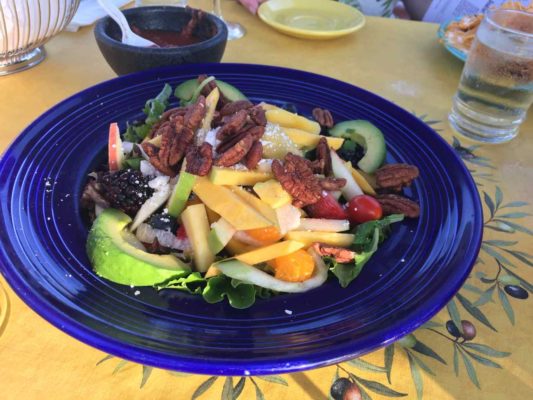 One of the more innovative items on the menu is the colorful Red Onion salad, a harmonious blend of fruit, vegetables, nuts, and cheese.

As we were surveying this disappointedly, the first really good item came out. I had ordered the Red Onion salad because when an establishment puts their name on something, they probably think it’s one of their best items. It was. The mix of greens with jicama, tangerine, avocado, pecans, berries, cucumber, and feta was perfect. It was a triumph at pairing flavors and textures, and pretty too. They had put the rather sweet raspberry vinaigrette on the side, which was appreciated because the merest spritz of it helped tie everything together.

We also had cups of albondigas and tortilla soup, which were included with our entrees. The albondigas was fine when considered as a vegetable beef soup, but what gives albondigas its character is the savory blend of spices in the background. This tasted mainly of bell pepper and tomato with only a hint of the cumin, chile, garlic, and oregano that are usually prominent in the mix. The chicken tortilla soup was much better, with citrusy, herbal tomatillo and green chile pepper flavor that balanced the richness of the broth.

For mains we chose chicken mole, chile con carne, a carnitas platter, and a carnitas burrito. Both items with carnitas were decent, the meat tender and moist, fine for those who like carnitas that is simply chopped roast pork. There are variations all over Mexico, some of which are more richly seasoned, and which emphasize textures so chewy that they’re almost a soft jerky. I prefer more textured versions and higher seasoning, but can relish simple pleasures. It was fine in the deluxe burrito, because the good ranchera sauce and cheese added variety. It’s a hefty meal for thirteen bucks, and a good one.

The other two meats suffered by comparison because we ordered items that are characterized by bold, rich flavors, and both were bland. The mole sauce was sweet with barely a hint of heat, and the red chile sauce had little of the smoky chile flavor that is its signature. In discussing this with my companions, we think it’s quite possible that these were made according to the recipes used in the 1960s, deliberately timid because that’s what Americans wanted then. Once a restaurant has a loyal clientele for this style, it may be difficult to get more edgy and modern for fear of alienating the base that keeps the place in business.

The sides were hit and miss as well — good Spanish rice, with a lot of tomato so it was almost a stew, good Mexican zucchini sautéed with onions and tomato and topped with cotija, but potatoes with bell pepper and onion that had the texture of something cooked long in advance and kept on a warmer.

We tried three cocktails, a gold Cadillac margarita, mezcal negroni, and a “blanco royal.” These were shaken tableside, a good tactic that relieves servers from balancing very full glasses on a long walk. Unfortunately, what was in those shakers was not particularly good. A negroni that had pineapple juice instead of vermouth made me appreciate the wisdom of the original recipe, because this was out of balance even before someone decided to serve it with a salt rim. The blanco royal sounded interesting — tequila with Grand Marnier, elderflower liqueur, lime juice, and agave, but the dominant flavors were the lime and agave. The margarita was the best of the three, but didn’t have the flavor of freshly squeezed fruit. Perhaps we caught the bartender on a bad day.

We had been interested in dessert when we saw sopapillas and fresh churros on the menu, but changed our order when we found that their version of sopapillas involved deep-frying a flour tortilla and topping it with cinnamon and sugar. The real thing is rather different, so we decided on churros and deep-fried ice cream. The churros were advertised as being served with caramel and Mexican chocolate, which led us to expect two dipping sauces so we could select the one we wanted. Instead we received a sparse drizzle of sweet chocolate on the plate and a large pot of caramel. Bittersweet chocolate is a much better complement to the sugary flavor, and is generally provided in Spain and Mexico. The churros themselves were fresh fried, which we appreciated because some places reheat theirs, but the chocolate was more decorative than useful, the caramel overwhelmingly sweet.

The deep-fried ice cream was a pretty presentation, nestled in a flour tortilla sprinkled with cinnamon and sugar and drizzled with more of the sweet chocolate, and topped with whipped cream, chocolate, and more cinnamon. Unfortunately, the dough on the outside of the ice cream wasn’t crisp, and like the churros it was overly sweet. It might have been a good complement to a shot of espresso, but it needed something for balance.

Dinner for four with one cocktail each and two glasses of wine ran $167, on the high side for upscale Mexican food in the South Bay. It was an interesting experience, a reminder of how modern Mexican food is different from the 1960s. Some will enjoy it as a nostalgia trip, some will pine for brighter and spicier flavors. I’m in the second category.