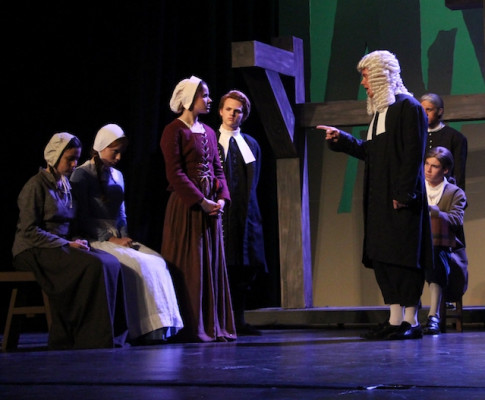 With Halloween upon us, there are many people dressing up as witches, but the majority of people do not know the origin of these creatures. To shine light on the rich history of witches and their back story, the Mira Costa High Drama Department invites us to their production of “The Crucible.”

“The Crucible” takes place in Salem, Massachusetts, a small town in Puritan New England. The story begins with a group of teenage girls dancing in the forest, with a slave name Tituba. While the girls are dancing, they do not notice that Reverend Parris, a local minister, is watching them. He brings them back to the town, but not before his daughter, Betty, faints. Paranoia, fear, and anger ripple through the citizens of Salem as the hunt for witches in their town reaches an all-time high. Reverend Parris, desperate to save his daughter and to find answers, calls upon Reverend Hale, an expert on the supernatural and witchcraft, to question the girls and to discover what is going on in this quaint, little town.

Despite the fact that most of the plot is devoted to figuring out who these so-called witches are, “The Crucible” is much more than a wild goose hunt. Arthur Miller wrote the play back in 1953 as an allegory of McCarthyism, when Communist paranoia was rampant and the United States government was infamously interrogating alleged communists. Miller was among those questioned, and was convicted of “contempt of Congress” when he refused to give the names of those who attended secret meetings with him.

Viewers might wonder how a play written in the mid-20th century could be relevant today, given the fact that there are other staged productions more suitable to the young generation. According to Carol Mathews, the co-director of the play, “The Crucible” was not chosen at random, and she believes that students and audience members alike will benefit from this classic production.

“Mira Costa Drama stages two productions each year,” she says, “one in the fall and one in the spring. We tend to look at show choices in four-year cycles to give our students a wide, varied exposure to genres, eras and playwrights over the course of their time in high school. This year, a classic literary play was chosen to give our students historical perspective but also to challenge them to think about how these themes are relevant in today’s world.”

There are few works of literature that can be deemed as “timeless” in a sense that its themes, revelations, and lessons can be recycled and circulated throughout the generations, and Mathews agrees that “The Crucible” is one of those works.

“This play is extraordinarily timeless literature,” she notes. “Today, it continues to speak to us about the dangers of fear and intolerance. Even in the life of a high school student, one can think about peer pressure and the challenges of standing up for what you believe in.”

In addition to being elated to have parts in such a historic play, some of the student actors found it challenging to completely mold themselves into their characters. Cary Jordahl, also a co-director, elaborates on why that is:

“‘The Crucible’ is set in 1692 Salem, Massachusetts,” he explains. “The language, the time and place and the storyline, seem a million miles away from our students’ own life experiences. As directors and teachers, we had to guide our students to explore and understand their individual characters. This process began on the first day of rehearsal and continues to the final week. The material is so serious that it’s been challenging for students to consistently find the level of intensity needed to bring these characters to life. While preparation for any production requires much work and dedication, this show demanded an unusual emotional commitment.”

Julia McDermott, plays the infamous Abigail Williams in the staged production, and agrees with Jordahl that taking on this role did not come easy, but she does not regret going for it.

“The most challenging part about playing Abigail Williams is trying to portray all her different personalities,” McDermott says. “Abigail has to be very obedient when she is in front of older adults and must act innocent to cover up her misbehavior. She has to be intimidating and terrifying toward the other girls, and flirtatious and vulnerable when alone with John Proctor. I think it is important that Mira Costa is doing ‘The Crucible’ because it shows the diversity of our acting abilities. It is relevant to today’s audiences because it proves how far people will go to save their reputation.”

Similarly, Brad Halvorsen, who plays Judge Danforth, found it difficult to capture the persona of Danforth, a character so blinded by his self-proclaimed righteousness that he does not acknowledge how flawed his beliefs truly are.

“The hardest part for me has been developing a whole personality for my character,” Halvorsen says. “It’s easy to see what a character’s goals and conflicts are. The hard part is determining how that person would go about achieving those goals and dealing with those conflicts. Above all, these characters are human beings. If we don’t give them true personalities and make them human, the audience can’t relate and will lose interest.”

The ability to breathe human qualities into such rigid characters was also challenging for Paxton Wright, who plays Reverend Hale.

“The most difficult part is keeping up with my character’s state of mind,” Wright says. “Hale is constantly changing throughout the show. Every scene he shows up in, he’s just a little more broken down than the last. Having to portray this change in emotion and conscience with every scene can be brutal at times, since you still need to stay true to who he is while his gears are shifting. Hale, like every other character in the show, is not a caricature. He’s a human being and needs to be portrayed as such.”

Aside from the challenges that arise during rehearsal, the cast members agree that these difficulties were worth the price of putting on such an important play.

“This is definitely one of the more dramatic shows that Mira Costa has done in a long while,” Halvorsen points out. “I think it will be a great opportunity to showcase some of the serious acting talents that we have. The reason that this show is produced so often is because it has significance for many different audiences. Not only is it an allegory to the McCarthyism of the 1950s, its themes of mass hysteria, reputation, and intolerance play to the universal fears of modern audiences as well.”

Wright concurs that it has been a while since the school has put on such a dramatic play, and feels as if the time is right for “The Crucible” to take center stage.

“I think one reason the show is so important,” he says, “is that Costa hasn’t done a truly tragic play since ‘The Elephant Man’ in 2008. And this show is a great opportunity for Mira Costa’s drama department to show off the genuine acting chops of its students. I also think the play is relevant to modern audiences because we are living in a period of time similar to the one portrayed in the show, living in post-9/11 America wherein the country has been overly stricken with paranoia of a terrorist threat. We live in a world where everyday, normal Americans can be labeled as ‘suspected terrorists,’ and I think this play speaks to those fears.”

Wisdom of the elders

In order to reach out and teach the audience valuable lessons embedded in the production, the cast members themselves had a lot to learn before they could be the ones to do the teaching. Matt Sena, who plays John Proctor, a character who constantly battles between doing the right thing and keeping his reputation intact, is thankful for the help that he received from his teachers.

“Mira Costa High School has some incredible teachers who have been generous enough to put together presentations relating ‘The Crucible’ to their subject,” he says. “Bill Fauver, a beloved Mira Costa history and government teacher, gave a presentation on the historical contexts of ‘The Crucible’ – the Salem witch trials, McCarthyism, Arthur Miller himself – and its relevance to today. English teachers Alan Zeoli and Jonathan Westerberg put together a joint lecture on the analysis of ‘The Crucible’s” themes and characters to help us deconstruct its complexities and understand their purposes.”

“The Crucible” is a world-renowned play, but most people do not understand the symbolism behind the title. To clarify the matter and to show just how much he has learned from his teachers, Sena takes a minute to explain the significance of the title.

“A crucible melts metal and separates its contents under conditions of extreme heat and pressure. It shows you what that metal is made of. This show centers around decisions being made at times of high heat and pressure. This is not only an everlasting theme, but a particularly relevant one. In the face of environmental destruction, what are we really made of? Under the threat of big-business exploitation, how hard are we willing to fight? In the path of college acceptance letters, how long will our nerves hold out?