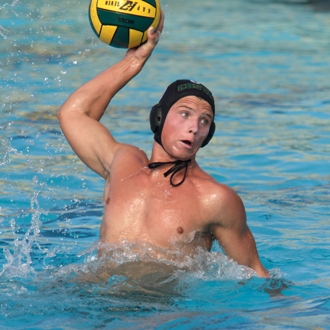 Mira Costa goalkeeper Nick Dale makes a save in the Mustang’s 11-8 win against Palos Verdes. Photo

David Feingold and Mike Mackenbach had three goals each for the Sea Kings.

Mira Costa, which won the CIF Southern Section Division 3 championship last season, has moved up to Division 2 and is ranked No. 3 in the division.

The Mustangs opened its season last Thursday with a thrilling 9-8 win over visiting San Marcos. Mustang goalkeeper Nick Dale recorded 11 saves, including one on a penalty shot to preserve the victory.

Lavinsky had four goals and Jeon and Miller-Tolt had two goals for Mira Costa which moved up four spots in the Division 2 polls.

Mira Costa continues Bay league action Thursday, Sept. 25 with a 3 p.m. game at Peninsula. The Mustangs will travel to San Diego to compete in the America’s Finest City Invitational tournament Friday and Saturday.