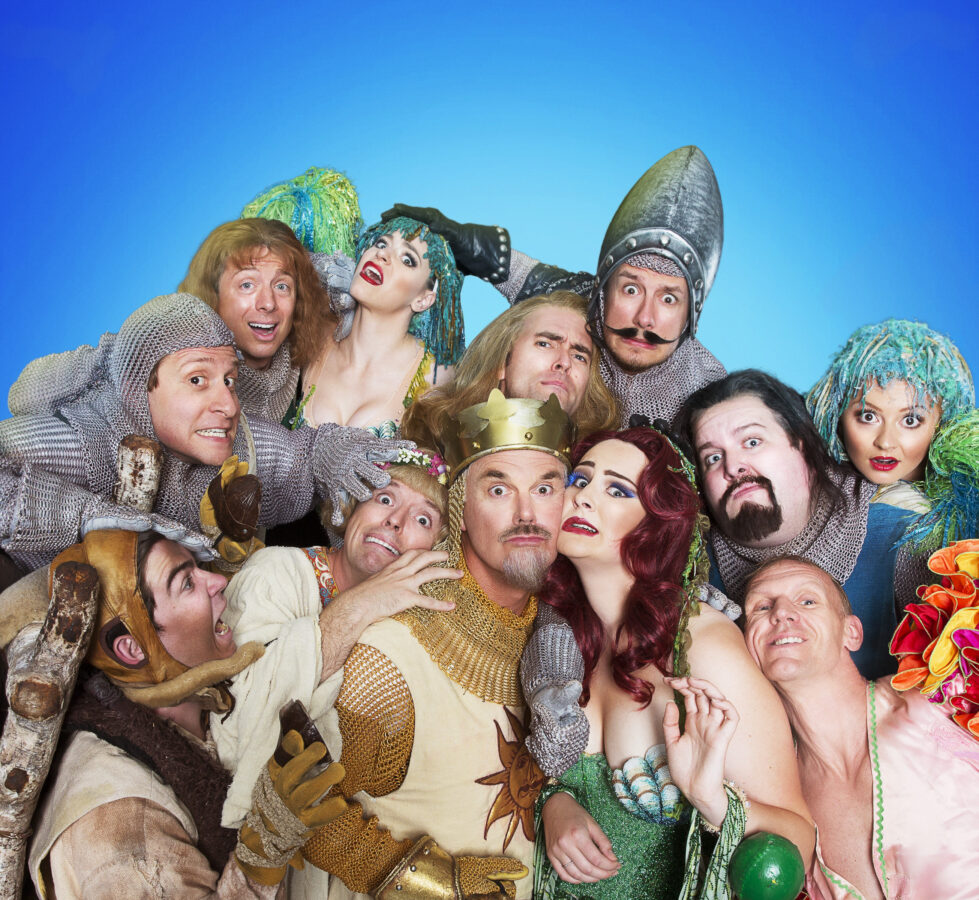 The cast of 3-D Theatricals’ “Spamalot.” Marc Ginsburg is on the left, second from the top, in silver chainmail, just below the actor with the long red hair. Credit: Shyla Marie Photography 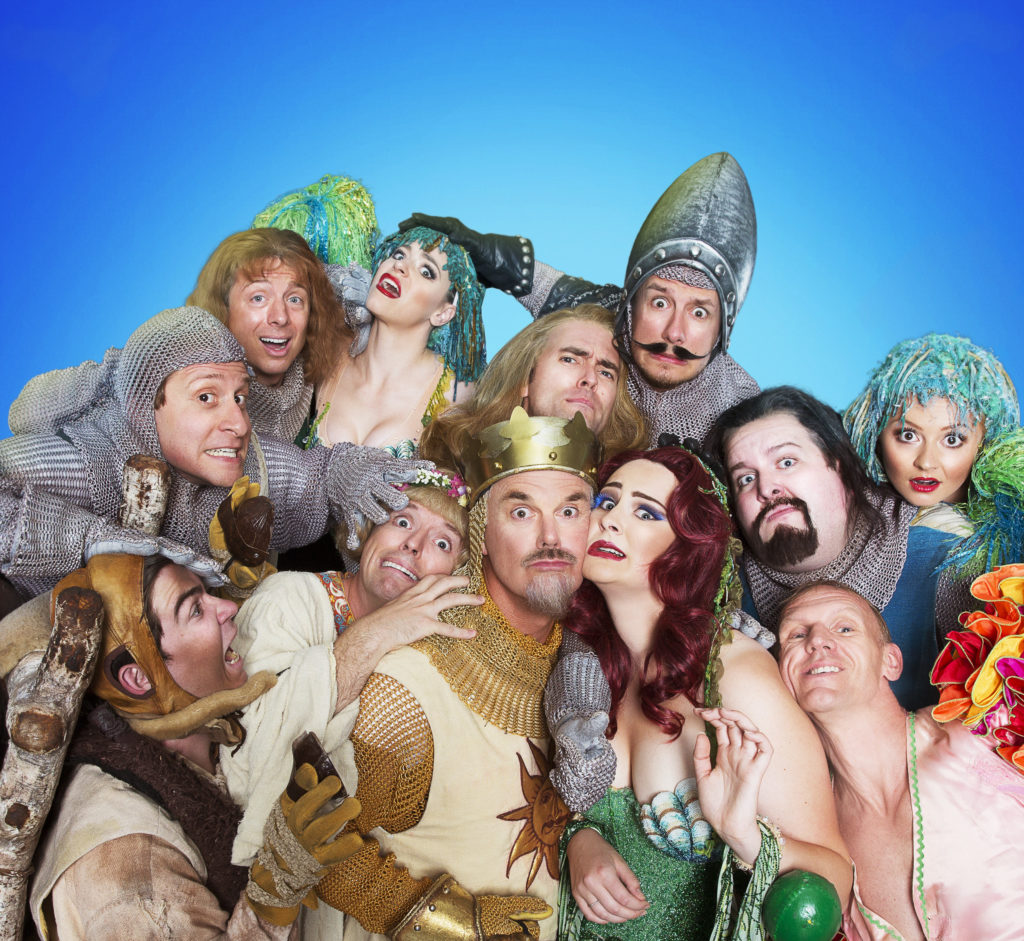 The cast of 3-D Theatricals’ “Spamalot.” Marc Ginsburg is on the left, second from the top, in silver chainmail, just below the actor with the long red hair. Credit: Shyla Marie Photography

“Spamalot” actor Marc Ginsburg on his role as Lancelot… and four other parts. The show plays two weekends in Redondo Beach

“Monty Python and the Holy Grail” was a hilarious send-up of the Arthurian legend that provoked mayhem at movie theaters in 1975. Three decades later, and altered somewhat, it appeared onstage as “Spamalot,” where it garnered 14 Tony Award nominations, winning three, including Best New Musical. 3-D Theatrical brings it to the Redondo Beach Performing Arts Center for shows this weekend and next. One of the plum roles belongs to actor Marc Ginsburg. Actually five roles, a couple of which could also be nectarines or cherries. Although based in Encino, Ginsburg has performed regionwide, including as Leo Bloom in “The Producers” at the Norris Theatre, which was reviewed (favorably!) in these pages by Kathryn Cross in 2013. His website is marcandliza.com. But here’s what he’s has to say about his role in “Spamalot.”

“Spamalot” has been around since 2005, and since you’ve been around even before that, were you familiar with the show before auditioning for 3-D Theatrical’s production of it? Had you seen it and said “Oooh! I’d love to be in that one?”

Marc Ginsburg: Being a big Monty Python fan, I’ve been a fan of the show from the beginning. I distinctly remember reading the cast and creatives list on Playbill.com and thinking “Tim Curry, David Hyde Pierce, Hank Azaria, AND Sara Ramirez? And Mike Nichols directing?! I have to see this!” And I did get to see the original Broadway cast except for Hank Azaria, who was filming a TV show (the role was being played by Alan Tudyk, and he was fabulous). The show was a huge spectacle, the performances were so sharp, and I hadn’t laughed that hard at the theatre in quite some time.

How did you find out about the audition, and when you did, did you audition for a specific role? Did you get the one (well, ones in this case) you wanted?

Ginsburg: There’s so much fantastic theatre going on in the Southern California area and I try to keep my eye out for as much of it as possible. Luckily, 3DT is a very visible company so as soon as I saw that they were doing “Spamalot,” I knew I had to be a part of it. Actually, I was originally brought in for Sir Galahad/Black Knight/Herbert’s Father. When I was called back in, I was asked to prepare Sir Lancelot material as well. So, I worked hard on both of them and, a couple days before, was told that they probably would only want to see me for Galahad.

Fast forward to callbacks. I had spent all day doing the Galahad material, and towards the very end of the night I was asked if I could read for Lancelot. Luckily, I had prepared enough that I still felt comfortable with it, went in, did a couple of scenes, and here I am alongside Nick Tubbs who is a fantastic Galahad. It was a win-win.

Actually, you have five parts…

Ginsburg: I do! Along with five different accents! Thankfully, Hank Azaria is so uber talented that they just kept giving him more parts with different accents and they all became part of the Lancelot track. In addition to Lancelot, I am a turret guard who knows a lot about African swallows, the French Taunter, the Knight-Who-Says-Ni, and Tim, the Enchanter.

That’s quite a few hats. Do they all fit nicely on your head?

Ginsburg: It’s a lot of work but, lately, I have been getting work where I play multiple characters with multiple voices so this particular track fits like a glove (or a hat) given my recent work. The biggest challenge is making each character so specific and different from the others, both vocally and physically.That’s also the most fun part about it: Transforming yourself so much that people may not even realize that it’s you.

Have you studied other productions of “Spamalot” by way of films or live shows? In other words, how did you shape your characters or add your own touch to them?

Ginsburg: I’ve been watching “Monty Python and the Holy Grail” for most of my life but the only production of “Spamalot” I’ve ever seen was the original on Broadway, which I revisited by watching it on YouTube (shhh, don’t tell). You have to walk a very fine line with this show. As much as we, as actors, strive to shape our characters in our own way, we have to accept that the audience is expecting certain aspects of this material that are familiar to them. If I don’t do John Cleese’s French Taunter voice or Michael Palin’s Knight-Who-Says-Ni voice, they will know immediately and it may be jarring or upsetting. So we can’t try to reinvent the wheel too much.

Having said that, we have to make this production our own or else why do the show when people can watch the movie from the comfort of their home? So, I watch the movie and the show once each to get their respective flavors (as they are somewhat different), then put them away so I can dissect the script and develop my own take on the characters, their relationships with the other characters, and my own take on the jokes – all within the Python framework, of course.

At this point, you’re well into rehearsals. Each show has its challenges. Were there any demanding or unusual challenges for you for this show? Or did you find the rehearsal process to be fairly straightforward and not overly difficult?

Ginsburg: Well, the biggest challenge is always the time frame. We’re putting up a huge, Broadway caliber production in two and a half weeks so we have to work very quickly and efficiently. There’s no time to mess around. Luckily, we have a great creative team, but this show is a monster. The sets are huge, there are a million costumes, and a billion props (all from the original Broadway production). If you’re not on stage, you’re changing costumes. For me in particular, I have a few fun challenges. Aside from the character choices and voices, I have to walk on stilts, ad-lib some jokes, perform on top of tall ladders and castles, and wear some of the heaviest costumes in the history of musical theatre.

Now that you have a greater familiarity with “Spamalot,” why do you think it connects with audiences? Or are there audiences it doesn’t connect with, and why would that be?

Ginsburg: Well, not every show is for everyone. I’m sure there are some who aren’t as familiar or fond of this brand of humor and its natural silliness. That’s ok. To each his own. I don’t even think the Pythons expect everyone to like their material. That’s part of their genius. They are fearless writers, actors, and comedians and will try everything, regardless of how they think it will go over. Obviously, those that are familiar with the movie or Monty Python in general will love this show.

It’s fairly true to the source and was rewritten for the stage by Eric Idle, so even the differences are very much in the Python vein. But, on a deeper level, it’s about finding the Grail inside of you which, to me, means finding the thing inside of yourself that makes you special and is the most important thing in your life. It’s a pretty universal message that I think we can all relate to.

You seem to play a wide range of characters, from serious to humorous with all points in between. Do you feel there’s a type that suits you best? And, that said, are there certain roles that you have your eye on, that you’d like to be cast for one day?

Ginsburg: The thing I love about performing is getting the chance to transform, so I really value the people who have trusted me to play a wide variety of roles. I don’t know that I have a type that suits me best. I approach every role the same way and just try to be truthful in my performance. I have been doing lots of comedies lately but I don’t think I’m an especially funny person. Good writing is good writing so I just let the material do its work. I actually prefer doing more serious work. It’s cathartic. You can let out all of your frustrations on the stage and leave the theatre feeling cleansed. That’s why I’d love to play someone like Sweeney Todd or the Phantom or Willy Loman one day.

As for your favorite shows that you’ve been in, what are you most proud of, and wish we’d all been there to see?

Ginsburg: Wow. That’s hard to say. But, if I had to choose, I’d have to say playing Cervantes/Don Quixote in “Man of La Mancha” at Glendale Centre Theatre in 2014. You don’t generally see a lot of 33 year olds play that role and I am so thankful to Randy Brenner for giving me the opportunity. It really stretched and challenged me as an actor in ways that I didn’t even anticipate. I can honestly say that I am very proud of that performance. That’s probably the one I wish everyone could have seen.

You’ve been in a couple of films. Do you have aspirations to go more in that direction, or do you see yourself as primarily a theater person?

Ginsburg: I have been on film a couple of times, most recently in the [upcoming] film “Racing Colt,” written by my limitlessly talented friend, Scott Damian, and co-directed by he and the equally amazing Heather Provost. And I am definitely interested in doing more! Having said that, my heart will always be in the theatre. There’s nothing like the thrill of live theatre and I don’t think I could live without it.

What’s next for Marc Ginsburg?

Ginsburg: In the distant future, who knows? To all casting people who may be reading, I am available! In the not-too-distant future? My wife, myself, and our two good friends and partners are producing and performing in a concert version of “A Little Night Music” at The Colony Theatre from Sept. 21-24. In the immediate future? I am just looking forward to opening “Spamalot” this upcoming weekend! I promise you will laugh, cry (from laughing), and laugh some more.