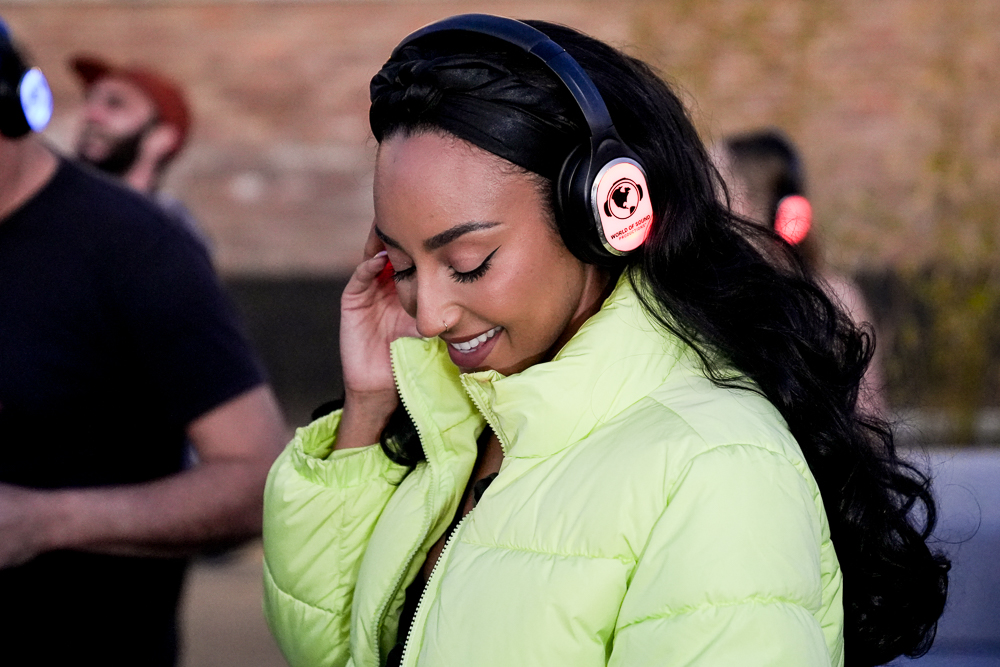 Lost in the music during Sunday night's 'Silent Disco' at Vista, on Pier Plaza, in Hermosa Beach. Photo by Jefferson Graham

Story and photos by Jefferson Graham

Over 300 people danced to the “silent disco” on the Vista restaurant patio, at the corner of the Hermosa Strand, and Pier Plaza Sunday evening. Silent disco is coming back to Pier Plaza, at Baja Sharkey’s on Sunday, Feb. 20, and then back to Vista on Sunday, Mar. 6.

It’s the brainchild of Hermosa Beach resident Adam Malovani, who wanted to bring live music to outdoor venues without running afoul of local noise ordinances. Admission to Sunday’s “silent disco” was $15 to $30, and let people get out their COVID era angst by dancing the blues away.

“There’s just something about it, when you put on the headphones, it gives you permission to dance,” says Malovani.

Patrons were issued headphones that lit  up with a color that corresponded to the music the wearer was listening to. Sunday night, there were three DJ channels and a programmed playlist channel.

Because World of Sound operates on solar power, Malovani didn’t have to worry about high electricity costs, or places to plug in. And because there were no bands, there were no power sucking amps.

Malovani got the idea for “headphone concerts” while skiing at Mammoth Mountain a few years ago. As the lift took off, he noticed people wearing headphones and singing Neil Diamond’s “Sweet Caroline” aloud. He brought the idea to Hermosa Beach, which has a long history of live music, and took it into the digital age, using wireless headphones.

He held his first “headphone concert,” featuring local bands, in front of Java Man on Pier Avenue over the 2020 Super Bowl weekend, shortly before the start of the pandemic .

Last October, when indoor entertainment was largely prohibited because of the pandemic, he produced the Hermosa Harmony Festival on the beach, south of the Hermosa pier. Over 1,200 people paid $40 each to attend the headphone festival, which featured live bands and DJs

Sunday night’s signal was strong enough for those with headphones to listen to the music while wandering along the beach and along Pier Plaza.

Malovani, who calls himself a “serial entrepreneur,” had been looking for his next act since a $1.5 million exit from founding a photography website, Your Photos on Canvas in 2013. He went on to create an audio tour of Hermosa Beach, which he donated to the Hermosa Beach Historical Society.

“I believe ‘headphone concerts’ have the potential to be a global brand, with sunset headphone concerts all over the world,” Malovan said. “It’s been resonating with the public even more since the pandemic. People feel the need to be joyous, to connect with others through dancing and smiling.” ER