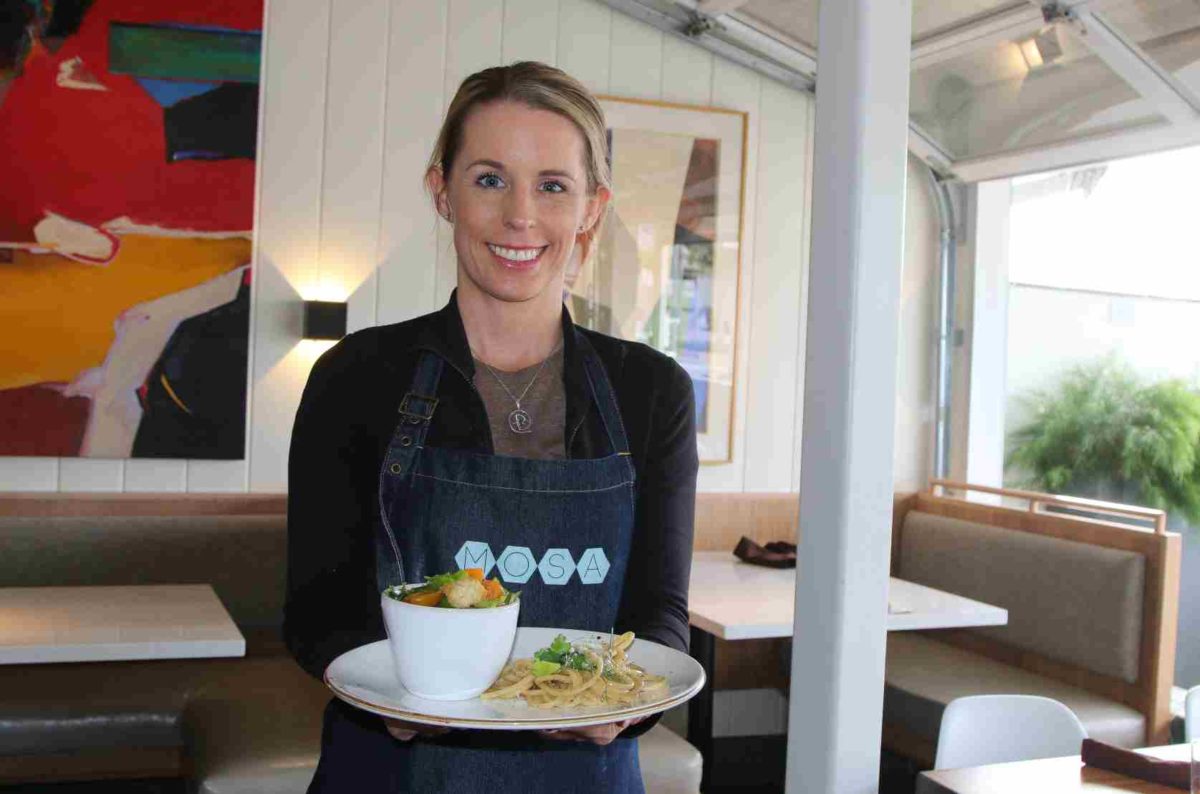 If you see only one canvas by a painter, you’ll have a glimpse at their sense of composition, their skill at brushwork, perhaps their inventiveness with color. And that’s all, a glimpse, because you don’t know the context of the piece. Was it their first sale or a mature work, perhaps a commission rather than something they really wanted to do?

The same is true with creative chefs. You have to watch them in one place for a long time to see how their style evolves, or see what they do in multiple places. Since job-hopping in the culinary industry is common, experiencing different restaurants is the more common path to knowledge.

In the case of Anne Conness, we have a lot of data points – she created the original menus at Simmzy’s, Tin Roof Bistro, and Sausal before leaving the area to create a modern Israeli menu at Jaffa in LA. Now she’s back with one of the most interesting restaurants to open last year, Mosa Coastal in (where else?) Hermosa.

The former Serve on 2nd has been remodeled, but still has the space age beach cottage feel of the previous place. There have been improvements in the acoustics, and the newly opened back patio is one of the prettier outdoor spaces in town. The culinary theme here is described by their website as a “seafood and pasta house,” which suggests a more limited focus than what they serve. Though there are a few relatively conventional pastas and fish dishes here, there is much more. You can see how Conness wove her previous experiences into Italian ideas.

Some signature items jump out to anyone who has followed her – the pull-apart rolls that appear here with olive oil, rosemary, and marinara were presented with Yemenite spices at Jaffa, and the encore was a great idea. They arrive at the table too hot to eat, and when you detach the first one, aromatic steam wafts around the table. They’re an appetizer in the literal sense of the word, something to excite the senses in preparation for the rest of the meal. 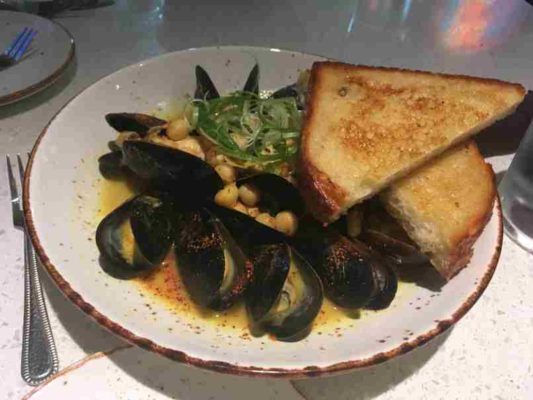 A plate of mussels at Mosa shows hints of Spanish and North African fusion. Photo by Richard Foss

Other dishes echo the balance of Mideastern fusion from Jaffa and the old Spanish style that shows up at Sausal. The steamed mussels in a fennel broth are a Sicilian recipe, but a sprinkling of Basque espelette pepper takes them into new territory. Pickled shaved scallions add a breath of sharpness, garbanzos a beany background note, and if you like shellfish it’s a must. The calamari salad is more overtly North African influenced thanks to the use of spicy harissa sauce with pistachios, mint, and a bit of pickled lemon. It’s a balance of fruity, spicy, and herbal that fits in an Italian-themed restaurant thanks to the centuries of commerce and culinary transfer across the Mediterranean.

There’s a similar balance in the charred eggplant with yogurt, honey, and basil, which arrives topped with stewed onion in a slightly fruity sauce. There are more flavors in this dish than you can process at a single sitting, and we almost ordered a second plate while still eating the first. Mosa can turn out standard Italian items too, such as their Caesar salad or the pasta entrees we tried. The pumpkin ravioli with brown butter and sage might have come from any fine Italian restaurant – but wait, were those pomegranate seeds adding fruity bursts into the mix? Yep, and they modify the sweetness of the pumpkin in a way I haven’t had before. I watched for any such influences in the chicken marsala, but the sweet wine and mushroom sauce was a classic well executed. 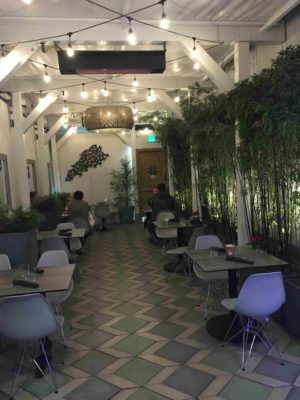 The rear patio at Mosa in the evening is softly lit and relaxing. Photo by Richard Foss

The scampi were similarly simple, though surprisingly mild. In America, scampi are often an excuse to eat heavily garlicky shrimp with butter, but this version featured a delicate sauce sparingly applied. We all liked it, but I’m a fan of the bolder flavors that appear elsewhere on the menu. On another visit I tried the pork chop Milanese, a panko-crusted piece of meat that would be called a schnitzel on the other side of the Italian-Austrian border. This was tender and fried crisp, slightly bland by itself, but some sweet pepper and onion peperonata was on the side to liven things up. The Milanese’s topping of arugula with shaved Parmesan helped matters too, though I might have liked just a bit more of it.

The cioppino was one of the more unusual variants I’ve tried. This stew was invented in San Francisco by fishermen from Genoa, and it’s usually a thick, heavily herbed concoction. Mosa’s version has a variety of fish and shellfish in an unusually light stock without strong herbal notes, but with frizzled fried fennel and scallions as a topping. Those items add aromatics and interest to the dish of seafood and broth, but it still felt like something was missing. I was on the fence about whether it worked the night I tried it, and as I write this I’m still undecided.

Mosa offers a short but well-curated selection of wines and beers, and if you like red wines one in particular stands out. The Tenuta Pragal has the spice and fruitiness to complement the zesty, complex flavors that chef Conness favors. At $44 a bottle it’s a great buy.

We tried two desserts, the espresso panna cotta and a lemon ricotta cheesecake that was served over a raspberry coulis. The panna cotta was good, but if you like cheesecakes where you can really taste the cheese, get this one. I find most restaurant cheesecakes overly sweet and cloying. This reminded me how good they can be.

Mosa just started opening for light breakfast and lunch, and a friend and I stopped in for a spicy chicken and grilled grouper sandwiches. The grouper was slightly underseasoned, the chicken perfect. Lots of places try to hop on the Nashville hot chicken trend by making their bird inedibly spicy, but the spicy slaw on this one added mild heat and full flavor.

Mention should be made of the service team at Mosa, led by house manager Nancy Vrankovic. The servers on my first visit knew their jobs and what they were selling, a sign that training wasn’t skipped in the rush to get open. The combination of professional staff with the cozy environment, which was largely designed by Nancy’s and Anne’s partner Bob Lombardo, makes a fine setting in which to appreciate the food.

Mosa’s transnational approach to Italian food is generally successful, and those who have been following her career will find it fascinating to see how her ideas have recombined here. The prices are moderate, with dinner entrees between $18 and $30, so your wallet won’t scream as you sample the work of one of the South Bay’s homegrown stars.