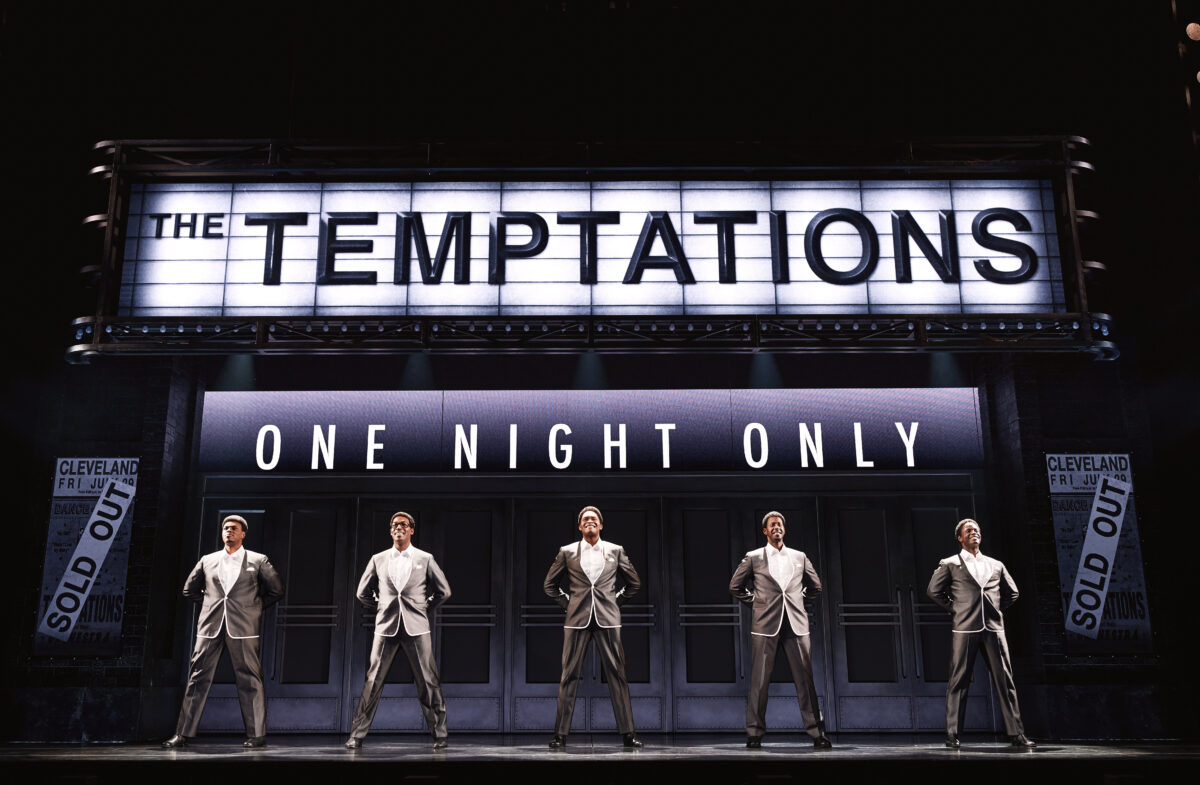 The musical legends of Motor City

For some viewers this is a new experience – Ah, so that’s what it was like! – and for others it may be a two-hour trip into the past, immersed in the era’s memorable songs, the singing, the matching outfits, and the choreography. During the mid- and latter-1960s, soul music was on every AM transistor and car radio, and the Temptations were on the airwaves as often as anybody else, from Stevie Wonder to Aretha Franklin.

“Ain’t Too Proud to Beg” takes its title from one of the group’s biggest hits. The musical revue is based on the autobiography of Otis Williams (“The Temptations,” co-written by Patricia Romanowski), who was one of the founding members and, half a century on, he still fronts the group although the other four in the original lineup are now deceased. In the years since, another 20 other performers have stepped in to fill their shoes.

From the material in Williams’s memoir Dominique Morisseau has shaped a narrative interspersed with 30 songs, all taken from the Motown catalog (including hits by the Supremes, etc.). The director, Des McAnuff, has won acclaim for other pop musicals such as “The Who’s Tommy,” “Summer: The Donna Summer Story,” and what could be a template for this show, “Jersey Boys.” The choreography is by Sergio Trujillo, whose credentials (among them “Jersey Boys”) are no less impressive.

These concert-documentaries follow a similar trajectory in that we often know the music but not necessarily the backstory about how the group was formed, how it struggled, and found success. As we’ve seen with “Jersey Boys,” it’s not all wine and roses once they’ve landed on Billboard’s Top 10. Stardom seems to have several handmaidens in the wings: Drugs and alcohol and the “temptations” of many love affairs, often extramarital. For example, in this show, we’re privy to the domestic squabbling between Williams (Marcus Paul James) and his first wife Josephine Rogers (Najah Hetsberger). Their marriage lasted just three years.

We can add to this the arguments that arise over money and control of the group, meaning how or in which direction they want (or don’t want) to evolve, as well as who gets top billing. For example, it wasn’t always Donna Ross and the Supremes or Smokey Robinson and the Miracles or even Frankie Valli and the Four Seasons. Some groups, of course never succumbed to such blatant hierarchy, at least not officially: No one’s ever seen an album cover that reads Mick Jagger and the Rolling Stones.

Which brings up an interesting point.

In “Ain’t Too Proud to Beg” the pivotal figure is Otis Williams (afterall, the show is based on his memoir), and it’s Williams who steps out towards the audience to comment upon the story as it unfolds. We’re his confidants, in other words. But here’s a case where the central figure isn’t well known or charismatic. Smokey Robinson (who penned two of the Temptations’ early hits: “My Girl” and “Since I Lost My Baby”) is a household name, but Otis Williams? On the other hand, a couple of the Temptations did go on to have fair to middling solo careers: David Ruffin (“My Whole World Ended (The Moment You Left Me)”) and Eddie Kendricks (“Keep On Truckin’ (Part 1)” and “Boogie Down”). If anything, Williams’ claim to fame is as a survivor and as someone who worked hard to keep the group together. It’s paid off nicely in the five years since the show premiered, and my guess is that Williams attends many of the opening nights when the show is on the road, as he’s done now twice at the Ahmanson. 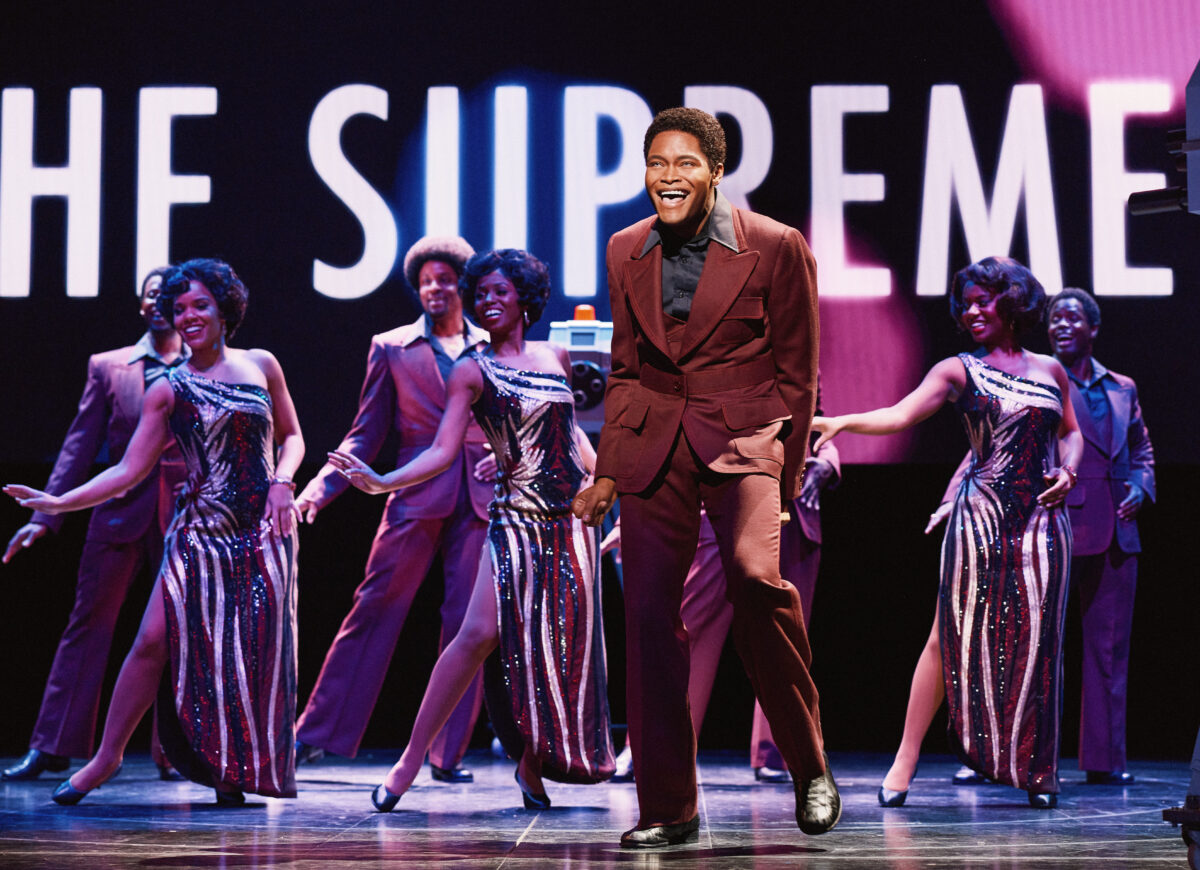 Jalen Harris and the National Touring Company of “Ain’t Too Proud,” through January 1. Photo by Emilio Madrid

Within the musical itself the Temptations are touted as being Motown’s top success story. If so, others were close behind: The Four Tops, Martha and the Vandellas, the Isley Brothers, as well as the Supremes and Stevie Wonder.

And, by the way, that’s just the Motown catalog. We can’t dismiss Atlantic Records and their subsidiaries, Atco and Stax, with the Drifters, Sam & Dave, Otis Redding, Ray Charles, Wilson Pickett and Aretha Franklin.

The core of “Ain’t Too Proud to Beg” might actually be less the performers and more those standing behind the scenes. First and foremost, Berry Gordy, who ran the label and decided how the Temptations should be presented or groomed for the public. As mentioned, it was Smokey Robinson who wrote the group’s early hits. But as for the later singles it essentially came down to two men you may never have heard of: Norman Whitfield and Barrett Strong. It’s not just what songs they wrote, it’s what songs didn’t they write?

Whitfield composed the music and Strong penned the lyrics (in almost every case). These are the songs they created for the Temptations: “Ain’t Too Proud to Beg,” “Ball of Confusion (That’s What the World is Today),” “Cloud Nine,” “I Can’t Get Next to You,” “I Could Never Love Another (After Loving You),” “(I Know) I’m Losing You,” “I Wish It Would Rain,” “Just My Imagination (Running Away With Me),” “You’re My Everything,” “Runaway Child, Running Wild,” “Superstar (Remember How You Got Where You Are),” and “Papa Was a Rollin’ Stone.” A song originally written for the Temptations but given to Edwin Starr was “War,” which became a number one hit.

Additionally, Whitfield wrote Marvin Gaye’s “Pride and Joy” and Gladys Knight and the Pips’ “I Heard It Through the Grapevine.” During the mid-’70s he wrote hits for Rose Royce.

Lyricist Strong reached the pop charts one time, back in 1959, with “Money (That’s What I Want),” which became far better known after the Beatles recorded it.

I’ve gone off the tracks to point out that, unlike the Beatles, the Rolling Stones, the Doors, etc, the Temptations relied heavily on the contributions of others. There were pros and cons where this was concerned.

“Ain’t Too Proud to Beg” is an enjoyable, successful work, but it pales slightly if compared with “Jersey Boys”.

There are many reasons why. The Four Seasons penned many or most of their own hits, and there are only a half-dozen key players in their story whereas over the years the Temptations have had 25 different singers in their lineup. Also, while the Four Seasons had some say-so in what they released, the Temptations remained under the thumb of Berry Gordy who not only gave the group the songs he thought best for them, but during the latter 1960s was hesitant to have them record overtly social or political material (and this is probably why Edwin Starr was handed “War”). He figured that by having them refrain from “controversial” material they might hold onto rather than risk alienating their audience. 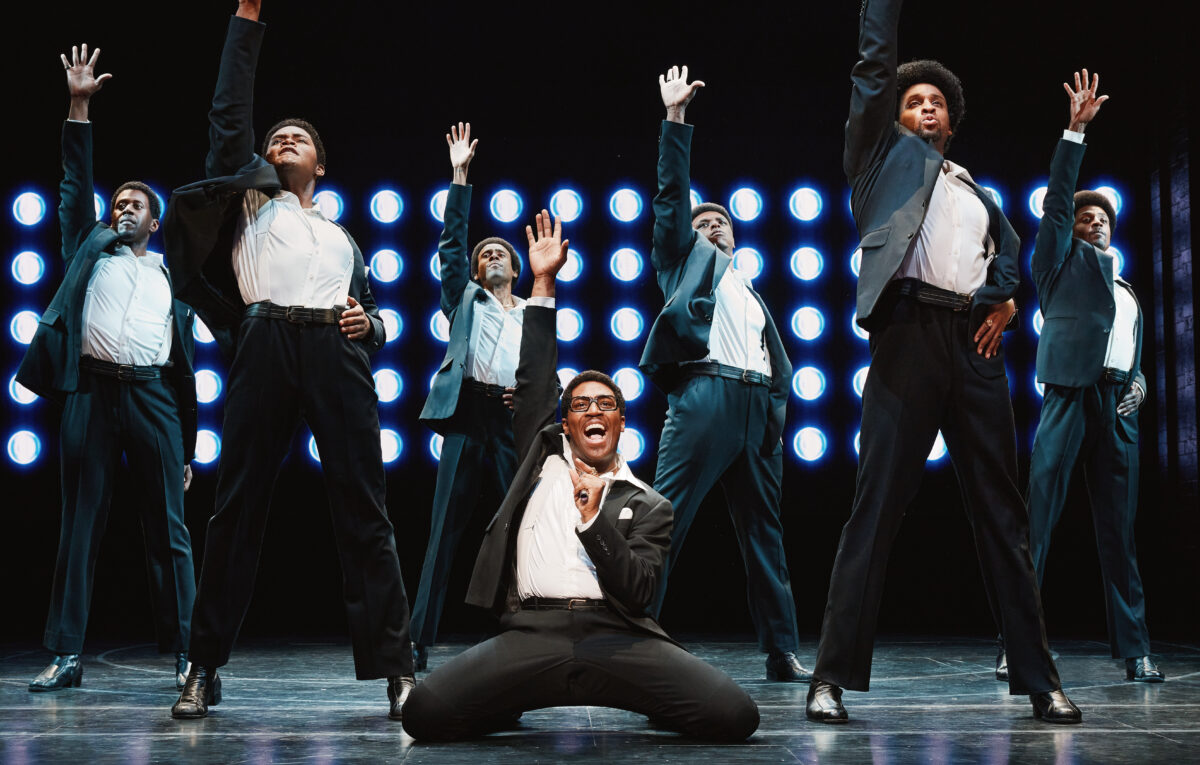 The National Touring Company of “Ain’t Too Proud,” through January 1. Photo by Emilio Madrid

However, it did become de rigueur for artists in the late ‘60s to show that they were socially attuned, and so while love songs still prevailed, as they always have and always will, nearly every group or solo artist had a song or two in their repertoire to show that they were aware of the prevailing social and political climate or at least the winds of change. For example, “Revolution” by the Beatles, “Sympathy for the Devil” by the Rolling Stones, “Unknown Soldier” by the Doors, even Donovan’s “To Susan on the West Coast Waiting,” which included the refrain “from Andy in Vietnam fighting.” Motown artists stepped up as well: Marvin Gaye, Stevie Wonder…

Eventually the Temptations entered the fray, specifically with “Papa Was a Rollin’ Stone,” a nearly seven-minute song with a musical introduction almost two minutes in length. Apparently the group didn’t want to record the song and saw no merit in doing so. But they did, and then, no small surprise, it became one of their biggest hits.

The show is delightful and engaging because the singers are as convincing as the 2018 cast when “Ain’t Too Proud to Beg” first played the Ahmanson. Not only is one impressed by Jalen Harris as Eddie Kendricks and Elijah Ahmad Lewis as David Ruffin, but there are stand-out performances by James T. Lane as Paul Williams and Harrell Holmes, Jr. as Melvin Franklin. I could go on and on here; simply put, the cast is first-rate.

I didn’t give it much thought when I first watched this revue, but perhaps the saddest character of them all is Tammi Terrell (Shayla Brielle G), best remembered for her duets with Marvin Gaye. Terrell died from brain cancer at age 24. She suffered physical abuse from James Brown and also the Temptations’ David Ruffin, with whom she was, briefly, romantically involved. Ruffin comes across as having been a class-one narcissist, but at the same time we may speculate on what he’d be like if he was alive today (he died at 50 in 1991), and also how that would modify the stage production.

Because there is an urgency about the show, the balance of narration and song can often seem a bit rushed. There are, as mentioned, 30 songs, but almost all of them are pared down to Twitter and Tweet capacity. That may not be a failing, as such, but as Diana Ross sang, “you can’t hurry love.” You also can’t hurry a good, memorable song without invoking some ire among many listeners. There’s a balancing act to be considered between pumping out the songs and then reminiscing over what once was, but is no more. The show manages to deliver on both accounts.