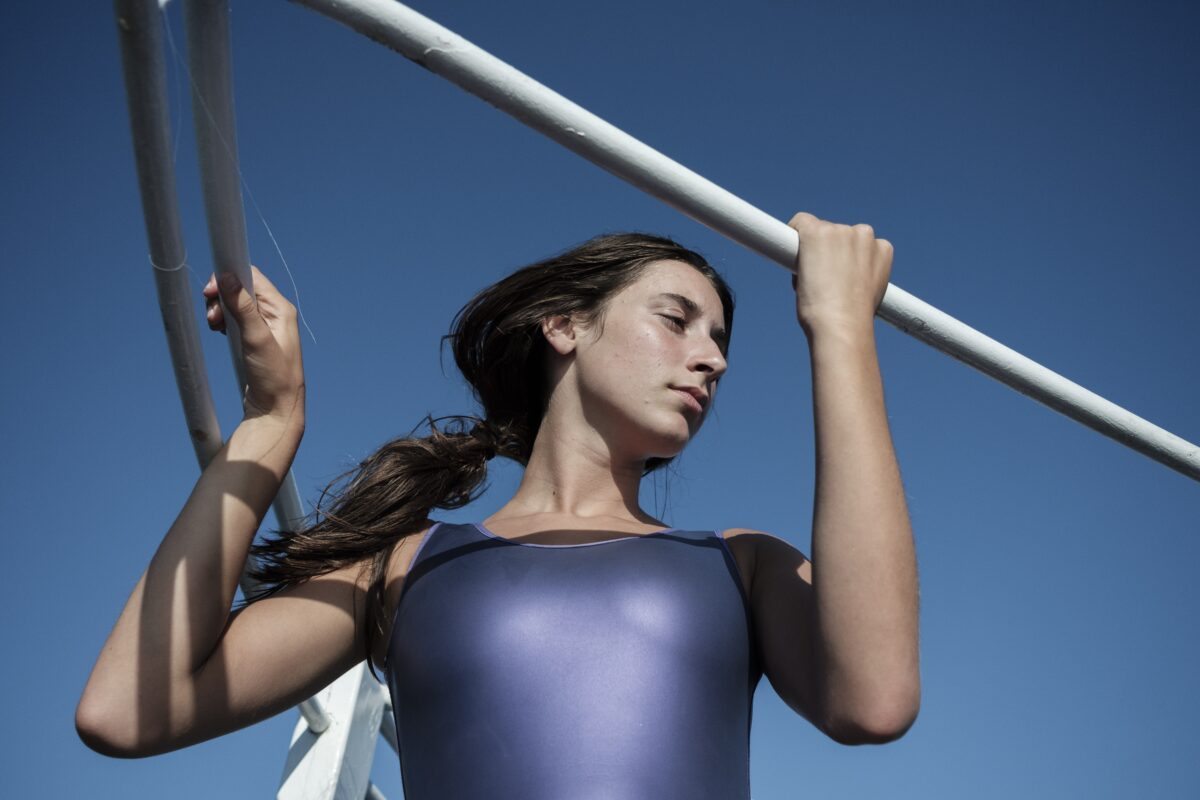 “Murina” is the outstanding feature film debut of writer/director Antoneta Alamat Kusijanovic who co-wrote the screenplay with Frank Graziano. Set on a Croatian island in the Adriatic, a place where she spent many summers with her grandmother and great grandmother, Kusijanovic set out to tell the tale of a teenager coming of age in what, from the outside, looks like paradise but that is, in her reality, a stifling, limiting environment dominated by an autocratic abusive father who imprisons her physically and mentally. 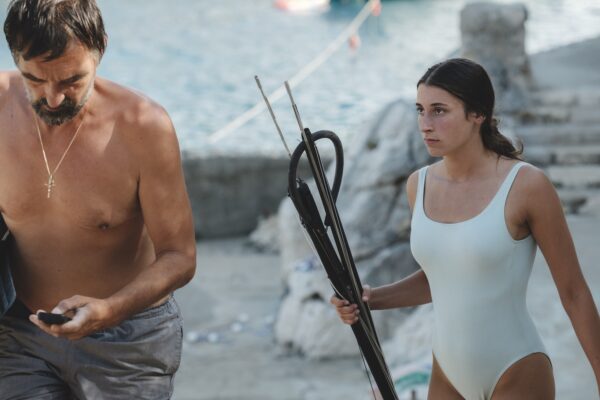 Leon Lucev as Ante and Gracija Filpovic as Julija in “Murina.” Photo courtesy of Kino Lorber.

Julija lives in a wondrous seaside village where everything revolves around the water. Her father Ante owns a boat and one of the few developed docks in the harbor. Everyday, he and Julija go spearfishing for moray eels (murinas), a challenging species with many hiding places and lightning fast reflexes. Significantly, Julija states that the eel would rather cut off part of its body than be caught, a metaphor for young Julija who develops a scorched earth policy regarding her life with her father.

Julija is most at home in the water; it is all she has ever known. Ante has big plans for the island and has enlisted several of his friends as potential partners. He feels the island, a natural paradise only four hours by boat from Italy, would be perfect for a resort. Enter Javier, a friend from his youthful, reckless sailing days. Javi, now a  billionaire, has the easy manner of someone who always gets his way, whether by charm or by force. Ante believes that Javi will be his salvation and provide the funds to turn the island into a resort haven, making Ante rich in return. 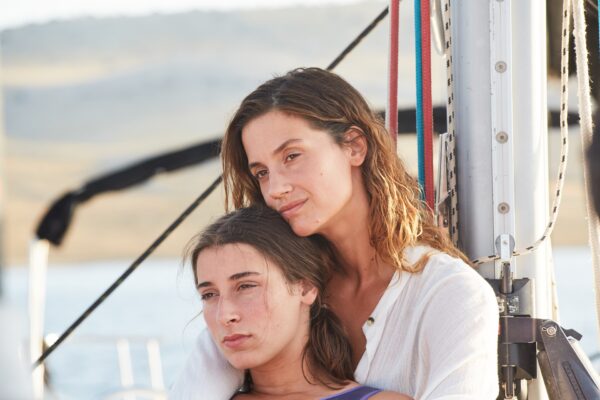 Danica Curcic as Nela and Gracija Filpovic as Julija in “Murina.” Photo courtesy of Kino Lorber.

Early in their relationship, they competed for the same beauty, Nela, who married Ante. The circumstances and loss of the more promising suitor, Javi, remain a source of unspoken tension. The continuing attraction between Nela and the billionaire is palpable. Julija, on the cusp of maturity, who will, at some point, be as beautiful as her mother, sees in Javi everything that is missing in her father — the promise of a future. Ante, unwilling and unable to see his wife and especially his daughter as complex, intelligent, and independent beings, reacts poorly to his friend’s interest in their prospects. Nela, inured to the bleak destiny set by the poor choices of her past, is alarmed by Julija’s attraction to Javi. It’s not just the sexual tension that is present but also the unrealistic vision of the improbable opportunities offered by her former lover. For the first time, Julija sees a life outside the confines of the island. Even the promise of living in Dubrovnik if they sell their land on the island is no longer a big enough dream. Javi represents the world; Ante, a prison.

The harsher the punishment by Ante, the stronger the rebellion by Julija, who, in her own fantasy, would be better off if she and her mother left with Javi. Her mother tries gently to let her know that life is never simple and Julija’s scenario for a new life is not possible. There are things she doesn’t know, that she doesn’t understand. But Julija doesn’t have the maturity of life experience to see things clearly. Her life is defined by her father and everything she can’t do. The bottle has been opened and the genie refuses to go back in.

Kusijanovic has made a movie about longing, bristling with youthful sensuality and the contradictions of power and powerlessness. The astonishingly beautiful surroundings are offset by the shoals of Ante’s toxic masculinity that sees every uncontrolled movement as a challenge to his authority. Nela’s quiet sadness and acceptance is offset by Julija’s refusal to succumb to the stifling expectations of her father. She will burn down her home rather than accept her father’s rule. It is the past confronted with the future. Violence will only harden the young against the old.

The story is slight. Ante wants to sell his land and make a quick buck. He thinks he can get the better of his old friend, not realizing that he never had a chance. That he won Nela may not have been a win if Javi wasn’t playing the same game. Ante reacts more and more like a cornered animal as circumstances get away from him. That his daughter defies him may be a final crushing blow. One way or another, this is a story that goes back eons; one way or another, every Greek tragedy was based on family disintegration. Where Kusijanovic excels is in character development. Everyone in this scenario is changed, for better or worse, when Javier, the unwitting antagonist, arrives. All, including Javi, must deal with the consequences, none for better, of the interactions of the weekend. In simplistic terms, it’s all about power dynamics. Ante, for what he has lost; Nela, for what she has acknowledged, and Julija, for what she has gained. Javier, the eternal pebble in the shoe, leaves the island recognizing that he has inadvertently upended the hierarchy of the family. But then maybe, this is what he does best. 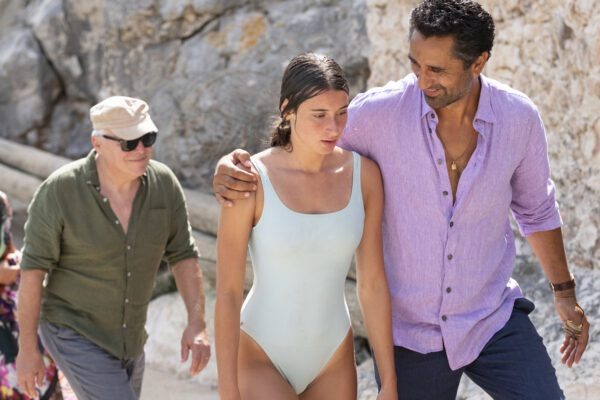 Gracija Filpovic as Julija and Cliff Curtis as Javier in “Murina.” Photo courtesy of Kino Lorber.

The cast is uniformly terrific. Leon Lucev as Ante runs from insincere bonhomie to trapped wild animal trying to snarl and threaten his way to freedom. His portrayal of this autocratic husband and father displaying his goods, as in wife and daughter, to a “friendly” rival is both naive and dangerous. Danica Curcic as Nela has an ethereal beauty that belies her circumstance. Trapped between an abusive husband and a daughter whose promise is threatened, she finds a way to communicate support without threat. Gracija Filpovic as Julija is an incredible find. Adolescent features topping a woman’s body, she finds a way to embody the contradictions and insecurities that lie within someone who is just beginning to understand the power of her own sensuality. Her refusal to compromise how she sees the world deepens the contradictions and complexities of her character.

And finally, there is the incomparable Cliff Curtis as Javier. With a handsome beauty of undefinable ethnicity, Curtis, a New Zealand Maori, has played everything from a frightening Latino drug dealer in “Training Day,” to a disillusioned Arab in “Three Kings.” Perhaps known to television viewers for his role in “Fear the Walking Dead,” he is so much more than the sum of his parts and brings instant credibility to any character he plays. As Javier, he never allows his character to reveal the superiority you know he feels. Always the consummate confidante, he doesn’t let friendship interfere with his goals. His Javier will stab you in the stomach, smile while sticking the knife in, and somehow make you grateful that he took the time to do it personally. For me, Cliff Curtis is that rare actor whose presence in a film or television show compels me to watch even if the overall product isn’t worth my time. Do I have a crush? You betcha. The minute he showed up on screen, I paid more attention. And I’m glad I did because this is a great example of a familiar story that found new ways to tell it and tell it quite well.

The cinematography by Hélène Louvart (“The Lost Daughter”) is breathtaking. She successfully captures both the beauty and the danger of this natural setting. Ultimately, though, the success of this tale lies with Kusijanovic as director and writer. She is an enormous talent and one hopes that we will be seeing more of her films.

In Croatian and English with English subtitles.

Opening July 15 at the Laemmle Monica.