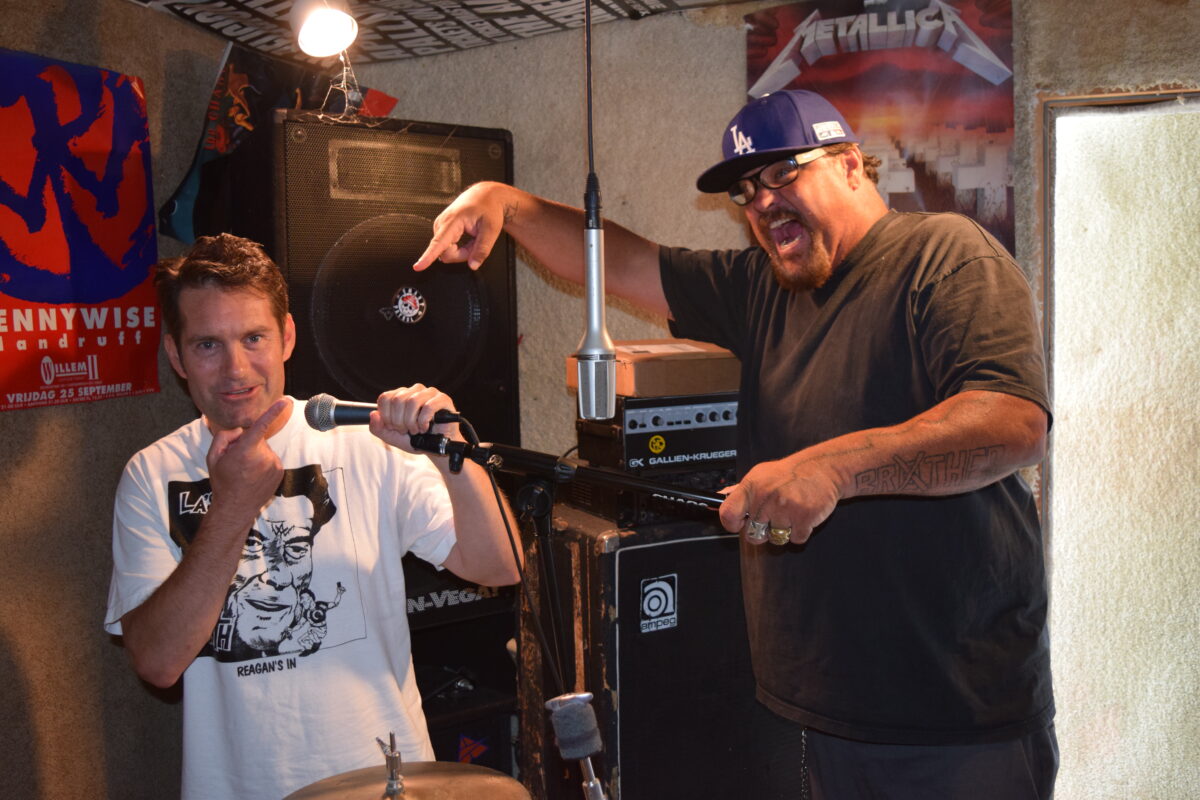 Justin Thirsk, left, points to his weapon of choice, with an emphasis from Fletcher Dragge. Photo 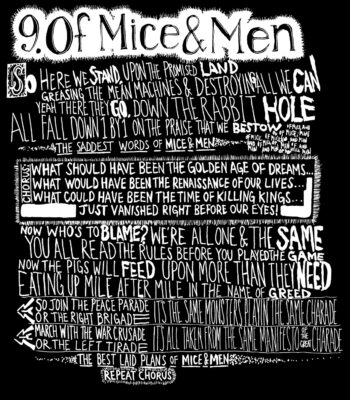 Justin Thirst handwrote the lyric sheets for the new songs.

By its nature, punk rock is a 95-mile-per-hour speedball sailing in high and tight. Your reaction is visceral, because that comet-like glob headed for your brain basket is urgent, agitated, and raw. So it’s a bit surprising and ironic, at least on the surface, that 10 years have elapsed between “Manifesto” and “Burn Motherf… Burn,” the new 20-song disc from South Bay’s Chaos Delivery Machine. What happened?

“We just took our time because we knew we could.” says Justin Thirsk. “We wanted to get it right; didn’t want to half-ass it.”

Will it be 10 years until we see a third album?

Thirsk writes all the lyrics for Chaos Delivery Machine, sings them like a banshee, and drums too. The music is penned by guitarist Jason Page. And the third member of the group is someone or other named Fletcher Dragge.

“Him and Jason wrote all the songs,” Dragge says. “I just basically forced my way into the band. When I heard (the music), I was like ‘I’m playing bass, and I’m producing.’”

By the way, no one contradicts Fletcher Dragge. 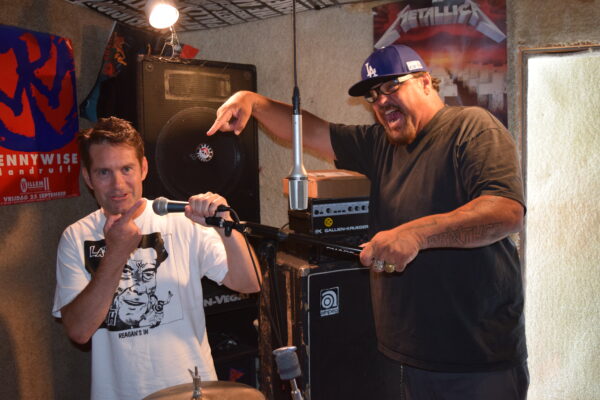 Justin Thirsk, left, points to his weapon of choice, with an emphasis from Fletcher Dragge. Photo

Is there a big difference between the two albums?

“I think this album is sonically bigger,” Thirsk replies, “more powerful, not as thrashy as the old one.” He pauses. “I love the old one, and I love this one too. It’s a little different, more thought-out.”

“Yeah, totally. But we took our time recording it. Instead of days it was weeks.”

Is the trio happy with the result? Did they achieve what they set out to achieve?

“Our main goal was to have aggressive music,” Thirsk says. “I don’t mind if somebody absolutely hates our album. That’s okay, as long as it gets some sort of response. This isn’t a money-maker for me. Other bands might have to do some stuff to where they think it’s gonna sell. It’s more like, this is what I want, this is what we want. People can like it or dislike it. That’s up to them. But we like it; we’re proud of it.”

“Burn Motherf… Burn” is a straight-ahead, hard-hitting album, but it wasn’t born without a few tussles in the studio, often incited by Dragge, it appears, in an effort to stir up some passion, some anger, maybe some trouble too, and then to extract the best work possible from his cohorts.

One is unlikely to place Thirsk in the sensitive singer-songwriter category, but he’d lived with his lyrics and how he envisioned them being delivered, for a long time. So initially, he resisted Dragge’s demands to try some of the material a little differently.

“When I had a thing singing in my head for seven years,” Thirsk says, “and all of a sudden going into the studio he goes, ‘Do it this way,’ and I don’t do it the first or second time, he starts yelling at me, because he’s Fletcher. It’s hard when you have a certain way you say a line in your head for seven years; all of a sudden I’ve got to say it a completely different way, a different cadence. This is very hard to do, and I fought against it.”

Dragge grins devilishly and tries to explain himself:

“I wanted to make him mad, because the lyrics are so dark… Not necessarily dark but just such an attack on everything wrong with the world. Like, I’m not gonna sit there and go, ‘That was great, really good job,’ and then give him a pat on the back and rub his feet. When he’s not doing good I ride him to the point where he was actually punching walls in [the studio] and then singing like (he emits a throaty scream), and I’d be like, ‘Yeah, see?’ That’s what I was trying to do, trying to keep you angry to deliver the proper passion.”

“That’s what he’s saying now,” Thirsk replies and everyone laughs.

Anybody who’s been in a band or part of a creative team knows that there’ll always be some infighting and arguing, with some people reluctant to compromise without lots of persuasion. But if it’s a productive working arrangement then what emerges at the end is presumably for the best for all concerned, bruised egos aside.

“It was definitely more of a produced effort from start to finish than the first one,” Dragge says of “Burn Motherf…. Burn.” “The first one was just like punk rock — get in there and throw it, and just don’t care about anything. We literally recorded 20 songs and mixed it — recorded and mixed it — in about three days. But it turned out good, and the rawness was good.”

“Three or four days, yeah,” Thirsk adds. “So there was basically no time to argue. I sang all 20 songs in one day. If I screwed up a sentence, who cares, let’s go on.” 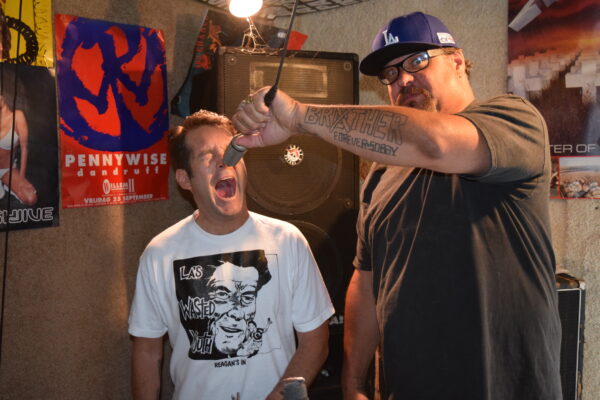 Justin Thirsk shows how it’s done and even Fletcher Dragge is impressed. Photo

Not pulling any punches

Thirsk not only wrote the lyrics, he printed them out by hand and in so doing turned them into visual works of art. Only one problem, though. There’s no lyric sheet included with the album. You’ll have to go to chaosdeliverymachine.tumblr.com if you want to see them in all their splendor and glory.

“It’s my homage to Nick Blinko from Rudimentary Peni,” Thirsk says; “one of my favorite bands. He did all his stuff by hand.”

“Any song you listen to,” Dragge says of the new album’s lyrics, “if you have half a brain you’re gonna be, like, ‘That’s dead-on.’”

One of the songs, “God of Prey,” takes aim at sexual abuse in the Catholic Church.

“We’re not pulling any punches,” Thirsk says. “We’re just singing it how we like it, how we think of things. You can either agree or disagree, that’s up to you.”

Dragge is a little more blunt: “If you don’t agree with the lyrics on this record, then you are part of the problem.”

To wit, here’s the chorus from “Travels with Perses”–

“Progress looks so much like destruction/ Strangled by the billion busy hands of corruption/ Choking on the swarming stifling smoke of pollution/ Progress is nothing but destruction.”

And this verse from “De Rerum Natura”–

“Can’t we see we’re all insects/ All this is temporary/ Our towered & corrupt cities, they all fall eventually/ The Bronze & the Iron Age destined to decay in rust/ But the land will remain & our arrogance turns to dust.”

And one more, this from “Conjunctive Rhetoric”–

“I wake up screaming from reality/ Cause I’m sick & tired of the insanity/ Always accepting the false conformity/ Feeding upon the mass hypocrisy.”

“The problem with the world,” Dragge says, “there’s so many people that are just complaisant, eating their Kentucky Fried Chicken and whatever poisonous food they bought at 7/11,and just turning a blind eye. People are just sitting around on this planet, just pretending that shit’s not happening.”

“Basically it has to do with corruption,” Thirsk says. “Greed, corporate greed. I think of the Catholic Church as a corporation too, to tell you the truth. It’s the power. Power corrupts, absolute power corrupts absolutely, and that’s what this world is going to; and it’s not going in the right direction.” 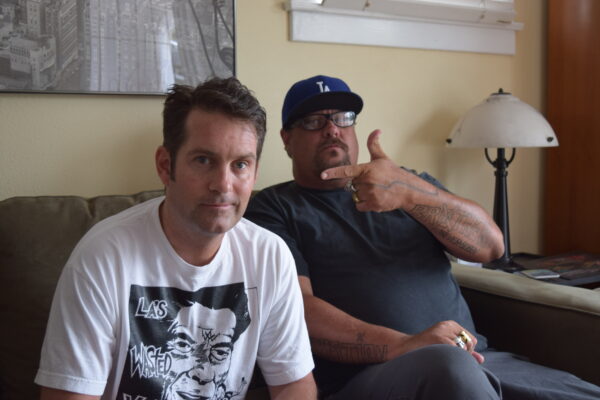 Justin Thirsk and Fletcher Dragge of Chaos Delivery Machine, being grilled about the making of their new album. Photo

By themselves, the lyrics may be harsh, but decked out with drums, bass, and guitar, as well as the incendiary vocals, the message explodes just the way it’s supposed to.

When Thirsk sings, it’s a cross between a tirade or tantrum and a turbine engine. If you’re thinking all that singing must have brutalized his vocal cords, you’re right–and there’s no way all the songs could have been recorded over the course of a day or two.

In the studio, Thirsk says, “I’d get through about a song and a half and then lose my voice to where it would have to be three or four days later for me to be able to sing another one. I don’t sing from my diaphragm. I don’t know keys, notes, pitches; I just scream it–what I feel, and however it comes out it comes out. You can’t say the words I say in a nice voice.”

For punk rock bands like Black Flag, Minor Threat, and Bad Brains, Dragge says, citing these and other groups, “it was just full-throttle.” And when he sings, Thirsk is right there with them. “You hear the desperation in his voice, and that’s what Justin has going for him,” Dragge continues. “He’s got a terrible voice, terrible singer, but the passion that comes across is what makes it cool for me to be in the band.”

“Burn Motherf… Burn” was recorded at Screaming Leopard Studios in Hermosa Beach, and is available on Ken Seaton’s Hardline Records. It was engineered and co-produced by Ian Peterson, who incidentally co-produced the most recent Pennywise album, “Yesterdays.” Art and sound effects come courtesy of Steve Martin.

Although they won’t be performing (“Imagine being in a band that has two albums out that’s never played a party,” says Fletcher Dragge), Chaos Delivery Machine will be on hand Saturday evening for their record release party at Fat Face Fenner’s Fishack, 53 Pier Plaza, Hermosa Beach. (310) 379-5550.