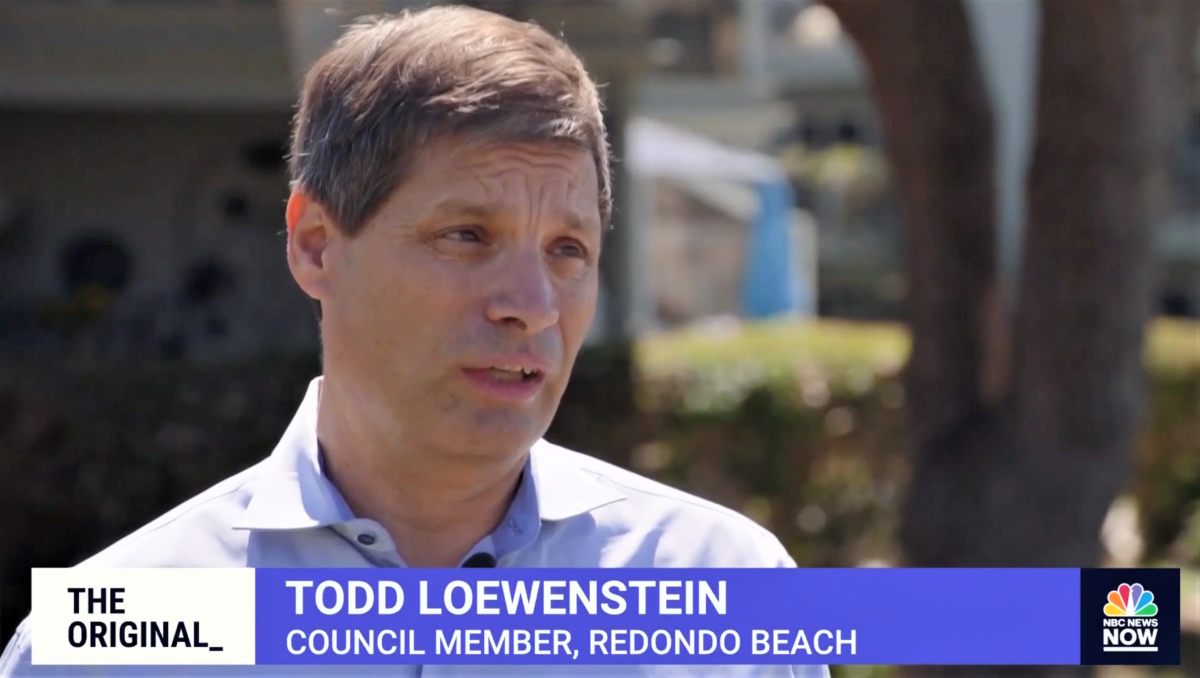 An NBC News Now report about the future of the AES power plant site in Redondo Beach, titled ”California Beach Community Fights Over Low-Income Housing,” has been called a “hit piece” by City Councilman Todd Loewenstein.

The District Two representative, who is featured in the report, said NBC made factual errors, including referring to the AES as a “former” power plant (it still is in partial use), and stating imprecisely that the city “missed a deadline” to file its state-required housing plan.

The city’s plan was approved on its third submittal.

“I just thought it was a hit piece,” Loewenstein said after the Oct. 13 NBC News Now report.

The story tells of the strife over what the AES site should become after it is ultimately decommissioned – now set for the end of 2023. AES owner Leo Pustilnikov is shown talking about his proposed large-scale housing, hotel and retail development at the 54-acre site, including 500 affordable rental units.

The Redondo Beach city council has been split on what it hopes the property becomes, debating whether it should be parkland, mostly development or a mix of both.

This comes at a time in which the state requires cities to plan for more (affordable) housing.

“(NBC) didn’t show how densely populated we are,” said Loewenstein. “They didn’t show the Esplanade. We have 11,000 residents per square mile. More than anywhere along the coast besides Hermosa. The most expensive property in California is on the coast. We have low-income housing a couple blocks away. We serve people from all economic backgrounds in this town, through inclusionary zoning, we have Section 8 housing…”

To another question, Loewenstein said that many residents who have a water view have worked their way up to being able to afford it.

Mayor Brand’s statement reiterated that the AES site is zoned as parkland, with a conditional use for the power plant, and that Pustilnikov’s proposal to build 2,300 or more housing units on the site – post-decommissioning – was “dead on arrival.”

“That land is parkland, we’re trying to make it for everyone to enjoy,” Loewenstein said. “Again, it’s parkland, zoned parkland.”

Loewenstein said he talked to NBC reporter Jacob Ward for an extensive period of time.

“I thought (the story) was going to be fair,” he said.

“I thought it was embarrassing for (Loewenstein), and the city,” Horvath said. “It makes us seem tone-deaf and elitist.”

He noted that he doesn’t support all of what Pustilnikov wants to do, either.

“The conversation is, do we need more housing; there is no rule where that housing should go,” Horvath said.

He concurred with Loewenstein on types of housing in the city.

“We do have a diverse mix of housing,” he said.

At least ten percent of any new housing in the state’s Coastal Zone, which includes the AES site, is required by the Coastal Commission to be affordable housing. ER