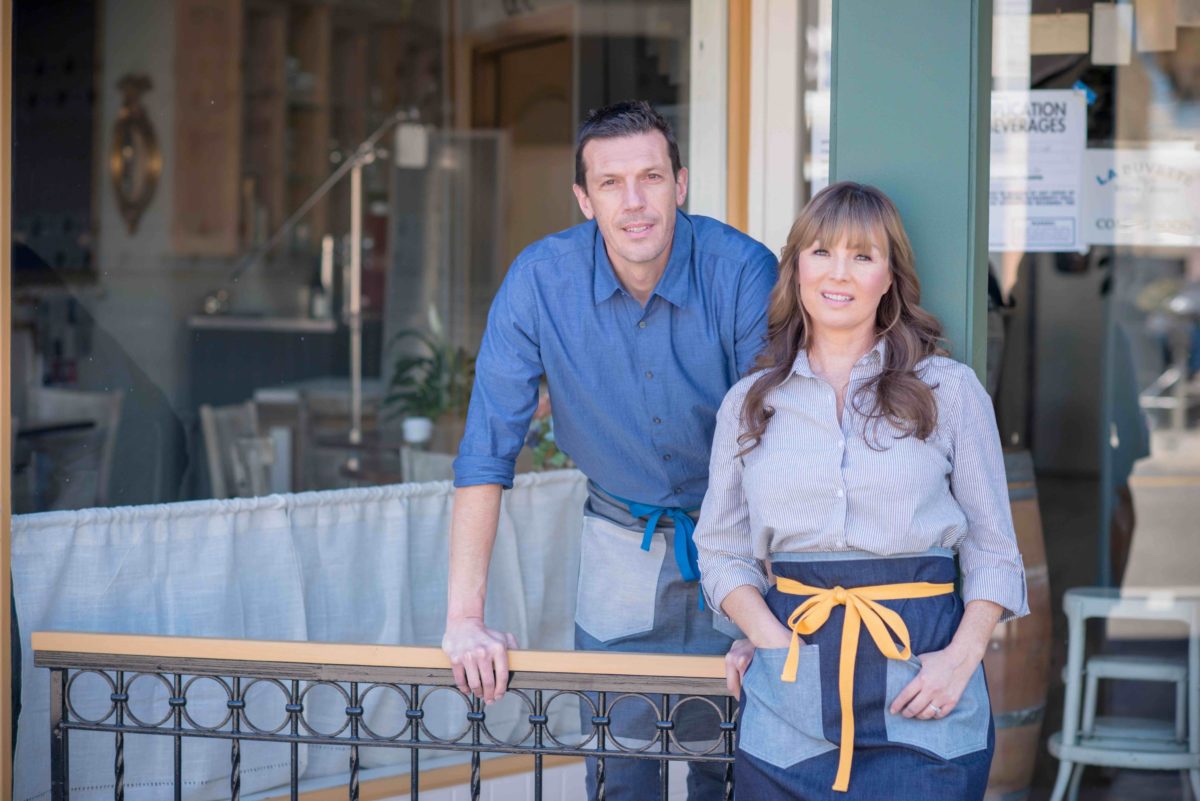 When Loni Compagnon met Thomas, the man who is now her husband, there was an awkward moment. He was then the sommelier at Cafe Pacific at Trump National Golf Course in Rancho Palos Verdes but mentioned his ambition to open his own restaurant.

That offhand offer was a prophecy. Just over a month ago, Loni and Thomas opened La Buvette Bistro in San Pedro just over a month ago. ‘Buvette’ is slang for food stand in Thomas’s native France, but that doesn’t begin to suggest the rustic warmth of the space.

It’s somewhat unlikely that this place exists, because when Thomas came to California he had no intention of staying. He had spent years as sommelier in restaurants on the French Riviera in summer and in the Alps in winter before moving to Britain, where his career prospects were excellent, his daily experience less so. As he recalled, “I had a really good job in London, but the British lifestyle was not to my liking. I couldn’t afford to live in downtown London, the commute was terrible, and it was cold. I came to Los Angeles to visit a friend, I liked it here and found a good job, and I stayed. It wasn’t exactly a plan. It was just what happened. The job was sommelier at Ocean Trails, and I was there from day one. I was hired by Robert Bell and Michael Franks, and I stayed when it was bought by Trump.”

Being a wine adviser in California took some adjustment.

“There were things that surprised me, the portion size, and the fusion thing so there’s not always an identity in terms of a cuisine. I also had to adjust because I had only studied Old World wines. I had to go back to school for the California movement, the new world techniques, so I knew what the style was like here. Also in Palos Verdes in 2000 people were very much about name recognition, buying only things they had heard of, but a little later things changed. By 2006 the economy was booming and everybody was all about trying new wines, they were more adventurous. When the 2008 recession hit people were not trying new things anymore. They were back to the old name recognition, the wines that everybody else in the South Bay was selling. It was getting boring, and it was a challenge to move anything but big names.”

Things got better Trump but Thomas, by then engaged to Loni, started preparing to open a restaurant of their own. Loni says they started out by visiting rummage sales rather than looking at real estate.

“Once we got together, we started a hope chest for this restaurant – we’d go to thrift stores and flea markets and find things. There are things here that we bought long before we had any place to put them. That espresso maker – we’ve had it for three years, and the scale we’ve had for four. In a way it was good that we didn’t decide we liked a place immediately, because we learned a lot about the business and complying with regulations along the way. We just kept looking for the right place, and then we found this.” 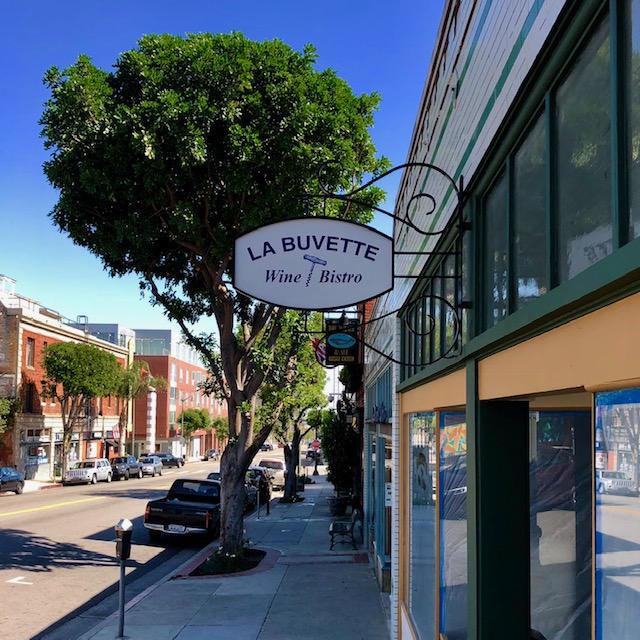 The space they had found was a pretty room that had previously been a Louisiana-style cafe. But it had one big problem – a kitchen that was rudimentary and had no oven or hood. It took almost two years of trekking to and from city hall for permits and dealing with contractors before everything was ready. They decided to not tell anybody so the new staff could get used to the space and the chef could get practice with the recipes. It didn’t work out that way.

“We thought we’d open quietly and come up to speed, but on the first night we had a line out the door and sold out of everything” remembered Loni. “It’s kind of a miracle that things are going so well. We didn’t anticipate being as busy as we are, and we have a whole new staff that are keeping things running while still learning about each other. Some places have been open for years and don’t have this kind of camaraderie.”

The reason for La Buvette’s immediate success has something to do with the many people who had come to know Thomas at Cafe Pacific. Thomas humbly appreciates their loyalty, but also understands that he had to deliver on their expectations.

“At Trump I established a lot of connections, and those people are at least willing to give you one shot to support you. If they like it, they will return. They all know about this place; everybody knows about it.”

Loni says he isn’t kidding about his recognition level, both on the hill and in the neighborhood.

“When we go to the Trader Joe’s in PV or San Pedro, he knows half of the people in the store. I’ve been living here for 25 years, but it seems like we can’t go five steps without people going, “Thomas, Thomas!”

Their timing was good because Cirque du Soileil’s big top is within walking distance and has drawn large crowds to the area. Though that performance group is from Quebec, the French name might put people in the mood for something Gallic for dinner beforehand. La Buvette fills that niche with a short list of bistro favorites, including beef bourguignon, mussels mariniere, steak frites, and Gascony-style duck. These are prepared with flair by accomplished chef Christoff Elce, who Loni says understands the goal of the restaurant.

“Christoff is a really good chef and he’s super creative, but he keeps it traditional. You have to keep reinventing stuff, but not to the point where you don’t know what it is. When you try to do 20 things at once, something gets lost. We’ll constantly change what we offer, but it will always be a one-page menu. It’s short, but there’s something for everyone, and we will keep it that way.”

As Thomas explains, that directness of approach is needed because it’s part of the appeal of a classic French bistro.

“It’s a place that is simple, a good food selection and rather inexpensive, lots of wines from young winemakers. Approachable to everyone, and prices approachable as well. Decent portions, we don’t believe in small plates. We don’t want to call ourselves farm to table, because that name is overdone, but Christoff is in the farmers market and picking things in local gardens. Bistro is about neighborhood, the small restaurant where you meet the chef but also your neighbors.”

In time, La Buvette will host wine dinners and cheese tastings, but they don’t intend to ever lose the casual character of the place. As Loni remarked, “We wanted this place to feel like a French farm, like you’re in someone’s grandma’s kitchen or in a home. This is our home, basically, because we’re here more than we’re home. We wanted it to feel like you’re breaking bread with us, like you’re family.”