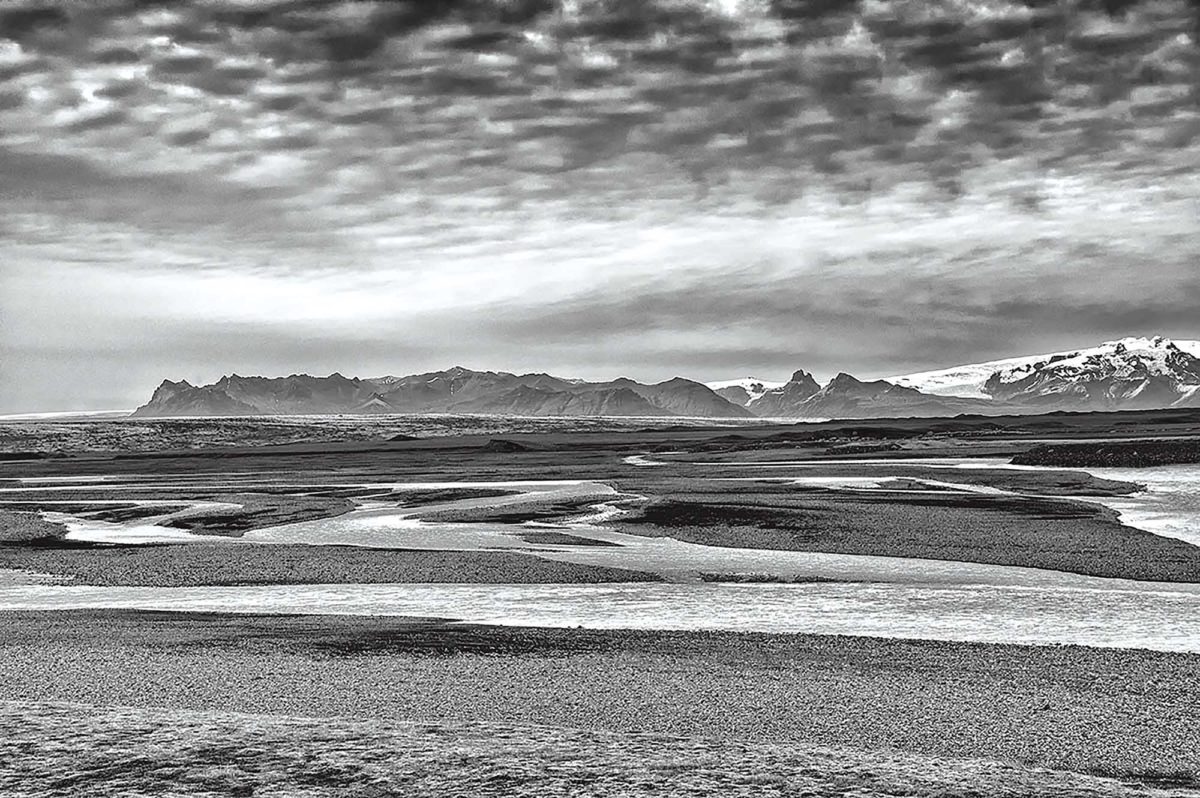 Journey to the Centers of the Earth
No place is inaccessible to photographer (and doctor) Mohan Bhasker
by Bondo Wyszpolski
There’s something to be said for digging in your heels, whether it’s solving math problems or, literally in the case of Mohan Bhasker, trying to keep from sliding off a mountain trail in the Himalayas. Bhasker is comparable to those valuable ballplayers who can hit home runs from either side of the plate. The Rolling Hills resident is both a gastroenterologist and a photographer who sees all the world as his oyster.
Want proof of the latter? See his “Seven Continents,” a large-format book filled with panoramic images taken at remote locations around the globe. Bhasker especially enjoys photographing at sunrise and sunset, when the dawn or twilight colors are most sublime.
Finding the perfect spot from which to set up his camera often takes some doing, and Bhasker seems to have no qualms about hiking several miles, often setting out at 2 a.m. in order to apprehend the sunrise four hours later. As one can imagine, that takes endurance (Bhasker is slight of build, thin and wiry) and passion. Bhasker may at times appear modest, but he’s not shy about elaborating on the ends he’ll go to in order to snare the perfect image. We met at his gallery at the Promenade on the Peninsula, in Rolling Hills. 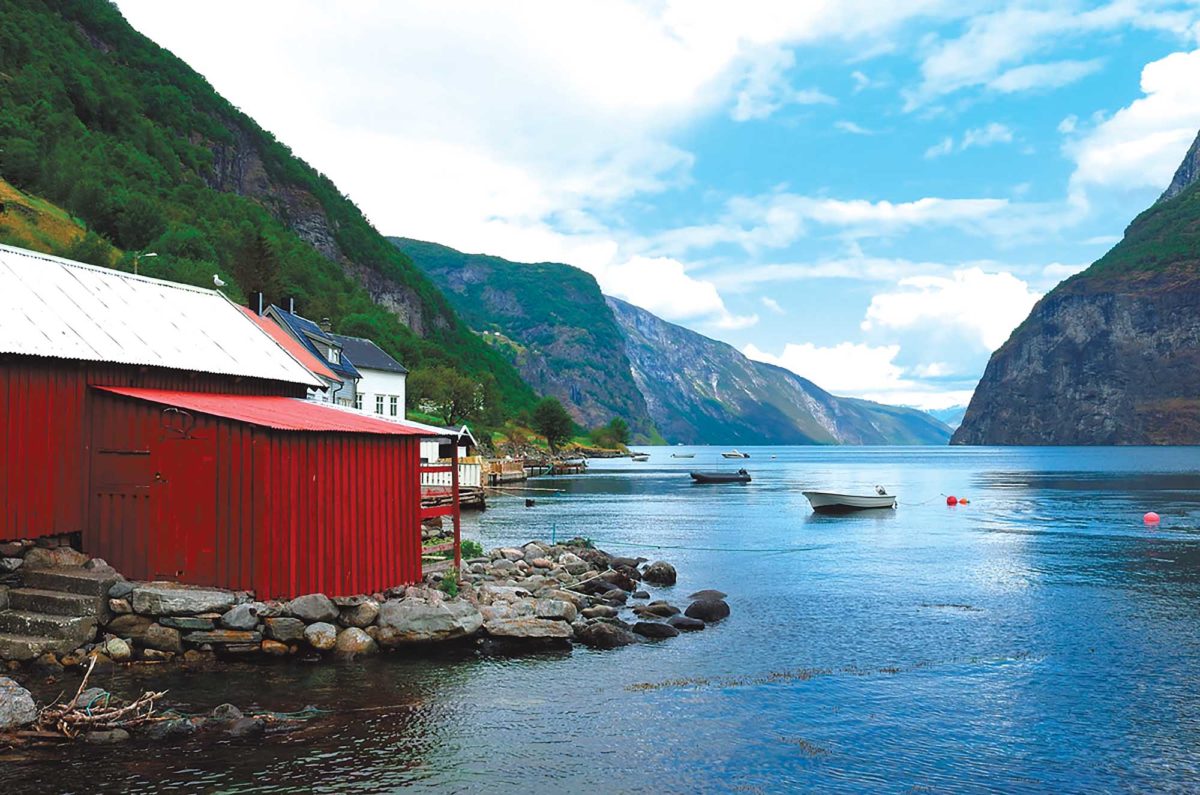 An eye in the viewfinder
“My dad was a photographer,” Bhasker says, “and at the age of 8 or 9 I got my first camera. I worked with him in the darkroom, and that’s where my interest in photography began. And, along with that, my dad was also an avid traveler. I used to travel with him and that kind of became second nature.”
Bhasker, who was born in India, came to the United States “at a very young age.” He graduated from Bangalore Medical College in 1975, did his internship at Stamford Hospital, his residencies at Wayne State University School of Medicine and Charles R. Drew University of Medicine and Science, and his fellowship at Harbor-UCLA. He’s been practicing now for 43 years and has worked at several hospitals in the South Bay and the Westside. For the past several years, however, he’s been based out of the Memorial Hospital of Gardena where he performs colonoscopies and endoscopies about three times a week.
It’s a schedule that give Bhasker plenty of freedom to develop images at home, where he has two darkrooms, and to print his pictures in his gallery, which is managed by his fiancée and travel companion Michelle Parra.
Although he’s lived in Rolling Hills for 35 years, since 1984, Bhasker’s photographic passions didn’t finally begin blooming until the late 1990s. Friends, family, and colleagues knew about his pictures, and in fact he points out that he’d decorated a few homes with his work. So it may only have been at their persistent urging that he pushed forward to become a professional photographer.
So, about 10 years ago, he walked up to Peggy Zask when she had her gallery in the space now occupied by Good Stuff, and asked if she’d look at his work. She did, and thereafter gave Bhasker a show: “That was my first exhibit,” he says, “and I had an overwhelming response.”
Fired up or at least encouraged by this success, “I went and spoke to the manager here and said, What does it take to have my own gallery?” Their ensuing discussion led to the first Bhasker gallery, but after about a year Bhasker was relocated to a somewhat smaller space, one which, for all that, feels more focused, “and I’ve been here for about five, six, seven years now.”
He can also boast of a sizeable mailing list, and every few months Bhasker will roll out his latest images and invite people to see the fruits of his latest endeavors, work which was usually taken at the far corners of the world, if not the galaxy’s edge. 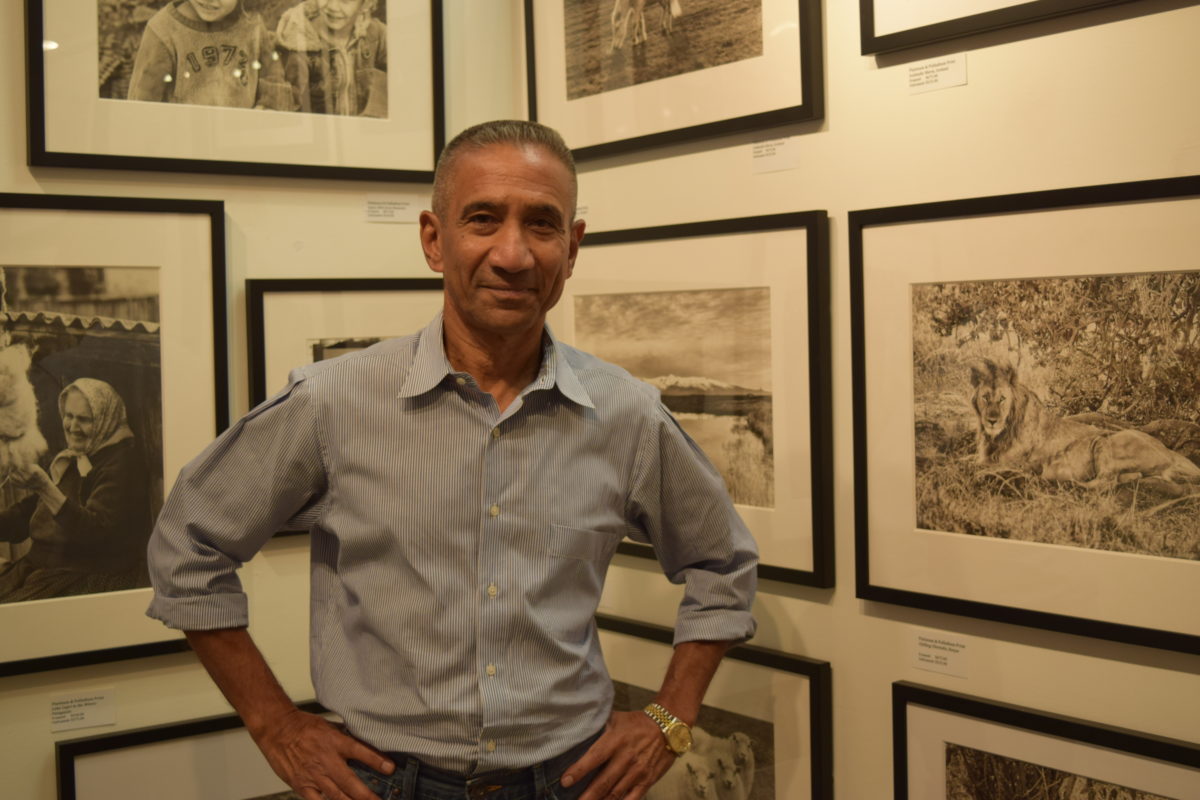 Trekkie with a camera
It’s one thing to have a good eye, a decent camera, and of course favorable weather conditions, but quite another to know how to elicit the best resolution, using the best settings and the best film, and then printing the results on the most fitting paper.
“One of the things that differentiates me from other photographers is that 95 percent of my work is still on film.” The cameras he prefers? A medium-format Linhof 617, a Mamiya 7, and Leica M6. When Bhasker shoots digitally, he opts for a Leica M240 or Leica X2. For his large-format work he uses a Linhof Master Technika 4×5.
As for papers and printing, Bhasker mentions his fondness for the gelatin silver process (think Ansel Adams), and also the platinum or palladium process (palladium prints became widespread when the price of platinum soared, but both processes are noted for their silvery gray tonal variations and their permanence). Perhaps not surprisingly, Bhasker is also a photography and workshop instructor, specifically for Samy’s Photo School in Los Angeles.
In that capacity, Bhasker recently led a photographic expedition into the wilds of Palos Verdes, taking his class to several locations around the peninsula. “I catered to each of them as to what they wanted to learn. It really went well; not many (of the participants) had been here, and it gave them a chance to look at how beautiful Palos Verdes is.”
Not that such a day trip would prepare one for Patagonia or Mongolia, but it could whet one’s appetite for bigger, much bigger and longer, photographic excursions.
In fact, just this past November, Bhasker led a photographic safari to Africa in which a dozen people, starting from Cape Town, ventured to Victoria Falls and other scenic sites. “One of my favorite places to take my photographers,” he adds, “is to India, obviously, because I speak the language, know the people, and I can take them to not just the cities but to places where not many are taken. Because I was raised there, I know where to go.”
For those interested, Bhasker is planning to lead a trip in September to Turkey, Jordan, and Morocco, and then a bit later, perhaps in the spring of 2020, to Nepal, Bhutan, and Tibet.
“It’s very exciting,” he says, “to share what you know, to share what you can do and teach. I truly enjoy that aspect, and that’s the reason I started doing these photography tours.”

And around the world he goes, and goes
“Finding an amazing location is one of the most challenging tasks in landscape photography,” Bhasker says in his artist statement. He’s proud of his several long-distance treks, including one to Nepal’s Himalayan Mount Everest range that spanned 18 days and covered 245 miles. As one might guess, “there were photographic opportunities at every step. I never know when I have captured the perfect shot, but I strive to find that ideal balance between composition, color, and contrast; and to capture a scene that not only grabs my artistic eye but connects with me emotionally.”
He’s sailed twice from the tip of Argentina to Antarctica. “On my first visit,” he writes in “Seven Continents,” “I left from Ushuaia and navigated through the Drake Passage… During my two-day journey across this violent stretch of water our ship was pounded by thirty-foot waves and gale-force winds that caused most of the ship’s windows to explode.”
Bhasker’s second voyage out from the Patagonian hinterlands was to the island of South Georgia, where he spent six days. In addition to the ubiquitous icy landscape and polar sea he photographed colonies of penguins that numbered in the hundreds of thousands. If the Woodstock Music Festival had been attended by birds instead of people this is what it would have resembled. 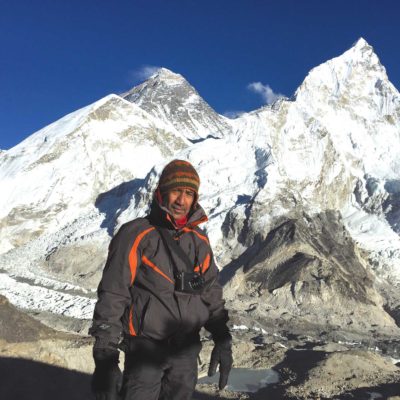 These kinds of adventure may not be for everyone. “No website or tour agency,” Bhasker says, “discloses the fact that fifty percent of hikers in the Everest region are evacuated (often by helicopter) due to altitude sickness.” Well, at 21 or 22,000 feet that doesn’t seem so surprising, does it?
Besides falling into an icy crevasse, other dangers would include freezing or dying of a heatstroke, or simply getting irretrievably lost. And Bhasker apparently has gotten lost on occasion, although so far not irretrievably. He writes about his 55 mile trek into the golden white sand dunes along the Atlantic coast in the northeast Brazilian state of Maranhão. He and his driver, he writes, “were met by a local guide and his donkey, which carried our duffle bags and water. As we set out, all I could think about was that my life depended on the guide. To calm my nerves, I kept reminding myself that life is about taking risks.”
Such extreme traveling might also lead to some serious thinking about the welfare of the natural world, specifically since Mankind’s ever-increasing footprint has already caused irreparable damage. Unlike, for example, Manhattan Beach-based photographer Robert Glenn Ketchum, who uses his outdoor photography to bring attention to the plight of the environment, Bhasker is focused on the personal challenge involved in getting to a remote site, from which to capture the best image possible.
“Seven Continents” certainly contains its share of spectacular views, although the printing in the book too often has a purple tint, and much of the color isn’t entirely convincing. Reproduced elsewhere, the colors are more acceptable. However, what really stands out are Bhasker’s black and whites, which are on view in his gallery but not in the book, and I feel this is one area in which he’s excelled.
Nonetheless, despite the over-emphasis regarding kilometers walked and heights scaled, Bhasker has gone to great lengths in pursuit of his passion and to connect with the world at large. Asked how he manages to stay fit in order to do so, he replies:
“I work out and trek at least three or four times a week, close to six, seven, eight miles in the Palos Verdes hills. I’ve run 10 marathons. I eat healthy, live healthy, think healthy. In order to do this (the trekking) you have to be physically and spiritually healthy. One depends on the other.”
On Saturday, May 18, Mohan Basker is showing his most recent photography from expeditions to Namibia, Patagonia, Victoria Falls, and Yosemite. The reception starts at 6 p.m. and includes live music, wine, and appetizers. (310) 944-2625.
The Bhasker Gallery is located in the Promenade on the Peninsula, 550 Deep Valley Drive, Suite 114, Rolling Hills Estates. For hours, as well as information about classes and tours, call (818) 281-9991 or visit photomohan.us. PEN/ER