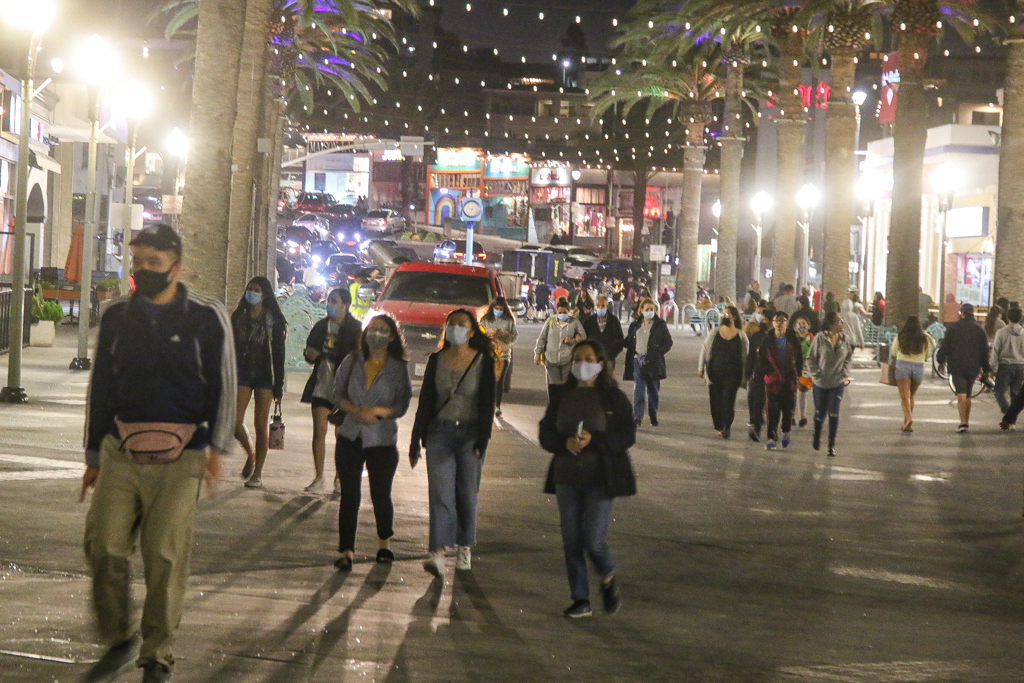 People pass through Hermosa Beach’s Pier Plaza to catch the bioluminescence in the Pacific Ocean in early May. The City Council voted to close the plaza early for the coming Fourth of July weekend. Photo

All restaurants in the South Bay and the rest of Los Angeles County will be limited to takeout and outdoor dining for the next three weeks, Gov. Gavin Newsom announced Wednesday, a move intended to curtail the recent, rapid growth of the coronavirus but which is likely to reignite disputes over the impact of COVID-19 restrictions on the economy.

The decision ends indoor dining in Los Angeles and 18 other counties for at least three weeks, a little over a month after they were allowed to resume service. The affected counties had exceeded various state metrics tracking the virus’s progress for at least three consecutive days.

Although death rates remain below the highs they reached in early May, officials in Los Angeles County and elsewhere warn that rapidly rising hospitalizations of patients with COVID-19 could soon overwhelm the medical system. The rise includes the Beach Cities, which have so far fared better than other neighborhoods in the South Bay but have lately reported steep increases in case counts.

“I really just want to take a moment to remind you all and everyone watching and listening in the community where we’ve gone with our cases,” Hermosa Beach City Councilmember Stacey Armato said at a special meeting Wednesday afternoon. On April 20, the city’s residents had 21 cases, a figure that increased to 28 cases by May 20. But over the ensuing six weeks, cases expanded significantly, and as of July 1, there had been 77 cases in Hermosa. “Clearly we have a problem in town.”

Concern that the upcoming Fourth of July holiday, which in past years has drawn as many as 100,000 people to Hermosa’s beaches, prompted the city last week to consider calling a special meeting to consider further restrictions. The governor’s decision removed some of the urgency, but the council still chose to meet to consider additional precautions for the holiday weekend. They ultimately voted to require all restaurants to close by 11 p.m., ending the sale of alcohol in liquor stores and grocery stores by 11 p.m., closing Pier Plaza to the public by midnight, and closing Parking Lot A.

The actions capped what Brandy Villanueva, Hermosa’s Emergency Management Coordinator, modestly called a “very busy week.” Beginning on Sunday night, Newsom ordered bars in several counties, including Los Angeles to close. Bars had been later on the list of businesses allowed to reopen, and in Los Angeles County guidance permitting them to do so had only been available for about two weeks.

That decision, however, did not have much impact locally. The state Department of Alcoholic Beverage Control lists about 400 businesses with some kind of liquor license in the Beach Cities, but only about a dozen are “bars” with Class 48 liquor licenses, meaning a business that is not required to sell food along with alcohol. The two businesses meeting that description in Hermosa, Saint Rocke and The Hermosa Saloon, have yet to reopen, according to Community Development Director Ken Robertson.

Then on Monday, the Los Angeles County Department of Public Health announced that all beaches countywide would be closed Friday through Monday. The order also closes The Strand, bike paths and piers. City Manager Suja Lowenthal said city staff would begin putting up signs indicating the closures on Wednesday night.

Chief Paul LeBaron of the Hermosa Beach Police Department said that, despite the closures and restrictions, officers would still be out in force on The Strand and the beaches. They will be monitoring for typical concerns like public intoxication and drinking in public, but will also be armed with spare masks to offer to members of the public who are out and not wearing one, which is required by state and local health orders.

“The best way the community can show its support for law enforcement is to refrain from large gatherings with people from different households,” LeBaron told the council.