Not just another Asian fusion restaurant in Hermosa 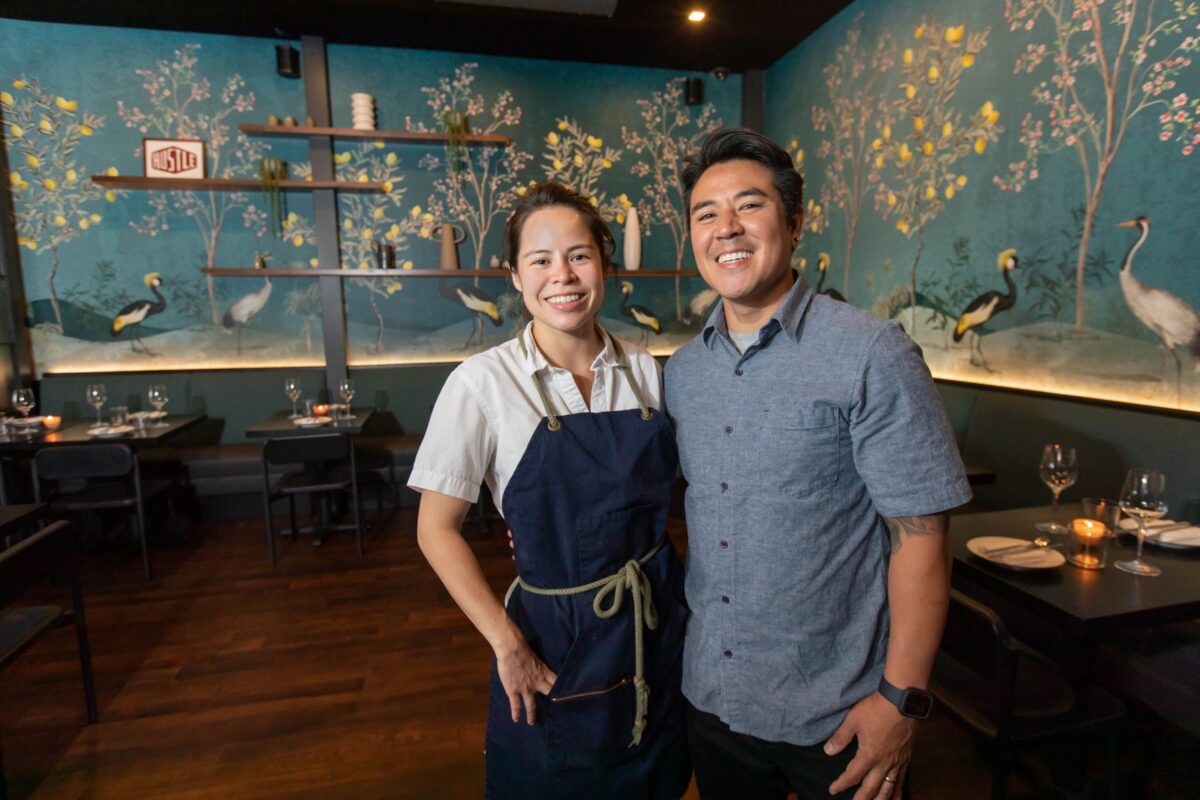 Ryla’s take on Asian fusion is like no other

When I heard a new Asian fusion restaurant was coming to Hermosa Beach, I was a little disappointed. The Beach Cities have lots of fusion places, and if another came with the standard mingling of Japanese, Chinese, and Thai flavors, it might be enjoyable, but wouldn’t bring anything unique to the neighborhood. I was more interested when I read the bios of the chefs, who had previously consulted with the Simms group, and been part of the creative team at The Arthur J. That restaurant set a standard for creativity within the format of a steakhouse, so perhaps this new thing called Ryla could actually be worthwhile.

Having dined there twice and had meals that were some of the best and most thought provoking in recent memory, I can confirm that yes, it is more than worthwhile. The husband and wife team of Ray Hayashi and Cynthia Hetlinger hit the ground running with an ambitious menu that includes Japanese and Taiwanese influences but is unorthodox and eclectic.

The former Laurel Tavern has been transformed into a sleek, elegant space that resembles a modern Japanese Izakaya. After sundown the interior is dark, intimate, and rather loud. The bar area is high energy, the low tables on the opposite side marginally quieter, and if you prefer a serene meal you might dine outside. The area is tastefully but minimally decorated with plants, and while it isn’t as stylish as the interior it’s my favorite part of the place.

The menu is relatively short but has lots of variety, and in multiple visits we tried three appetizers: kanpachi sashimi, agedashi tofu, and hot chicken karaage, and two salads, a beet and their eccentric Caesar. The wild caught kanpachi has a distinct difference in texture from the farmed variety that’s usually found in sushi bars, firm rather than soft. Kanpachi is a fatty fish and has some silkiness and richness, and this was accented by the condiments that came with it: freshly grated wasabi, pickled nasturtium, and Washington state pickled seaweed. The nasturtium were less floral than expected and had a pleasant but slightly bitter flavor – they’re sometimes on menus as calendula, which a botanist would argue is a related species, but that’s only important if you’re dining with a botanist. The seaweed had a drier texture and more flavor than the garden variety stuff, and the wasabi was very different from the dyed horseradish that’s usually passed off as wasabi. That has heat but not much else; this has some vegetable flavor that accents each bite. Only a dab is provided, but that’s all you’ll need.

Our server heard my wife and I debating whether to get the Nashville style karaage chicken because it might be too hot for her, and surprised us by bringing a half portion with the Nashville style batter and the other half with a less seasoned version. My lips were still burning five minutes after finishing my half portion, but it was a good burn.

The only item that needed work was the agedashi tofu, for which we had high expectations. It arrived looking like jewelry, pearls of orange salmon roe over bright pink grated radish flanking a generous portion of uni topped with julienned nori seaweed. Unfortunately the tofu hadn’t been fried long enough to develop a crisp crust, which is essential to this dish. The fried tofu is served partly submerged in broth and when not very crisp loses its texture very quickly. It was a near miss, and I’d order it again but ask for it to be fried longer. 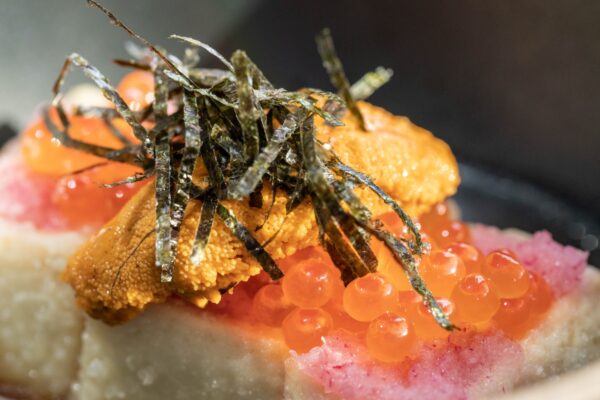 The agedashi tofu looked like jewelry, with pearls of orange salmon roe.

The beet salad had a similarly ornate presentation, a ring of pieces of braised beets alternating with pomelo slices topped with candied walnuts and arugula leaves and flowers. In the center of this was a pool of mascarpone cheese topped with espresso powder, which both completed the presentation and was a brilliant flavor companion to the beets. Espresso and mascarpone are usually found together in tiramisu, but they’re terrific with the sweet and tart flavors of beet and pomelo. I would recommend that you get an order of bread with this, because you will want it to mop up every bit of the cheese.

The Caesar had a less flashy presentation but another unlikely flavor combination – there was a bit of peanut butter in the dressing. I am a traditionalist when it comes to Caesar salad, but this was a combination that rocked. The fresh anchovy in the dressing, a sprinkle of sesame seeds, and the oils in the peanut butter combined to create a slightly nutty richness that complemented the slightly bitter romaine. It was recognizably a Cesar, the oddest one I have ever had, and one that I want again.

We tried four mains: roast chicken with salted plum sauce, New Zealand Tai snapper, beef tongue curry, and miso ramen. The ramen was relatively traditional and perfectly executed, with a miso-based broth that had a tangy richness. The noodles were what a Japanese restaurant would call medium hard and an Italian would call al dente, and the pork belly had an intense flavor. The only unusual touches were the gentle hint of serrano chile and a little tart lime juice, both of which subtly enhanced the meaty flavors in the broth. 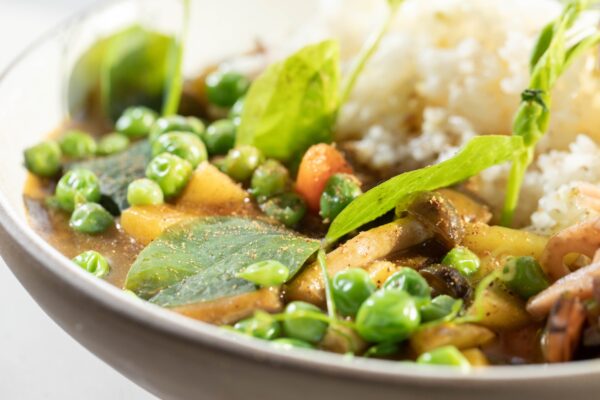 Ryla’s beef tongue curry has the slight sweetness and lighter texture of a Japanese curry, but the more complex flavor of the Indian original.

The beef tongue curry was not what I expected at all, because it was a fusion of Japanese and Indian ideas. Curry was introduced to Japan by the British, who had modified the recipe to make it more bland, and the Japanese changed it further to something almost unrecognizable. At Ryla the thick gravy had the slight sweetness and lighter texture of a Japanese curry, but the more complex flavor of the Indian original. Along with the tongue, which had been slow-braised to tenderness, there were wild mushrooms, chopped pickles, and bits of apple. I have never had anything like this, but want it again.

The salted plum chicken was almost conventional compared to the rest of our meal. The disjointed half chicken had been rubbed with spices and marinated in salted plum wine, and more of that sauce was added at the table with a flourish. The salty and fruity flavors worked, though I might have preferred the sauce to be a bit thicker so it would cling to the meat rather than run off. It was served with baby bok choy with pieces of Japanese pickle, but no rice or other starch.

The snapper, called Tai in Japanese, was roasted and served over a Thai-influenced sauce of coconut milk, basil oil, and mild chillies. A pair of grilled mussels and a small portion of vegetables were on the side, and you’ll want something to mop up that sauce. We chose their sweet potato rice, and it was such a good pairing that I’d suggest including it with this dish.

The drinks at Ryla were every bit as creative as the food, with the stand out being one called Mind Your Peas and Q’s. This had only three ingredients, vodka, aloe liqueur, and pea juice, but was a delightful pairing with food thanks to the sweet pea flavors. We also liked the Wind Up Bird Chronicle, a pisco punch with tiki overtones, and the Sichuan opera, a mezcal sour with pomegranate and subtle chili. They have wines and beer too, but you can get those anywhere, unlike these cocktails.

We tried two desserts, a fine dense dark chocolate tart on a rice cracker crust and a tiramisu that was topped with matcha tea rather than espresso. It was quite unlike any tiramisu I’ve had before, and I think I prefer the coffee flavor as a regular thing but found the innovation very enjoyable.

Ryla has a wide range of price points, from that big bowl of $20 ramen to the snapper at $54 and a New York Strip at $65. For the ingenuity of the dishes and the skill of the preparation, prices are modest. This is a brilliant addition to the South Bay dining scene, and you should go while there’s a chance of getting a reservation without long advance notice.