Of palettes and paddleboards 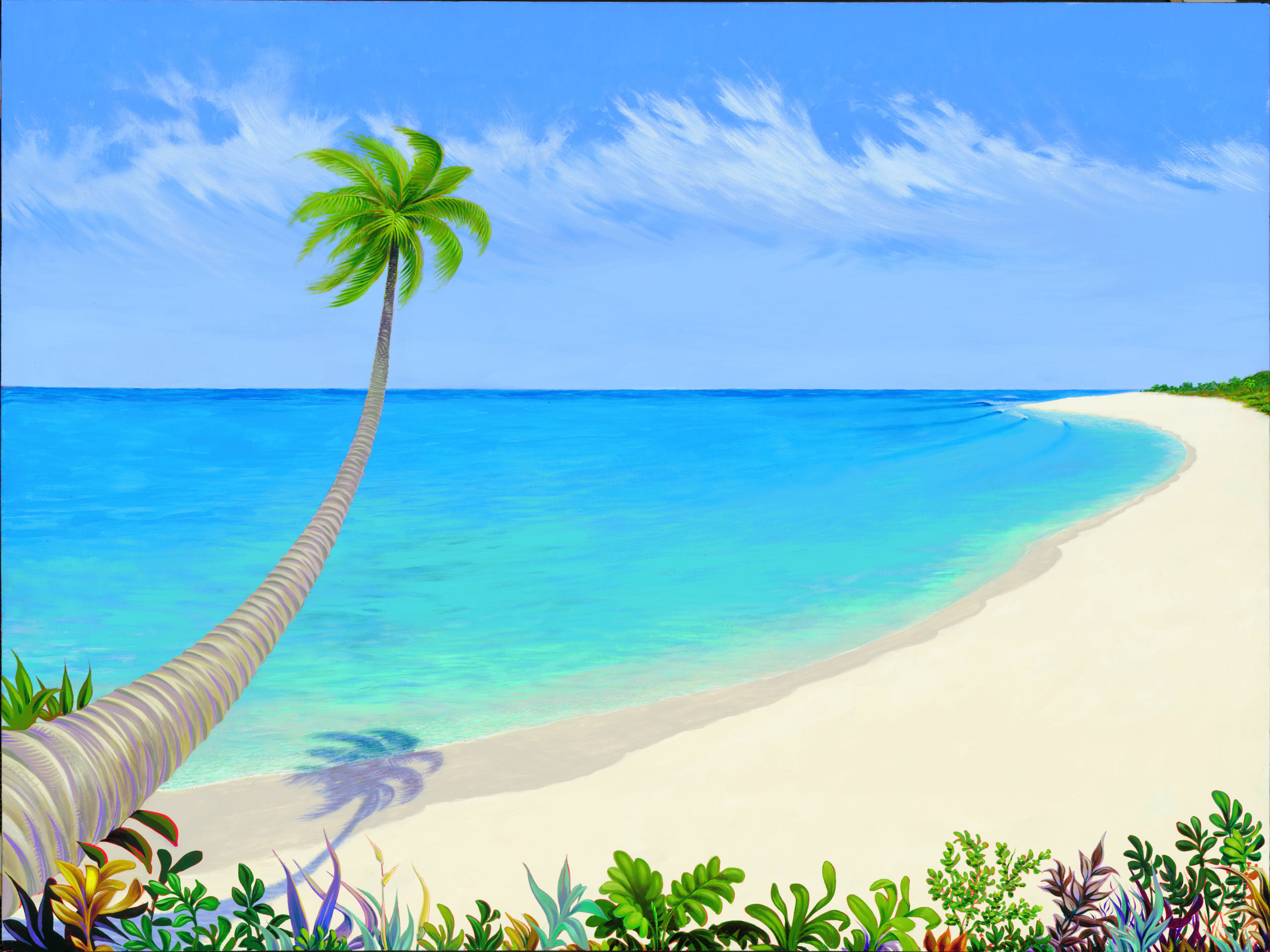 It was my last question of the afternoon, but it might as well have been the first:

So tell me, Zen, how did you get your name? 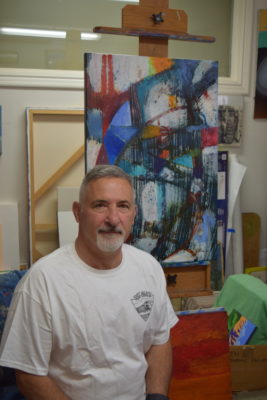 “While my mother was pregnant with me, in 1957, she had the pleasure to see a Zen master named D.T. Suzuki, and she was impressed with his way about him, the way he answered all these analytic and philosophic questions. After the lecture she walked up to him to thank him and he touched her belly and said, Don’t be surprised if you have a Zen baby. And so she thought about it and ended up giving me that name.”

Soon after, Zen Del Rio was born in Mexico City where he lived until he was nine, when his family moved to Malaga Cove and lived near the Neighborhood Church. His mother, Gemma (Zen also has a sister by that name), was an accomplished artist and taught various classes.

“I grew up in her studio learning about art, and I knew early on that I was meant to be an artist.”
In Malaga Cove, and living only a block or so from the beach, Zen picked up another lifelong passion: “My older brother Juan’s friends were surfers and I met some kids from school who were also surfers. So that’s what we did. We were really involved with the sport.”

Zen attended Palos Verdes High School “doing art, and working in my mother’s studio. At that time she was hand-painting tiles, so I worked with her, on murals and floors and signs—all kinds of stuff made out of ceramic tiles. And I did my own work, too; I started painting and drawing a lot.”
Furthermore, being a committed surfer, “I would create and shape surfboards as well, and I would paint them also.”

In the studio, in the water

Zen Del Rio lives in Manhattan Beach with his fiancée, Diana, and his son, Roman, from a previous marriage, but we’ve met on this sunny warm day in his Lunada Bay studio, which he’s had for 20 years. The somewhat compact space fronts a little courtyard that’s just in from Via Anacapa. Years ago it used to be a doctor’s office, and in fact this entire block of buildings, running up to Yarmouth Road, dates back to at least the late 1950s, early ‘60s. 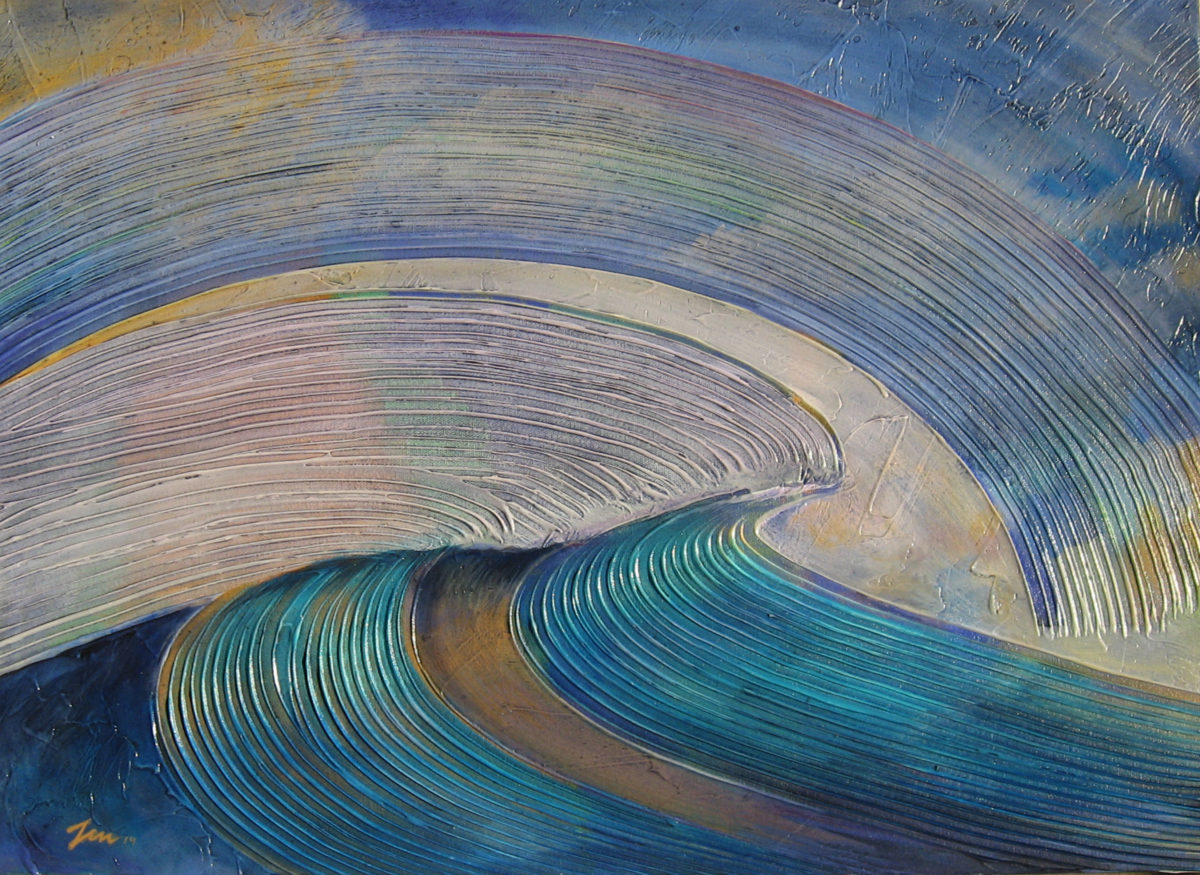 Zen is now making art full time. “For 15 years I was a teacher at Rolling Hills Country Day School, but the COVID virus hit and so they had to do lay-offs.” Asked if he’ll return when the school reopens, he replies, “I don’t think I’m going to go back.”

Nor does he seem too worried about that, pointing out that before the teaching gig he’d freelanced for about 35 years. So what made him take the position at the day school?

“I wanted my son to go to that school. They offered me a job, so I took it, and my son went there from fourth to eighth grade. I just stayed on and taught after that.”

Zen is one of those artists whose style and technique varies; he’s not simply a one-trick pony. On the walls or easels of his studio we’ll see figurative and abstract painting, pieces with smooth texture and pieces with wavy, raised texture. As for subject matter, ocean scenics, or seascapes, is what he does most often. He may begin with plein air sketches or he may step out and take photographs, “and sometimes I just make them up out of my imagination.”

Of all the mediums available to him, paint would be his primary choice.

Are there certain painters who have inspired you?

“I tend to go with a lot of the masters,” Zen replies, “like Michelangelo and Rembrandt, and some of the French Impressionists—Paul Cézanne, Gauguin; Van Gogh…”

I mention that I’m trying to imagine pictures by each of these artists of surfers in the water, catching and riding waves. We laugh at the notion of a surf rider by Rembrandt. 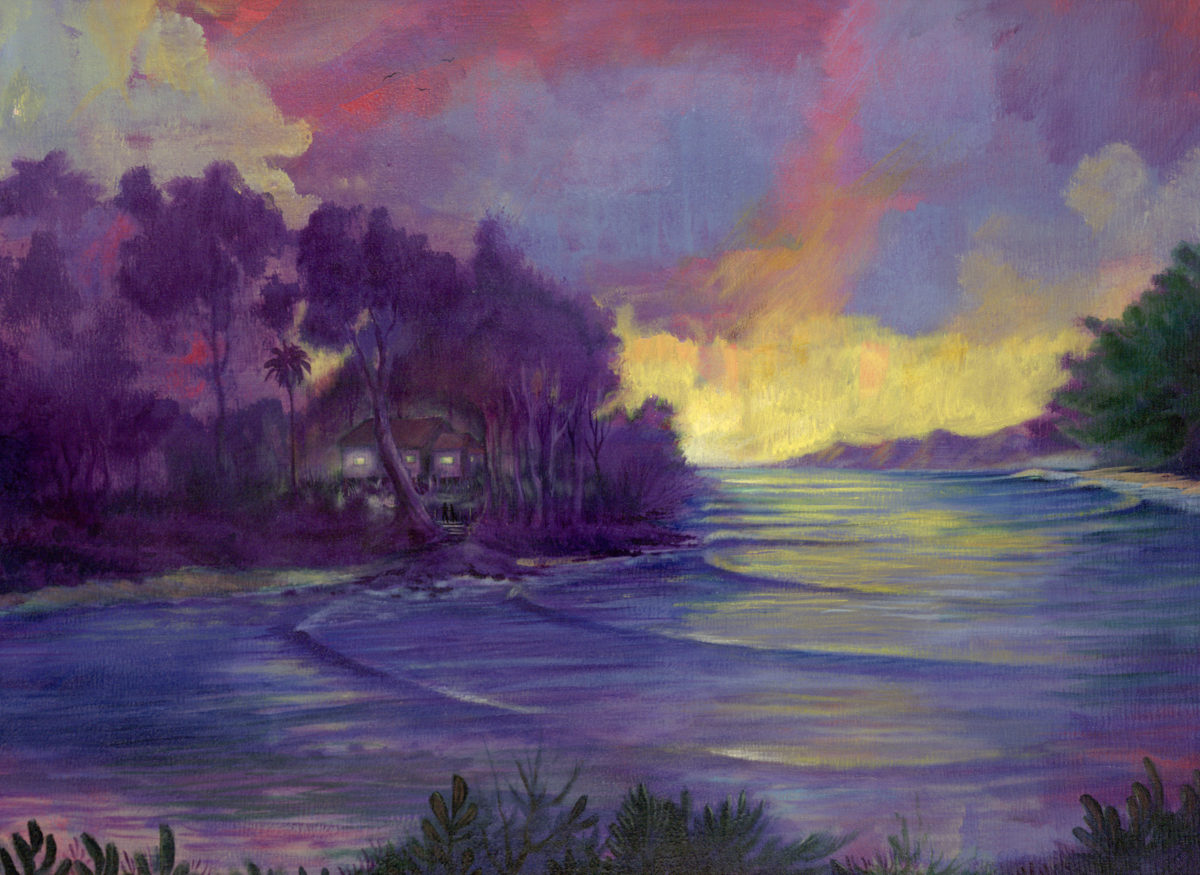 “Meshes of the Late Afternoon,” by Zen Del Rio

Another influential artist was Rick Griffin, who formerly lived in Palos Verdes. Not only his painting, but, early, on, his drawing as well made a big impression on Zen. Of course, it all began with his mother, who not only encouraged him all along but provided access to art supplies. “Just visually seeing her at work, it was a great teaching experience.”

And then there was the time that Zen studied with sumi-e brush painter Dr. Ottah at the Palos Verdes Art Center.

“This was in the late ‘70s, early ‘80s. Before he passed away he was named a Living National Treasure of Japan. He’s what they call a bamboo painter because he lived in a bamboo forest for 25 years painting bamboo. I asked him if he was going to send me to a bamboo forest for 25 years like his teacher did to him. He laughed and said, No, you’re a Westerner, you can’t do things like that.” Zen chuckles at the memory. 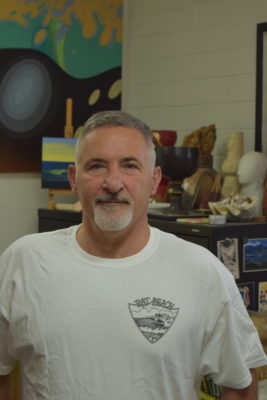 Have your paintings appeared in surfing magazines?

“I’ve been in Surfer Magazine and this other one called Surfer’s Journal,” Zen replies, and our conversation edges over to the sport itself:

“I’ve done a lot of surfing trips,” he admits. “Went to Hawaii a bunch of times, and then down to southern Mexico a lot. For over 30 years I went every year to Puerto Escondido. Some of the best waves in the world are there, and that was the draw. Every summer some friends and I would go and spend the summer there and surf.”

These days, living only three blocks from the water, he and Diana and his son Roman surf in Manhattan Beach. If you stop what you’re doing and look out your window, maybe you’ll see them.

How it gets done

Zen points out that he drives up to his studio every day, and puts in the hours.

“I’m a hard-working painter,” he says. “I put in a lot of time and a lot of care into each painting. I don’t just slosh them out and sell them. Each one means something to me. I like to paint boldly and sensitively—and take risks, and make statements with my artwork.

“I come from a place of gratefulness,” he continues; “instead of asking from it I mainly give myself to the artpiece and let it paint itself: I’m just the hands holding the brush and paint. I’m a kind of conduit of something, and it just appears. That’s why I think my styles are so different; I just let it happen.”

In other words, like many artists who tune in to some inner voice, he’ll often let himself be guided by intuition.

“Intuition (plays) a big part in telling you to shift gears or change colors.” And finally, he concludes, that little voice will also say when to stop, the painting’s done.

I mention that at least one artist I know doesn’t have a plan when sitting down in front of the blank canvas.

“A lot of times I paint that way,” Zen replies. “I start a painting as an abstract, just color sensation and balance, and then sometimes you’ll see something in that abstract and then you paint around it, do the background and foreground, whatever it needs to make it into a subject matter.” 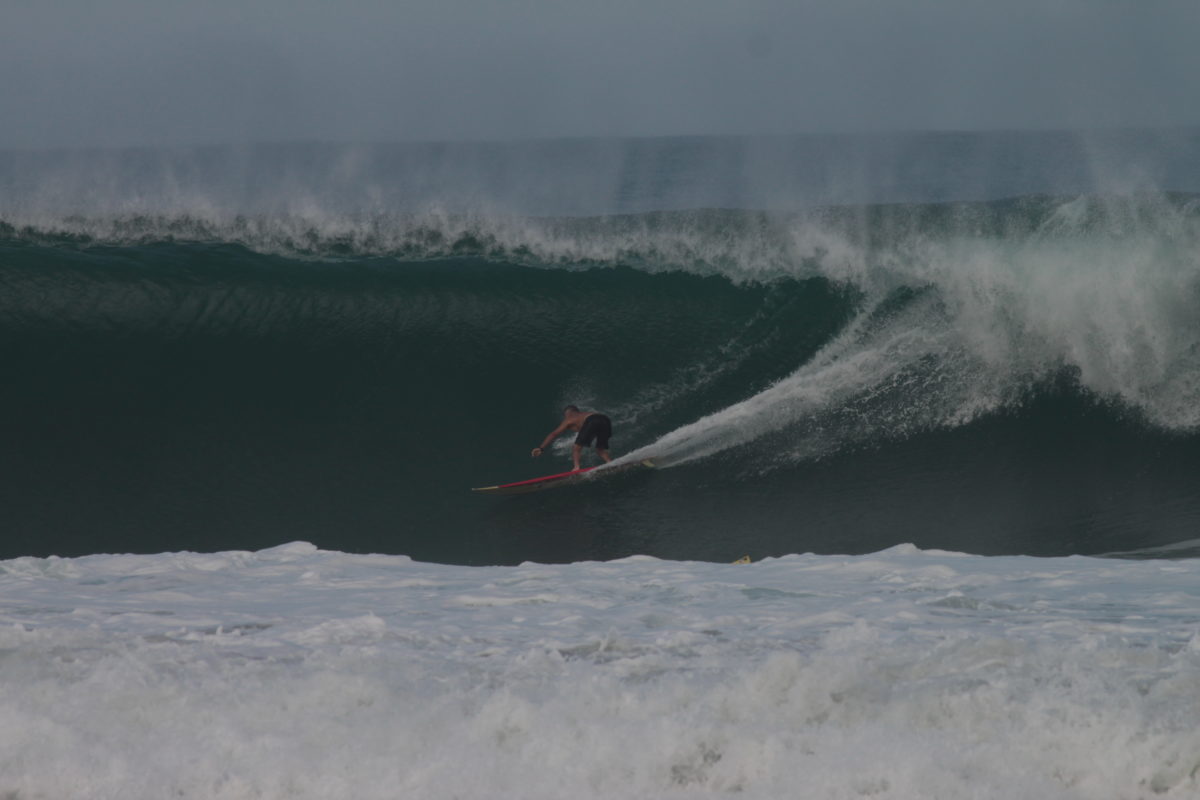 His work is bought by both individuals and by companies. Zen is also a respected graphic artist and sells T-shirts at Annie’s Boutique in Lunada Bay. He’ll paint by commission as well, and on occasion someone comes by with a photograph to see if Zen can reproduce it in oil.

His plan is not only to keep doing what he’s been doing, but to have his pictures become more visible. “My goal is to continue to do custom commissions, my own artwork, and to gather up enough work for a one-man show in a gallery.”

Zen gives art lessons in his studio, and from his years in a classroom setting it’s a fair guess that he’s a patient and attentive teacher. At the moment, he’s revamping his website, and if it’s not up presently, don’t despair; it’s on its way. www.ZenDelRio.com. ER