Off the rails – but that’s a good thing [restaurant review] 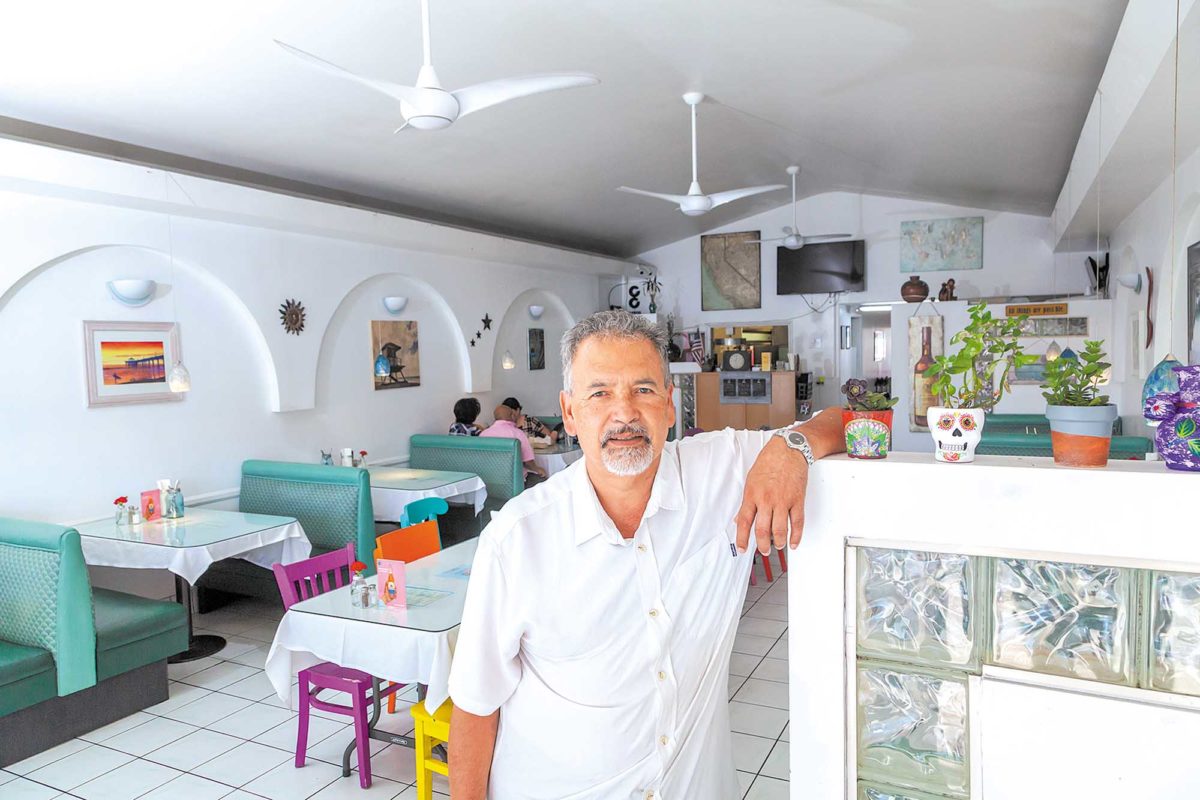 At various times I’ve poked gentle fun at family members who repeatedly go to a restaurant where they always have the same meal. The phrase we usually use is “running on rails,” to indicate no actual decisions are made while ordering. This is despite the fact that I had a guilty secret: when I went to Calimex for lunch, the servers offered menus knowing that I’d refuse them because I’d order my usual: quesadilla especial with bacon, cheese, and guacamole, chicken taco, and iced tea. It wasn’t that I hadn’t tried other things there, but the opposite – over the course of decades I had eaten my way through the menu, and that was a perfect light lunch. The only exception was when I saw carnitas on the specials board by the door, because they didn’t make it often but made it very well.

So it was a shock when I went to Calimex a few months ago and the quesadilla especial wasn’t offered any more. The place had been redecorated, the clutter of beer signs and faded prints was gone, and there was a new menu. There was also a new person bringing that menu, whom I recognized from a very different establishment. Salvador Torres had managed Cafe Pierre in previous decades, and to see him handing out menus and water in this modest cafe threw me for a loop.

Salvador was happy to explain. He’s a managing partner in the business. The original intention was to remodel the building, change the name to Bistro Mundo, and serve South American fusion. That plan was disrupted when a partner dropped out, so they decided to upgrade the space but keep the Calimex name and general concept. The theme of the place is “the colors of Mexico,” which is reinforced by both colored pages on the menu and brightly painted chairs, and it does make the place look more cheerful.

Enhanced environment or not, I had the misgivings you always have when a favorite place changes. I decided to find my new favorite items in the traditional manner, by inviting friends to dine there and sampling from everybody’s plates. After several return visits I haven’t found a go-to item to match my old standby meal, but everything I’ve had has been solidly executed.

To start where everybody starts, the chips and salsa that were a great attraction at the old Calimex are still good at the new one. In earlier days the chips arrived with a fairly mild salsa, and if you asked they would bring out a spicier version. The standard salsa now is moderately zippy, and the one they bring out by request is tongue-searing. If you really enjoy hot sauce, go for it, but the regular stuff is fine with me. 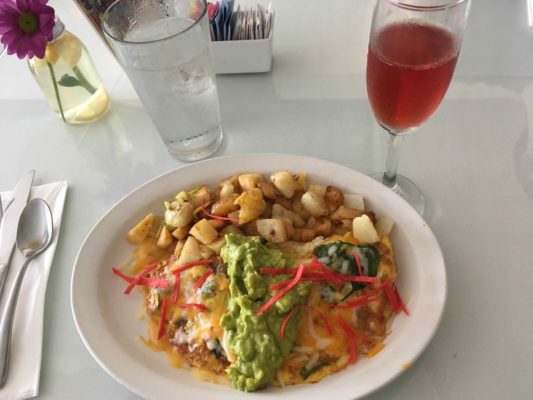 A Hangover omelet and a guava mimosa at Calimex. Photo by Richard Foss

The menu has expanded considerably, and now includes a wide variety of breakfast items and build-your-own omelette choices. I tried the hangover (bacon, cheese, and green sauce) and ranchero (rice, cheese, beans, and pork green chile). Both came with a dollop of guacamole, colorful shreds of red tortilla chips, and simple fried potatoes. Neither sauce was particularly spicy, but a spoonful of the aggressive hot sauce will cure that. They also offer Mexican morning favorites like machaca, huevos rancheros, and chilaquiles, as well as a few standard American breakfasts and better than average coffee. For those who enjoy a little bubbly to start the day, there are also low-alcohol cocktails and your choice of regular, pomegranate, peach, or guava mimosas. Since I regard guava mimosas as an inspired flavor combination, I almost always choose those.

Most wines and beers at Calimex are standard, but one is a standout. I hadn’t tried Bocanegra Mexican dunkel before, but this dark beer has enough spice flavor to pair exceptionally well with the chicken mole. The beer has hints of clove and caramel and is on the light side compared to traditional German dunkels, but fits this cuisine well. Calimex also carries a pilsener from that brewery, and I’ll want to try that on a future visit. 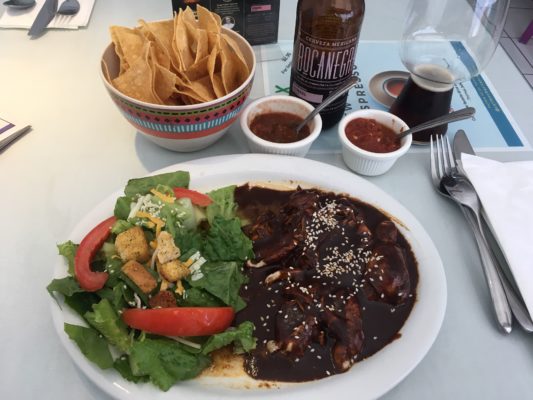 Chicken mole with salad and a very good beer. Photo by Richard Foss

I doubt that a pilsener would pair as well with the mole, though, because that rich, chocolatey sauce deserves a dark beer. Calimex’s mole is lighter and sweeter than some others I’ve had, and it doesn’t have the underlying heat that is cumulative and has you sweating by the end of the meal. It does have the complex mix of sweet, spicy, and richly herbal flavors in a sauce thickened and bittered with chocolate. This is one of the better versions in the South Bay.

One curious omission on the menu is consistent from the old restaurant  – unlike almost every other Mexican restaurant in the area, they don’t have carnitas on a daily basis. On a day that they did, I ordered it on a tostada, which came in one of the showy fried flour tortilla bowls. I prefer corn tortillas as a base, but this was a pretty preparation. The carnitas was tender and porky but lacked the slight crust from frying, and I didn’t taste the cumin or Mexican oregano that some chefs add to give extra depth to the flavor. It was good roasted pork, and that’s what carnitas is in some parts of Mexico.

The only thing that missed the mark was a sope, another item that is made in different ways across northern Mexico. Sopes are very thick cornmeal pancakes that are briefly fried and topped with meat or vegetables or salsa. The one I was served here was a little under-fried and topped with guacamole and a somewhat watery pico de gallo. The flavors were spot on but it arrived soggy and unappetizing. Salvador apologized and said that they’re tinkering with this dish. I hope they keep at it, because I like good sopes and there aren’t that many places to get them.

The menu at Calimex is evolving, and in time may incorporate the more ambitious Latin American ideas that were originally intended. If that happens, this will be the only restaurant offering adventurous contemporary ideas on Artesia between the Beach and the 405. Even if it doesn’t, the new brighter and livelier version of the restaurant is a step forward in a section of town that needs the energy.