Old clothes in a new restaurant 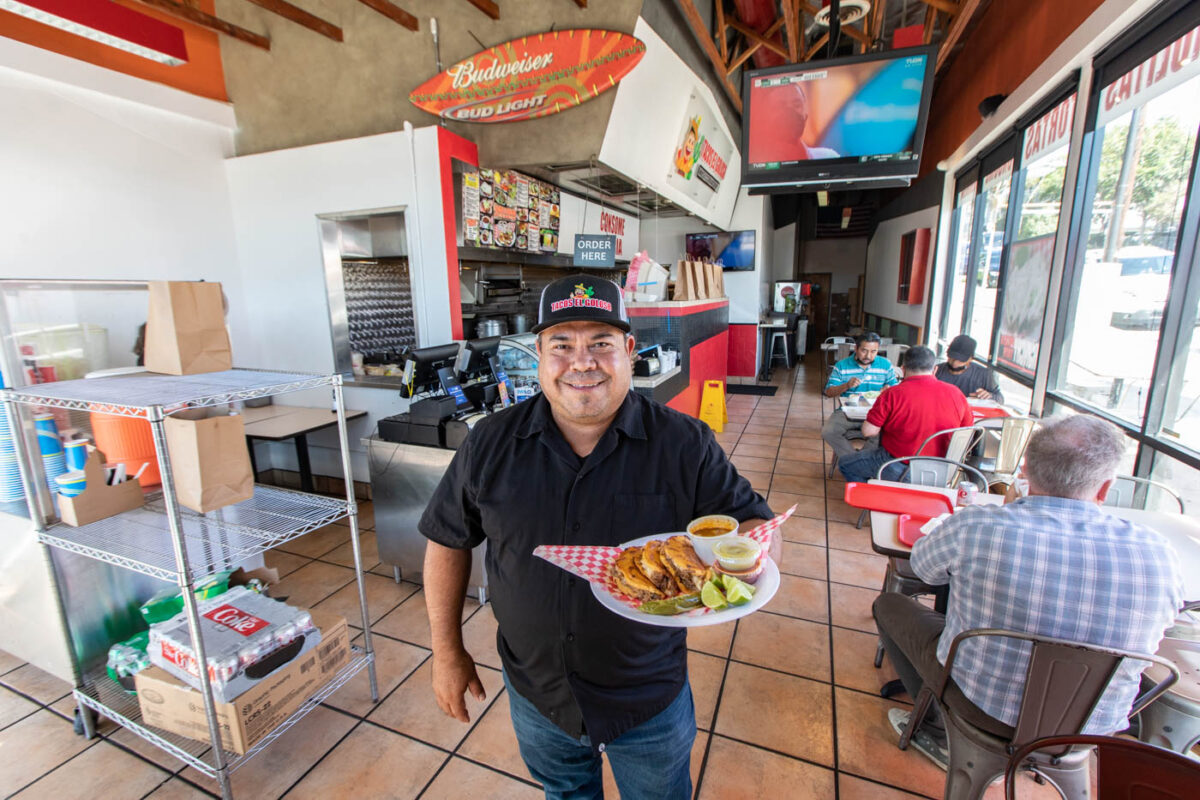 Don’t dress up to go to El Goloso, but do go there

My wife had gone to work on a casual Friday wearing a T-shirt and jeans, and her first question when she got home was, “I remember that we’re going out tonight – do I have to change clothes?” From the tone in her voice, I could tell that she hoped the answer was no. She seemed surprised when I suggested that instead of the nice T-shirt she was wearing, she might want to change to an older one, and maybe put on the jeans she wore when painting the hallway.

After we got to El Goloso, she figured out why I gave that advice. The hole-in-the-mall café’s name means “The Glutton,” and they serve big portions of tasty, messy food. Dressing in older clothes is about practicality rather than style.

The specialties here are from Central Mexico rather than the Sonoran style that is most popular in California, with specialties like birria, crispy potato tacos, mulitas, and vampiros. If you haven’t heard of some of those items, you’re not alone – this is the first place in the area where you can get all of them under one roof.

That roof is next door to Baran’s 2239 on Pacific Coast Highway in the space that used to be Beirut Mix. It’s a counter serve place with limited seating, so if you’re not ordering to go, you may have to wait a few minutes for a table. You’ll probably want that few minutes anyway to figure out what you want, because the menu is visually cluttered and mounted inconveniently above the kitchen. If you prefer a much more readable version without the pretty pictures, the online version is easier on the eyes. You’ll want to have your order in mind when you get to the counter, because it’s rare that this place doesn’t have a line.

Kick back, sip your soda or juice, and watch the fútbol game on TV, because almost everything on the menu is fried to order and takes a few minutes. Forget the idea of appetizers and entrees, as they will all arrive at once.

So what should you get here? The house specialties are potato tacos and birria tacos dorados, and they’re a good start. A taco filled with mashed potatoes doesn’t sound particularly complex, and it isn’t. This is peasant food, a crisp shell filled with mashed potatoes with mild seasoning, topped with lettuce and cotija cheese. A tangy tomatillo sauce and a lime are on the side, as is a cup of consommé – more about that later. The potato tacos are a simple pleasure that is best enjoyed as a counterpoint to something zesty and spicy like the birria. You can get the birria in a burrito or bowl or in tacos dorados – the 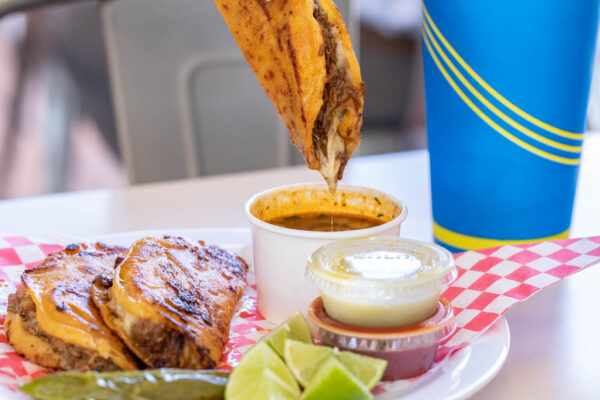 Mexican style of shallow-frying tortillas after filling them, which is nothing like the crisp, dry, and bland versions from Taco Bell and their ilk. Birria is a savory stew with an underlying heat from chili peppers, and in case a taco full of stew wasn’t messy enough, they serve these with gooey, delicious melted cheese along with cilantro and onions. There’s really no way to eat a somewhat greasy taco filled with stew neatly, but you’re not here to engage in an etiquette competition. There’s more of that consommé as a dipping sauce for the tacos or your chips, but I like drinking it with just a squeeze of the lime. It’s a rich, thick bone broth with a spicy kick, and one time I took some home and combined it with ramen noodles. It suggests the next Mexican-Japanese fusion cuisine, because writing about it makes me want it again.

Other must-try items are the mulitas and vampiros. Mulitas (little mules, and no, I don’t know why) are a pair of toasted tortillas filled with melted cheese, onion, cilantro, guacamole, and your choice of meat. If you think of it as a sandwich made with thick tortillas, you’re right. Vampiros are similar except that the tortillas are crisper and along with the meat, cheese, and onions you also have lettuce, cotija cheese, and sour cream. The reason they’re called vampiros is that the meat inside is traditionally tossed in a pungent garlic sauce, so eating one of these protects you from vampires. They might have been invented in honor of the 1957 thriller “El Vampiro,” a triumph of horror cinema, and were probably first made in the early 2000s, but nobody knows for sure. What is for sure is that they’re a great bundle of different textures and flavors and like the birria tacos, they’re a mess to eat.

We had the carnitas in the mulita and the al pastor in the vampiro, and enjoyed both. The carnitas here is finely chopped and has more seasoning than the version generally served locally, which is often big chunks of roast pork that have been briefly fried. El Goloso includes some cumin and oregano that adds to the depth of flavor. The al pastor has even more zip from spices and is on my list of things I must get when I return.

Nothing at El Goloso is priced above 12 bucks and most are much less, and this is certainly a place where you get a bang for your buck. You would have to be a glutton indeed to spend more than 20 bucks per person here. It’s good, fairly fast, and cheap – put on that old T-shirt and the gardening jeans and head on over. They plan to open another location closer to the beach soon, so at that one you can wear your swimsuit and just run into the surf afterward.